by Souperchef Anna on October 7, 2015 in Bhutan, Travels 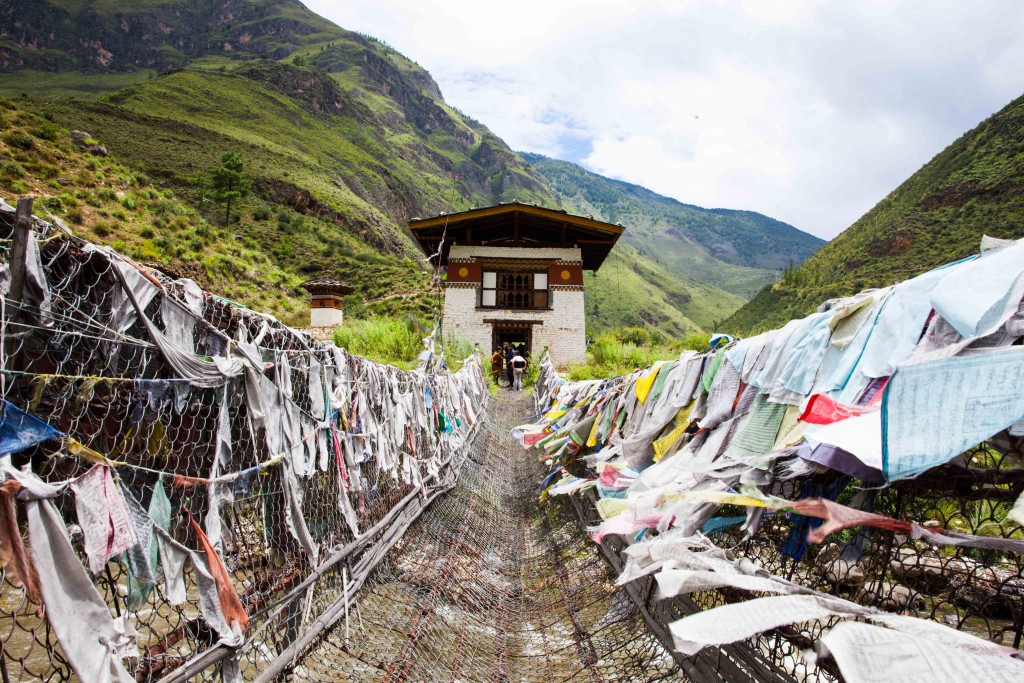 Fluttering prayer flags on an iron bridge on the way to a stupa in Paro. Stupas, temples, monastries and dzongs pepper the whole kingdom, and are spectacular sights to behold.

Culturally, Bhutan is unquestionably spiritual, and it’s difficult to traverse without passing through a Dzong on a nearby mountain. Dzongkha is Bhutan’s official language and ‘dzongkha’ literally means ‘the language spoken in the dzongs and administrative centers in all the districts of Bhutan’. Such is the level of significance dzongs command in Bhutan!

More than just a temple, a dzong is a fortress-like structure that once served as defence against invaders, but now continues to be used as the headquarters of a district monastic body and administration. As you might have already known, all tourists (excluding Indian, Bangladeshi and Maldivian passport holders) to Bhutan require a visa and must book their holiday through a Bhutanese tour operator or one of their international partners, who will take care of Visa arrangements for visitors. Many tour operators are eager to showcase the extraordinary dzongs, monastries and temples and stupas with their rich mythical origins and architectural wonders, and here, we share some of these uniquely Bhutanese spiritual buildings we’ve had the privilege of visiting. And we show you how you can get Dzong-ed out, but you don’t have to. 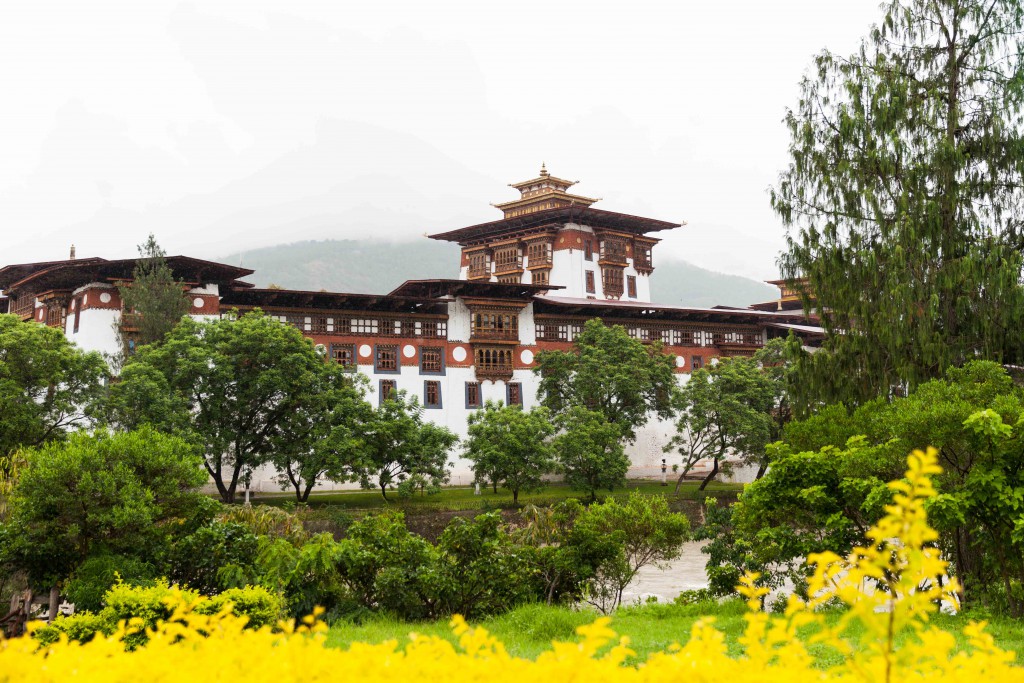 Arguably one of the beautiful dzongs in the kingdom, Punakha Dzong tells of ancient stories and truimphs. The Punakha Dzong has weathered several disasters like flood and fire, and much has been rebuilt in 2003. Inside one of the temples that depict the life of Prince Sidharta, you can see many pillars built out of copper hammering and walls with painted motifs. These motifs used to use mineral paint powdered from red stone that can last for many years. However, as mineral paints are typically duller in tone, chemical paint is now used to show more vibrance. Such chemical paint aren’t as lasting so regular maintenance is required.

The door leading into the Punakha Dzong.

Ugyen’s passion in his country and work shines through as he guided us through the different buildings in this dzong, rattling off numbers and dates and names committed deep in his memory. 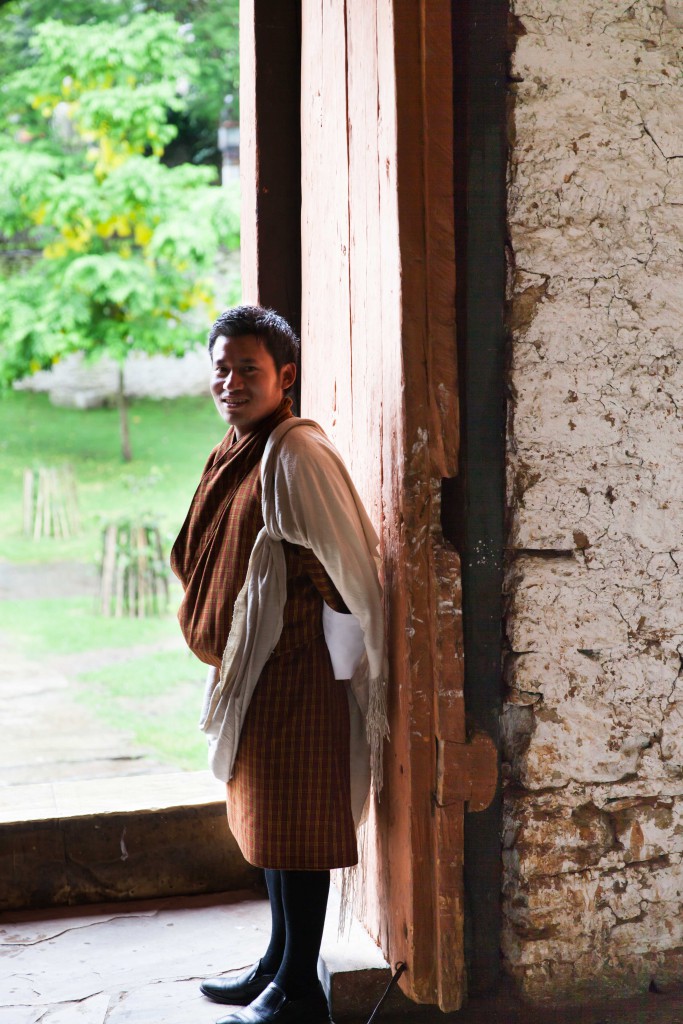 We were so impressed with Ugyen’s knowledge of the history of the various Dzongs in Bhutan!

I was particularly intrigued by his story about the southernmost courtyard with the temple that houses the remains of Pema Lingpa, a famous saint and siddha (accomplished master), as well as of Zhabdrung Ngawang Namgyal, the most important unifier of Bhutan as a nation-state. Ugyen regaled the story of how the Zhabdrung died in Punakha Dzong in 1651 and his body was preserved in the Machey Lhakhang (machey means ‘sacred embalmed body’). Due to political struggles, the local governors conspired to keep his death secret for more than 50 years, issuing orders in his name while claiming to the people that he was on a retreat. Till now, the casket is sealed and securely guarded. We saw two guards at the entrance of the temple, and apparently, other than two guardian lamas, only the king and the Je Khenpo (The Chief Abbot of the Central Monastic Body of Bhutan) may enter the room. 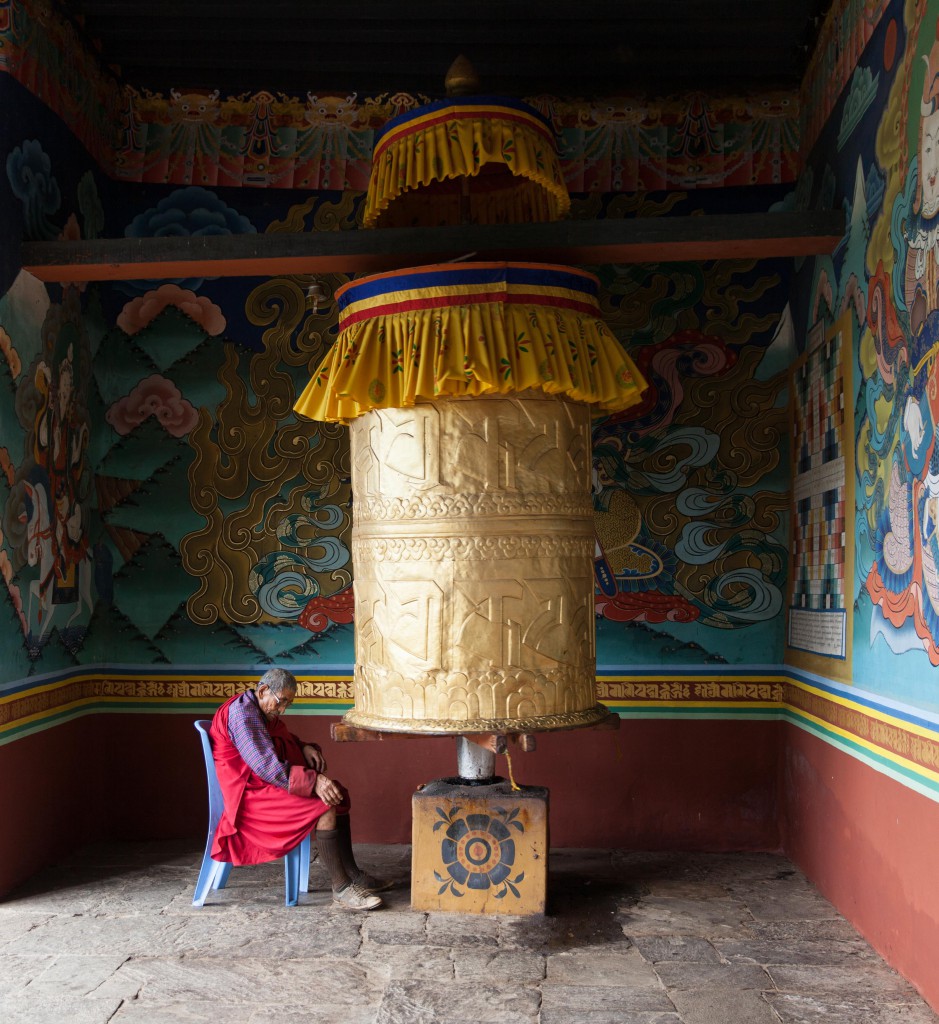 An elderly man at the large prayer wheel in Punakha Dzong. 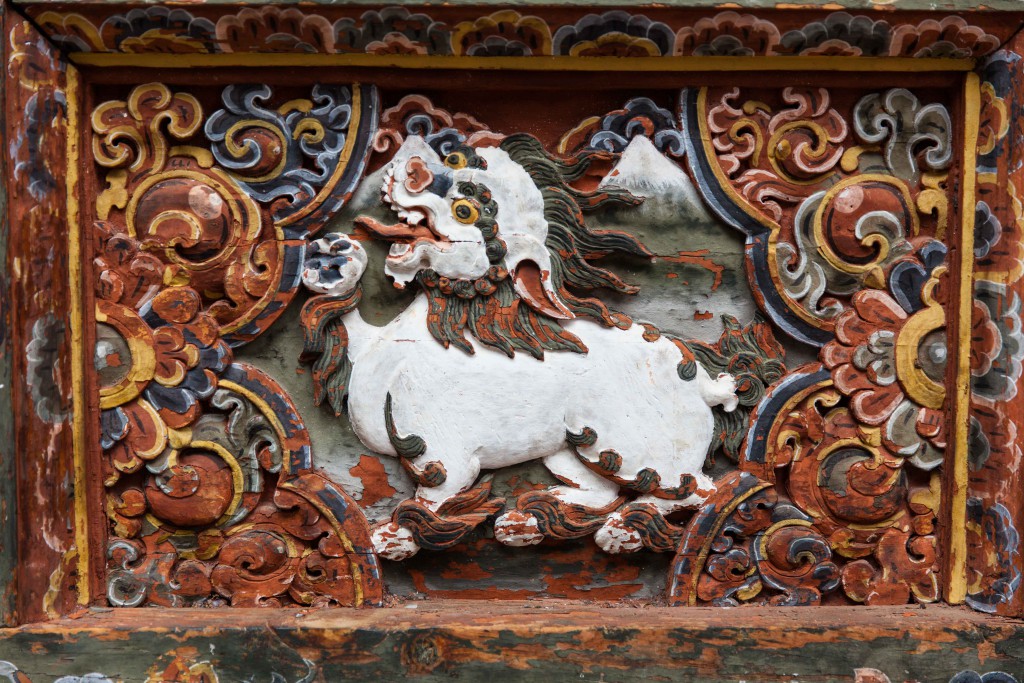 A close up of the many motifs in the Punakha Dzong.

Be prepared to spend a while here to appreciate the spiritual dimension and the political nuances that have shaped Bhutan so significantly!

The regal Khumsam Yulley Namgyal Chorten perched high on the peak of a hill in Yambesa, 7km north of Punakha, is a story of peace and harmony. Dedicated to the stability and peace for the kingdom of Bhutan and her people, this chorten is exemplary of the Bhutanese architecture, especially given that it was built based on the holy scriptures of Bhutan, rather than engineering manuals. The hike from the bottom of the hill is scenically green, rice paddies and produce aplenty. Each of the four levels of the chorten (a stupa, usually containing sacred relics) houses artistic creations of the deities worshipped by the Bhutanese.

The highlight for me has to be the incredible view of the terrace atop the chorten. I took out my camera to greet the valleys of green below, but the scene was something beyond what technology could capture. I kept the camera, and took the view in. I’ve got freshly-picked avocados in my bag, stories in my book, wind-ruffled hair brushing my face, and the peace that Bhutan never fails to give. 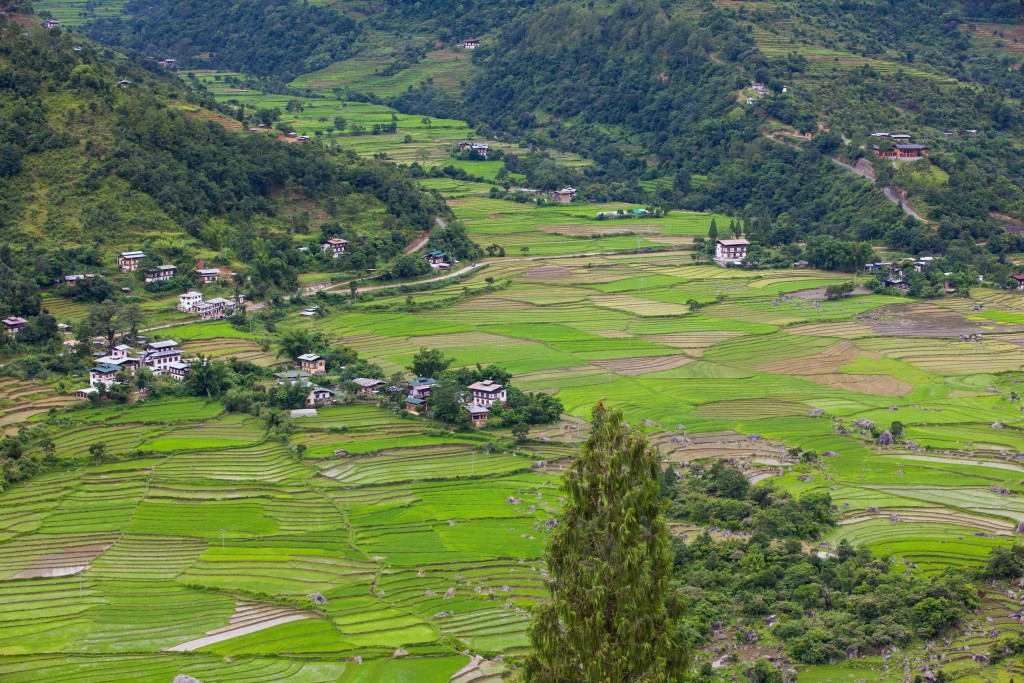 Houses miniaturized at the top of Khumsam Yulley Namgyal Chorten. 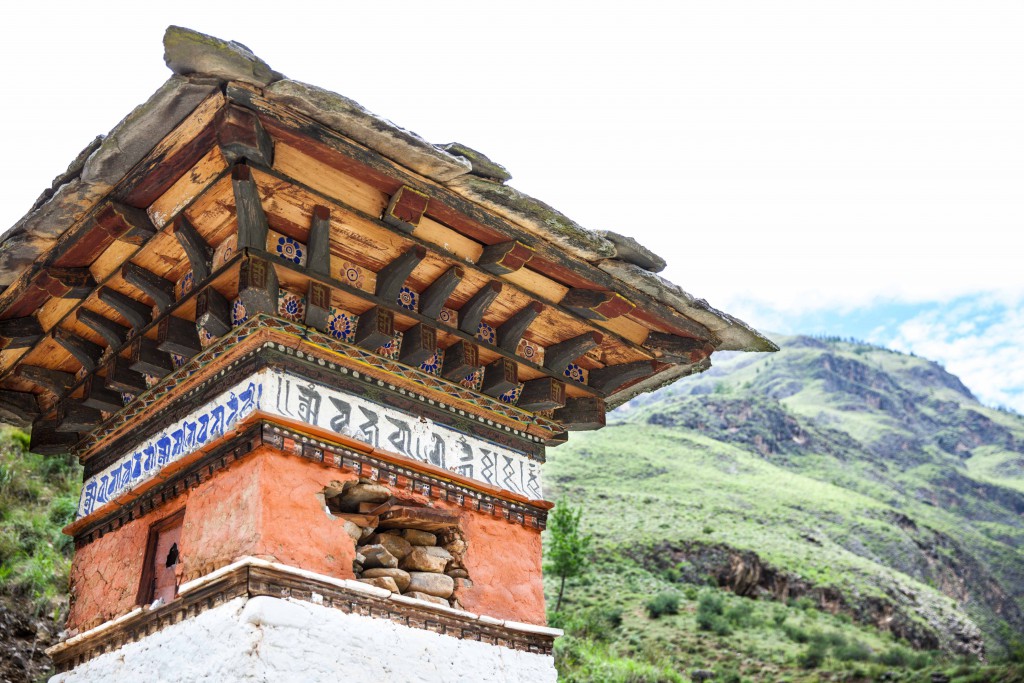 One of the stupas in Paro.

We met many fellow vistors on the way, and as a fellow traveller put it, “After a few days, I’m all Dzong-ed out!” Many Dzongs are worth visiting for their architectural prowess and artistic traditions, but don’t hesitate to speak to your tour operator if Dzongs aren’t really your entire idea of exploring the elusive Kingdom of Bhutan. Our tour operator, Druk Asia, was particularly sensitive to our needs and purpose of the visit, and has created bespoke trips customized to our requirements. You can get Dzong-ed out, but you don’t have to. We aren’t, and are souper thankful to have learned so much from our experienced guide, Ugyen, all thanks to Druk Asia! Check out also DrukAir, Royal Bhutan Airlines who have brought us safely and royally into the splendour of Bhutan!