Our Souperholic programme is currently offline due to ongoing maintenance. Login access, awarding and redeeming of Souperholic points are unavailable during this period. We apologise for any inconvenience caused.

by Souperchef Anna on October 6, 2015 in Bhutan, Travels

Our Bhutanese farm-to-table journeys were marked by many amusing stories, thanks to wonderful travel companions and a humourous guide and driver. I’m souper glad to be able to return to these photos and travel journal that cemented the light-hearted moments in our memories. Join me, please! 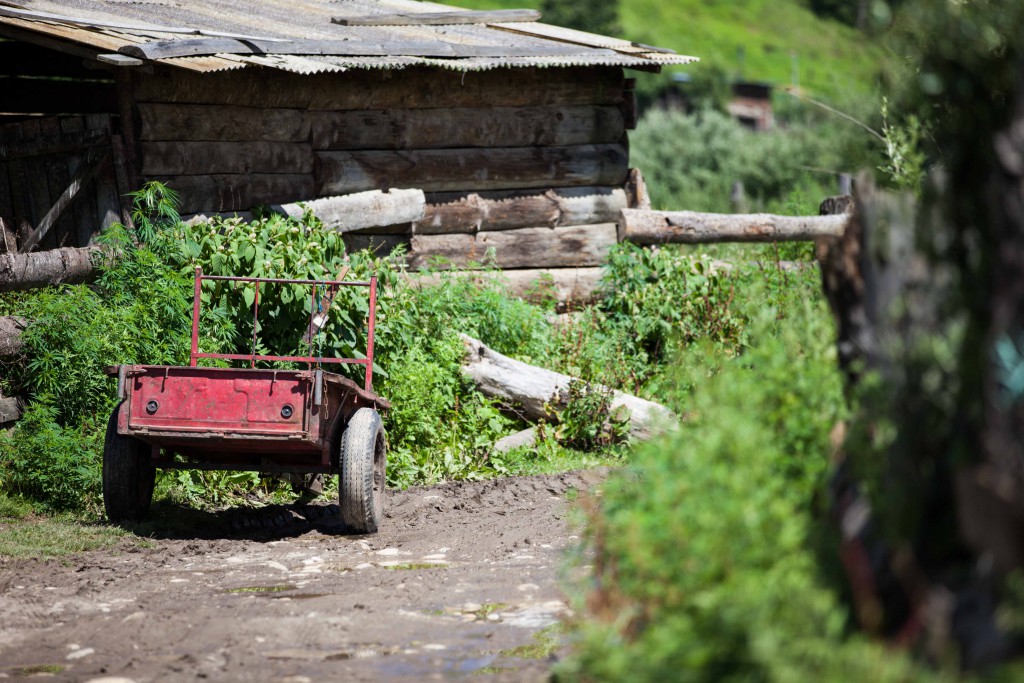 A cute tractor we saw in Bumthang, the trusty worker for all farms.

In Bumthang, we spent magical mornings in open fields and muddy trails. Short hikes became longish, and long hikes, oh well, became longer, mostly because we took thousands of photos and were inquisitive about everyone and everything. Our first farm trail in Bumthang was particularly memorable. The rain had just fallen the night before. Paths were muddy, rocks were loose, and the greens glistened with morning dew and rain residue. Birds swooped in, the scarecrows not quite working. I was intrigued by everything I saw. And as I got distracted by something that I really couldn’t remember now, I heard a ‘squish’ and yells of “Noooooo, Anna!”

The green mines of poop that laid along all trails!

The cattle poop were like land mines. The cows range carefreely, and also defecate freely. I have tried my best along the entire trail to avoid these green mines, but all it took was one single moment of distraction to land in one! 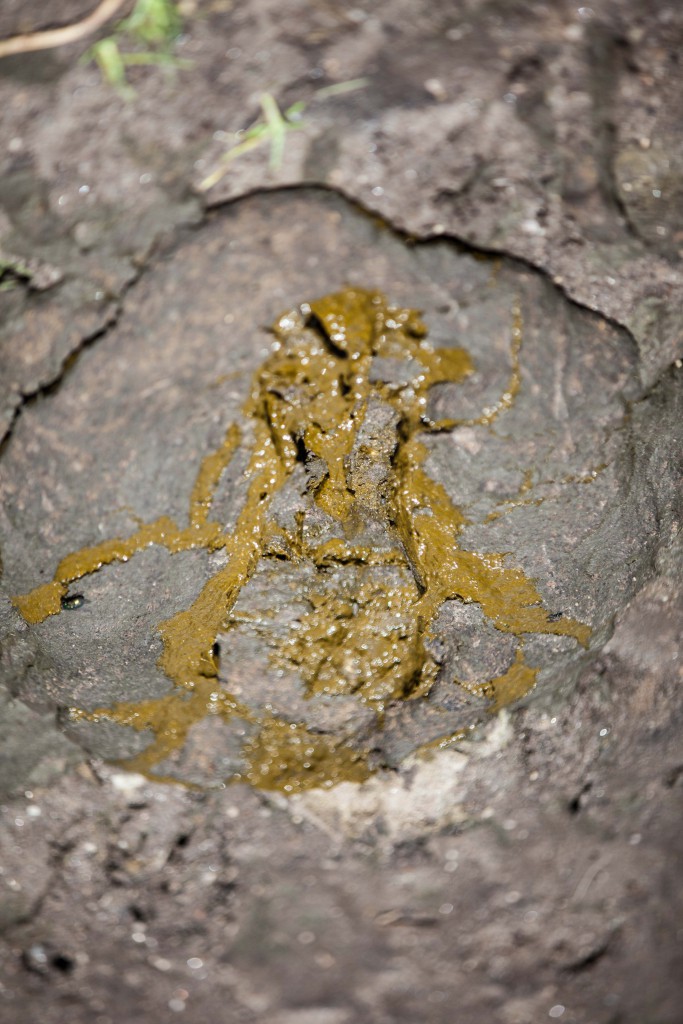 What do you see? We see a penguin in the poop!

See the artistic mark of my shoe on poop – “It’s a penguin!” my husband quipped enthusiastically. I hiked on, allowing the laughter of my travel companions ring on around me. The ever kind Ugyen led us to a stream with crystal clear water cold and fresh. “Here, Anna. You can wash your shoe here!” I looked at him, dropped my jaw slightly. “Cannot! The water is so clean, I don’t want to dirty it!” He grinned and remarked, “This is Bhutan. We use stream water to wash things, including shoes with cow dung!” Then, he dipped some tissue in the stream, and meticulously wiped my shoe clean.

All dung-free once again, we continued the hike. I was enjoying the gradual climb up when I heard a familiar cry. I turned back and saw my husband looking down at his shoe, part amused, part resigned. It was his turn to step into the mushy green cattle poop! And my turn to laugh! So back we went to the stream. And we learned a lesson alright – look before you leap. Unless stepping into poop is your thing!

Tiger’s Nest is perched some 3000m above sea level, precariously clinging on to granite ridges. It’s a beauty, in and out.

The Taktsung Palphug Monastery in Paro valley, popularly known as Tiger’s Nest, clings to a granite cliff more than 3000m above sea level. Legend has it that the Guru Rinpoche flew here from Tibet on the back of a tigress, and this monastery was consecrated to tame the demon. Guru Rinpoche was also said to have meditated in a cave here for three years, three weeks, three days and three hours in the 8th century.

The hike up to the monastery was steep with some eight hundred or more steps of irregular height towards the end, and can be somewhat exhausting in the high altitude and thin air. I have trained for marathons before, so this hike was rather manageable, but remember my earlier lesson about looking before leaping? It applies here – the going can get tough if you don’t keep a comfortable pace! I have seen a few pale faces that have honestly shaken my confidence!

Our hike to Tiger’s Nest had to be postponed till afternoon as our internal flight back to Paro was delayed. We were advised to make the climb early in the morning actually to avoid the afternoon sun that can be mercilessly harsh in the high mountains. That day, the sun was mild, thankfully, and the skies held clear as we began our ascent up. We waved hi and bye to fellow climbers, some in small groups, some in big families. I noticed how some of them were not even wearing proper hiking gear, but skipped around in slippers and even saris. I was properly geared – surely I can conquer the Tiger’s Nest with ease! 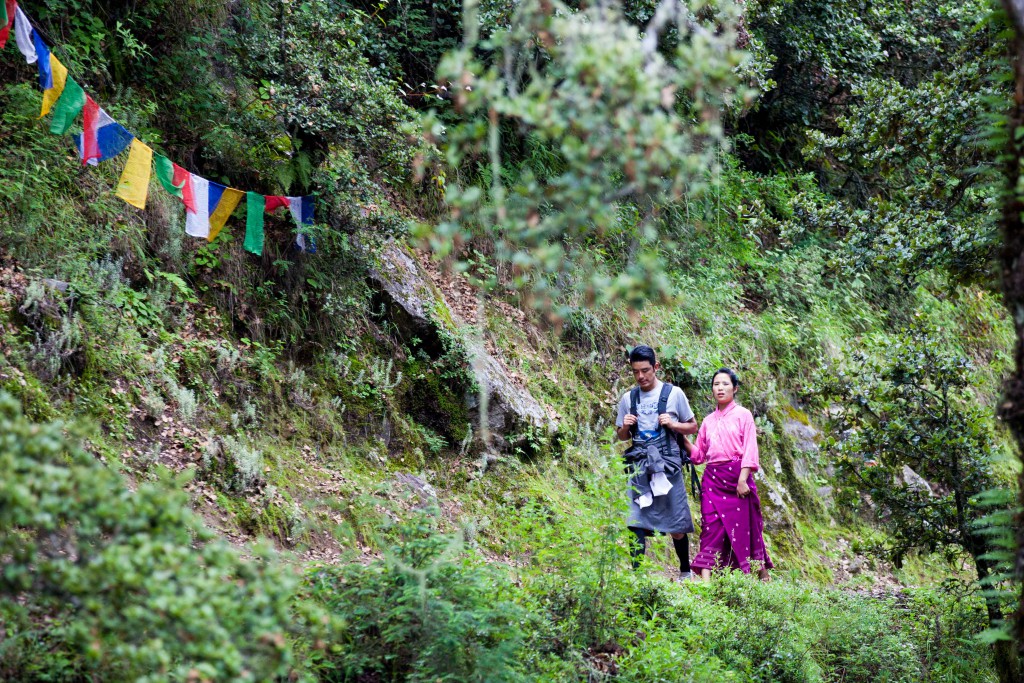 Fellow climbers. It is said that every Bhutanese will make a climb up to the revered site of Tiger’s Nest at least once in their lifetime.

As the shone shone down and the air got thinner, my pace slowed down further, my knees wobbled as we passed by yet another climber on the descent, looking rather defeated. I held back my grimace as my thighs burned on. Surely the view was going to be worth it. 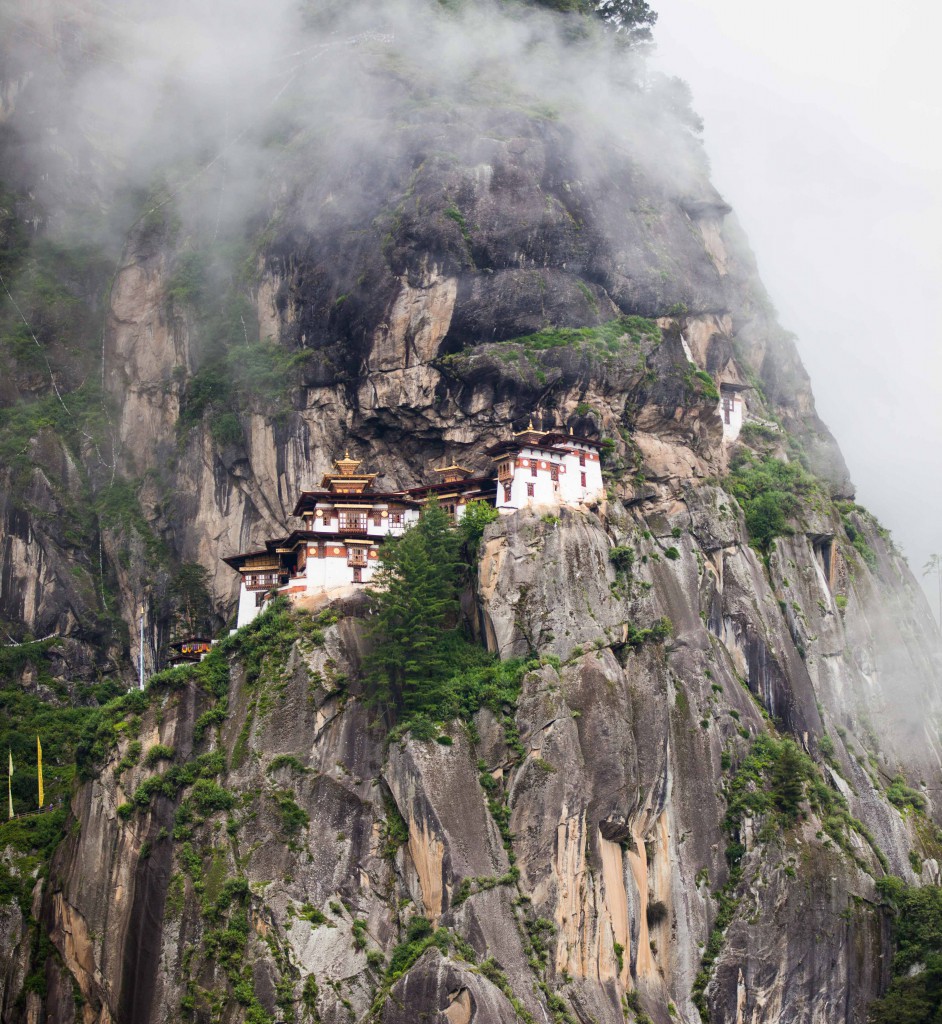 So close yet so far – one of the views from the vantage point.

At the vantage point, thick clouds covered the horizon – I got a little dismayed at first. Misty and dreamy as it was, the vantage point was supposed to feature the legendary monastery, not balls of clouds. But before I could be further disappointed, strong winds blew over, and in the next minute, the revered site was within clear sight again. 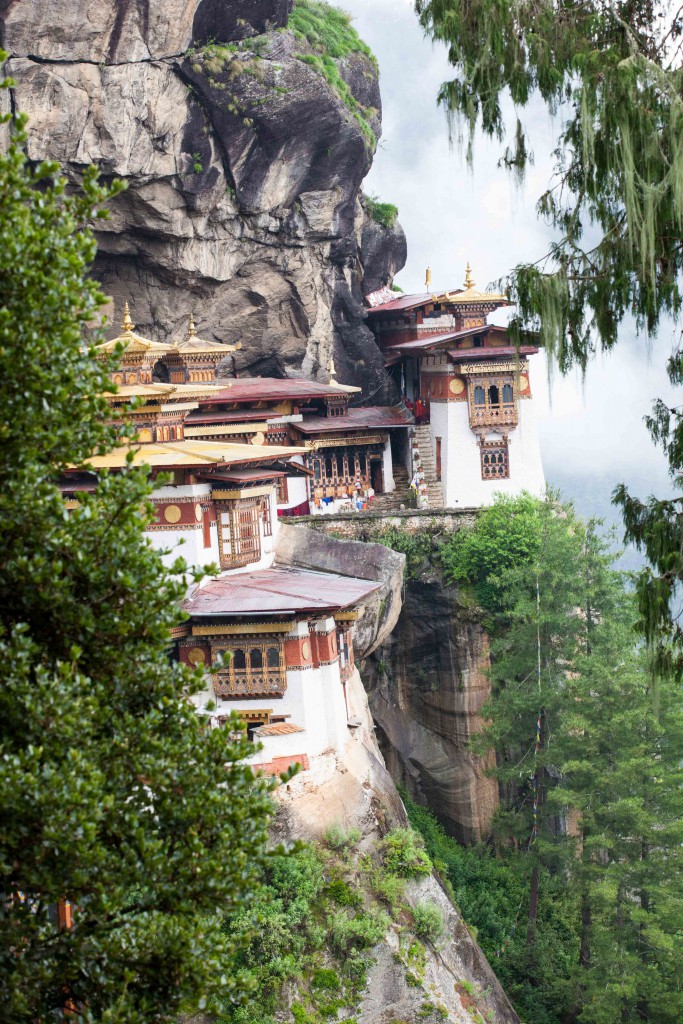 Beautiful no matter which angle you look at it from!

It was extraordinary. Legendary. I will go through the climb again in a heartbeat just to have this view again! 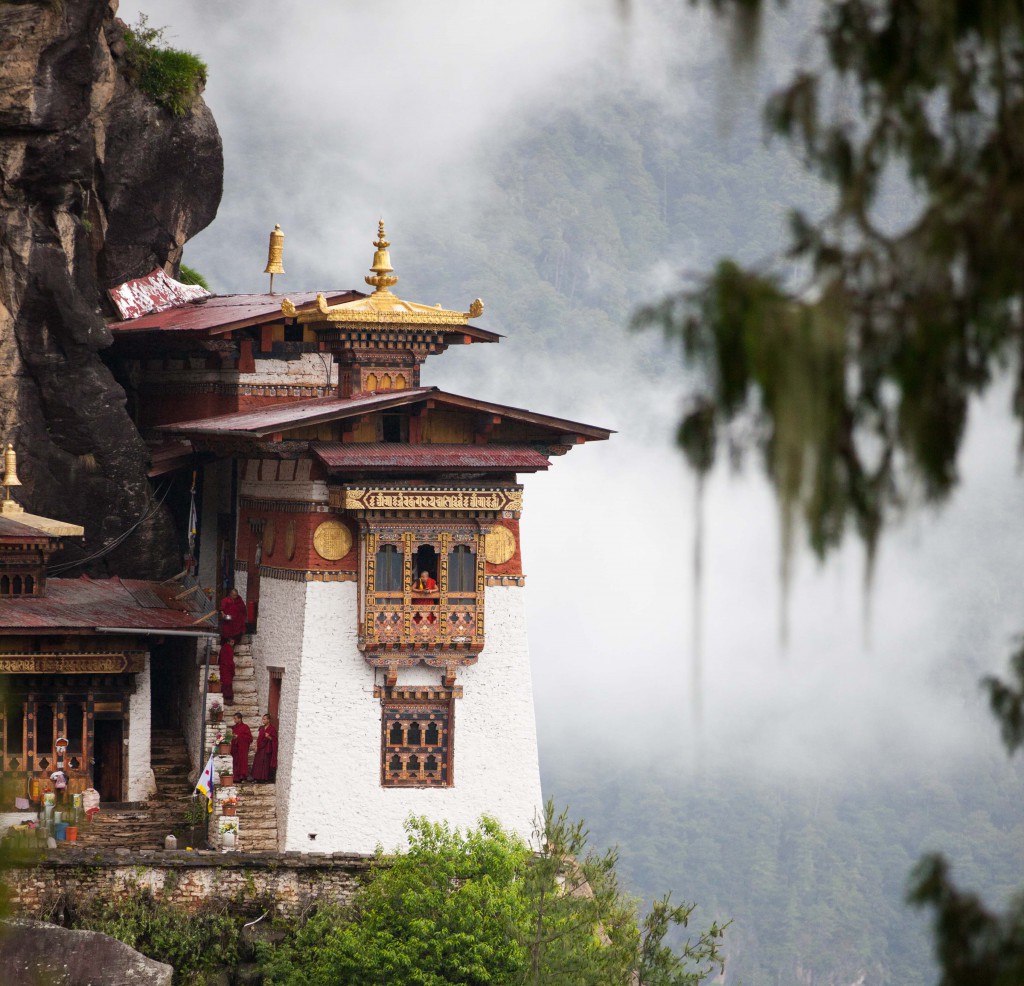 Surreally regal – our view of Tiger’s Nest from the vantage point.

As Ugyen had just guided a group who were there for a bridal magazine photoshoot, he gamely showed us the poses he learned, at the exact spot the model had posed just a week before we came! Look how coy he was! 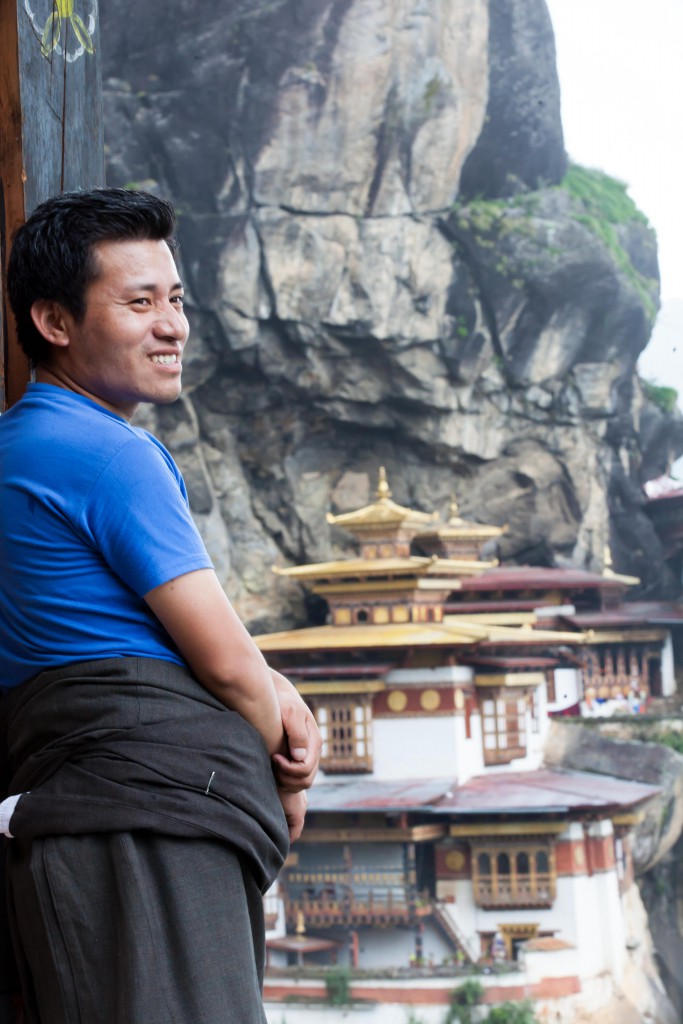 “You must pretend not to look at the camera, and smile!”
~ Ugyen, the pretend-model

The notoriously treacherous last steps before we reached the monastery took every ounce of my energy, and was I glad to have a slow tour inside!

A Bhutanese in her kira making the last few steps towards Tiger’s Nest. 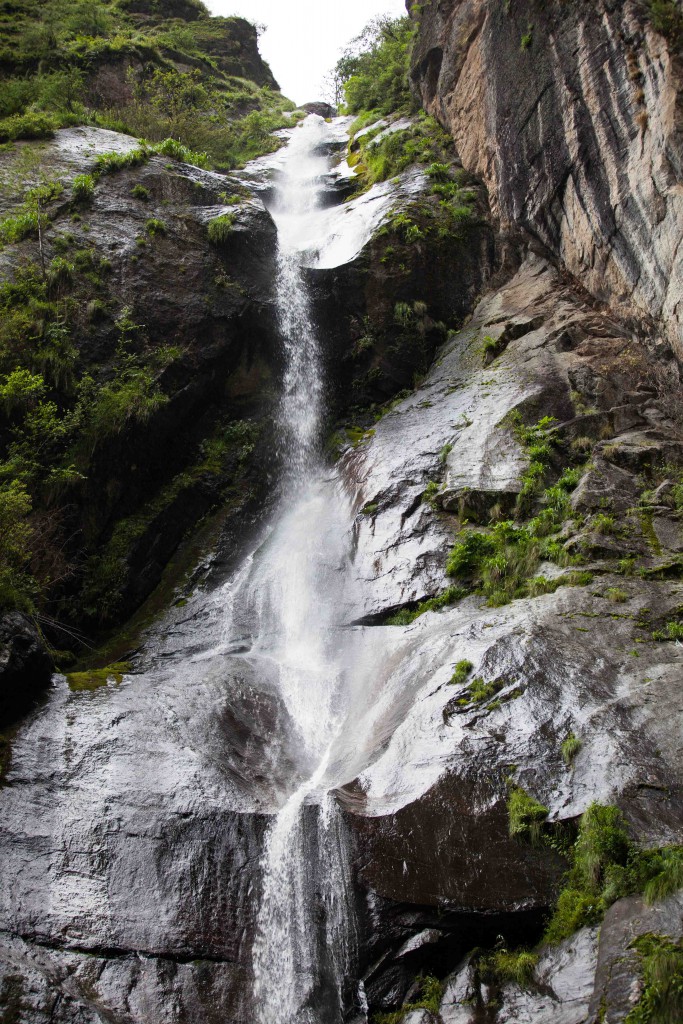 The waterfall near the monastery, majestic and loud, creating a comforting cool mist as we crossed the bride in front of it.

Security was tight inside the monastery. We were told by Ugyen to wear and zip up our jackets and be in long pants as reverence to the holy site before we headed in. Visitors were not allowed to bring in any cameras, phones or electrical appliances. My husband’s camera belt had to be left at the security counter as well. Interestingly, the policemen thought the belt was a pistol belt and asked my husband if he were a fellow cop! They even tried on the camera belt! You just have to love the Bhutanese sense of humour and geniality!

Outside the cave where Guru Rinpoche was said to have meditated, a picture of him was displayed, and Ugyen explained that from a particular angle from the vantage point, you can see how Tiger’s Nest was built to resemble him. I made a mental note to view that on the descent. A monk watched over the door sealing the cave. According to Ugyen, it is opened only once a year, and devout Buddhists and visitors from all over the world make early climbs up to witness the special ceremony and be blessed. In his more than 450 climbs (450!!!!!) up Tiger’s Nest, Ugyen had only witnessed the ceremony once, and he queued for about two hours to get into this cave!

After touring a couple more temples and witnessing the monks assembling together for a prayer session, we began the descent. Back at the vantage point, I struggled to make out Guru Rinpoche’s face. “There, Anna, can you see? Those are the eyes at the top,” Ugyen patiently directed me. For some reason, I thought of how Rachel Green in one of the F.R.I.E.N.D.S. episodes was unable to make out the foetus in her sonogram, and couldn’t help but laugh at this similar situation. “I can’t see! I really can’t!”

The face of Guru Rinpoche appearing from this view of Tiger’s Nest!

And then, I could. Unmistakably, the face of Guru Rinpoche on the surface of the Tiger’s Nest. The Bhutanese are architectural wonders!

We left the monastery in the mountain in its pristine pride. The clouds slow-danced on.