From Sant Sadurni d’ Anoia, we proceeded to Barcelona. Blessed with warm weather more than six months a year, flanked by the ocean and the Pyrenees, great nightlife and culture, dozens of parks, good museums, and a very cosmopolitan population,  Barcelona is a true metropolis. This timeless Mediterranean city is also one of the most popular travel destinations in the world, with many flocking the city to visit Gaudi’s works, eat not so traditional paella and sip expensive sangria.

We spent 5 days in Barcelona. We took our time to explore the city by bus, foot and subway. A great way to explore the city is to take the hop on and hop off tourist bus on a 2 day pass. It gives a really good overview of what Barcelona has to offer and with the audio guide, there was a short presentation of the places of interest and their significance as we rode past. I thought I would just highlight a few that we visited since this is not exactly a full travel blog.

Barcelona is filled with the works of Antoni Gaudi.  Antoni Gaudi was born in 1882 in Catalonia. He was born of humble roots and his father was a coppersmith. Gaudi showed interest in architecture early on and went to Barcelona to study. It took him eight years to graduate. It was 1878 when Catalan architect and director at the Escola Tècnica Superior d’Arquitectura. Elies Rogent, singled out Antoni Gaudi at graduation declaring, “Who knows if we have given this diploma to a nut or to a genius – time will tell” And in response, Gaudi with his ironical sense of humour reportedly told his friend. “Llorenc, they’re saying I’m an architect now”.

Gaudí’s work was influenced by his passions in life: architecture, nature, and religion. Gaudí considered every detail of his creations and integrated into his architecture the crafts of ceramics, stained glass, wrought ironwork forging and carpentry. He also introduced new techniques in the treatment of materials, such as trencadís which used waste ceramic pieces. Under the influence of neo-Gothic art and Oriental techniques, Gaudí became part of the Modernista movement which was reaching its peak in the late 19th and early 20th centuries. His work transcended mainstream Modernisme, culminating in an organic style inspired by natural forms. Gaudí rarely drew detailed plans of his works, instead preferring to create them as three-dimensional scale models. This was the reason why it was not easy to duplicate his works after he died. Between 1984 and 2005, seven of his works were declared World Heritage Sites by UNESCO. 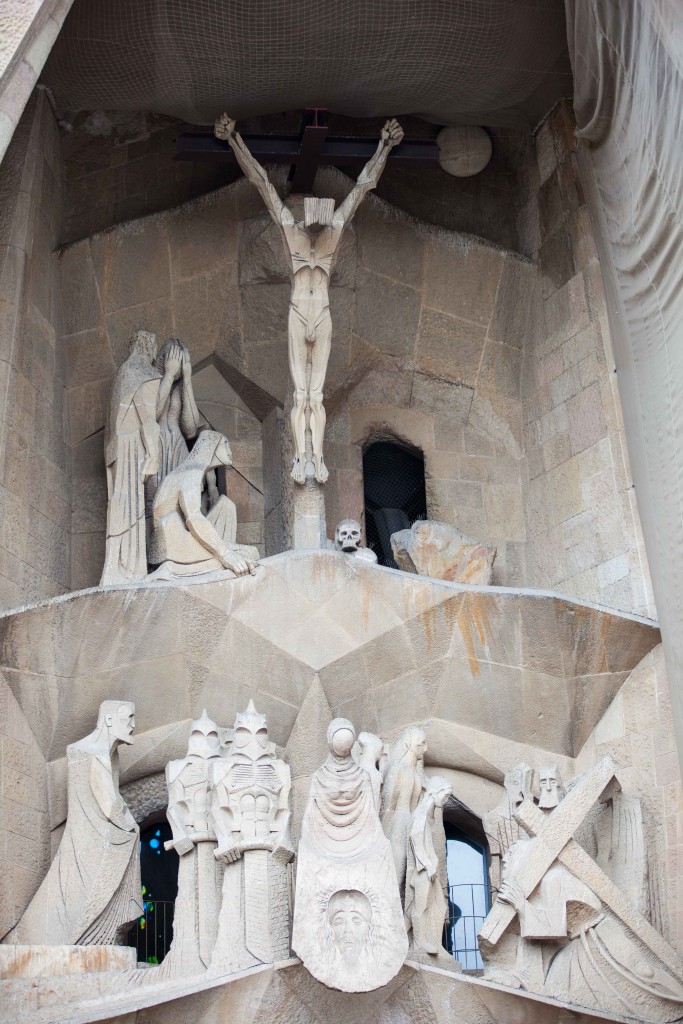 La Sagrada Familia: Gaudi’s most important work and the symbol of Barcelona to the world. In 1883, the architect started to work on this project. Unfortunately, he was unable to complete his work when he was knocked down by a tram while on his morning walk and died shortly in the hospital for the poor . This is one building that is forever under construction! Seen here is : the passion facade that was recently built. The three entries of the facade are “dedicated to the three Christian virtues.” The columns are bone-like and the figures are very sad which adds even more drama to the scene than Gaudi had planned. It was Josep Maria Subirachs that sculpted this, capturing Gaudi’s ideas of the facade in a modern way. Construction on Sagrada Família is not supported by any government or official church sources. Private patrons funded the initial stages. Money from tickets purchased by tourists is now used to pay for the work. Private donations are also accepted through the Friends of the Sagrada Família. 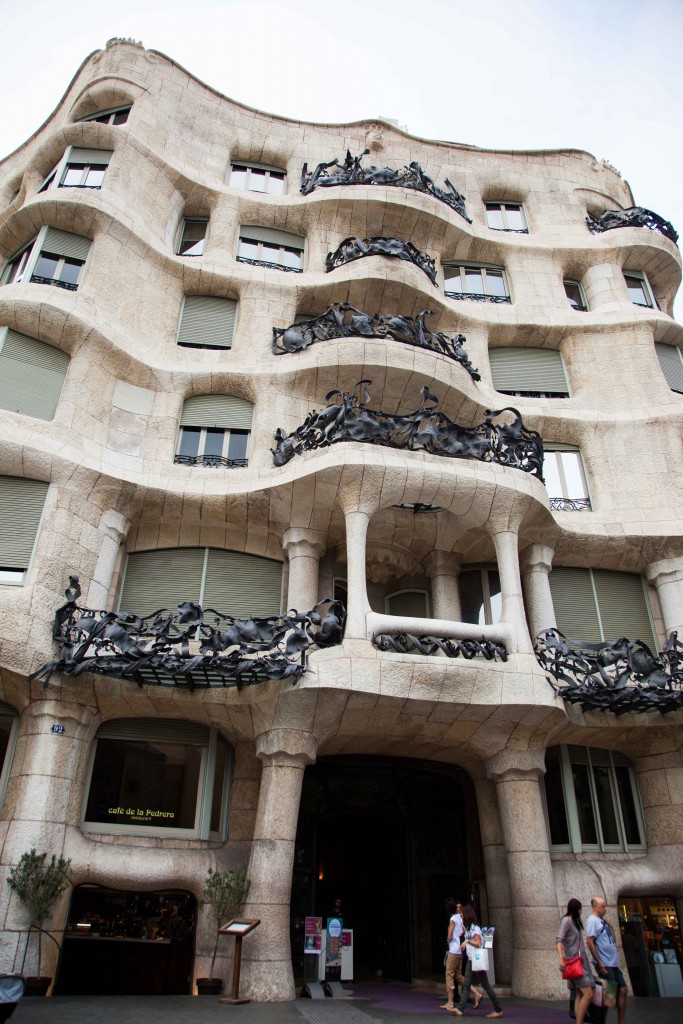 Casa Mila: Built between 1906-1912 by Gaudi, it is today an important cultural centre of Modernist influence run by the Fundacio Caixa Catalunya. It is popularly known as La Pedrera (meaning the ‘The Quarry’). It was his last civil work built between the years 1906 and 1910. It was commissioned in 1906 by businessman Pere Milà i Camps and his wife Roser Segimon i Artells. At the time, it was controversial because of the undulating stone facade and twisting wrought iron balconies and windows designed by Josep Maria Jujol. Architecturally, it is considered structurally innovative, with a self-supporting stone front and columns, and floors free of load bearing walls. Also innovative is the underground garage. In 1984 it was declared a World Heritage Site by UNESCO. Currently, it is the headquarters of the Fundació-Catalunya La Pedrera, which manages the exhibitions, activities and public visits at Casa Mila. 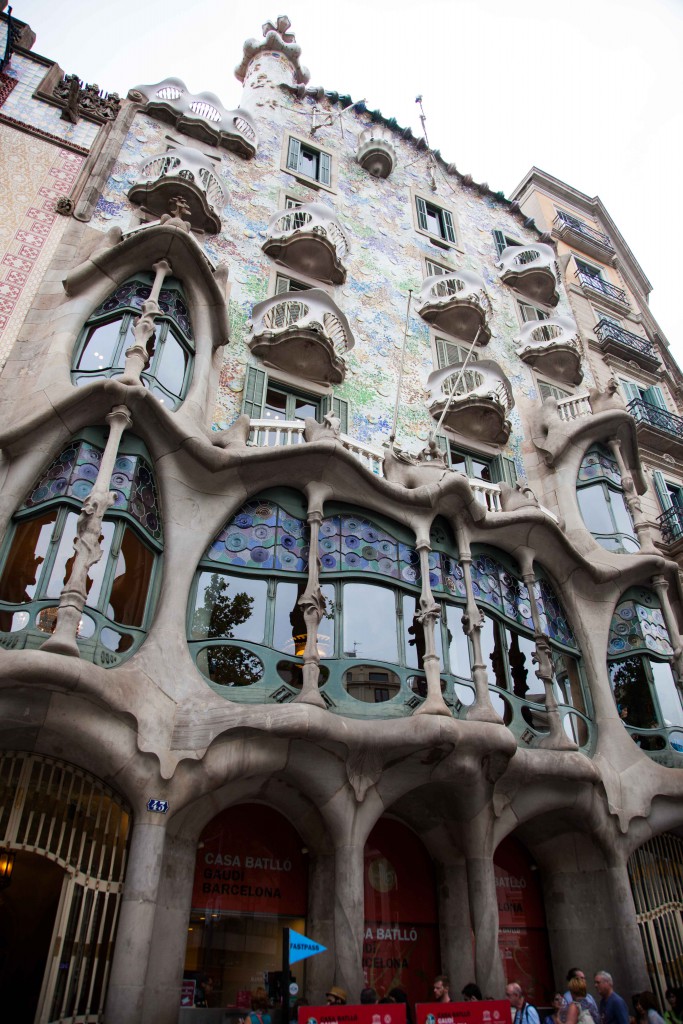 Casa Batllo: The local name for the building is Casa dels ossos (House of Bones), as it has a visceral, skeletal organic quality. Between 1904-1906, Gaudi remodelled the home of the industrialist Josep Batllo. Like everything Gaudí designed, it is only identifiable as Modernisme or Art Nouveau in the broadest sense. The ground floor, in particular, has unusual tracery, irregular oval windows and flowing sculpted stone work. There are few straight lines, and much of the façade is decorated with a colorful mosaic made of broken ceramic tiles (trencadís). The roof is arched and was likened to the back of a dragon or dinosaur. A common theory about the building is that the rounded feature to the left of centre, terminating at the top in a turret and cross, represents the lance of Saint George (patron saint of Catalonia) which has been plunged into the back of the dragon.

One notable Unesco World Heritage site highly recommended for visiting would be Park Guell. It is filled with architectural fantasies and being situated on Carmel Hill, in the Garcia district, it offers a great view of Barcelona city and the bay area. 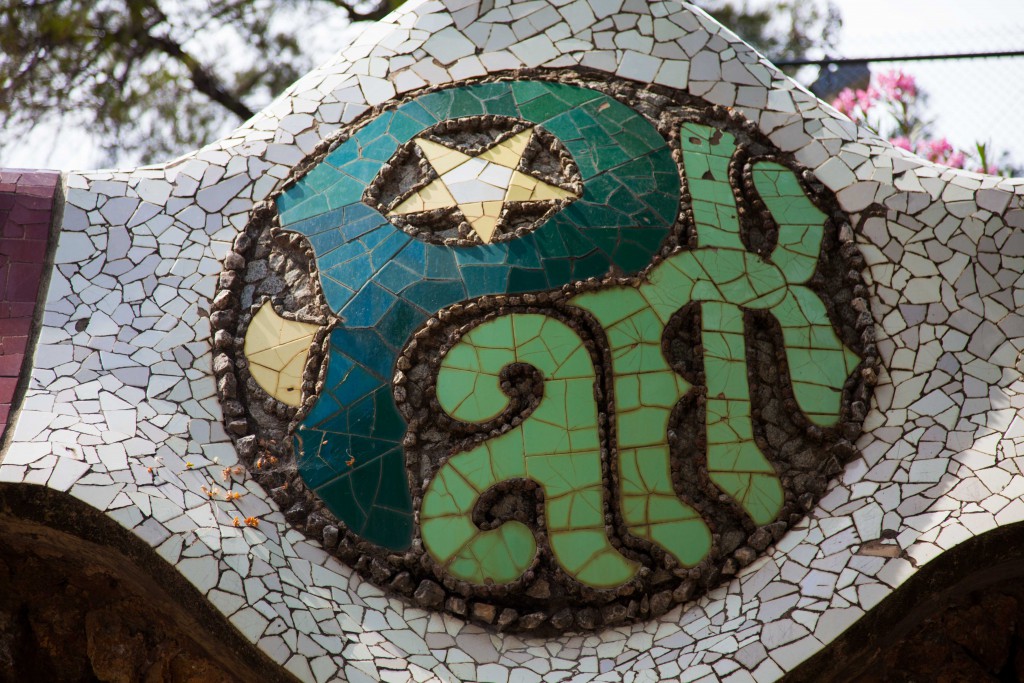 Park Guell is a public park although it was originally designed as a residential development along the lines of the English garden cities. However, this was a failed project as it was concepted during World War 1. Only 2 houses have been built as show houses. Gaudi himself lived in the house that is today a museum dedicated to him 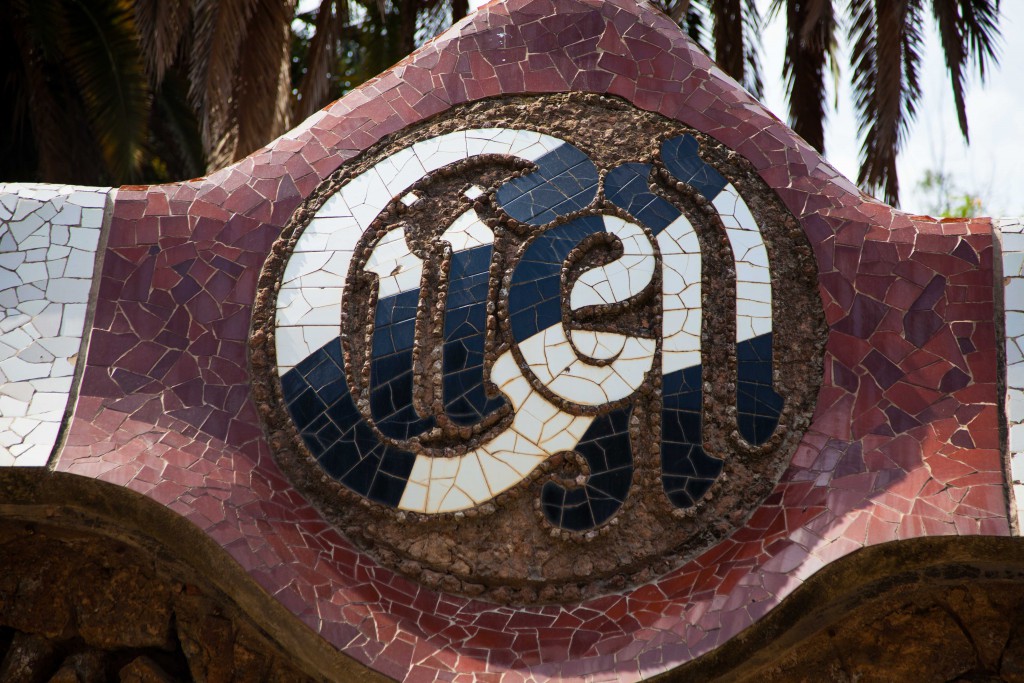 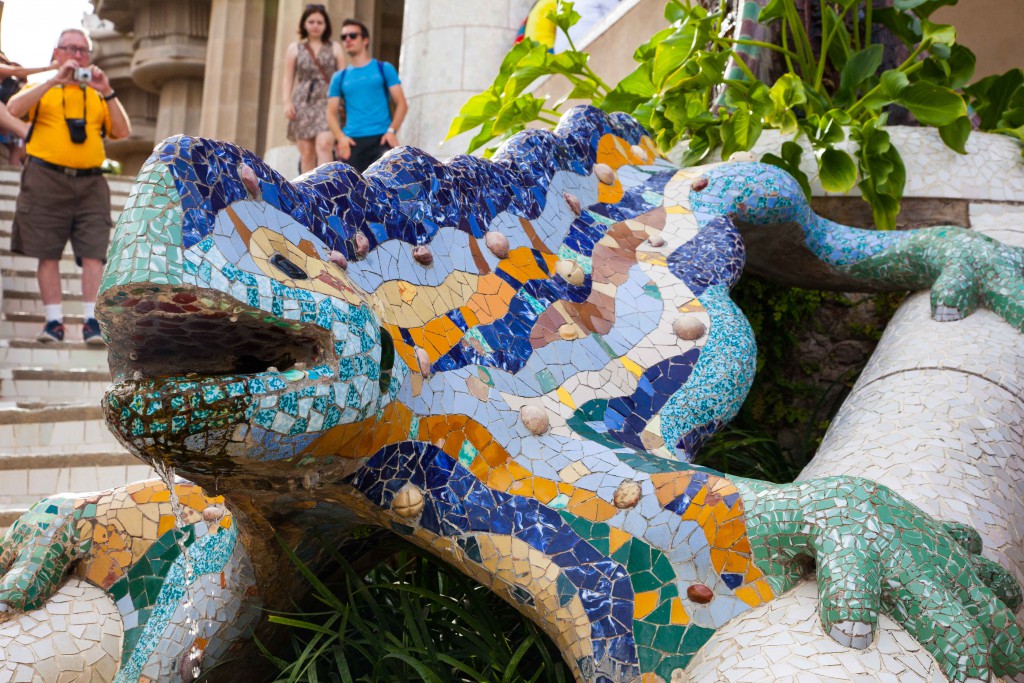 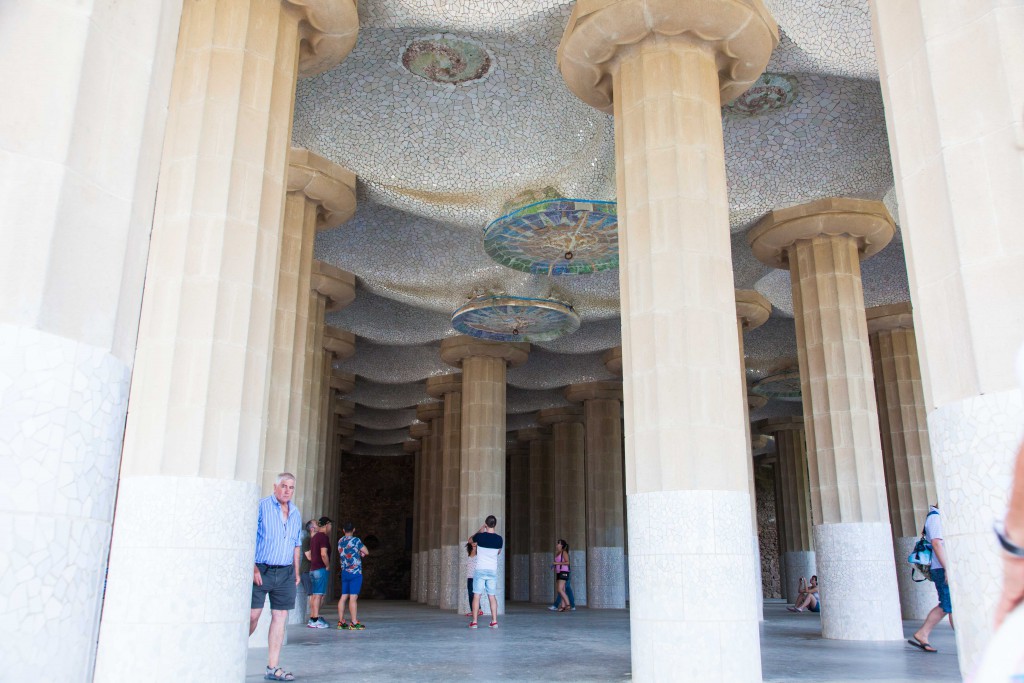 The columns inside the Hypostle Room. The ceiling is formed of small domes built using the traditional Catalan vault technique of brick-built timbrel vault. The ornamental soffits on the ceilings  are made from trencardis (tile shards). 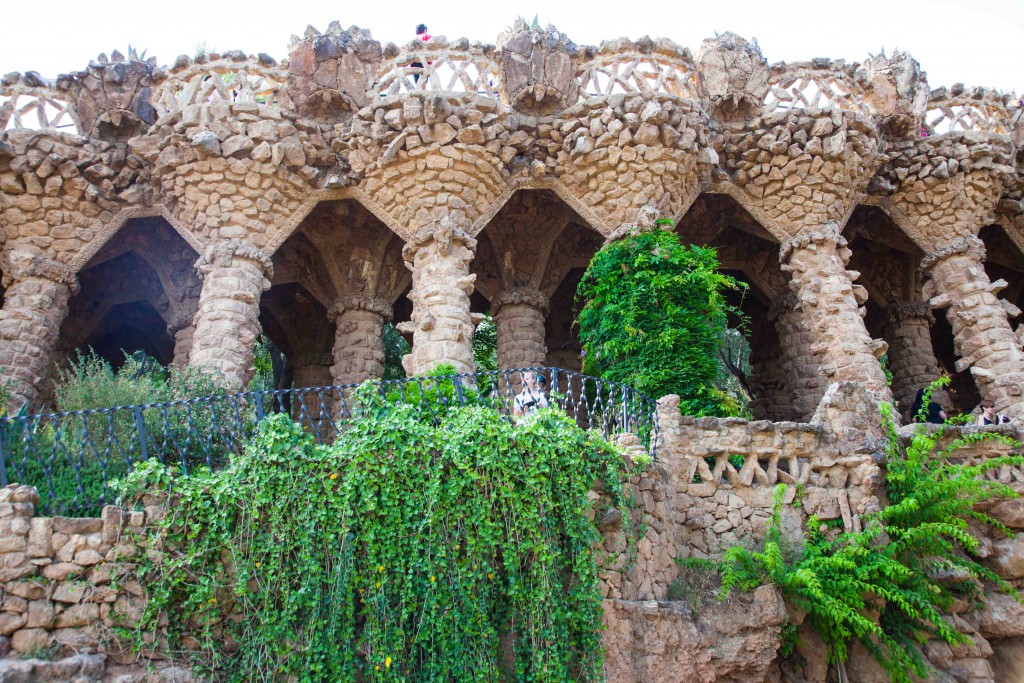 Roadways around the park to service the intended houses were designed by Gaudí as structures jutting out from the steep hillside. As can be seen, there are separate footpaths in arcades formed under these structures. Gaudí designed them using local stone integrating them closely into the landscape. His structures always echo natural forms, with tree trunk like columns. 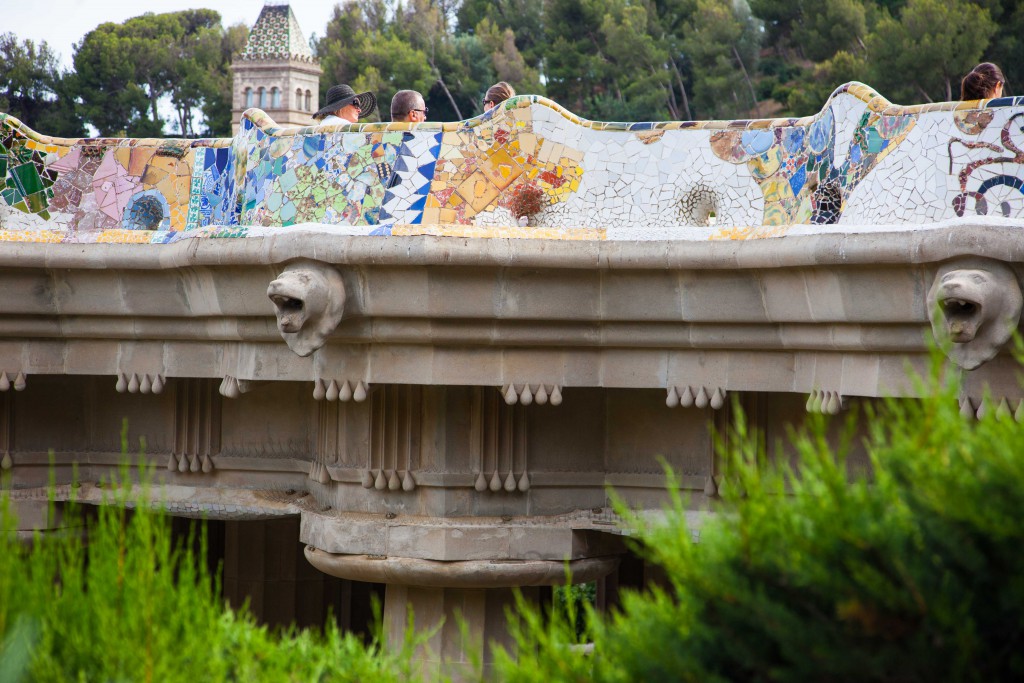 Park Guell: The unique shape of the serpentine bench enables the people sitting on it to converse privately, although the square is large. 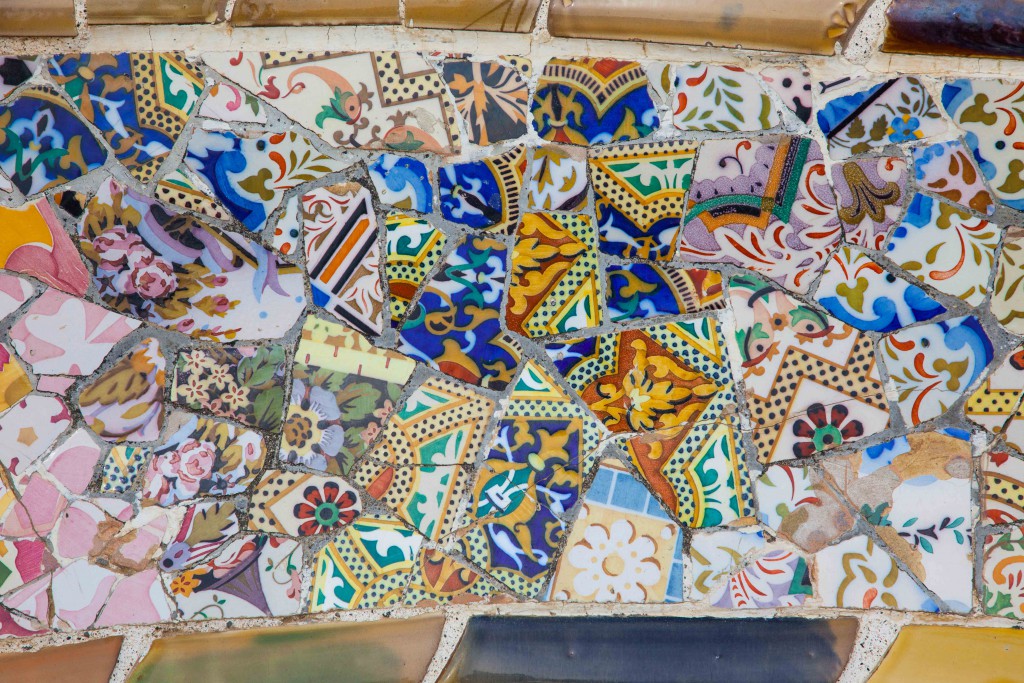 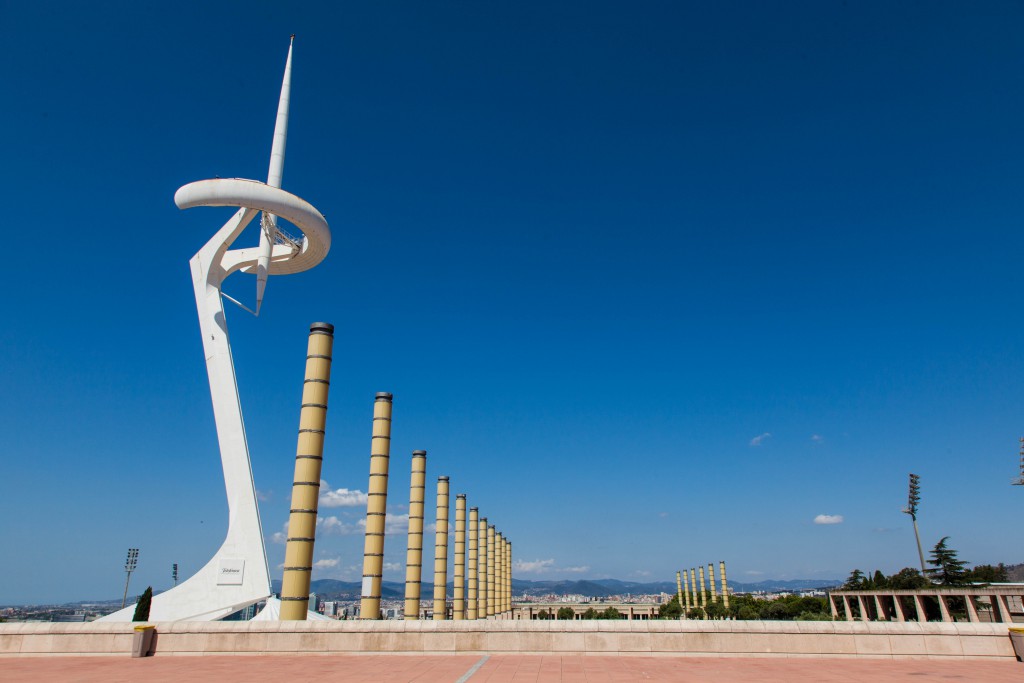 The Olympic Park includes all the sports facilities built for the 1992 Summer Olympic Games. Seen here, is the Torre Telefonica. The Anella Olímpica (Olympic Park) is located in the hill of Montjuïc, Barcelona. The major facilities consist of the Olympic Stadium, or Estadi Olímpic Lluís Companys, the Palau Sant Jordi sports hall, the telecommunications tower designed by Santiago Calatrava, the National Physical Education Institute (INEFC) and the Picornell swimming pools. The Joan Antoni Samarach Olympic and Sports Museum is also located in the Olympic Ring. The main promenade is located uphill, midway to the militar castle. The complex includes the main baseball field opposite the swimming pools. 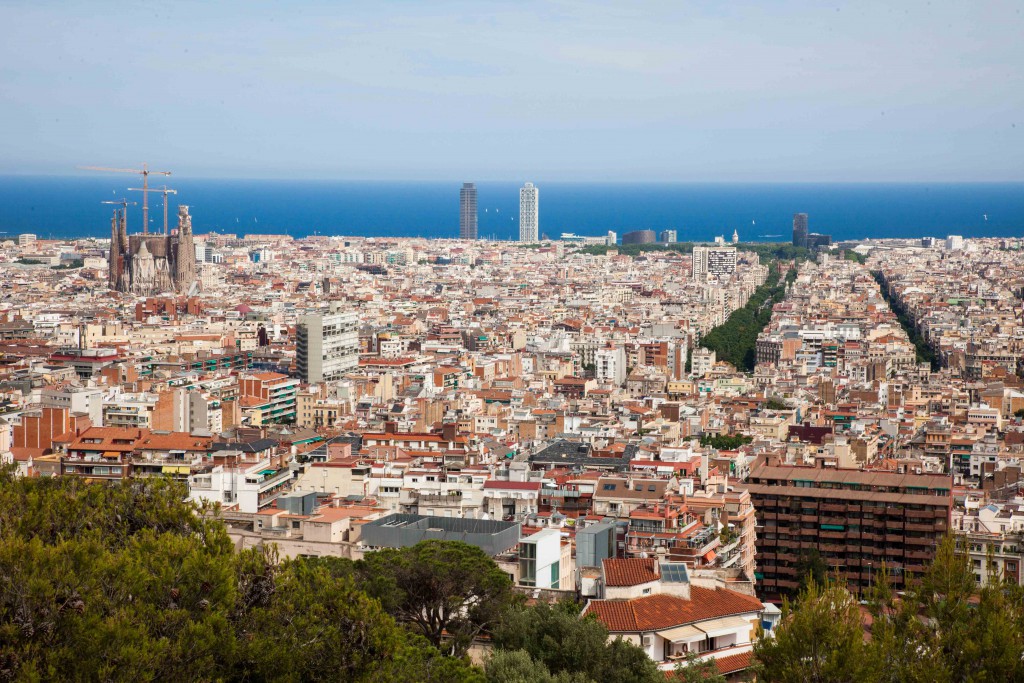 The view from Park Guell of Barcelona city with La Sagardia and the district of Montjuic extending to the bay can be seen. 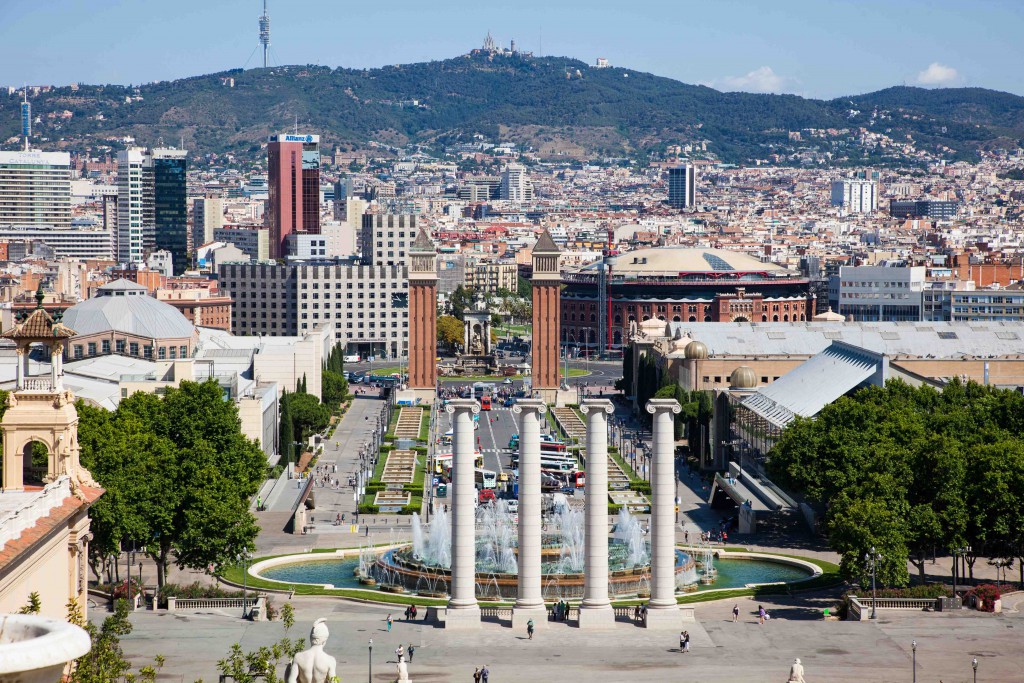 Barcelona Trade Fair as seen from atop Museu Nacional d’Art de Catalunya. The square seen here is Placa Espanya and the Magic fountain in the centre is the works of Carles Buigas in 1929, a fanciful piece that combines light, music and rhythm of the water. At the top right, it is the Arenas de Barcelona, once a major neo-Mudejar style bullring but has since been converted into a shopping complex. 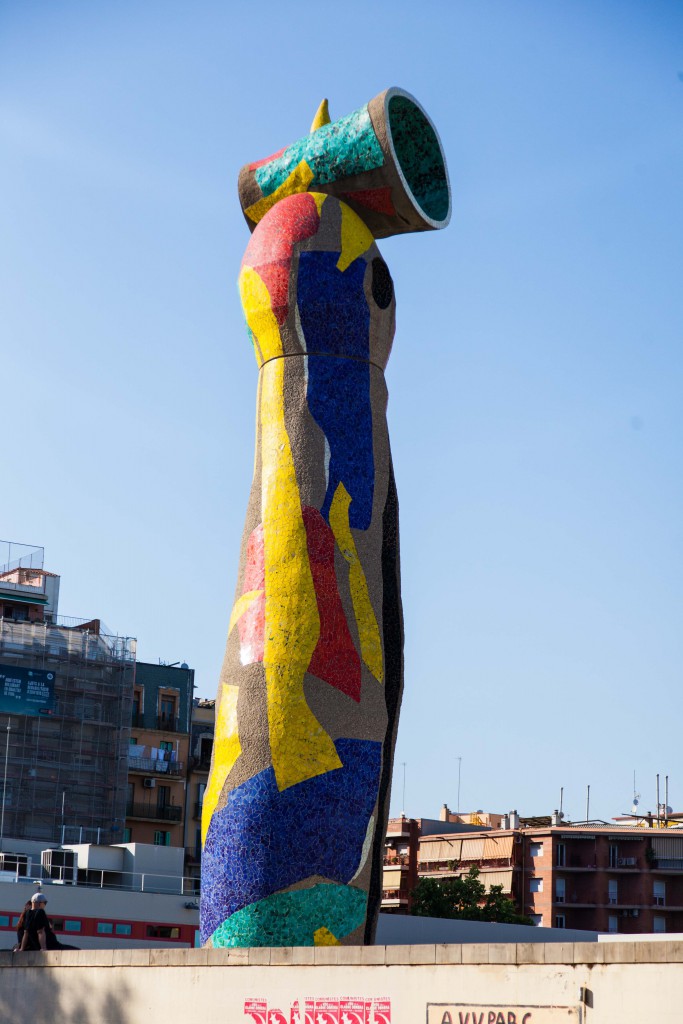 The sculpture by Joan Miro: Woman and Bird. There used to be slaughterhouse here but it has been since been converted to a park, a first example in the city of reusing an obsolete urban facility to something attractive. 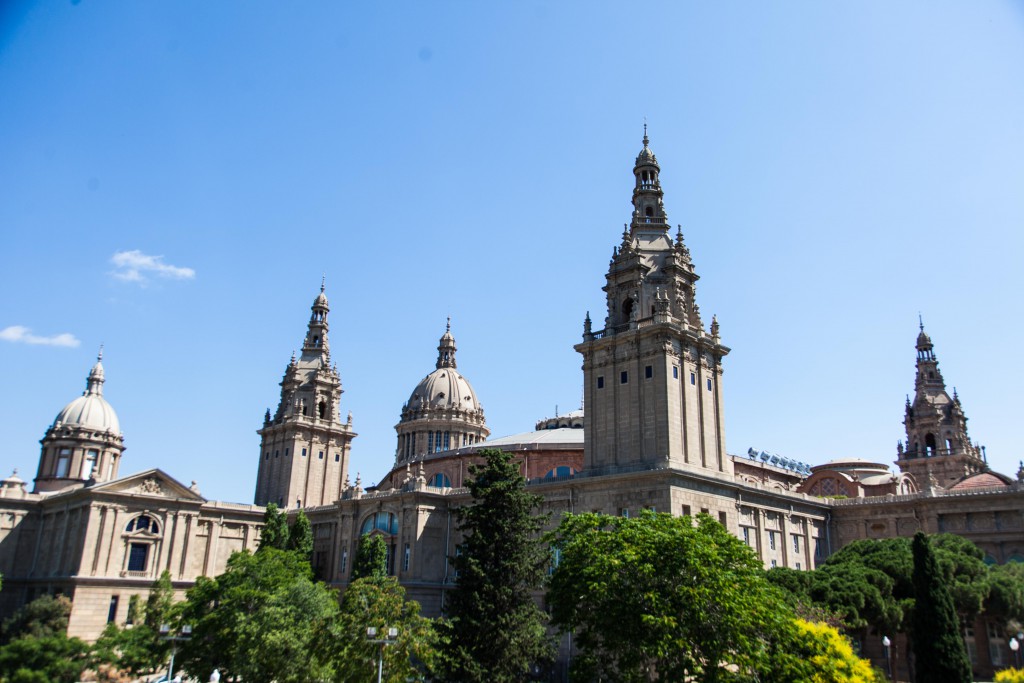 The National Palace, built for the Universal Exhibition of 1929, is the home of the most important museum in Catalonia featuring exhibits that trace the history of art from Romanesque through to modern times. 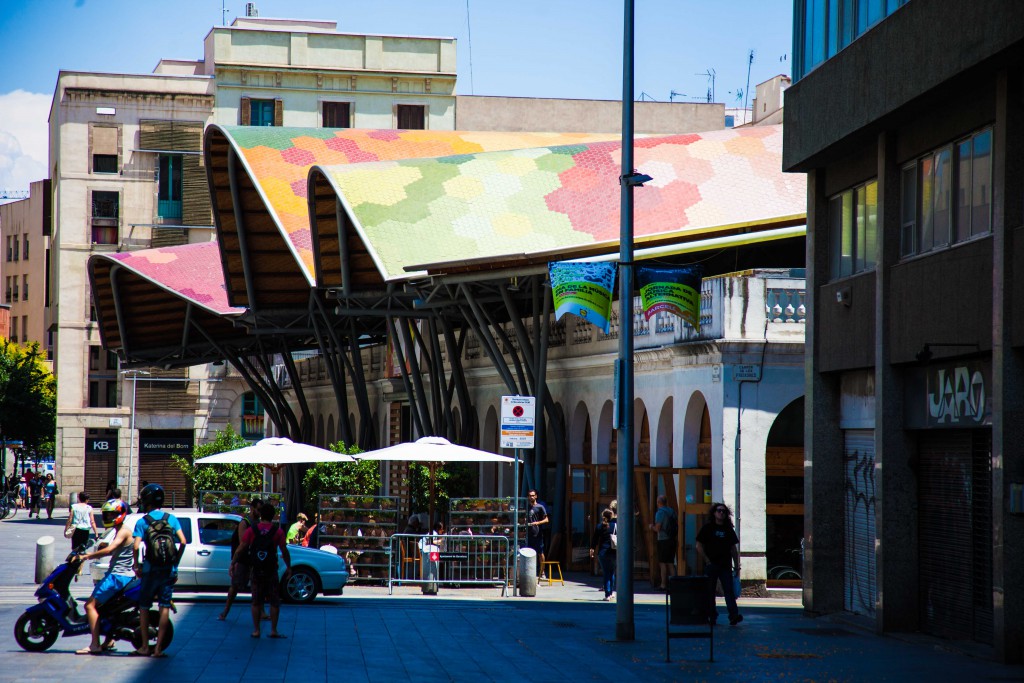 Mercat de Santa Caterina: This is a local market rehabilitated with a bold mulitcolor roof that reminds of a still life of flowers and fruits. 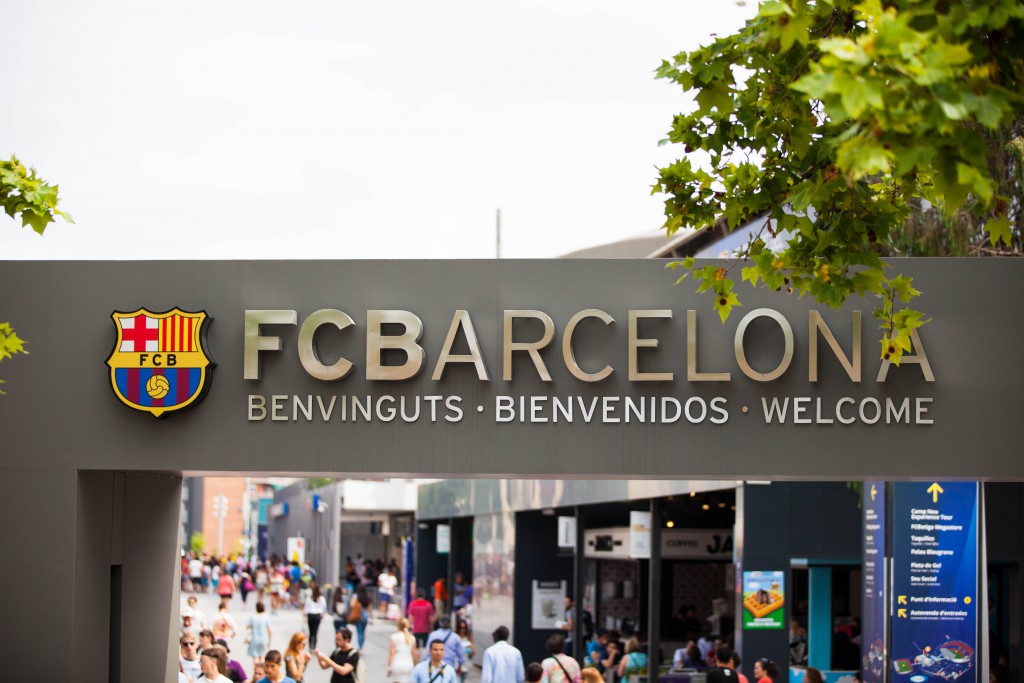 Camp Nou: The grounds of the football club is a must visit for fans of FC Barcelona. It is one of the largest football stadiums in Europe. There is also a museum for those who would want to know more about the history of F.C.Barcelona. The week we were in Barcelona was just after F.C.Barcelona was crowned champion of the Champion’s League. As such, there were many flocking to the stadium to buy souvenirs and of course the football jersey. 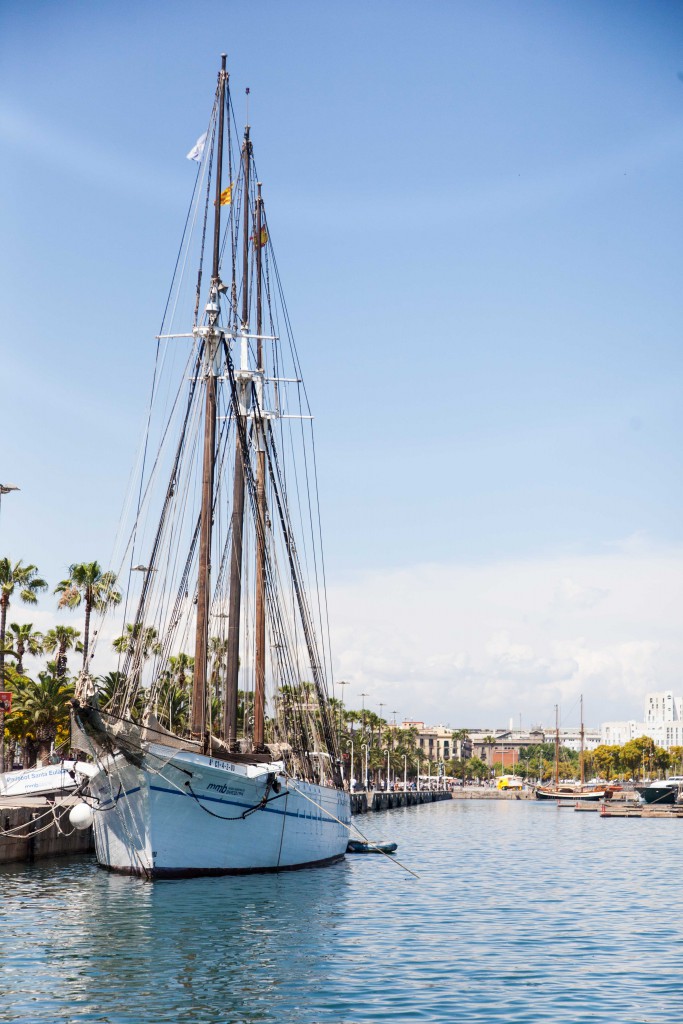 Port Vell. This area houses MareMagnum, an architectural complex filled with shops, restaurants. It is probably the only place licenced to open on Sundays in Barcelona. The Aquarium is also situated here, one of the largest in Europe containing important collection of Mediterranean species. This area houses the Maritime Museum in a Gothic building, the only medieval shipyard preserved in Europe. 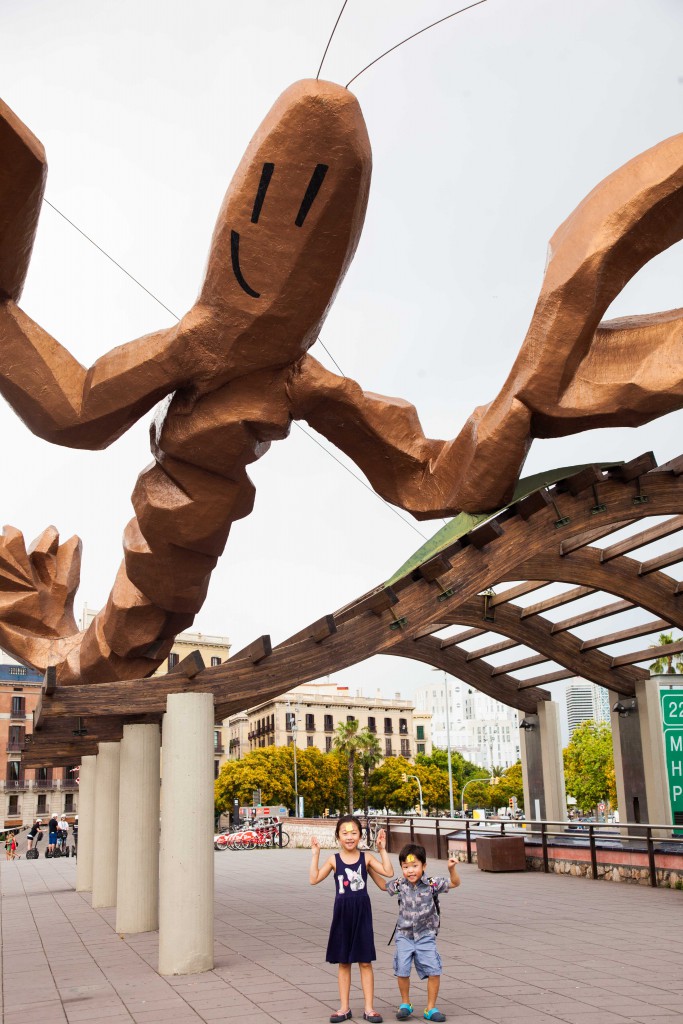 Avant garde artwork: Cigala by Javier Mariscal can be found along Moll de La Fusta which used to be warehouses for wood in the Port Vell area before Barcelonata beach. 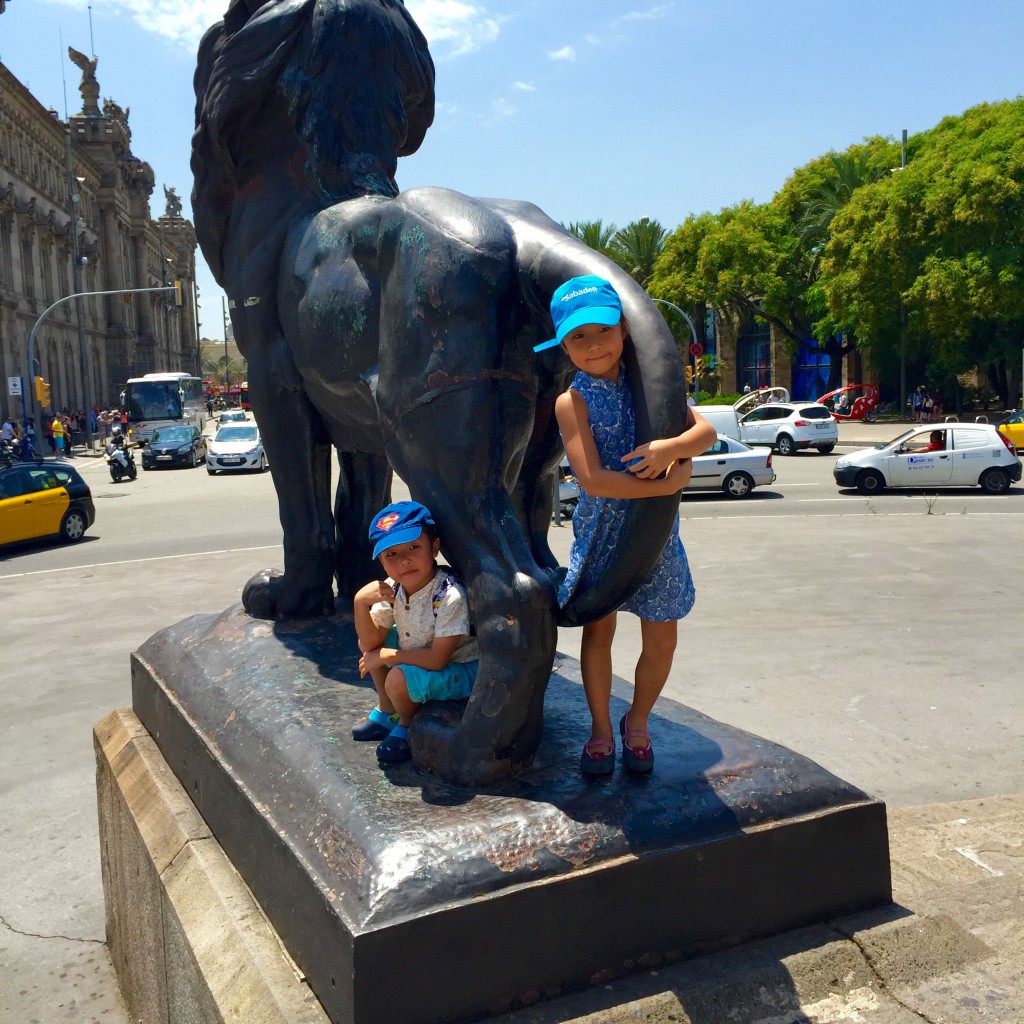 Monument to Columbus: This huge structure is flanked by lions as seen here. Hugely popular for photo taking, this monument pays homage to Christopher Columbus who discovered the Americas. 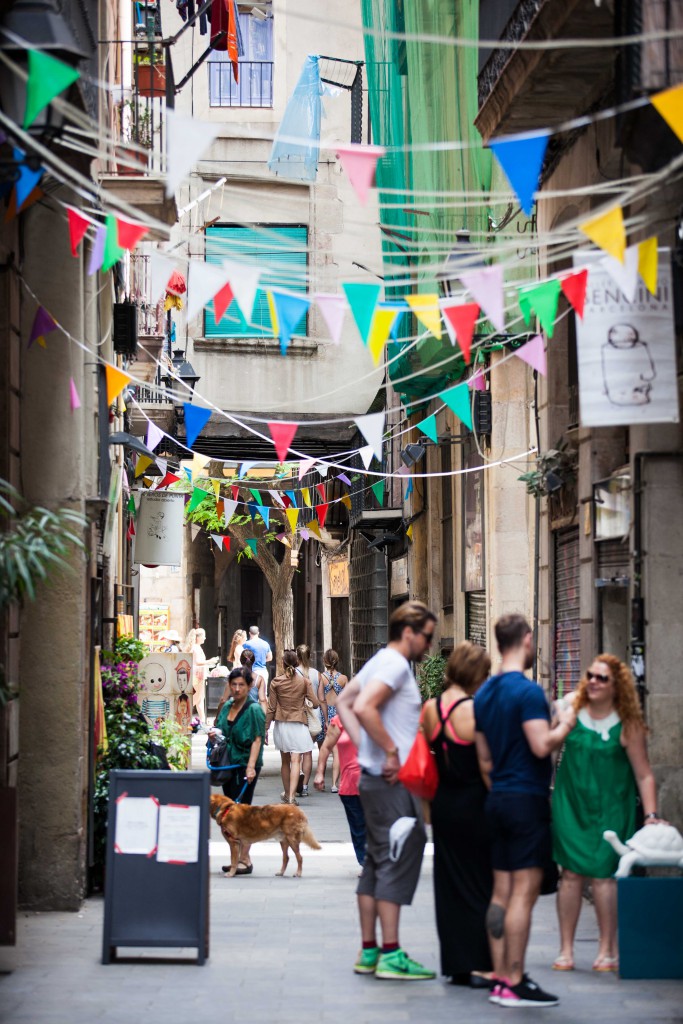 Walking in the El Born area, where streets are filled with shops, bars, art galleries, museums and churches. We spent quite a fair bit of time exploring the enclave of narrow streets.  It was just nice to kinda walk and get a little lost.