Most of the time at the mention of Japan, what comes to mind are hot springs, sakura blossoms, Mount Fuji, Kyoto and Tokyo. Indeed, few step off the tourist path. But those who do, will be greatly rewarded. There are entire prefectures waiting to be explored bringing along with it, its own history, culture, religion and foods. This is the last of my instalment for SouperchefannatravelsxJapan journals where I would want to just highlight some of the places we have been which are culturally important and helped me in my soup inspiration journey.

Most Japanese people observe rites of the native Shinto religion and those of Buddhism. Many Japanese people regard the religious practices of Japan as part of the nation’s culture, rather than a matter of individual belief or faith. We had the privilege of visiting a shrine and a temple during our visit and I have journalled the highlights below.

Hiraizumi’s most famous attraction, Chusonji is a UNESCO World Heritage Site, representing the Buddhist Pure Land since 2011. This place sees 80,000 visitors a year with 20,000 being foreigners and surprisingly 90% of these foreigners come from Taiwan. There is actually a direct flight from Taiwan to the nearby airport.  We were hosted by the chief monk, Shinso san, a well mannered educated young who speaks English and have studied in Europe. He comes from a family of monks, his grandfather and his father both served at Chusonji Temple. 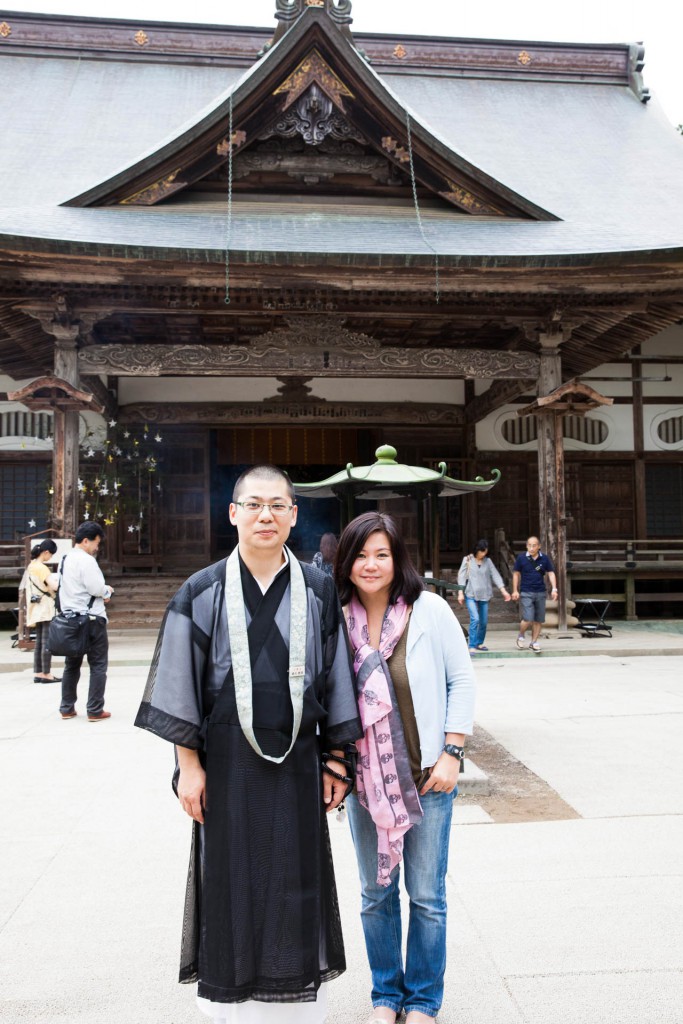 Chusonji Temple: at the main hall, the Hondo with our host, Shinso san, a 3rd generation monk who hosted us to a personal tour of the temple premises, telling us about its history and its significance. I was educated here on the difference between a temple and a shrine, specifically we are not suppose to bow and clap our hands as what we would normally do if we were at a shrine.

Chusonji was established in 850 by the priest Ennin as a temple of the Tendai sect of Buddhism in Tohoku. The temple came to prominence when the northern branch of the Fujiwara clan moved their base to Hiraizumi. The reason for its existence was to console the souls of all those, whether friend or foe, who died in two major conflicts at the end of the 11th century. This was a period when Hiraizumi served as a sort of northern capital of Japan. It had a population of between 100K to 200K and it was one of the 3 major cities besides Kyoto and Dazaifu (Fukuoka today) It was a glorious culture using gold and silver flourished during this period, and was known as the Golden Culture of Hiraizumi, symbolizing the power of the Fujiwara clan who dominated Japan at the time. At its peak, the temple consisted of a large network of dozens of buildings. There were at least 100 halls housing 400 monks. But many were destroyed by fire in the 14th century. Today there are only 14 monks staying in its premises taking care of its day to day activities and prayer services. 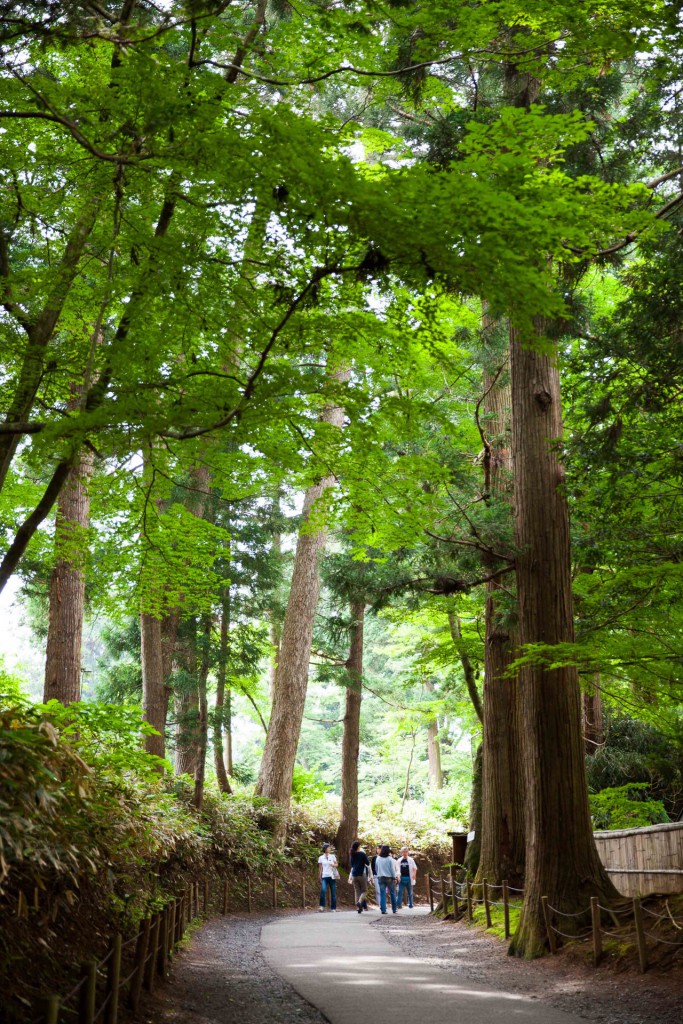 A leisurely stroll through lush greenery up to the Tsukimi-zaka Slope entrance of Chusonji Temple. The path is lined with 300 to 400 year old cedar trees and made us feel in awe.

With the fall of the Fujiwara at the end of the 12th century, Chusonji suffered likewise so that now only two buildings from that era remain intact. Luckily, among these is the most spectacular, the Konjikido. Similar to Kyoto’s famous Kinkakuji (Golden Pavilion), Konjikido is a hall completely covered in gold. It dates back to 1124 and stands inside another building for protection. As photography is strictly prohibited in the halls, to see the grandeur of the hall, please visit the official website here. 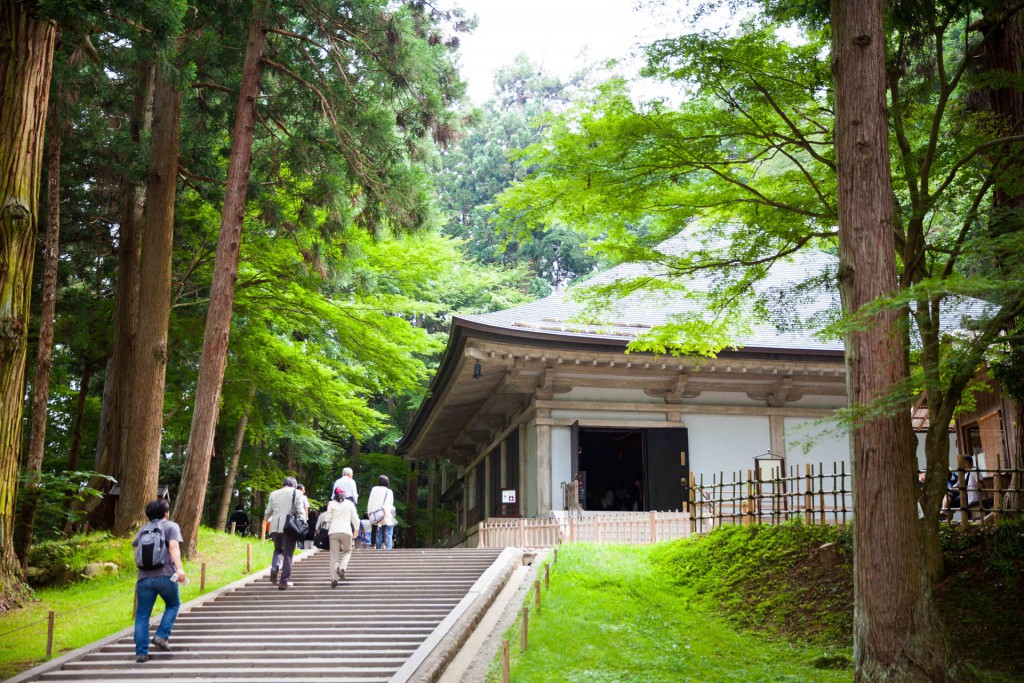 National treasure: The hall that houses Konjikidô (Golden Hall). The hall dates back to 1124 and is the only remaining example of a building from the Fujiwara-era at Chuson-ji. The mummified remains of the four generations of Fujiwara lords are located inside the hall. We were told by our host Shinsho san the last of the Fujiwara clan to be buried here, had only his head intact. We were told he was betrayed by his own trusted aide and his head was brought to the enemy for a collection of a bounty. Konjikidô is dedicated to Amida Nyorai (the Buddha of Infinite Light). Inside you’ll find a lot of golden statues, and mother of pearl and gold leaves were used for ornamental displays. It’s a really breathtaking sight. It is said to be one of the most beautiful and elaborately decorated buildings in the world! Apart from the roof the hall is covered with gold leaf both inside and out.

Dazaifu Tenmangu shrine is a Shinto shrine located about 15 km southeast of Fukuoka city. It is dedicated to the memory of Michizane Sugawara, also known as “the god of wisdom”. Michizane Sugawara (845-903) was a talented politician well versed in poetry and literature. But in 901, he was involved in a political battle and was demoted and transferred from Kyoto to Dazaifu, a remote area in Japan at the times. He died two years later. The Shrine was built on the site of his grave. Since the Middle Ages, this shrine had been worshiped as the god of learning, because he was an excellent scholar. 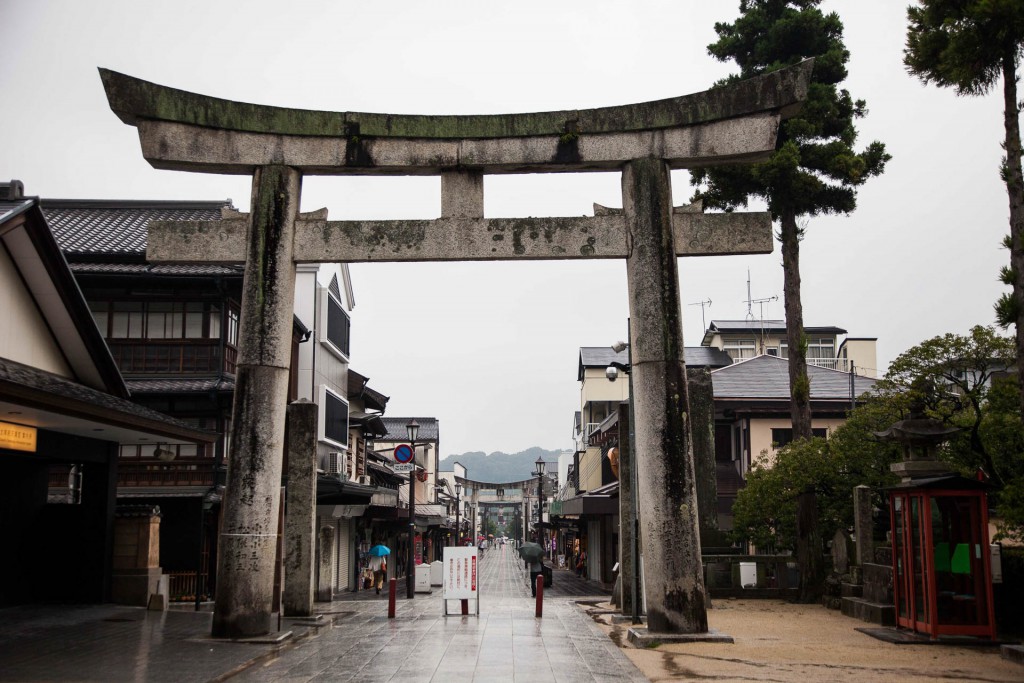 Entrance to the Dazaifu Shrine: The streets are lined with bazaars selling souvenirs (samurai umbrellas, traditional Japanese masks, Hello Kitty in kimono!) and umegaemochi rice cakes, as well as bicycle rental shops and a Starbucks outlet with the funkiest architecture courtesy of Kengo Kuma and Associates: the coffee shop resembles an intricate needlework of wood. The path toward the shrine itself is marked by a torii (or “bird perch”) gate, meaning that one is entering a sacred world. 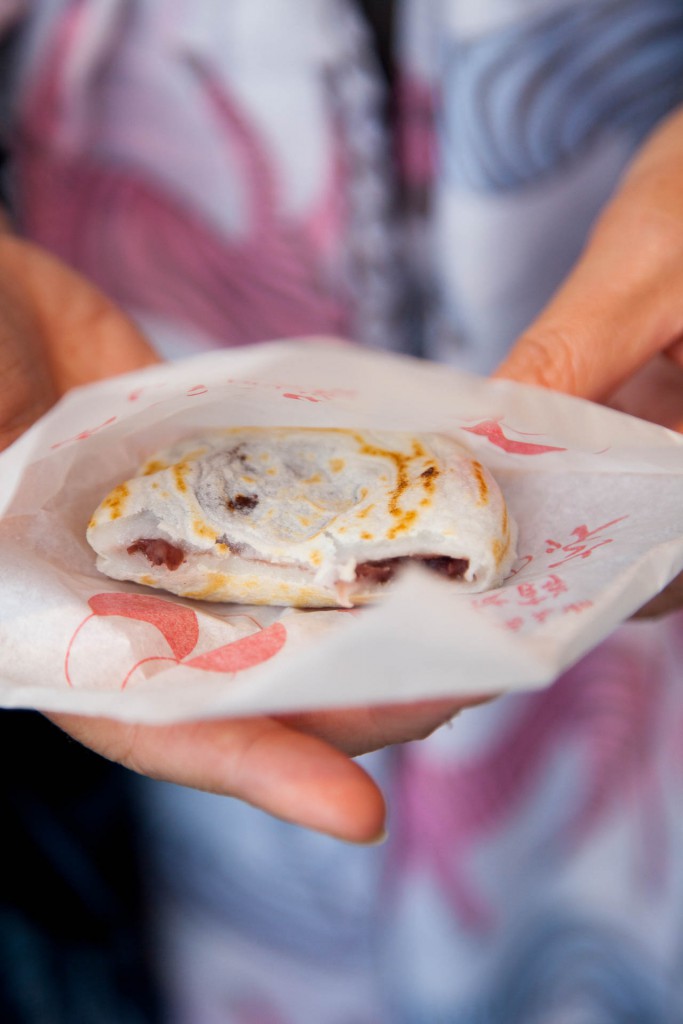 Umegae-mochi, a mochi cake filled with sweet bean jam, is the local confection of this shrine and is in connection with the story of Tobiume. This was really yummy when eaten hot. 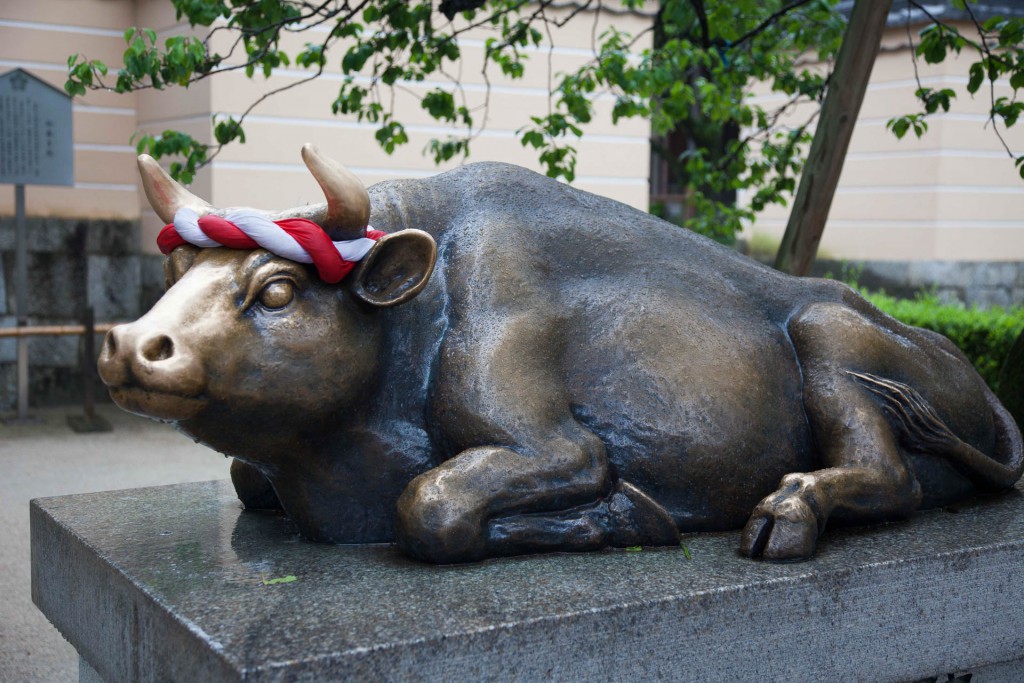 An ox statue at Dazaifu Tenmangu. Legend has it that Michizane’s coffin was carried on an ox-pulled cart, and when the animal suddenly stopped and refused to move, it was taken as a sign – Michizane was buried on that particular spot. The statue is said to possess healing powers. If you stroke the head, you will become more intelligent. The Tenmangu Shrines are related to scholarship, many students would visit and rub its head and if you notice, the part of the horns and the face are a lot shinier than the other parts of the ox. 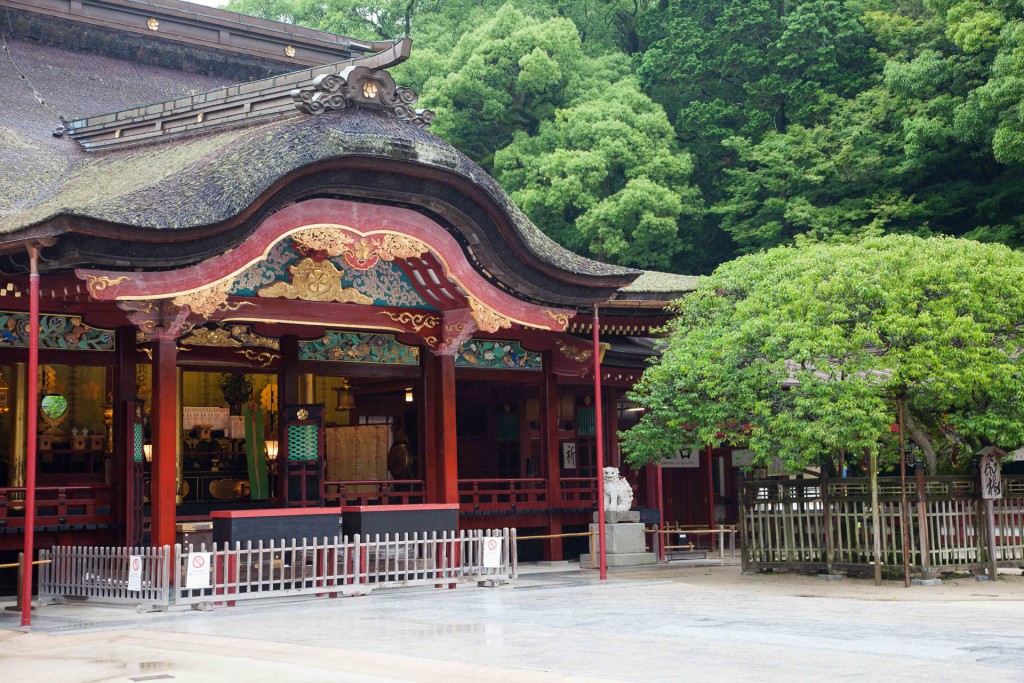 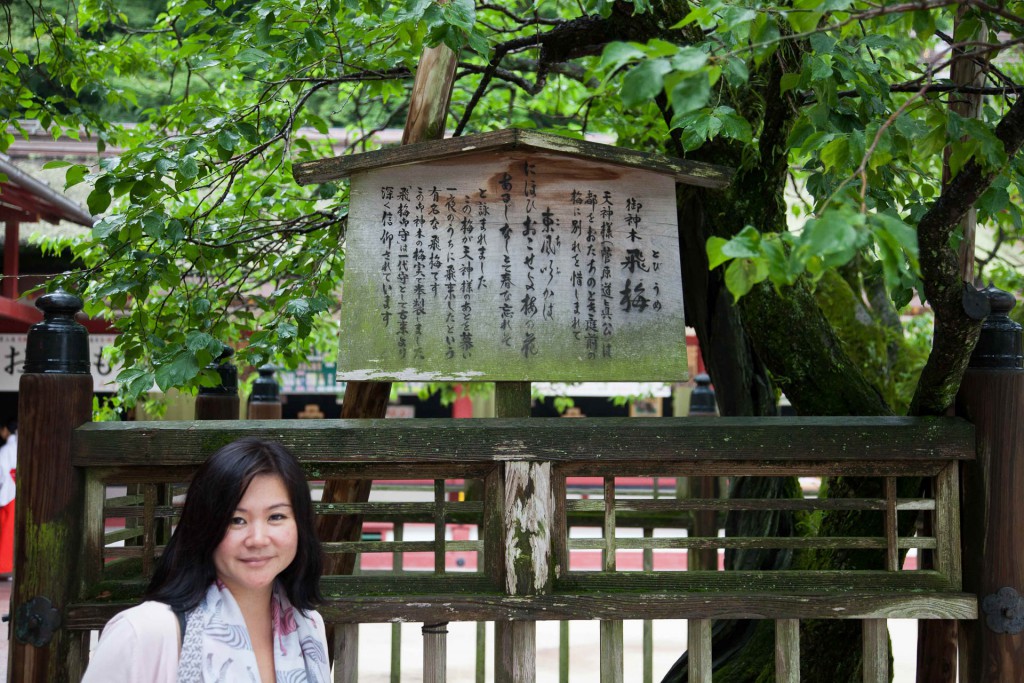 Dazaifu Shrine: The plum tree standing on the right of the main hall is the legendary tobiume (flying plum tree), which according to legend flew from Kyoto to Dazaifu to accompany Michizane into exile. Tobiume is said to be over 1,000 years old. In early January each year, Tobiume is always the very first tree to blossom, and the thousands of other trees quickly follow, producing an incredible sight when the Tenmangu is coverd in small pink and white flowers. 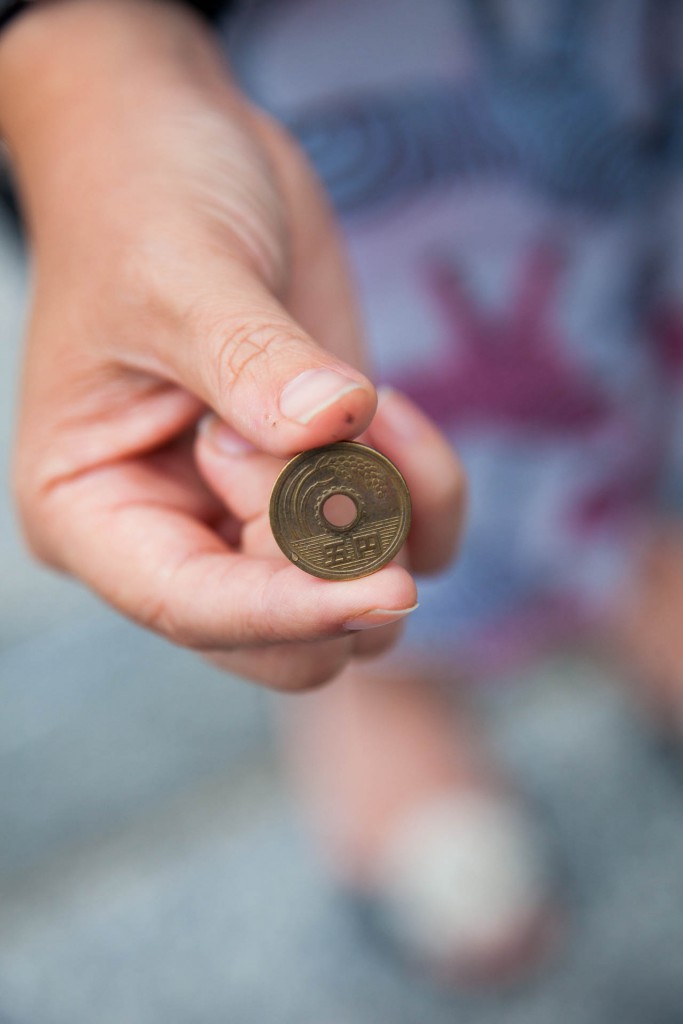 Many Japanese are Shinto followers and is regarded as a way of life rather than a religion. There are a series of etiquettes to be followed when praying. One such belief is the placing of the five yen coin into the wooden offering box. The Japanese for “five yen,” go en (五円) is a homophone with go-en (御縁), “en” being a word for causal connection or relationship, and “go” being a respectful prefix. As a result, five-yen coins are commonly given as donations at Shinto shrines with the intention of establishing a good connection with the deity of the shrine.

A highlight of 2 national treasures we visited during our souperinspiration trip.

Matsumoto Castle is the oldest castle in Japan still containing its original black painted, wooden keep (donjon) dating from 1595. The black color gave Matsumoto Castle its nickname “Karasujo” (Crow Castle) and the brooding, somber color was designed to sow fear in the hearts of any approaching attacker. Matsumoto Castle is built on flat ground and is thus classified as a hirajiro in Japanese (flat-land castle) and has a large moat and thick walls as a means of defense. Construction of the fortress that was to become Matsumoto Castle began under the Ogasawara clan in 1504 and was remodeled by Lord Kazumasa Ishikawa, a retainer of warlord Hideyoshi Toyotomi, in the mid-1590’s. It is one of four castles designated as a National Treasure in Japan. 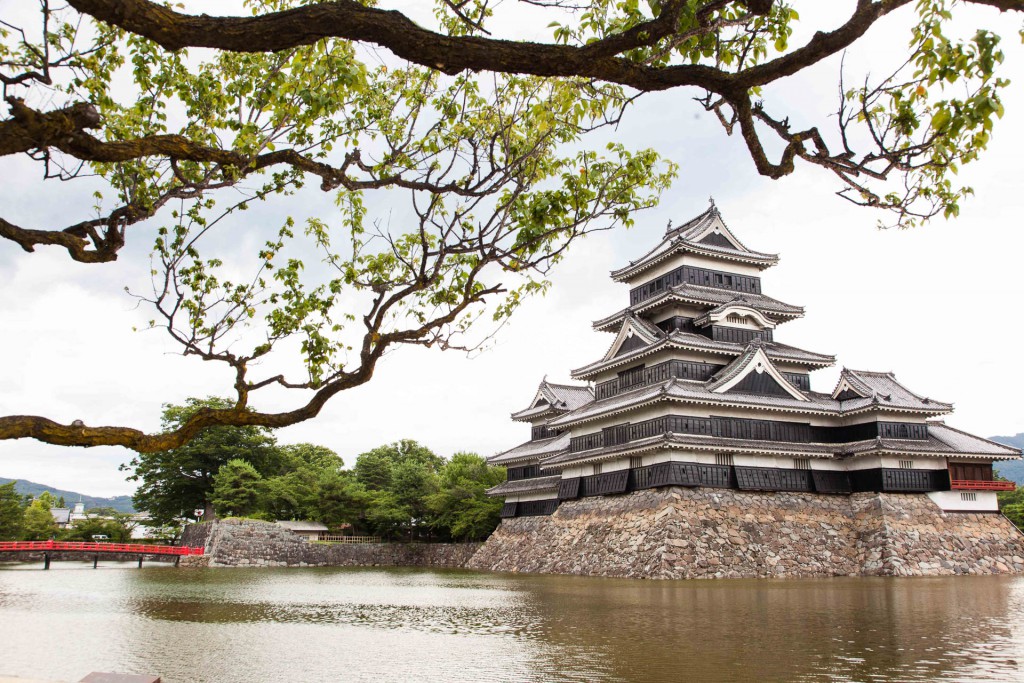 Matsumoto Castle-a national treasure constructed more than 400 years ago. According to our host Teddy san, it  is the oldest castle in Japan. Looking at it, it has 5 floors but in actual fact it has six floors, including the obligatory hidden floor where the samurai soldiers rested and kept their food and powder supplies. The branches seen here are those of cherry blossoms and it would be a beautiful sight in spring.

Koiwai farm is the biggest private farm in Japan, and is located 12 km northwest of Morioka city, Iwate. It is on the foot of Mount Iwate (2,038 meters high), and is about 3,000 hectares wide. It was established in 1891, and today its businesses are dairy, eggs production and the others, additionally it has a factory of dairy-products. In the farm, there is the sightseeing area named “Makiba-en”. where visitors can  meet cows and sheep, and get on a horse tramway. 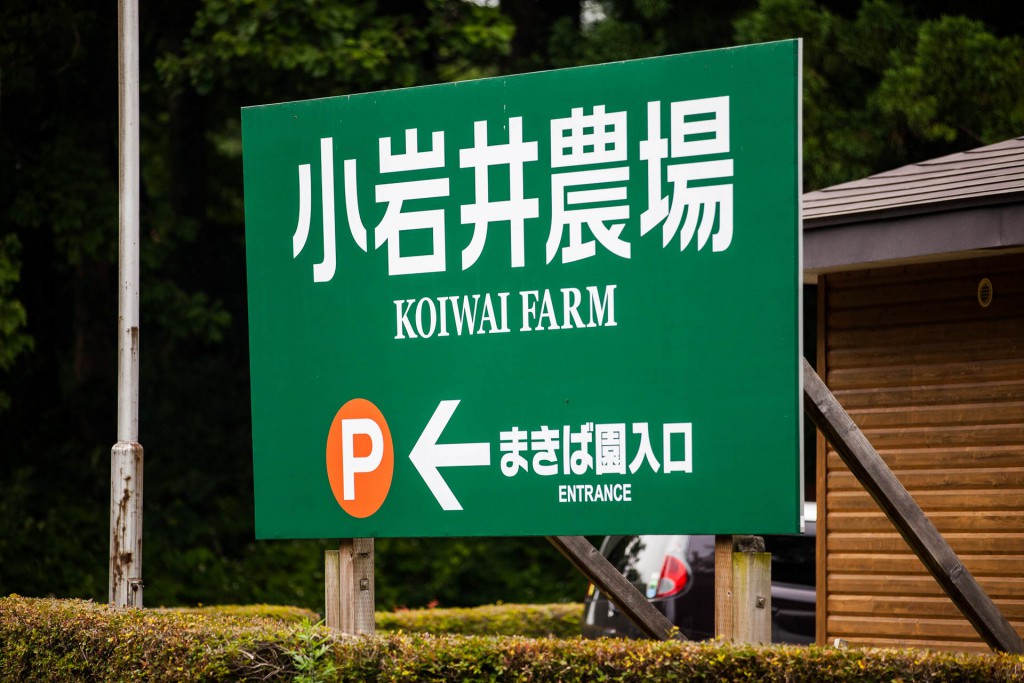 Koiwai is a 3000-hectare ( 7400-acre ) private farm located scenically at the base of Mt. Iwate. It is a popular tourist destination, with about 750,000 visitors every year. 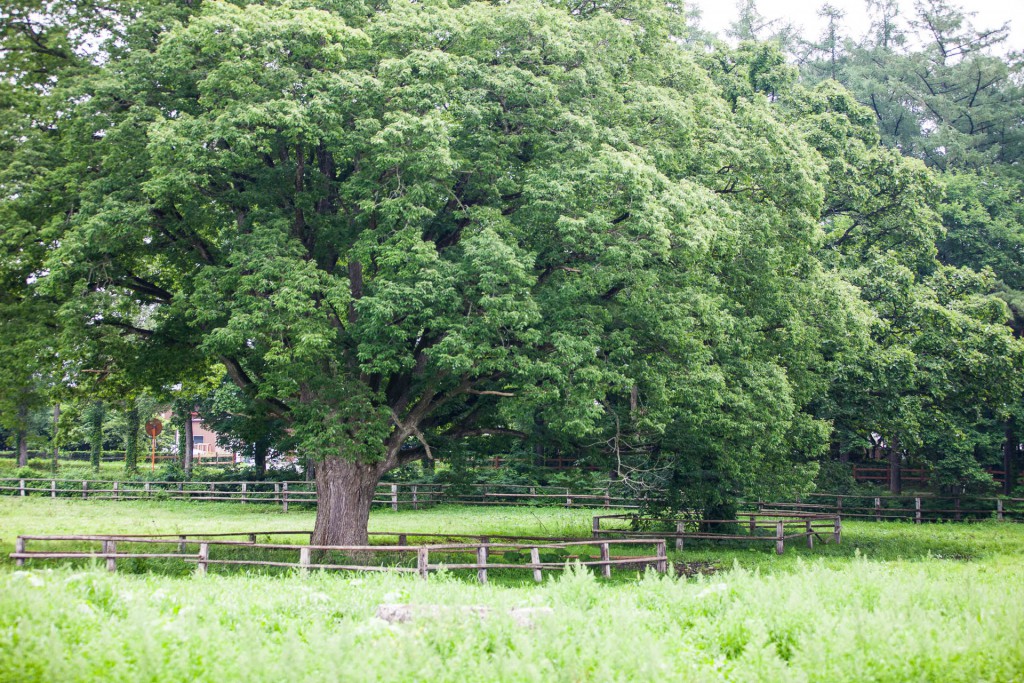 Koiwai farm: For most of us, the scenery of ranch farm is unfamiliar to the eye. 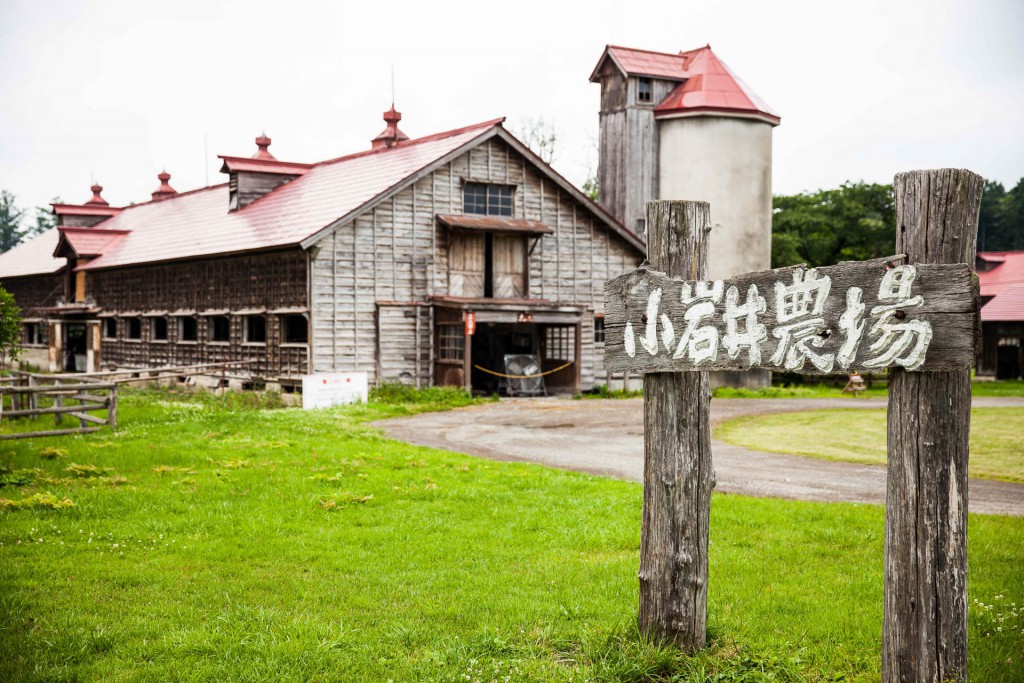 Koiwai farm: About 750,000 people visit Koiwai every year. A number of the farm buildings at Kamimaru Gyusha, such as the silos, the six cowsheds, and the head office, have been named National Tangible Cultural Properties. 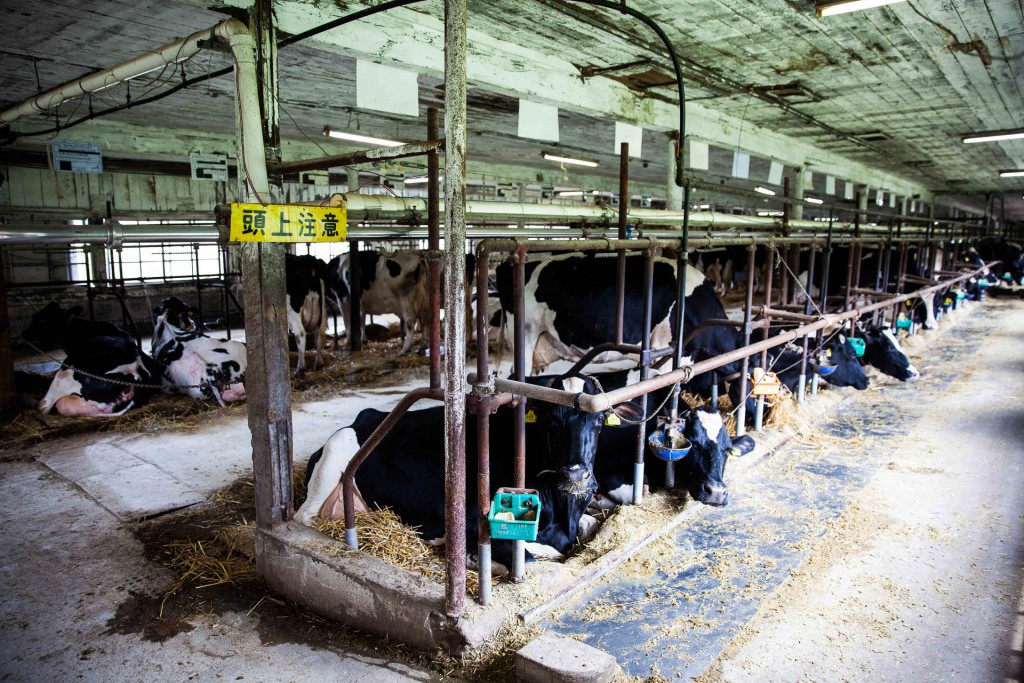 Koiwai farm; We toured the grounds and were hosted by Yumi san who told us how she grew up on the farm as her father worked here too. She shared about her happy childhood memories. The premises of the farm housed a school  for the kids of the farm’s employees. We were able to learn about farm operations and its historical significance in Iwate agricultural economy by touring the grounds. The milk barn seen here was built in 1964 and today it is still in operation. These dairy cows are milked twice a day and each cow yields 30 kg of milk per day. 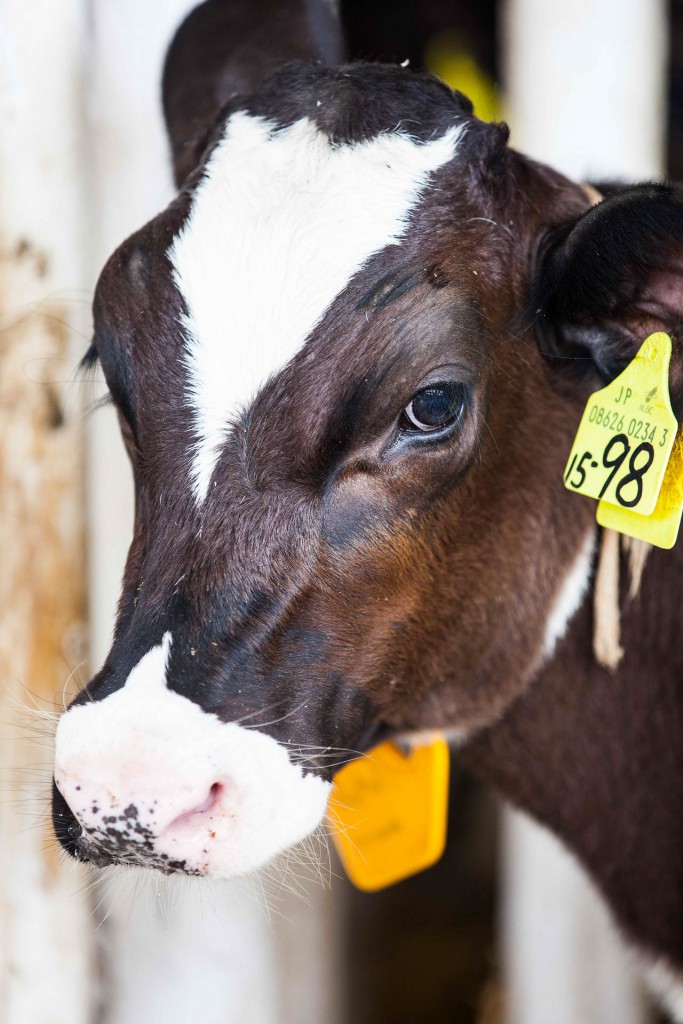 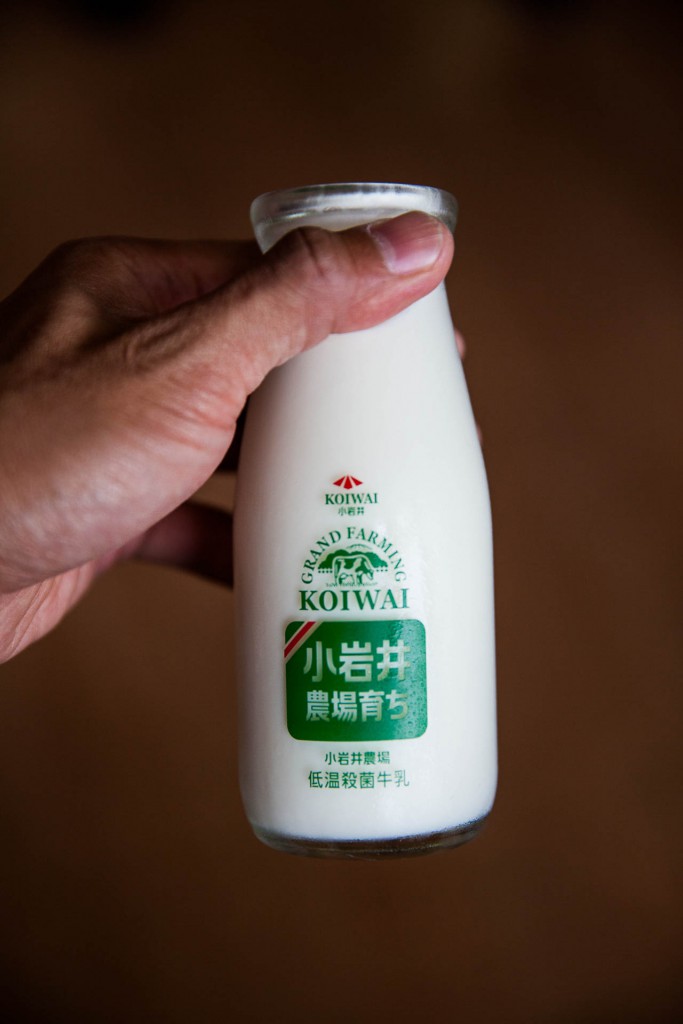 Koiwai farm is most famous for its dairy products. These milk jars are only available here. It is the creamiest milk I ever had. The fresh milk sold here is pastuerized but not homogenised. 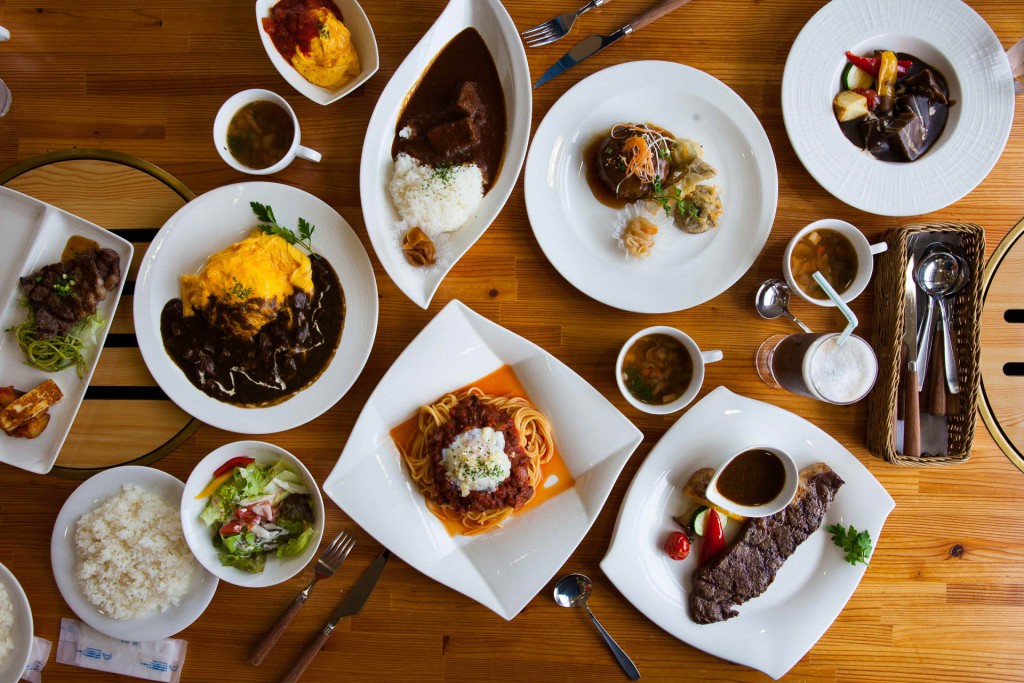 Koiwai farm: Another great reason to visit Koiwai is its food. We tried the rich, milky soft serve ice cream made with the farm’s fresh milk and eggs,  the fluffy omelet stuffed with rice, the beef stew and more. 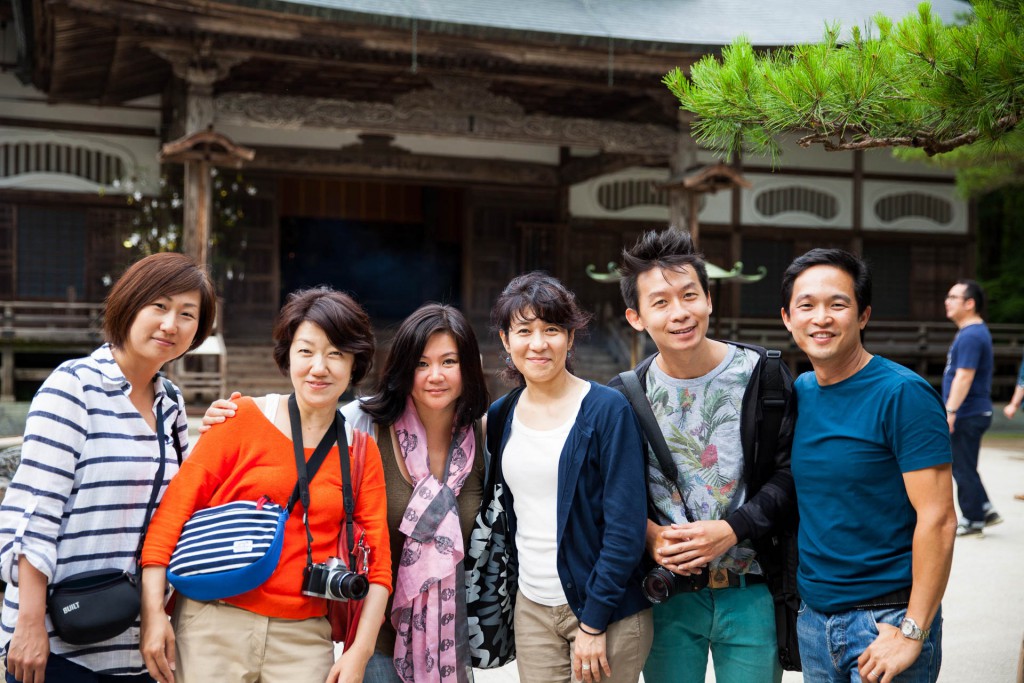 A capture of the moment at the end of our trip. From left: Kayano, Junko, myself, Rie, Ziqi and Andrew