Zenkoji Temple is the heart and soul of Nagano City. It is one of the most important and popular temples in Japan. It was founded in the 7th century and stores the first Buddhist statue ever to be brought into Japan when Buddhism was first introduced in the 6th century. Similar to the towns developed around castles, there are towns in Japan developed around the large temples or shrines. Called monzen-machi “temple towns”, they developed during the Edo Period, when pilgrimage became popular in Japan and were originally created to cater for pilgrims: restaurants, inns, local product stores. In Nagano, this is also the case along Daimon-cho. Lining the stone paved streets are storehouses and merchant houses “machiya” reminiscent of the romantic Taisho era.

Here, is where we experienced traditional heritage Nagano/Shinano cuisine. Situated in a remodeled 160-year old ‘machiya’ townhouse, Yayoiza serves Nagano’s heritage cuisine using locally sourced, seasonal ingredients including ‘Shojin’ Buddhist vegetarian meals exemplary of Zenkoji Temple. We were told that the restaurant used to be shop selling tatami mats and it was built after the Zenkoji earthquake in 1847. The “machiya” townhouses are unique with high ceilings, thick beams. 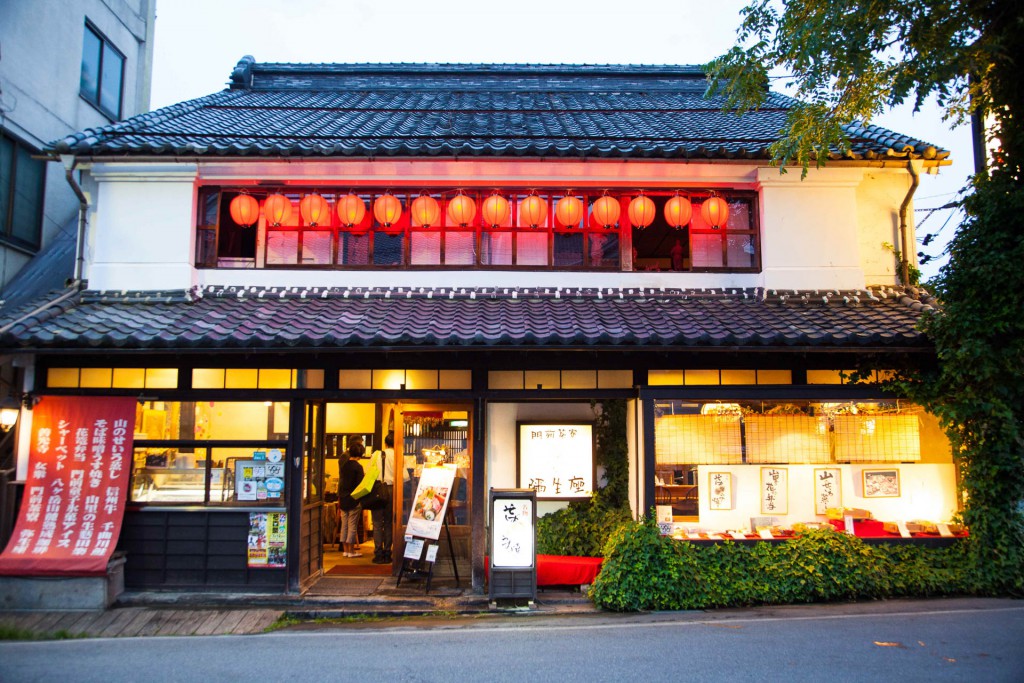 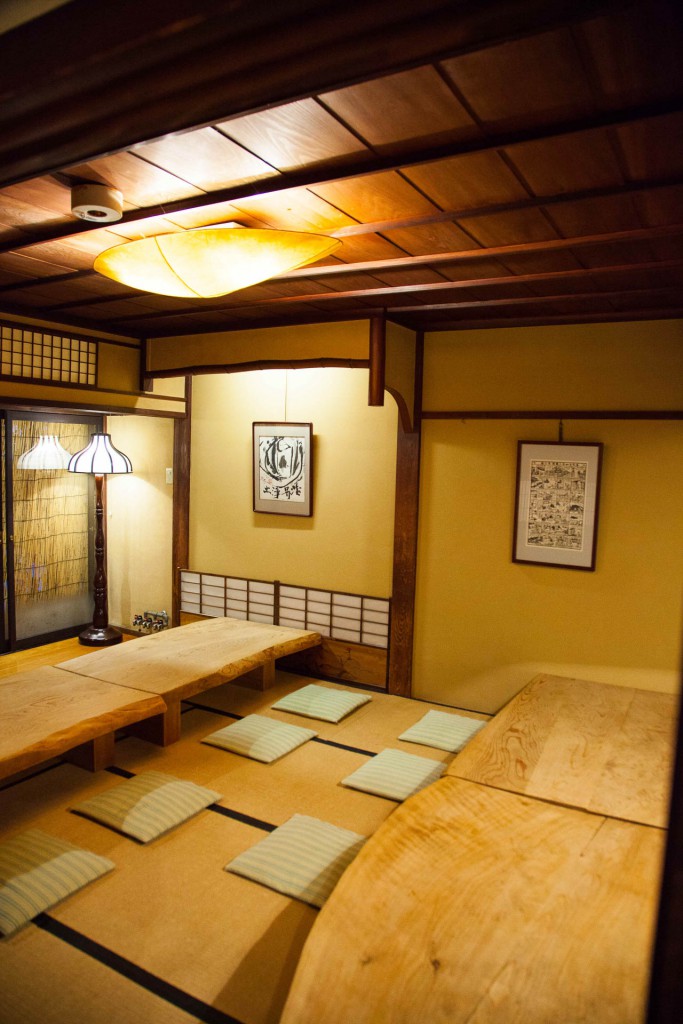 The traditional dining room in Yayoiza

Yayoiza emphasizes on using Shinshu ingredients incorporating as many seasonal ingredients into their menu. Although serving traditional cuisine, the food here is creative and has clean flavours. According to Kumiko san, the landlady, the delicious food is healthy and made according to Shinshu traditions reminiscent of the Yayoi Era.

The pancake-like ‘usu-yaki’ made with soba (buckwheat flour) and seasoned with miso is Yayoiza’s signature dish.

Traditional Shinano cuisine: Our menu for the evening written out beautifully in rice paper

I was in awe when the dishes were served one after another. Beautifully presented, clean in flavours. Deep rooted in tradition yet so wonderfully creative. 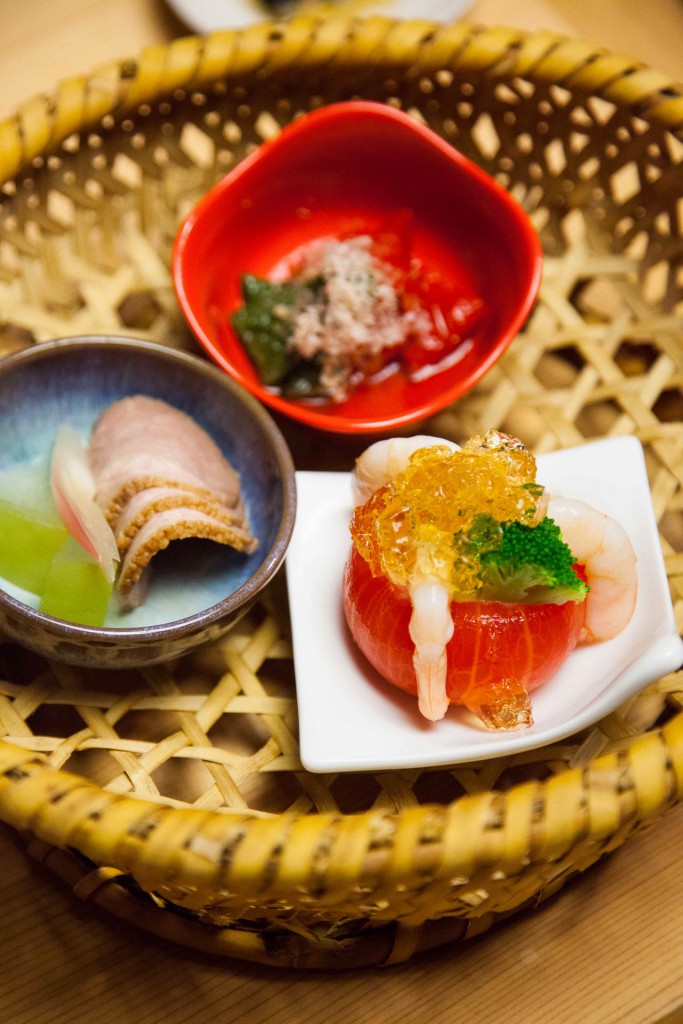 Traditional Shinano cuisine: A trio of appetizers: Peeled poached tomatoes stuffed with beancurd with a bonito consomme jelly, broccoli and prawns. Smoked duck with gourd. Grilled peppers. THe tomato was WOW! 10/10 for me. 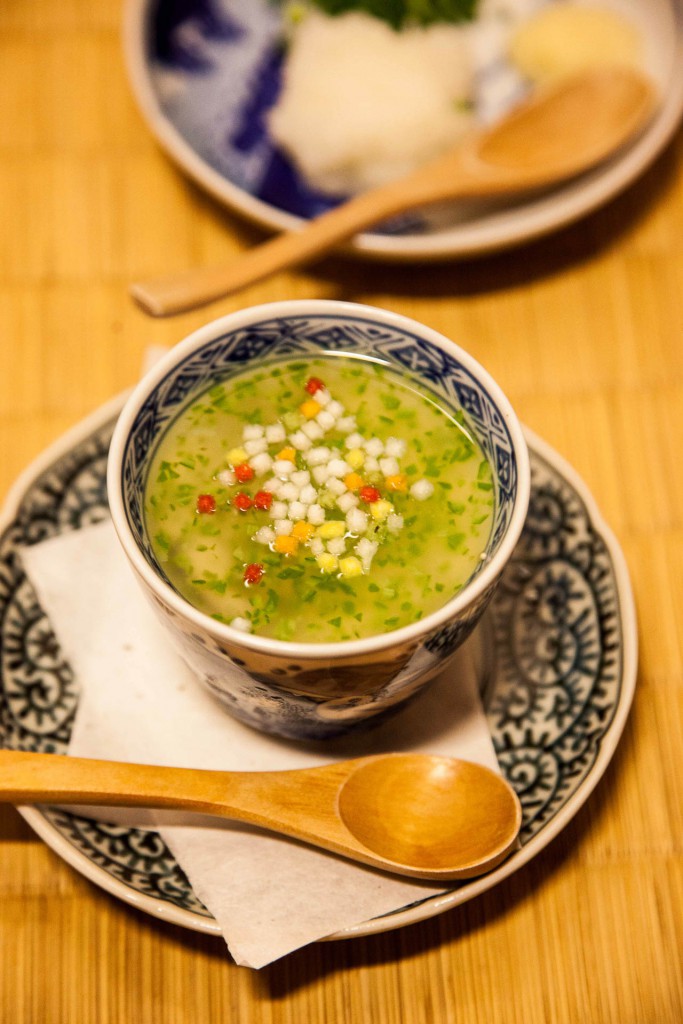 A cold chawanmushi dish served with an okra sauce. I think there are health benefits from consuming this dish. Okra is a thick, gluey substance that lubricates the large intestine and helps with elimination. Okra’s fiber also feeds the gut’s beneficial bacteria (probiotics) and helps maintain the pH balance of your digestive tract.

Traditional Shinano cuisine: Rustic Buckwheat flour pancakes in nori was wrapped with Shinshu miso and thinly sliced leek. This to me was the star of the evening! This is considered a traditional snack in Nagano. What was creative was the the little touch of broadbean stuffed with a fish paste and steamed. 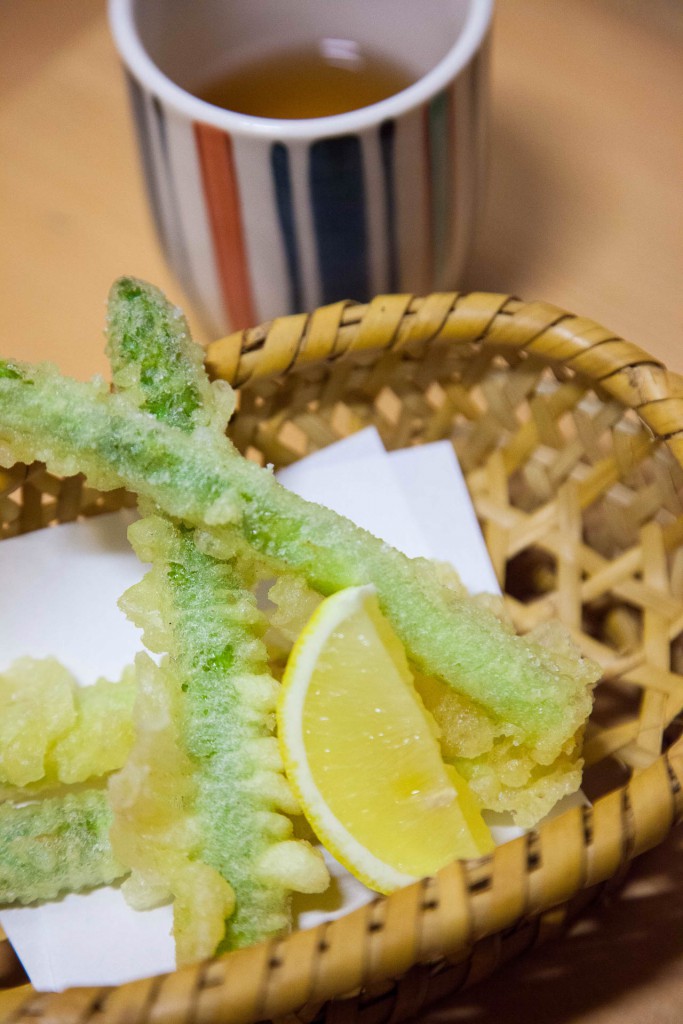 Traditional Shinano cuisine: Tempura Asparagus served with a wedge of lemon. Here, no sauce is given. Frankly, there was no need for it. The asparagus was absolutely divine, huge , sweet and tender! Also locally sourced, the flavours were really clean. Nagano is Japan’s 3rd largest producer of asparagus! I was also told tempura is a traditional must have after praying too. 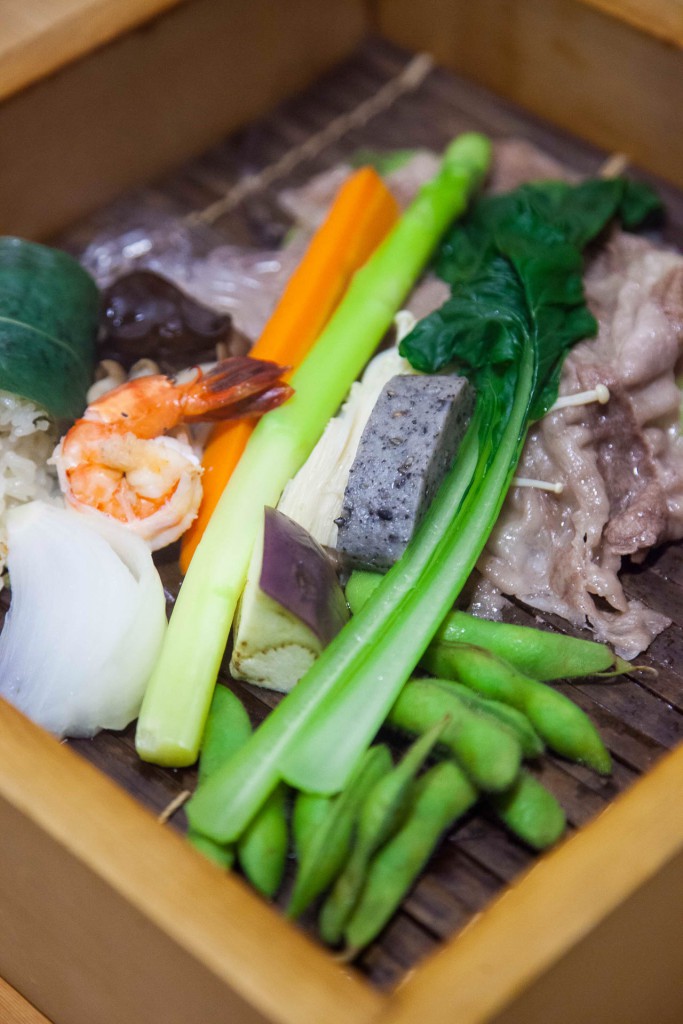 Traditional Shinano cuisine: The 30cm-square trays are loaded with freshly-picked locally sourced Nagano vegetables and placed over the steamer for a simple, healthy diet reminiscent of the Yayoi Era.The wood framed trays are made of Sawara Cypress from the Kiso Valley. The thin slices of Shinshu beef is paired with vermicelli, asparagus, and rice. We were given ponzu sauce for dipping but honestly it was not needed when everything was perfectly steamed and so fresh. 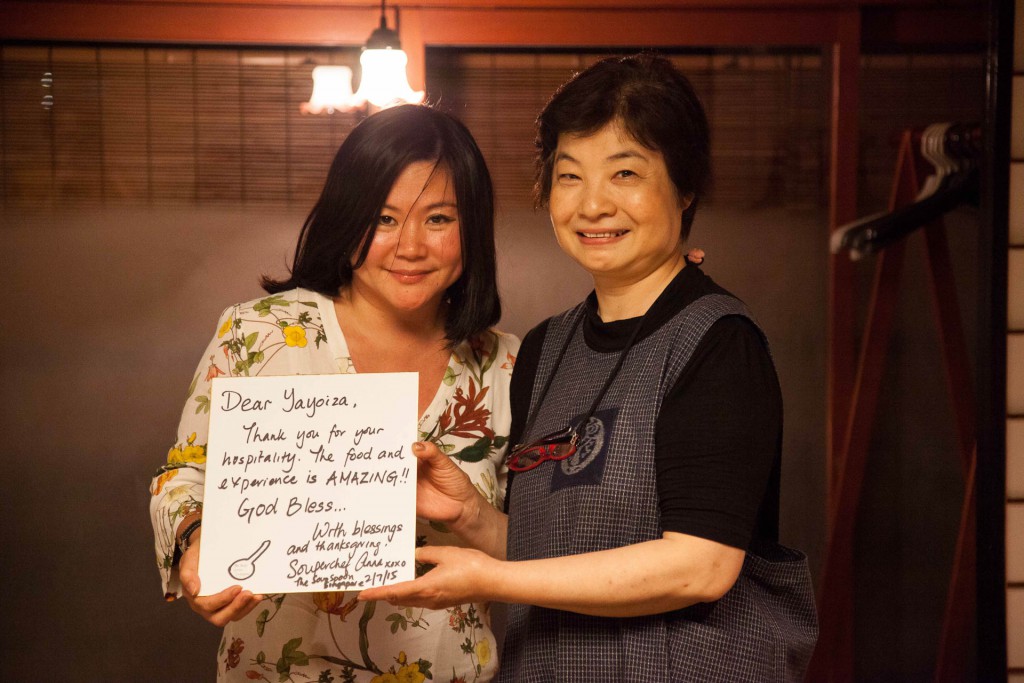 It was a surprise when the landlady, Kumiko san, in perfect English asked whether I would like to pen down a few words for her restaurant. I was like ME? LOL! So my first ever well wishes being penned down. I felt honoured indeed. The experience we had, the food she served was nothing short of AMAZING! 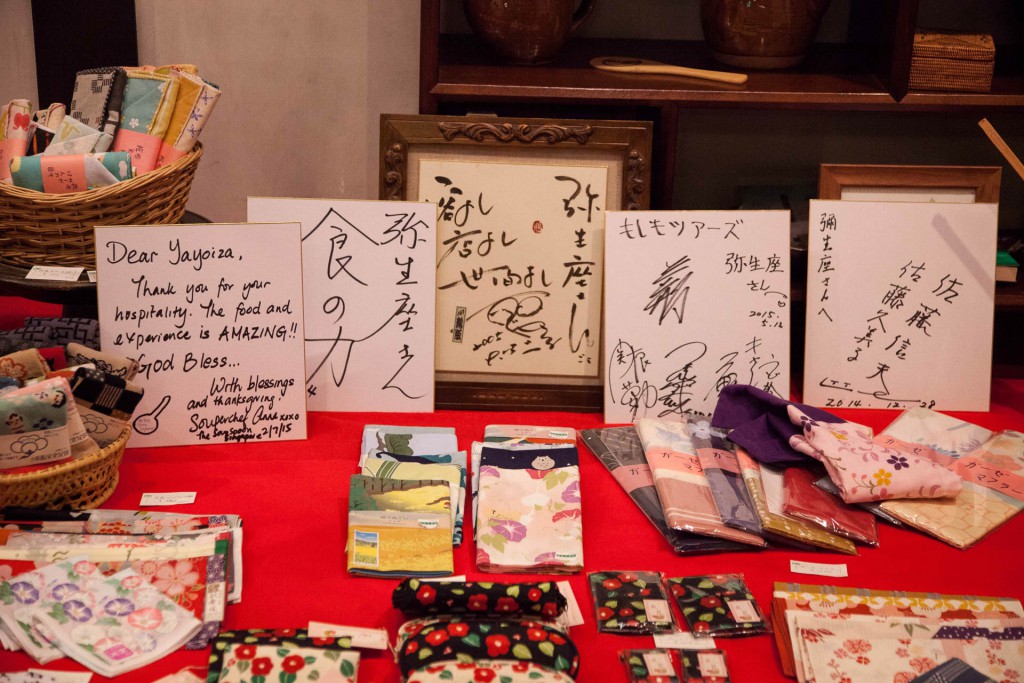 Traditional Shinano cuisine: Here my well wishes were displayed proudly by Kumiko san at the front of the restaurant together with those from the REAL CELEBRITIES!

This was indeed a wonderful Nagano experience, enjoying comfort foods traditionally eaten during the Yayoi Era. I really hoped to be back again someday to say hello and possibly learn how to cook from Kumiko san’s chef. Wishing her well in her dedication to traditional cultural cuisine of Nagano!