It was a beautiful sunny morning as we embarked on our third day at Perth. No rain in sight! Phew! A quick healthy breakfast before heading down south this morning consisted of granola with Greek yoghurt, Kelsey plums, strawberries, precose pears, figs and white nectarines and topping it all with a drizzle of wild honey. Really needed this after the heavy lunch yesterday. 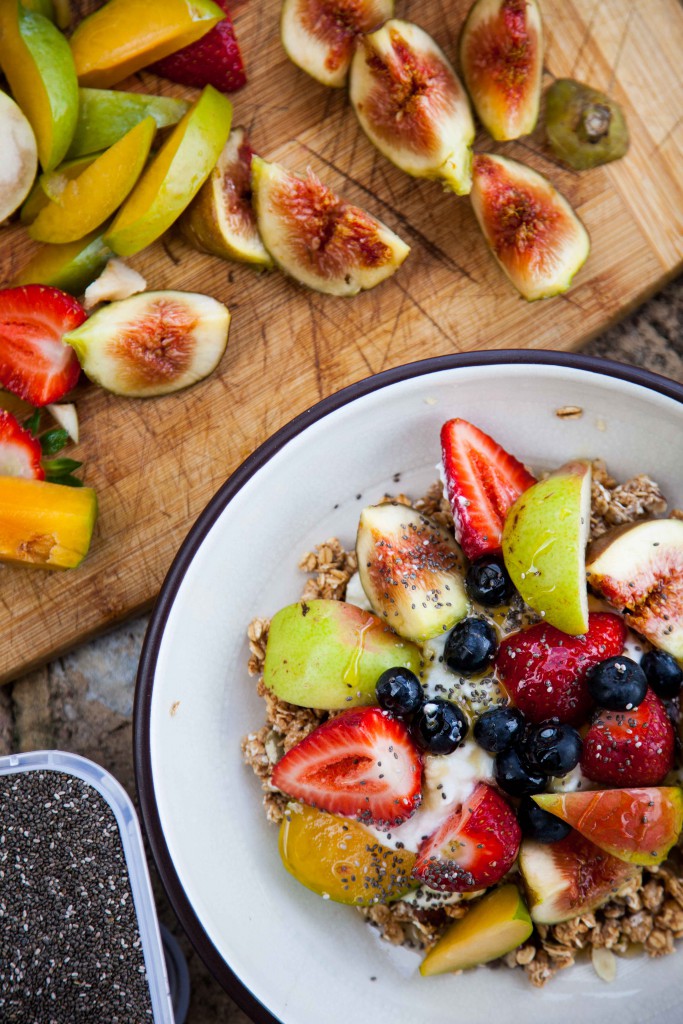 We did a pitstop to let kids play on the beach. Our initial plan was to go to the Dolphin Discovery Centre at Busselton but it seemed that the dolphins would not be coming in at all for the day. 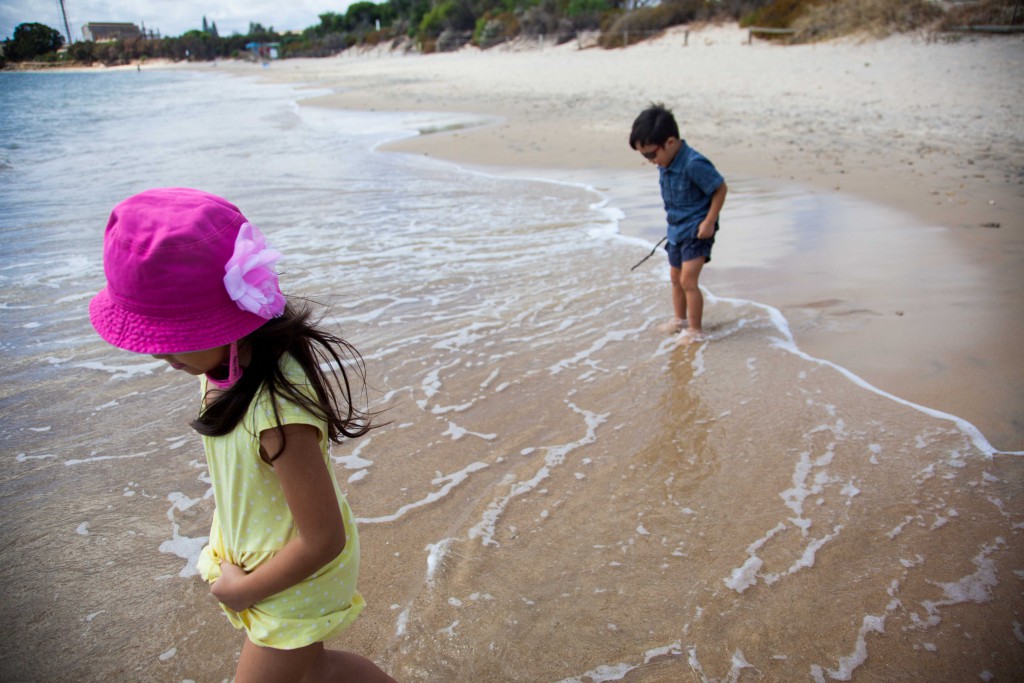 The beach babes at play.

It was almost lunch time and we headed to The Goose at Busselton.(Geographe BayRd, next to the Jetty).  It had a pretty beach bar and kitchen directly on the beachfront, with exceptional views of Busselton Jetty, Geographe Bay and Cape Naturaliste. I  loved the deck outside! It was windy and pretty chilly but the warm rays of sunshine made up for it all. A fuss free casual restaurant; you simply order at the counter and food gets served to you. 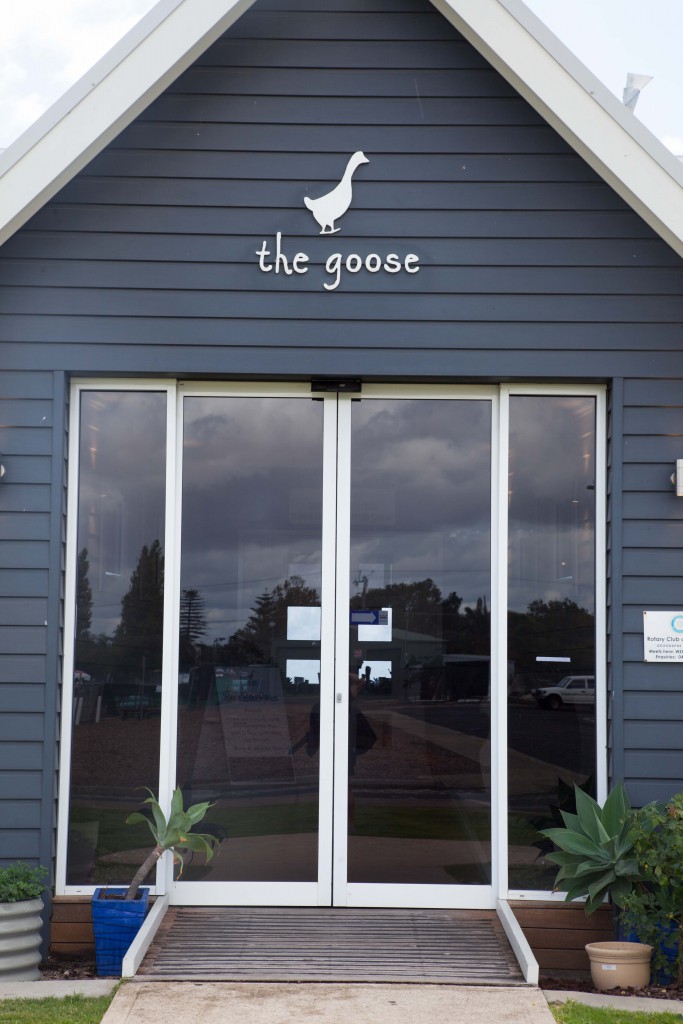 The blue timber strips mimic those of the one on the Jetty.

We ordered 3 portions to share: French-style mussels, double cream, white wine, fresh thyme served with grilled sour dough and saffron aioli. Food wise, it was a little salty to my liking. The mussels were executed well, but the sauce was a little too rich for me, but it was still pretty good. The kids, on the other hand, had the classic fish & chips which had a nice, crispy batter. Huge portions here so do not over order! Can be a little pricey but the view is well worth it. 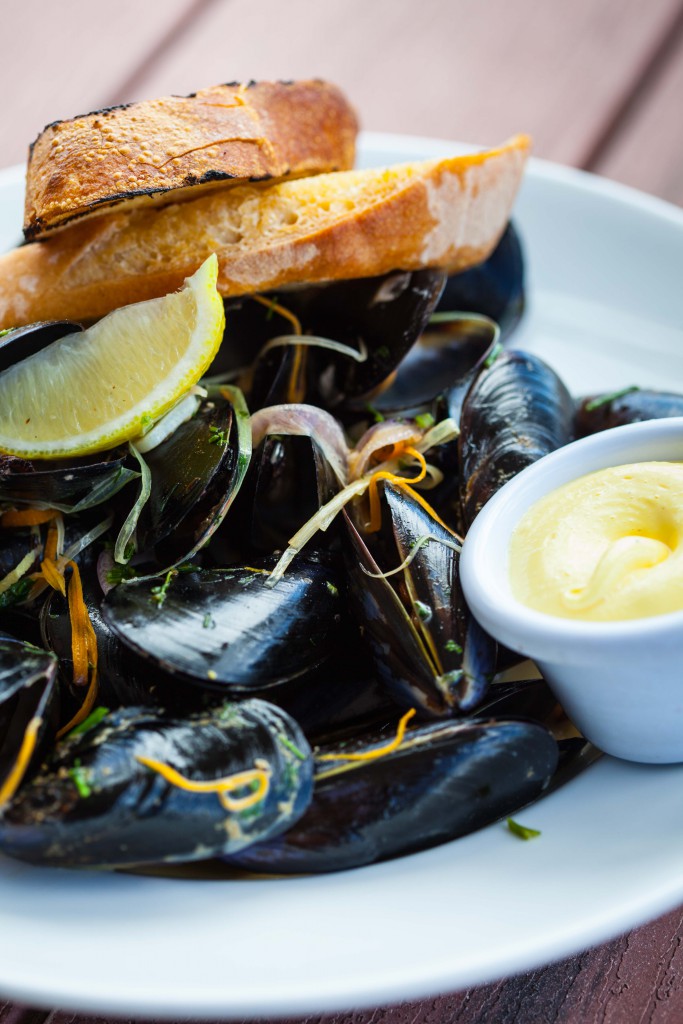 A big plate of French style blue mussels cooked in white wine, fresh thyme and saffron aioli. I think perhaps they could skip the double cream as it was just way too creamy. The mussels were really nicely done, not at all overcooked. 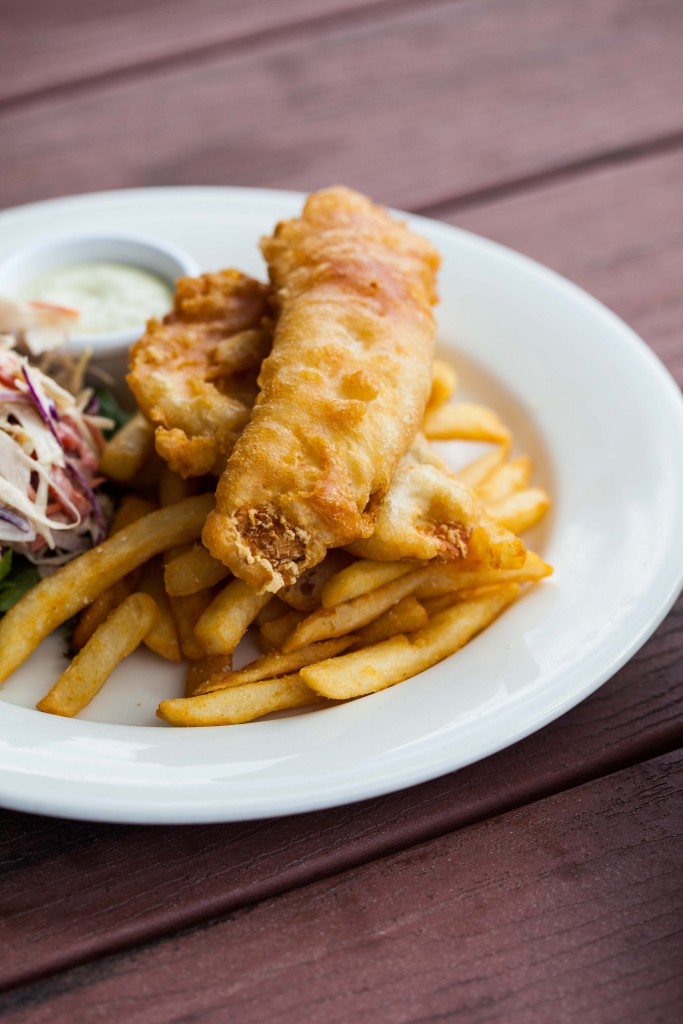 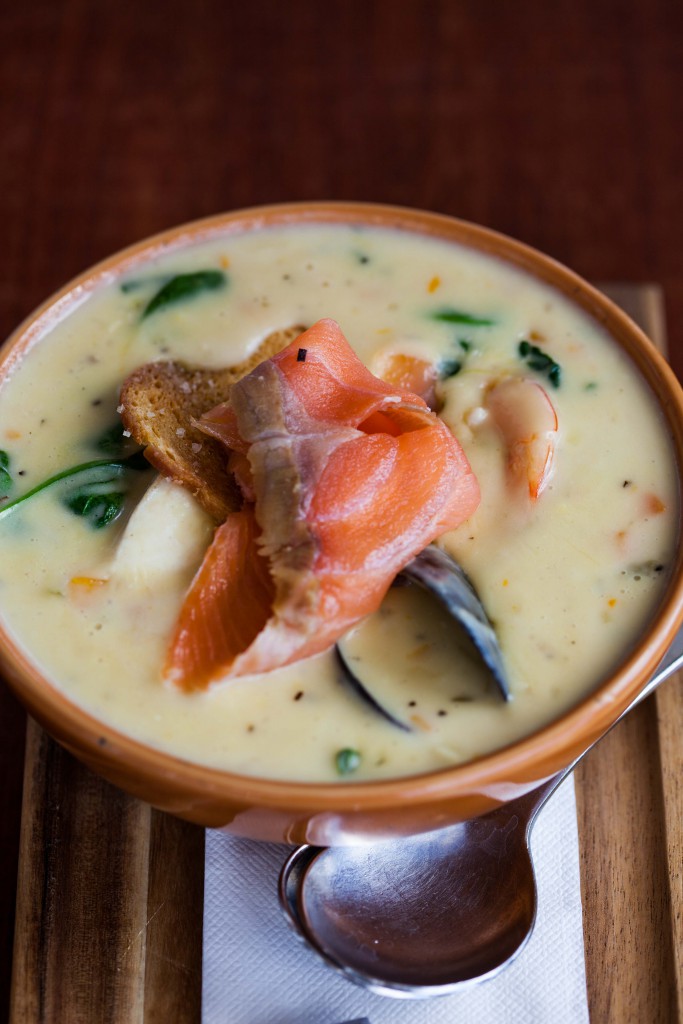 As a soup enthusiast, of course this is a must order! I would think this is a made to order seafood chowder. Pretty heavy in my opinion and a tad salty perhaps due to the smoked salmon. Good premium ingredients used hence the hefty price tag of $34.5 AUD. A little expensive as the portion was not really huge. But great to have tons of bread to have with this. The wilted spinach and the lemony taste made the difference for me.

Extending 1.8km over the protected waters of Geographe Bay, the heritage listed Jetty is the longest timber piled jetty in the Southern Hemisphere. I have read at the Interpretive Center that construction of the jetty began in 1865, but was only fully completed after 90 years with all its extensions. It was created to actually service ship vessels in the Port but once the port closed in 1973, the jetty was slowly left to its ruins and was battered really badly when it suffered the crippling effects of Cyclone Alby in 1978. The Busselton community through fundraising activities, managed to rebuild it to what it is today!  Besides just a heritage monument, the Jetty is an amazing testament of the spirit and dedication of the community.

Having visited Busselton Jetty umpteenth times, we actually never took the infamous train before being budget conscious Uni students and working adults previously. This would the kids first and our first as well. The weather was lovely, so why not? 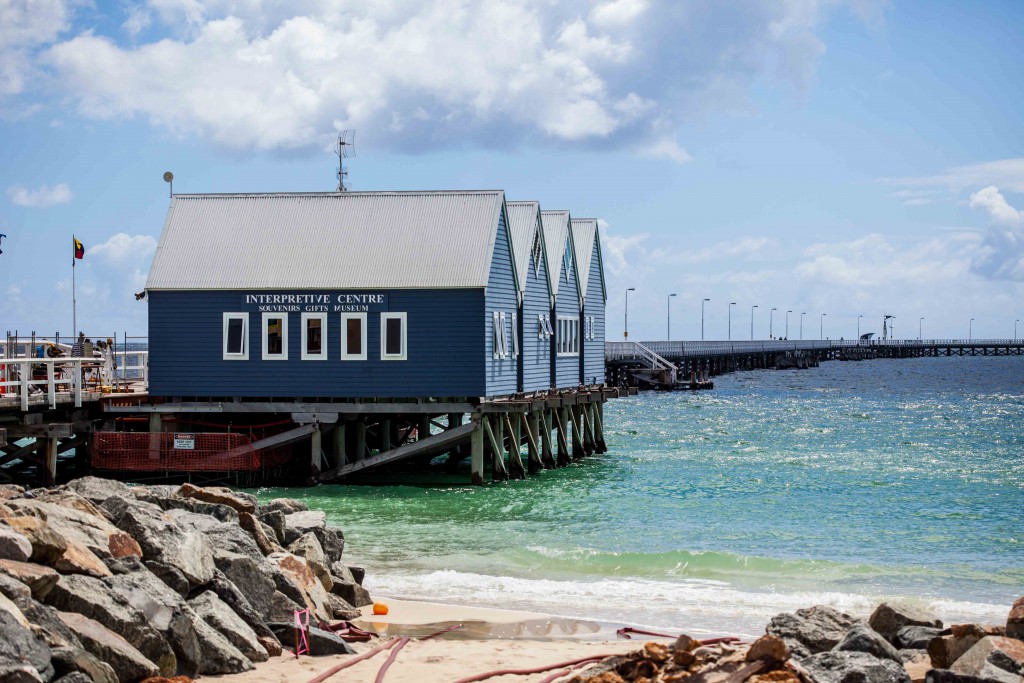 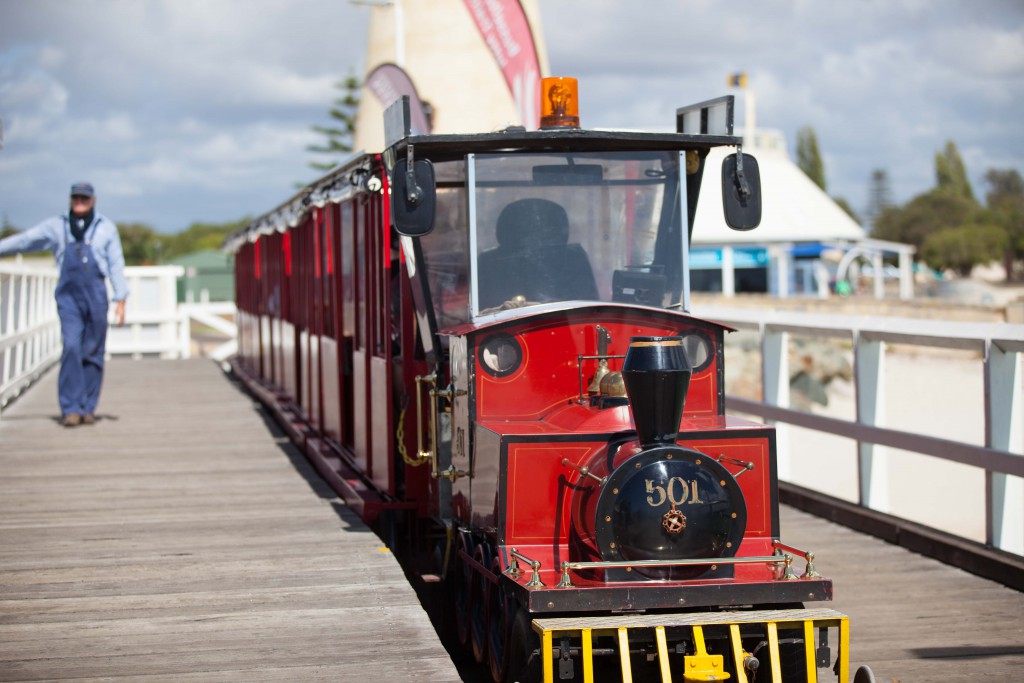 The short choo choo ride! Once we reach the other side, we only had perhaps 10 minutes before boarding the train back in the other direction. That is our train master in the background.

After the train ride, kids decided they were going to do levitation. We must have taken like a 100 pics of them jumping. No one was in a hurry and this is why we always love to travel free and easy, so we can take take our own time and not rush. If we needed to take longer at a certain place, we just stayed on. This freedom and flexibility is fiercely cherished and we do so hope our kids will grow up remembering these fun holidays we had.

Mama, Look i can fly! 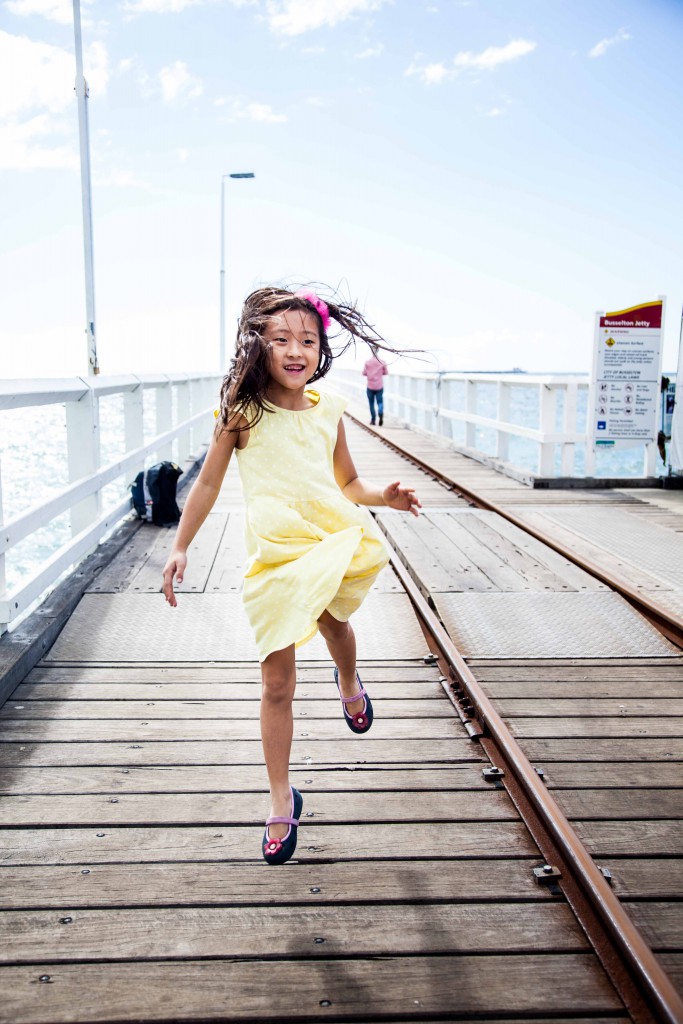 Hippety hop! Isabella is pretty good at this!

Our first winery for the trip: Cape Mentelle. It is one of the founding wineries in the Margaret River region and is currently under LVMH group of wineries. Bought a few bottles of wine. We would have loved to attend the degustation tour but unfortunately the tour guide called in sick. We stayed back for another ½ hour hanging out in the lawns, kids being silly and playing on the swings. 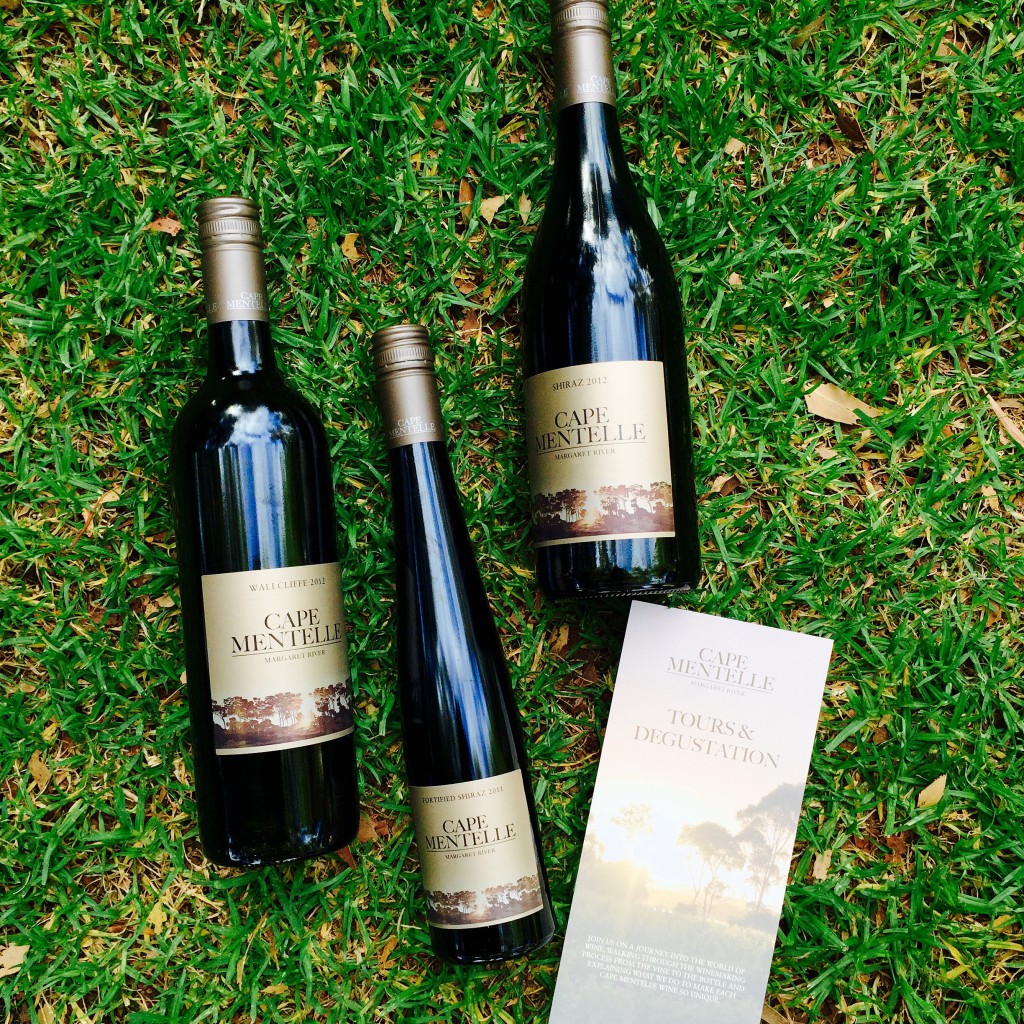 Our loot comprising of 2012 Walcliffe Sauvignon Blanc, Blanc semillon with lime undertones. Shiraz 2012, full bodied and peppery with a hint of plums. I am no wine connosseur, and friends who know me know I don’t really drink, probably due to intoxication during my hey days. But i do love bubblies and dessert wines. The last bottle, my favourite, a sweet dessert wine from 2011, made from Shiraz. Almost tasted like brandy!

The highly recommended wine pairing with food degustation, but was a bummer the lady conducting it call in sick for the next few days!

In the summer months, Cape Mentelle operates movies under the star at the sprawling lawns with wine and bar foods like pizza. Would have loved the kids to be able to experience it . Unfortunately with the looming cyclone and the expected downpour, the event was cancelled! 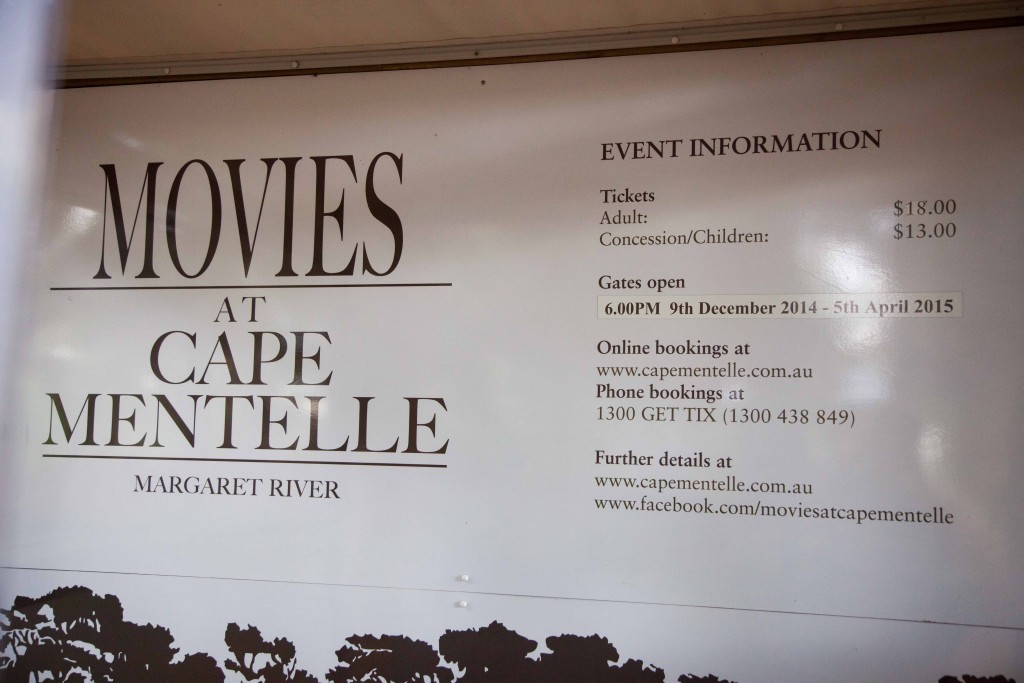 We checked in at Riverview Tourist Park, our home for the next 2 nights. 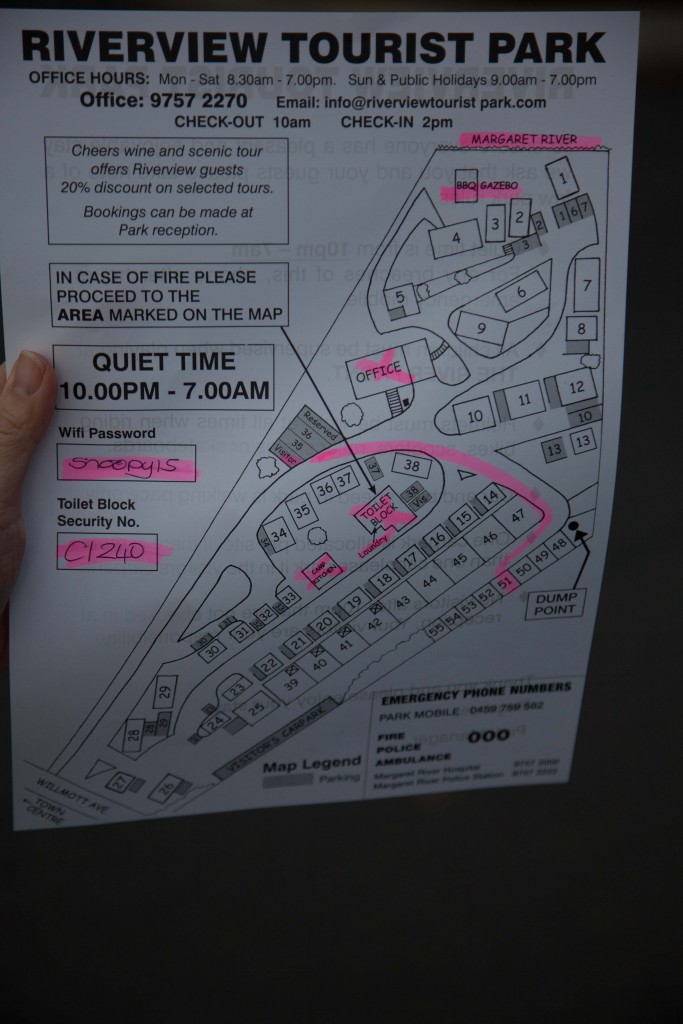 Complimentary wifi very essential! It was slow when everyone got on the bandwidth in the evening but hey it is free, but they did not promise it will be at lightning speed.

The front office, very typical of tourist parks. Usually, it is also a small supplies store, you can do tour bookings etc.

I must say that the campervan was pretty well equipped. It started pretty dramatic though, as the electricity was all discharged and we had no lights so it was a mad rush to cook dinner for 2 hungry kids! I made a mixed salad with heirloom cherry tomatoes, goat’s cheese and figs from Uncle Frank’s garden. Freshly squeezed lime and a dash of evo. Yums!

We eat well! All this beautiful and fresh produce that can be pretty expensive in Singapore. This would have costed us a bomb to buy heirloom tomatoes on the vine at Jason’s Marketplace. Mesculun mix, heirloom tomatoes, figs, with goats cheese.

The kids were craving for pasta so I whipped up something quick: Fresh linguine tossed with mushrooms, lean bacon, heirloom cherry tomatoes and finished with a little cream and a dash of white wine and freshly chopped parsley. For a quick campervan-friendly pasta, click here for the full recipe.

Fresh linguine pasta, seriously tasted like mee pok! Tossed with ham, mushrooms, heirloom tomatoes again and freshly chopped parsley. At 2.99 AUD for the fresh pasta that can fit four, unimaginable that it is more than 10 SGD in our local supermarket.

Saving grace was hubs actually brought along a torch light for the trip! We would be in complete darkness while we were having dinner if not for the torch light! The kids thought it was really funny and kept giggling throughout dinner and everyone took turns to hold the huge torch. Thank God as we were attempting to set up the bedding, the lights came on. The skies were so clear and as the night fell and as we looked up, we could see the twinkling stars  which we don’t normally see in our city of lights in Singapore. It was indeed a good memory not just for me, but for the kids, as well.