Whenever we go to a Japanese restaurant, the first thing we do is marvel at the fake food in the front window. My kids are very intrigued by them. So real, so fake, so detailed! Restaurants throughout Japan display these plastic food replicas as a sort of menu or in-the-street advertising. These replicas are a unique part of modern Japanese culture. On my first visit to Tokyo in 2007, I bought many of these little food replicas of sushi, tempura and even plastic mugs of frothy beer on a keychain as souvenirs for friends. I have always been fascinated with the art of sampuru (sample foods) and curious where did this tradition come from and how are these replica foods actually made. 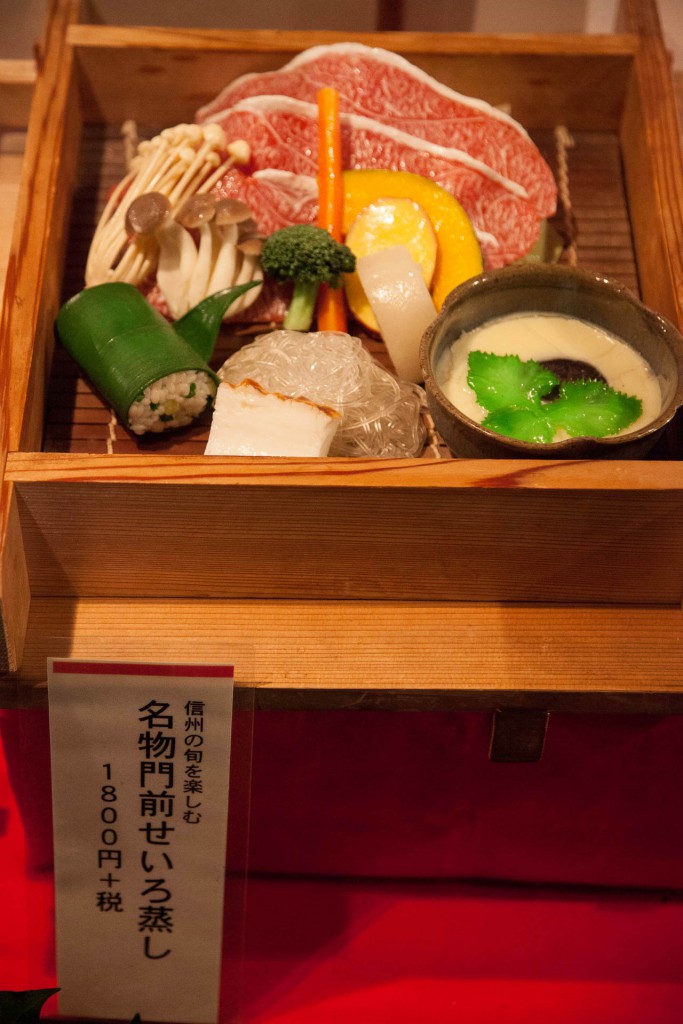 Replica food seen in a restaurant we visited . Everything looks so fresh in this bento box. It does showcase to tourists what we would expect to get for 1800 yen. It definitely helps us who could not read Japanese and the restaurant does not have an English menu. Sampuru are not cheap at all to make as the amount of detailing required. It can cost in the region of a few hundred dollars to have this box of replica food made.

An off the beaten track experience

I am souper stoked when I learnt that we will have the opportunity to visit Gujo Hachiman, the home of sampuru. The food replica-making industry in Gujo is the largest in the nation and over 60% of them are still made in Gujo Hachiman to this day! The father of food replicas – Takizo Iwasaki – was a native of this town, and it was here in 1917 that he had his critical epiphany. As the story goes, as a child, Takizo saw a drop of hot wax fall from a candle into a puddle of cold water and was struck when, upon touching the surface, the drop bloomed into the shape of a gorgeous flower! This image would stay with him and become his inspiration as he aimed to develop a realistic way to mimic the appearance of food. In 1932, he founded the company today known as Iwasaki Co. Back in those early days, wax was thus used as the replica material, but today modern technology has taken on a much greater role. Vinyl resin is currently the preferred ingredient, as it is both longer-lasting and more malleable than wax! 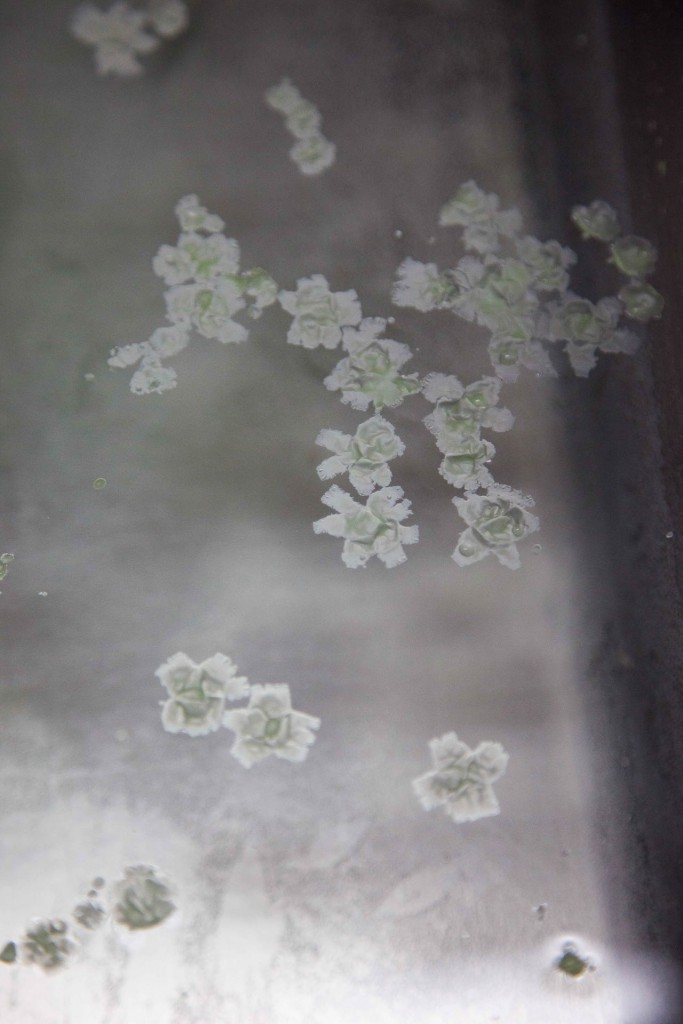 Takizo Iwasaki is credited with creating the first food sample early last century. Initially inspired by the shapes formed by candle wax dripping on a tatami mat, he subsequently molded a wax rice omelet in Gifu Prefecture in 1917.

Housed in a 150-year-old building, this food replica shop is one of the most popular destinations in Gujo Hachiman. When we entered the store,we were greeted by all these food replicas in the form of fridge magnets and keychains. They have cup ice cream replicas, sweet tarts, chocolate bars! Sample Kobo is the first food replica workshop in Japan for tourists and visitors and they have been doing so since 1991. I really like their motto, to create smiles of satisfaction and delight on customers’ faces. Carefully sculpted to look like real dishes, fake food actually makes you salivate. Today it is a recognised art form in Japan and handcrafted replica foods can cost a bomb for a full menu. 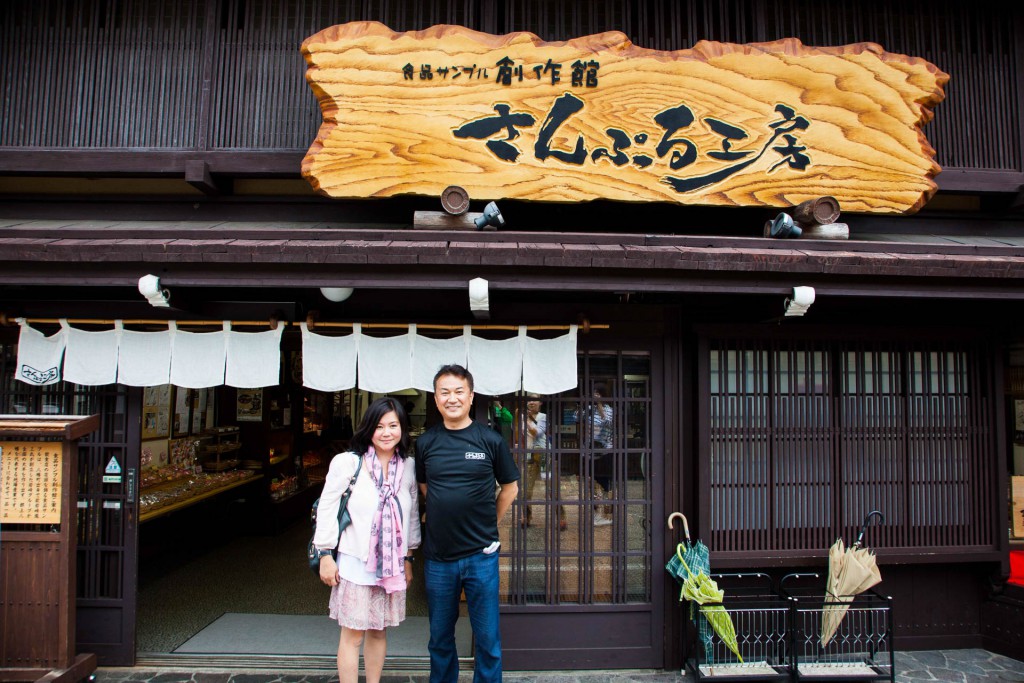 Meeting the Food Replica Master and the President of the company, Katsuji san. It takes over a decade to acquire the necessary repertoire of techniques, and the path to becoming a master is really no different than any traditional Japanese craft, from wood carving to lacquering. He is pretty famous . We actually have to wait for our session as he was doing a TV show for a Japanese variety programme! 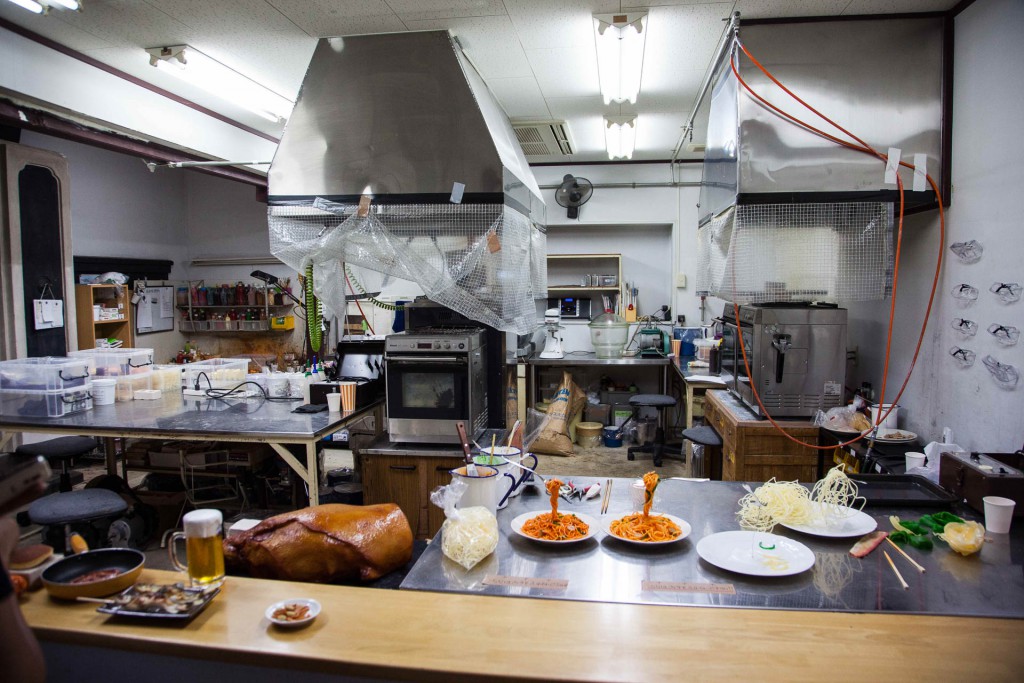 At the back of the store is the workshop where all the sample foods are made, and it is arranged so that customers can come into the room to catch a glimpse of the production process. 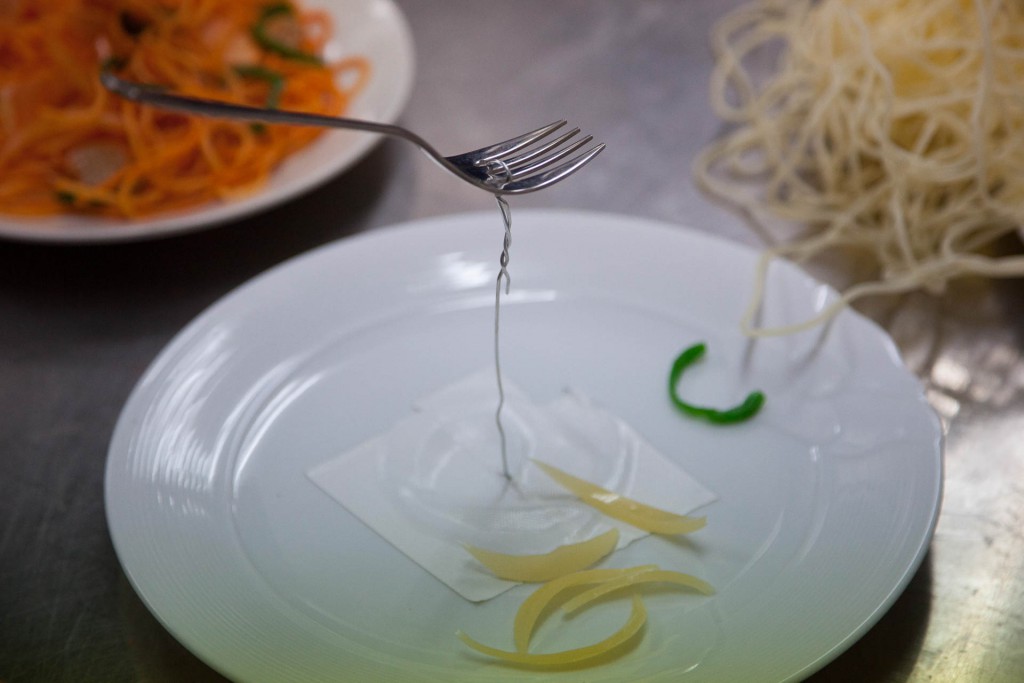 In action, the making of spaghetti pomodoro food sample. It is getting very trendy these days to have the utensil suspended in the air and through this, we could see that it is actually held by a stiff wire. Katsuji san shared with us, to make the food as real as he could, he needs to do a lot of research, real pictures of the food in different angles and lighting so he can truly capture the “deliciousness” of the food. There is paint brushing involved to get the colour right. Each of the elements for the spaghetti pomodoro have to made separately before putting it together. 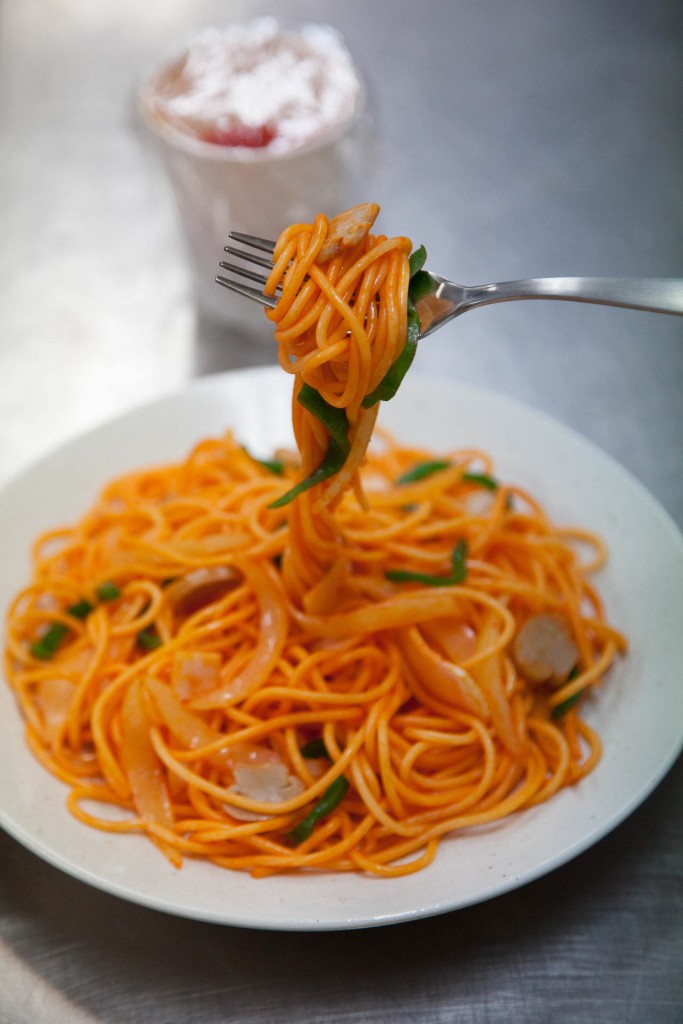 The almost real looking sampuru of spaghetti pomodoro with mushrooms. Though sample making is true handicraft with traditions, it is innovative too! As can be seen here, food replica artists are no longer restricted to foods in a bowl or plate, but creates replicas that freeze moments in time – such as a suspended fork over a plate of pasta or a bowl of ramen spilling over . 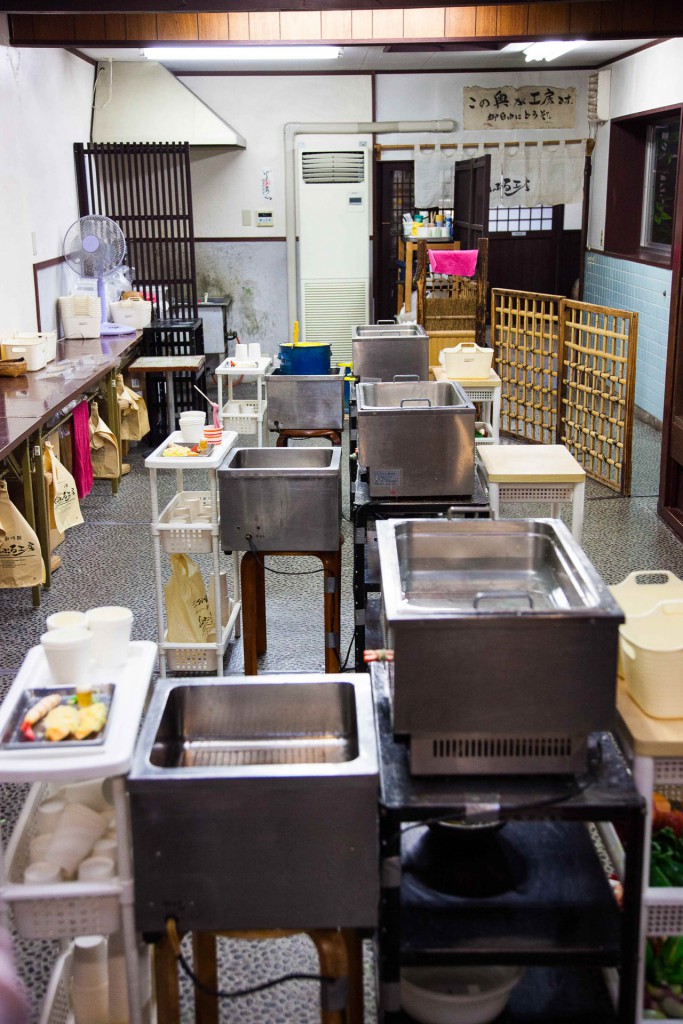 The hands on workshop area is very well equipped.

I was pretty excited to get started. We made tempura batter from yellow parrafin wax, using it to coat pre-prepared fake food items like shrimp, eggplant, peppers, and pumpkin slices. We created the koromo, or fried tempura coating, by dripping the wax from high above the water to achieve the crisp and crunchy look of the real thing. After that, we submerged the preformed coating under the water and wrap it around our chosen filling.  To make a prawn tempura replica, liquid wax is dripped in strings from a paper cup at a height of about 60 cm into water heated to about 40°C. The key point here is to drip the wax from that exact height to make the tempura batter.  Truly fascinating how it mimicked to almost 100%. 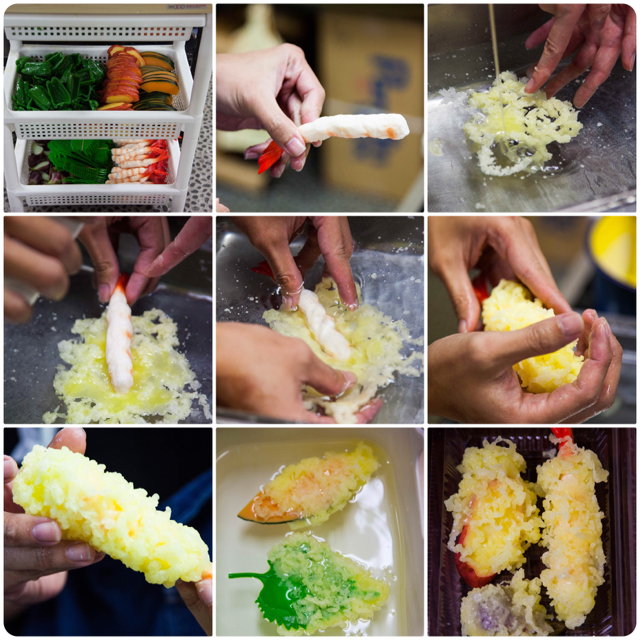 The wax spreads out unevenly on the water surface, turning into a bumpy sheet. Once formed into the right shape, we have a tempura replica that looks like it would be crisp and crunchy to eat. This was the hardest part, the dripping of the wax from the paper cup! I had the tendency to raise it to high. It must be perfect in order not to get too thick a batter around the shrimp and worse when it actually lacks the crunch and the crisp look. We were told to only half wrap our vegetables and to coat it lightly to mimic the real tempura vegetable where part of the vegetable used is exposed.

The  instructor also demonstrated how to make a lettuce before we took our turns. She started the process by ladling white wax onto a stainless steel bain marie with water at 40°C to form a puddle on the surface. Next, she made the puddle larger by adding another ladle of green wax on one side of the white before pushing the floating mass away to the far side of the bain marie. Here came the magic. Taking both sides of the white section between thumbs and forefingers, she pulled it slowly downward underwater and back towards her. As the wax was still warm, it stretched  to three or four times its original size. Lifting the delicate sheet of wax out of the water, she took the white part and scrunched it up to make into a ball. This was the core of the lettuce. Next,  she wrapped the green wax around to cover it, in a folding manner, alternating between left and right, until she had a complete lettuce. 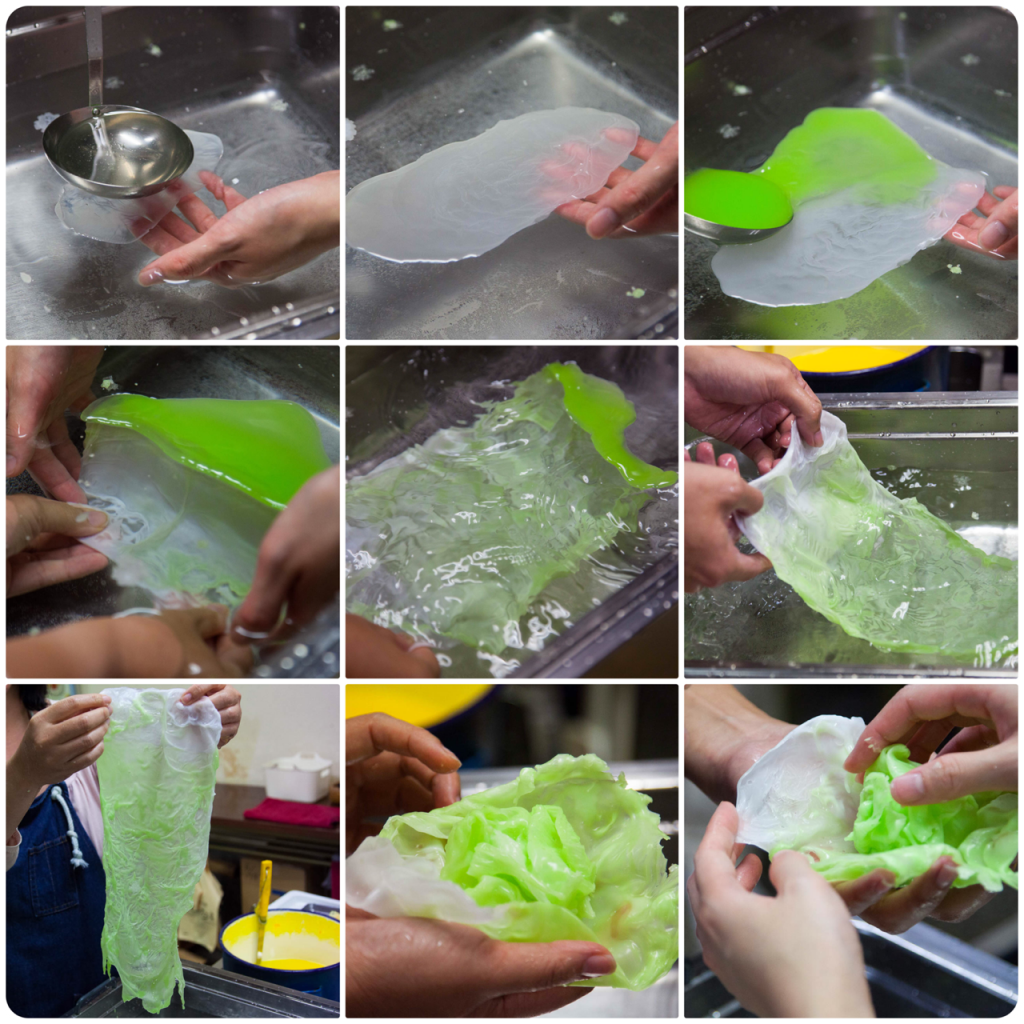 A collage of pics of making the lettuce. This was one amazing experience. I just could not believe how real it was. The crunched up lettuce looked so fresh. The colour was perfect. I felt like a real artist !

After the replica making exercise, we bought a lot of souvenirs home. A particular one that I really loved has to be this one. 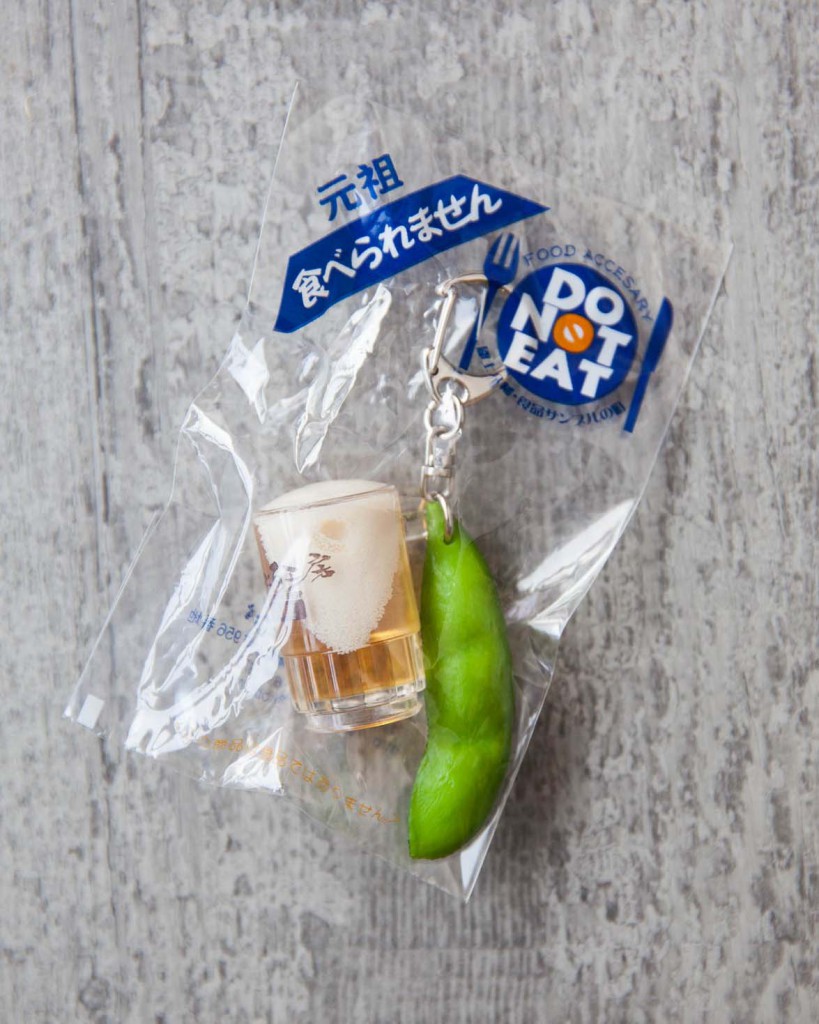 The beer looks so unreal! They had little bits of sytrofoam suspended in the sealed mug, and every time it gets turned, the “foam” would move! The edamame ! I wanna eat it too!

We had the opportunity to walk around Gujo Hachiman and  thought I just share some highlights of this beautiful place. Gujo Hachiman offers visitors an authentic small town Japanese experience, where the traditional way of life has changed little over the years. It is a small historic and beautiful riverside town in the Gifu Prefecture that often gets overlooked by tourists. Often called “Little Kyoto” due to its many temples, it is possible to explore the quaint little town on foot without the large crowds of Kyoto. We visited Daikokuya Miso here too, an artisan mamemiso maker. 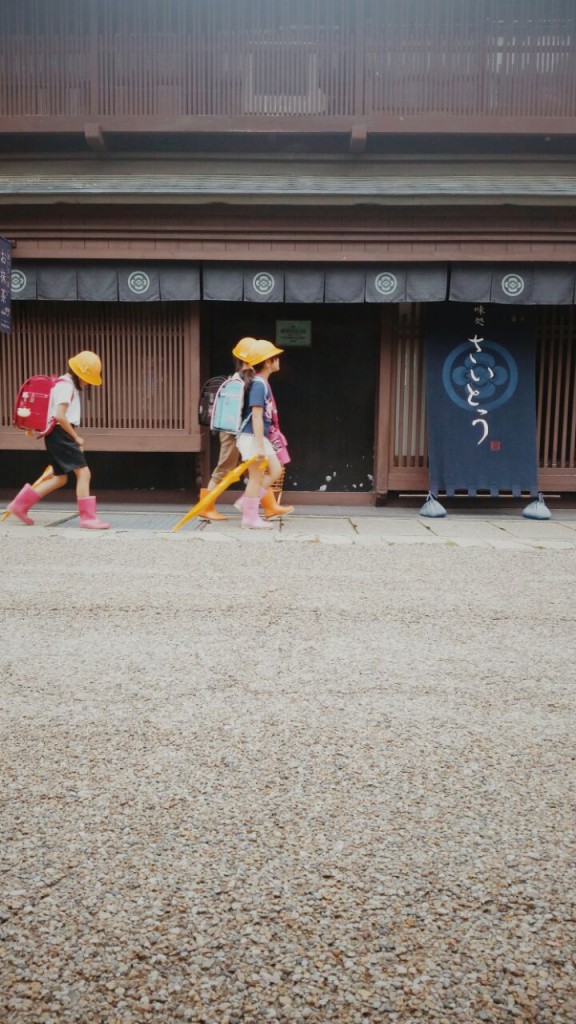 Here the traditional way of living is on a very human scale. People passing each other in the street still greet each other with a small bow, and exchange a passing greeting. The children were really cute seen here walking home after school in their rain boots, hats and umbrellas. 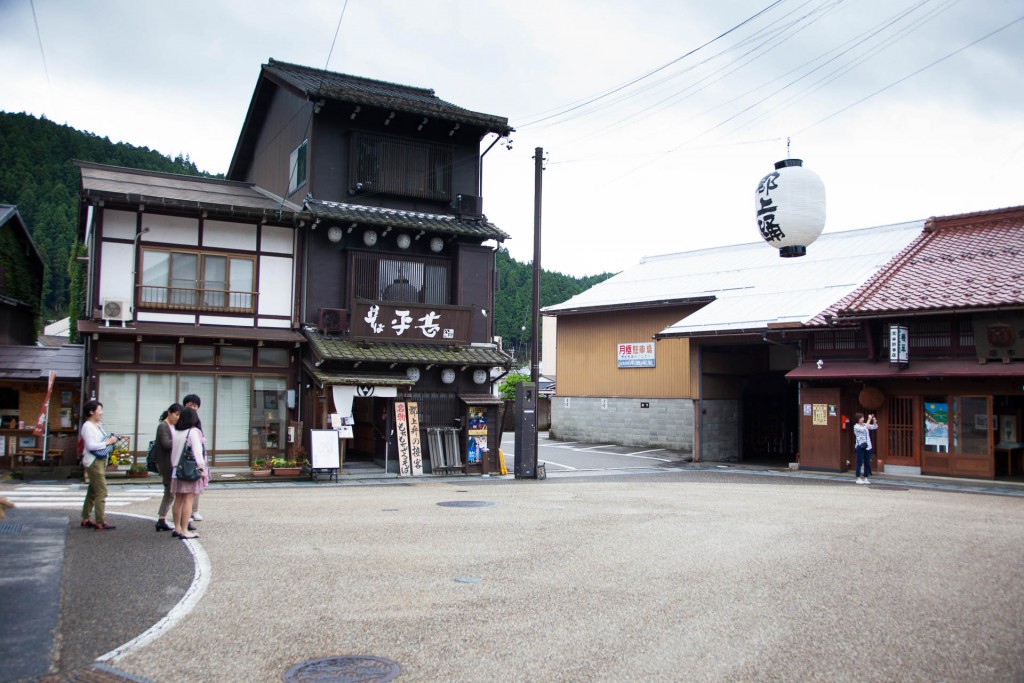 Gujo Hachiman is famous far and wide for the Gujo Odori Dance, one of the most famous traditional dance festivals in all of Japan dating back 400 years. Our host told us that for three days from 13/8 to 16/8, 10,000 people join in the all night long dancing. As the town is pretty small, most would come and sleep in their cars due to shortage of rooms. There are many quaint shops here and it truly seemed life is a standstill. 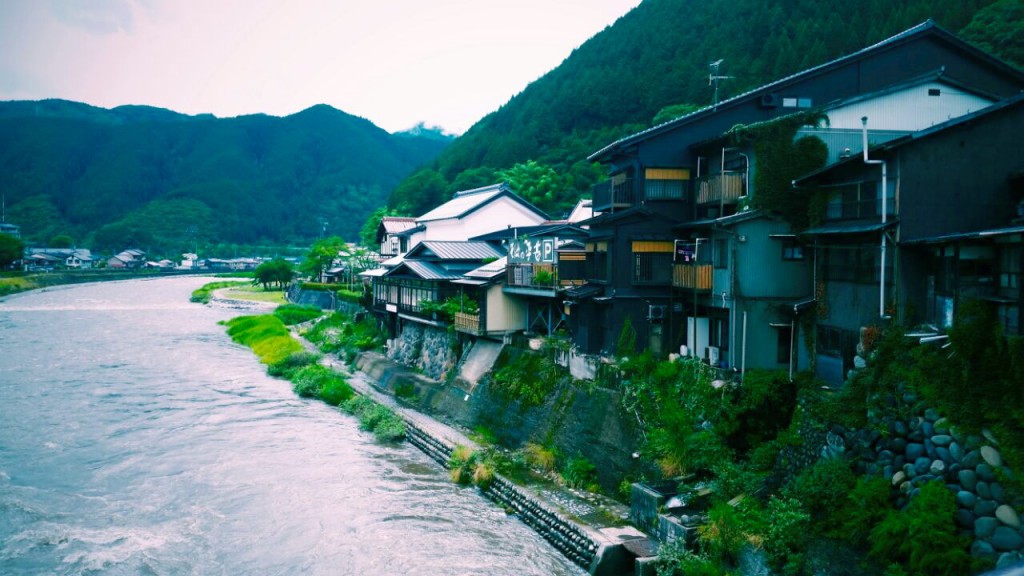 Riverside summer houses feature large semi-enclosed verandahs that overlook the Yoshida river. Designed to catch cool summer evening breezes, these houses are the perfect escape from summer heat, and many are still used today as summer residences and to escape the city on hot summer days. It is a mountainous region that sees a fair amount of snow in the winter months.

A stroll along the old streets and among the quaint town’s many temples and shrines is a wonderful way to spend an afternoon in Gifu. Sodecabe, or “sleeve walls”, are architectural features on the upper floor of many of the narrow closely spaced Edo period machiya houses in Gujo Hachiman. These dividers extend out from the edge of the house and down from under the roof. They form a privacy partition from the neighbouring house, provide additional fire protection, and support large heavy roofs, especially when laden with snow in winter. 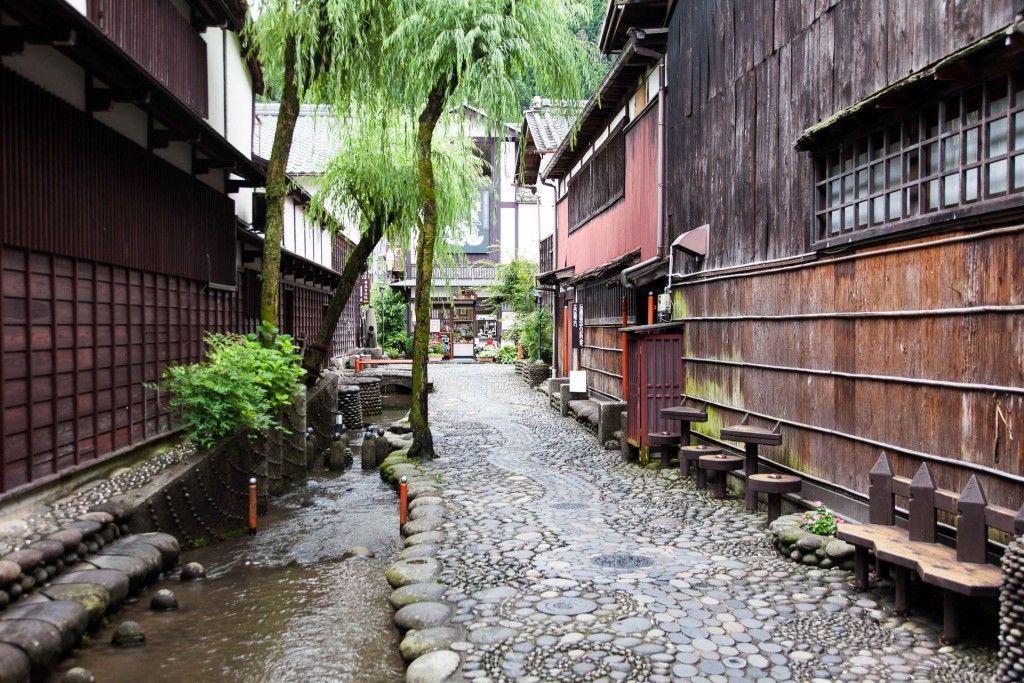 There are many small canals lining the roads through-out Gujo Hachiman. These canals represent the strong bond that exists between the town and its clear water. They were originally constructed for fire-prevention purposes, but today are used by the locals in their daily lives. In a lot of these canals, we were really surprised to see see Japanese koi (carp) swim against the currents.