Just two months back, I had one of the best home-cooked Brazilian meals, the Moqueca Capixaba. Moqueca is a classic dish from Brazil, and there are two main styles, Baiana and Capixaba. The Bahian version is characterized by seafood, coconut milk, peppers, onions and tomatoes. Usually moqueca is coloured to a rich brick red by dende oil, an African red palm oil. The Capixaba style hails from the state of Espírito Santo and is influenced by native Brazilian cuisine dating back over 300 years and does not typically contain coconut milk or dende. The stew is traditionally cooked in a pan called Panela de barro (clay pot) – still made in the same techniques as the native Indians of Brazil did centuries ago.

A cooking lesson with Rogerio, the Singapore edition.

In the state of Espírito Santo, which hugs the Atlantic coastline of Brazil between Rio and Bahia, seafood, fish, and crustaceans form the backbone of the cuisine. Espírito Santo is best known for its Moqueca Capixaba. Unlike the moqueca popular in Bahia, here the seafood stew is seasoned with urucum (achiote or annatto), a pigment that gives it a reddish color.

Moqueca at Aprazivel in Rio is closer to Moqueca Capixaba from Espirito Santo, a version made with sliced onions, tomatoes, chillies, a little coconut milk. This reminds me very much of assam fish. Always served in black clay bowls. 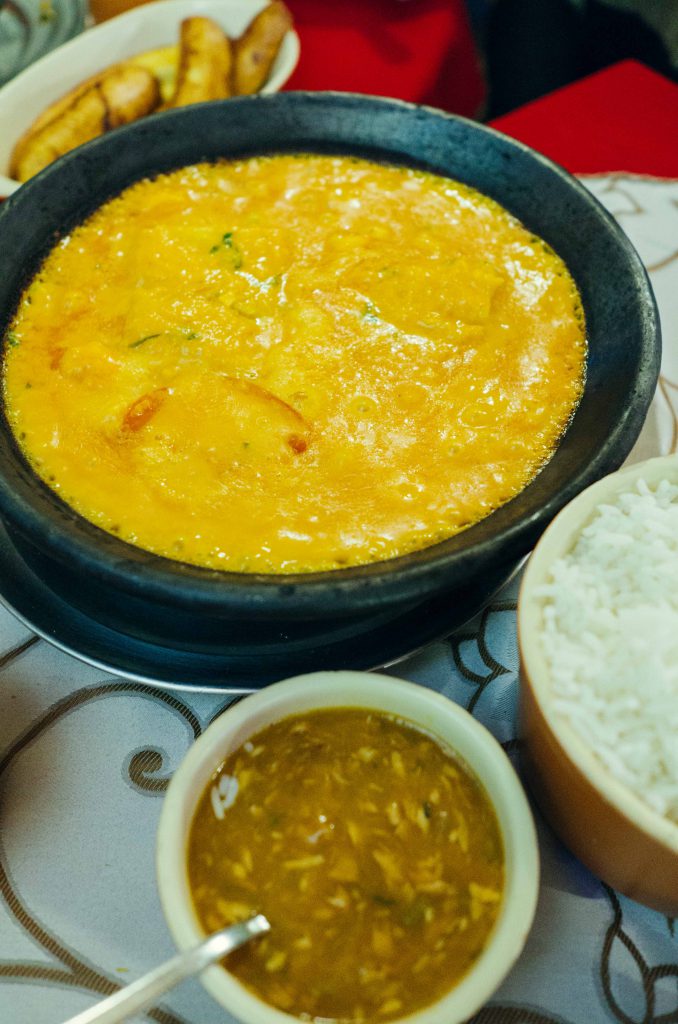 Traditional Moqueca Mista, Baiana style using coconut milk and dende oil. This is a much richer version and reminds me very much of Indonesian food. Seen here served with pirao, a kind of fish stew mush thickened with manioc flour. Typically made with dourado e camarao which is big saltwater fish.

We were most privileged to have met Rogerio in Singapore last year. A jolly and talented man, Rogerio was a fantastic cook! A passionate home chef, he is very influenced by his aunt’s cooking, and we were honoured when he came over to our place and taught us his aunt’s recipe of Moqueca Capixaba. Over the cookout that Rogerio has generously availed himself to, we learned how cooking was the glue to his family and his language of love.

A cookout session with Rogerio, teaching me to make a Brazilian recipe that has been a family tradition. Thank you for your friendship!

Our version is a mashup between the two styles made with locally sourced barramundi fish from Kühlbarra, peppers, tomatoes, tapioca, lots of coriander and a little coconut milk to finish it off. A gorgeous Brazilian stew steeped so deeply in love and stories. Thank you Rogerio for the inspiration and for sharing your recipe with me!