A traditional arajiru made with fish bones. 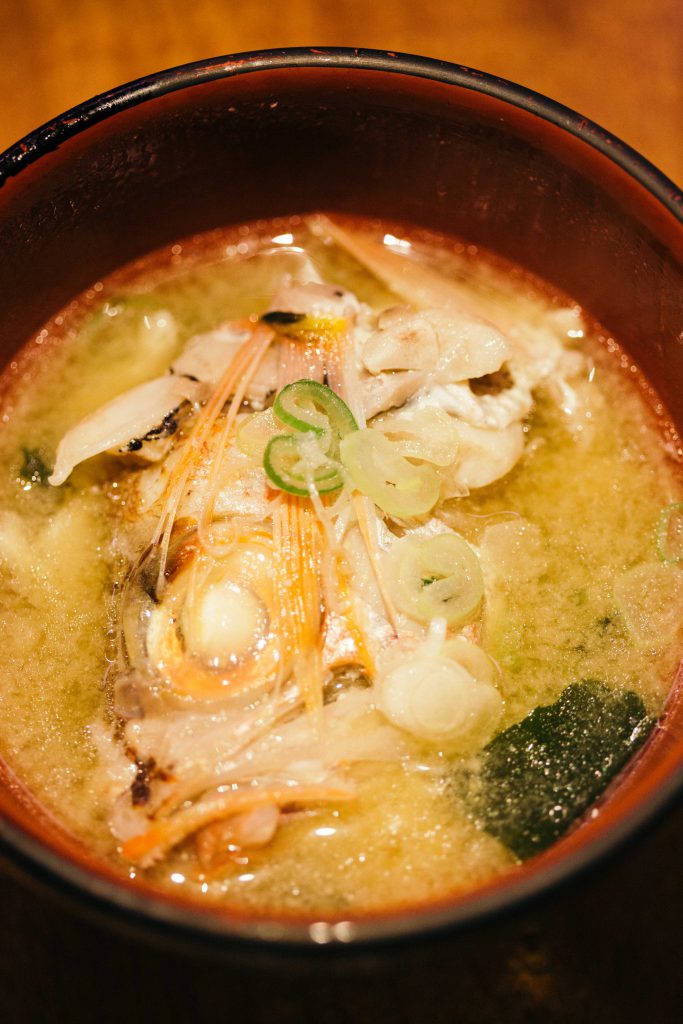 A bowl of miso soup is one of the simplest and most comforting things to eat. It is a staple of the Japanese diet that’s easy to find. At its most simple, miso soup is just dashi and miso. I have read that the goal of any good miso soup is to balance ingredients that float and ingredients that sink in the soup. Vegetable and tofu ingredients are most common. It’s also common to add fish.  We had many bowls of miso soup but one that excited me most was the Arajiru, essentially, a miso soup made with kombu bonito stock but with the addition of fish head and fish bones that had been char grilled. In Japan, nothing goes to waste. Sashimi slices from the fish and the leftover carcass is used to make this delicious soup. The grilling of the bones before making the soup is definitely a marvellous technique for making soups less fishy and imparts a char smoky flavour to otherwise a plain simple miso soup. Sometimes the simplest food are the most soul satisfying.

The yuzu is a Japanese citrus fruit hailed as a superfood — often likened to a lemon crossed with a mandarin orange. The flavour is quite distinctive, resembling that of a grapefruit, with overtones of mandarin orange. It is rarely eaten as a fruit. It is sharp and acidic, with heady blossom notes. In Japanese cuisine, it is often added to a ponzu sauce, or mixed with honey to sweeten teas. As chefs from Michelin star restaurants seek to wow their customers, yuzu was touted as the next big thing and crept into more Western kitchens, its uses are becoming ever-more diverse, from salad dressings to salmon glazes, jellies and sweet curds.

My teachers, Mamami and Sahara who taught me how to make the guizoni.

On our 2nd day of our trip in Kyushu, I learnt how to make the traditional Shimabara Guizoni, a traditional chicken and vegetable soup. Apparently, every family has their own recipe depending on how mum makes it, but a must ingredient is the big round rice cakes (mochi). This soup is typically eaten during the new year. According to my teacher, Sahara san, one has to eat rice cakes according to one’s age. At 76, she still eats 76 of them, but over a period of 3 days. Mochi, or Japanese rice cake, is made by pounding hot, steamed mochigome (glutinous rice) into paste and molded into round or cut into square cakes. Glutinous rice, sometimes called sweet rice, is used in rice dishes where more stickiness is called for. Traditionally, the cooked rice is pounded with a wooden mallet (kine) in a mortar (usu). Two people alternate the work, one pounding and the other turning and wetting the mochi, keeping a steady rhythm lest they accidentally injure one another with the heavy kine. As it was tedious to do this, hence it was only eaten once a year during the new year.

Shimabara Guizoni made with rice cakes

Kayano, my host from Komatsu’s comfort food is her mum’s arajiru

This is our second time working with Kayano, first was last year when she was our host. Our second time working together, I got to know her better, listening to her stories, what were her aspirations. She was an avid traveller, having travelled 40 countries and 17 countries  were done in 7 months when she backpacked in 2011. She shared that it was after the tsunami, she came to the realisation that life is short and there was so much uncertainty, she decided to see the world and not regret it. Her dad passed away when he was 65, she could not help but feel at 33, she was already at the half way point, and she did not want to go through life without experiencing it. I really admire her as she only spoke a splattering of English and she had the courage to travel to the ends of the world visiting countries from Jordan, Brazil to Morocco. While travelling, there was one food that she truly missed, was her mum’s arajiru. It was her comfort food.

Our version is inspired by Kayano’s comfort food, the traditional arajiru and shimabara guizoni . Our miso soup is made from charred Kuhlbarra barramundi bones and kombu to make the base stock, added citrusy notes of lemon and yuzu, giving this miso soup distinctive notes of sharpness and acidity with floral notes, cutting the fishiness of the barramundi bones stock. Kombu, a type of Japanese kelp which resembles very dark leather, and comes in large flat sheets provides the hit of seaside flavour and adds an extra umami depth when combined with the barramundi bones. The arajiru is packed full of flavour and has a clean yet complex taste. It is probably the best tasting miso soup I have ever created. The addition of the mochi and tofu made this soup more filling, propelling it from just being a side dish to a main meal. 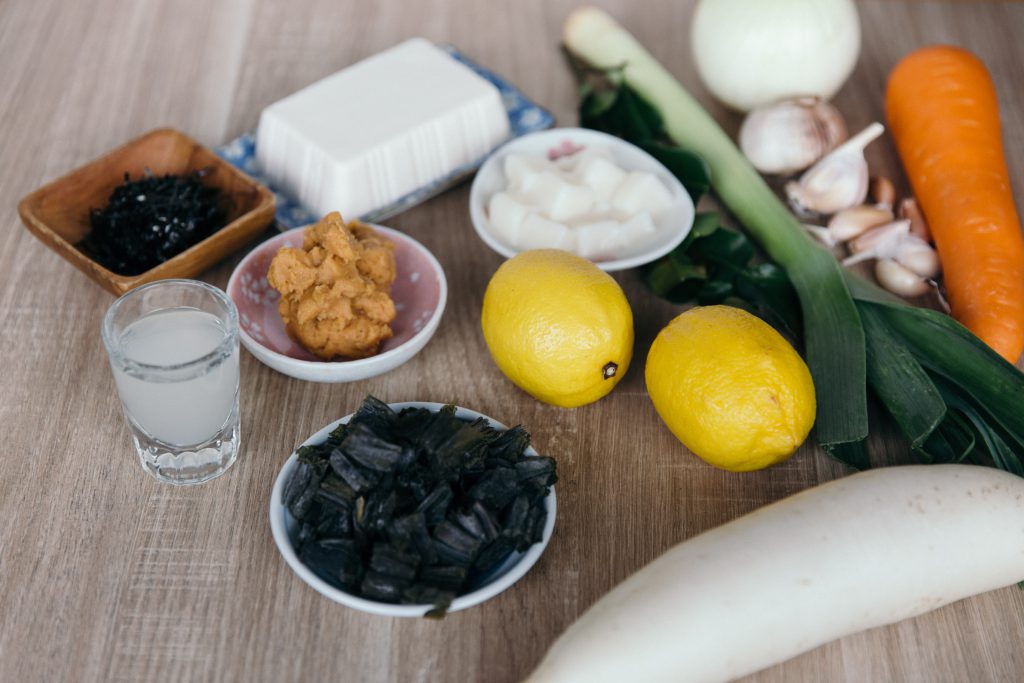 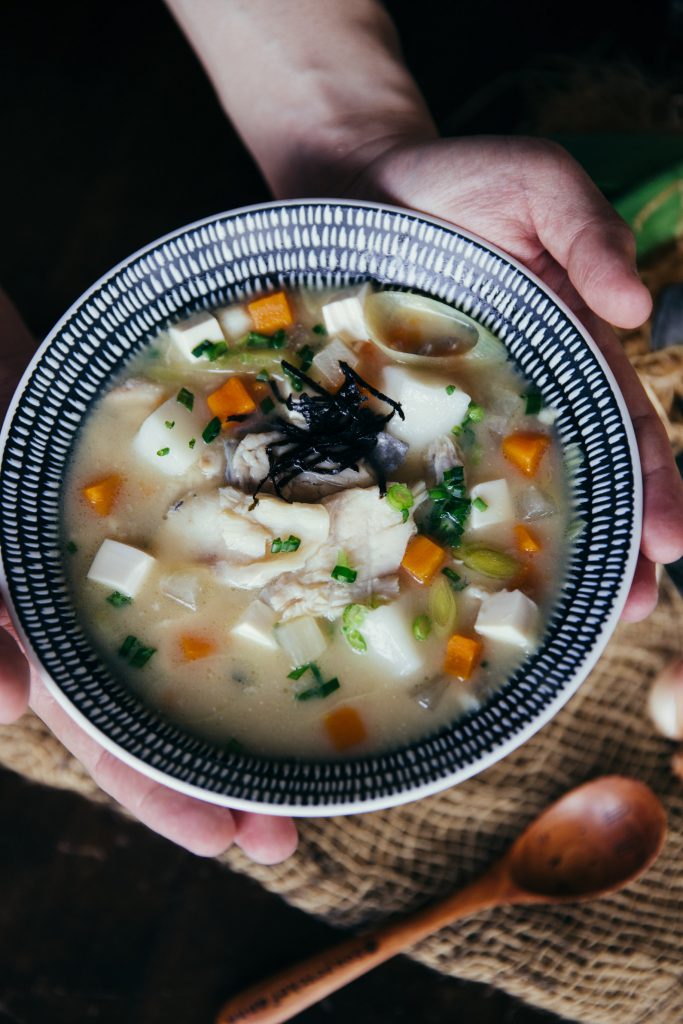