We arrived in Kyushu on a cool rainy day despite it being mid summer and the first meal we had was Nagasaki style champon ramen. It was especially comforting and kind of reminded me very much of home as it almost felt Chinese yet it was Japanese.  Champon is a Chinese style noodle dish of pork, seasonal seafood and vegetables-all panfried in lard. It can be loosely translated “random mix.”  After the ingredients become tender, the mixture is added to a special broth (made from chicken and pig bones). Special ramen noodles are cooked in a unique style, where they’re cooked together in the same pan as the mixture. The soup varies with season and it typically pork or chicken bone based. The noodles are similar to ramen noodles. It is a specialty of Nagasaki. Japanese tour groups in the area inevitably stop at a Champon restaurant. It was invented by a Nagasaki restaurant that was popular with Chinese students on a budget in the Meiji-era. It’s designed to be both economical and filling and is typically piled high with ingredients as seen below. 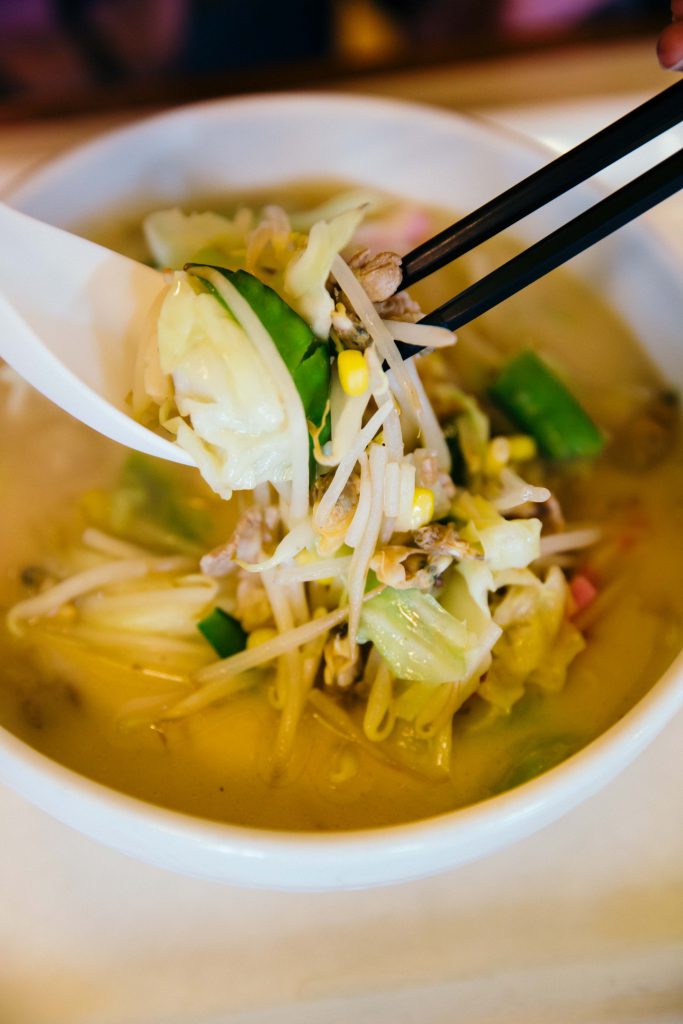 One of our first stops was a visit to Mifukan, an artisan producer of yuzu kosho and its yuzu kosho is even served on Japan Airlines first class. Yuzu kosho is like a flavour bomb and has been referred to as the silver bullet condiment. A very popular seasoning of Kyushu island, it is typically served as a dip for mizutaki, a specialty nabe of Kyushu island. It is made from chilli peppers, yuzu peel and salt which is then allowed to ferment. I really love how it imparts depth, sharpness and a heady floral fragrance to any dish. The colour of yuzu kosho is dependent on the type of chillies used and the maturity of the yuzu.

The pristine lawns at Mifukan in Saga City, Kyushu, an artisan producer of yuzu kosho. 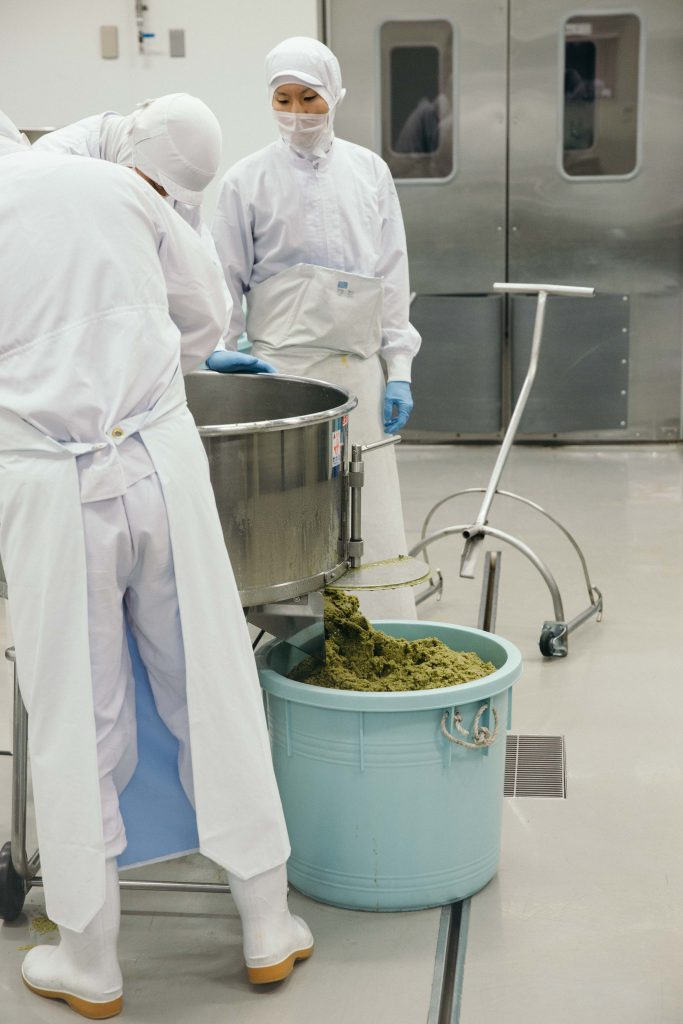 Production of yuzu kosho. This is green yuzu kosho made from green chillies and green yuzu peel (unripe yuzu) 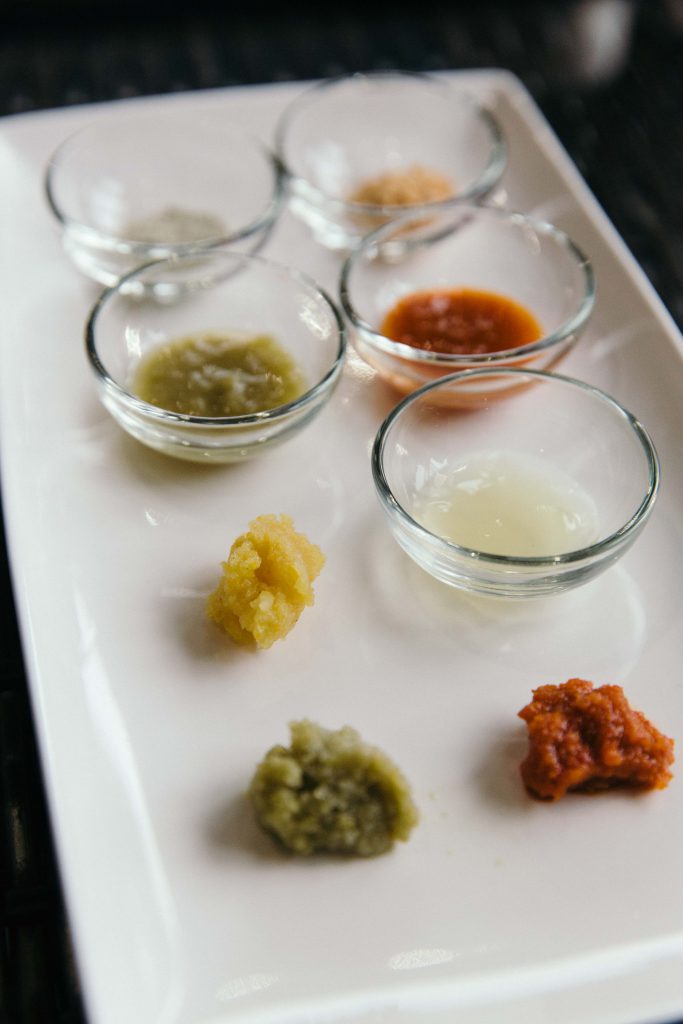 Champon is the inspiration behind our soup creation but I wanted to make it vegetarian. I have read somewhere that Japan is a vegetarian paradise wrapped in a vegetarian hell. Love of seafood is so deeply ingrained in Japanese culture and with so little arable land, fish was always in their diet. Taking inspiration from corn chowder that is widely served at popular Japanese fast food chains, we decided to “Champonised” the Corn chowder, grilling the corn husks to give it a smokey flavour, blending the corn kernels to a smooth texture and finishing the chowder off with stir-fried cabbage and corn for texture. Inspired by the clean, umami-rich flavors of yuzu kosho, we made an aioli with it to add an instant complexity and brightens our grilled champon style corn chowder. 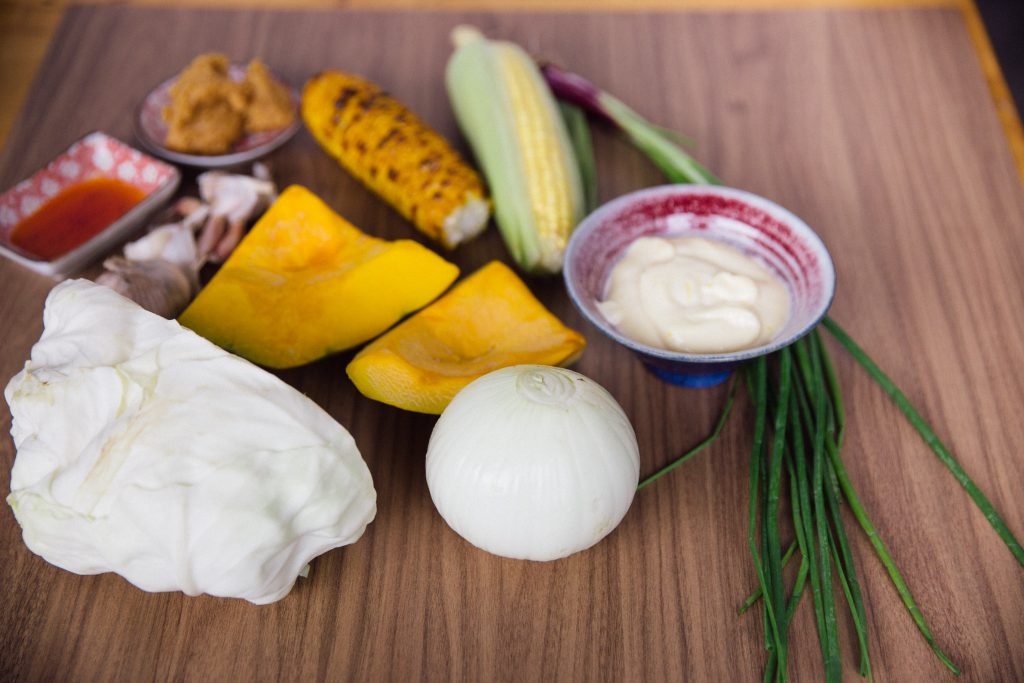