What do you get if you cross European, Chinese and Japanese cooking? In Nagasaki, the answer is Shippoku, a blend unique to the city. This is the first Japanese fusion cuisine found during the Edo period 400 years ago as a result of exchanges between the Japanese in Nagasaki, the Chinese traders and the Portuguese and Dutch traders that came through for the important sugar road route to Tokyo.

A replica of Dejima, old Dutch quarters, and the Blue Building, Japan’s oldest Protestant Seminary. For more than 200 years, Dejima acted as the only window open to overseas trade. Nagasaki was very important as a trading post for sugar during the Edo period.

Sakamotoya is a 120 year old establishment, run by 4th generation husband and wife team. Besides being a restaurant, it is also a ryokan. It serves tradtional shippoku ryori. 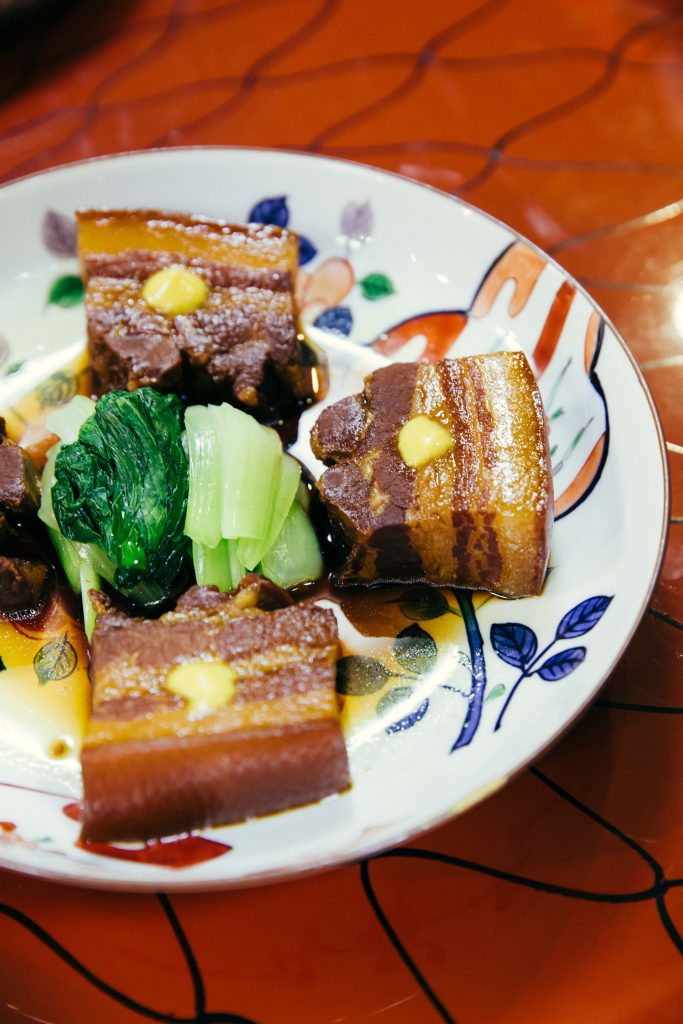 Shippoku cuisine is the first Japanese fusion cuisine, a mixture of traditional Japanese, Chinese and Western dishes from Nagasaki. As can see here, this is dongpo pork, traditionally from China. Previously, in the Edo period, Japanese do not eat any meat, and their staple had always been fish.

A very western cheese grilled lobster with cheese is one of the courses of a shippoku meal. Over the centuries, shippoku food has evolved slightly but essentially it is still fusion food. Portuguese brought sugar whilst the Dutch introduced cheese into the Japan.

Shippoku actually means table cloth signifying  the Chinese banquet style eating around a round table, in most cases, a lacquered red table with black line designs. The roots of Shippoku style cooking hark back to the period in Japanese history during which the country was shut off from the outside from 1633-1853 and the style of cooking was brought through Nagasaki which was the only Japanese port open to foreign vessels at that time. Nagasaki Shippoku style cooking came into fashion as a unique local specialty borrowing elements from Japanese, Chinese, Spanish and Portuguese cooking. It is interesting to note that the Chinese community has long standing ties with Nagasaki (its Chinatown is the oldest in Japan) and Portuguese sailors and missionaries were the first westerners to set foot on the archipelago in the middle of the sixteenth century. 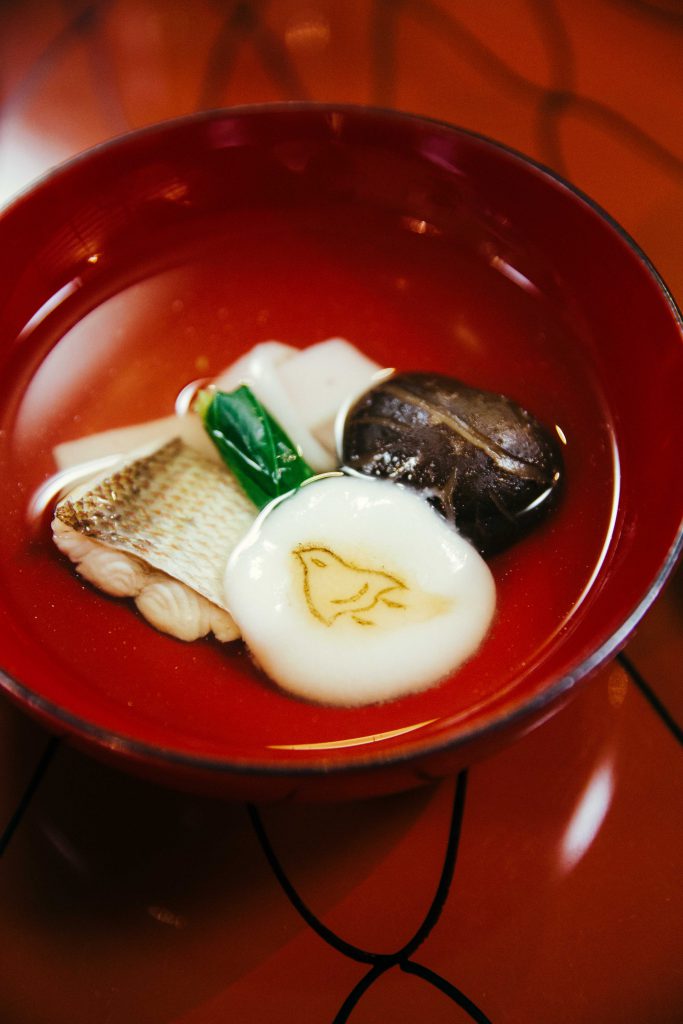 Lacquered bowls used for soup served on round red lacquered table with mesh design. Seen here, soup with mochi, fish in a bonito kombu stock is typically served as a first course in shippoku cuisine.

Hikado originated from Picado, a Portuguese vegetable soup that the Portuguese cooked in their quarters. However, it evolved to become Hikado when the local Japanese in Nagasaki adapted it to include local ingredients and added miso to it. It is served as part of the Shippoku, almost always as a soup during the cold winter months. It is however not very well known amongst the younger generation. Typically made with ago dashi kombu stock, small cubes of potatoes, carrots, zucchini and whatever vegetable is in season, konnyaku, and either chicken, fish or pork are used. We had the privilege of having this soup paired with Kaisendon at Rakushintei Heart Lounge in Nagasaki where the focus was on healthy eating. Here, the Kaisendon is made using 16 mixed grain rice instead of the typical white rice.

Our version of Hikado is inspired by the hikado we had at Nagasaki with the addition of mixed grain rice to make it a healthy and heartier affair. As shippoku is Japanese and Chinese dishes crossbred with dishes of Portuguese inspiration, I wanted our Hikado to have the Chinese influence so sea cucumber is added, an ingredient associated with Chinese banquet dinners, with a topping of ikura (salmon roe) to give it an exquisite fusion flair. 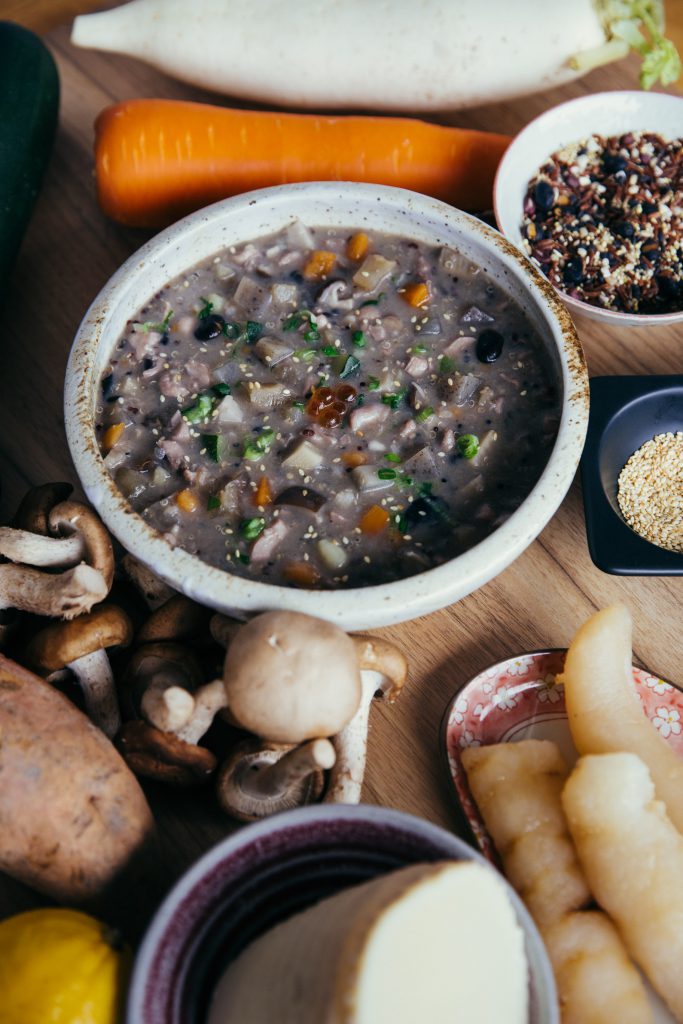 Hikado stew and its ingredients