Kimchi refers to often fermented vegetable dishes usually made with napa cabbage, Korean radish, or sometimes cucumber, commonly fermented in a brine of ginger, garlic, scallions, and chili pepper. There are endless varieties with regional variations, and it is served as a side dish or cooked into soups and rice dishes. Koreans traditionally make enough kimchi to last for the entire winter season, as fermented foods can keep for several years. These were stored in traditional Korean mud pots known as Jangdokdae. Kimchi is packed with vitamin A, thiamine B1, riboflavin B2, calcium, and iron. Its main benefit though is found in the bacteria lactobacilli; this is found in yogurt and fermented foods. This bacteria helps with digestion. South Koreans eat an average of 40 pounds of Kimchi each year.

The barramundi we are using is locally farmed in Singapore waters. The flesh of the barramundi was really firm and sweet. Great to have it steamed, and sliced thinly for a steamboat party. Clean pure taste and firm flaky texture—that’s what sets Australian barramundi from all other species of barramundi. Kühlbarra imports their fishes directly from Australia and it is bred in our clean and pristine seas. I would definitely feed barramundi to my kids, as it is packed with heart healthy and souper brain nutrients: omega-3 and omega-6 fatty acids. Another interesting fact I found out was Kühlbarra’s Australian barramundi species can rival the incredible healthy benefits of tuna ! Definitely a delightful surprise considering the price per kg of tuna !

In Korean cuisine, kimchi is not only a condiment or pickle; it is also used as an ingredient in many cooked dishes. Kimchi soup is a satisfying example. The fermented kimchi vegetables quickly provide deep flavor to the broth, so the soup can be produced in little more than half an hour. Many have enjoyed the Korean stews we created for the #TSSTakeMeToKorea campaign in 2014, especially the Kimchi Chicken Jjigae. In the same way that every family has their own secret family recipe for kimchi, the recipes for Kimchi Jigae vary widely by household. Being a big fan of kimchi and it made sense to combine my favourite locally farmed barramundi from Kühlbarra into one melting pot of awesome comfort food, that is both restorative and filling. Together with our homemade Kimchi Soup Stock specially produced for this Lunar New Year as a steamboat stock, this is THE miracle souperfood, great brain booster and keeps us looking young at the same time! 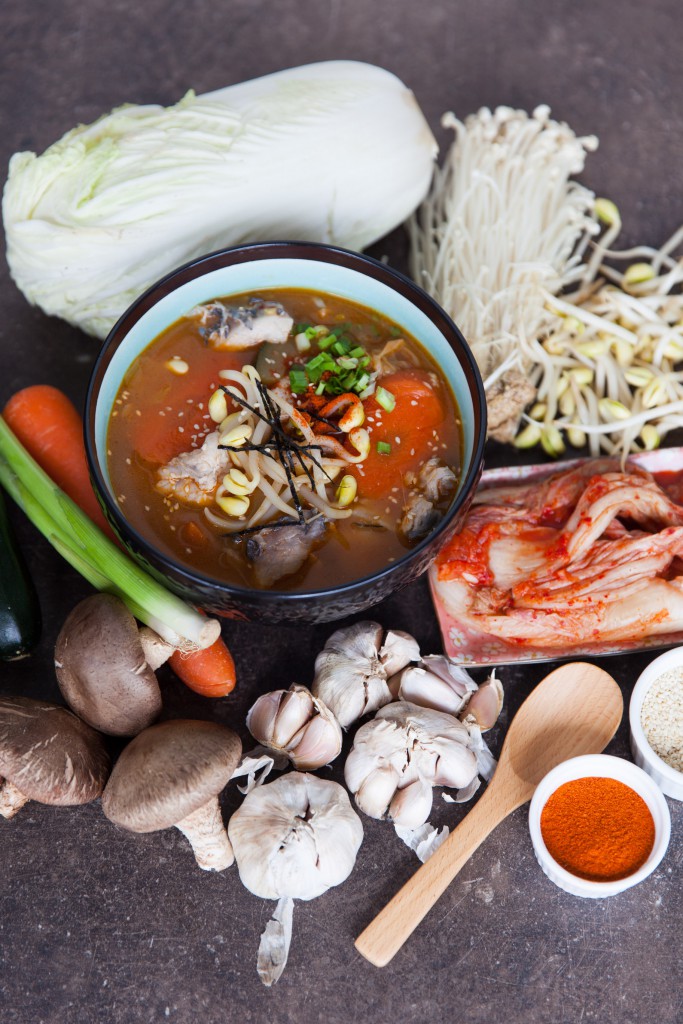