February 2014, was my first visit to Bhutan. Our very first lunch in Thimpu, the capital city of Bhutan, consists of a buffet spread at a modest restaurant, and one of the dishes that we were served was a beef broth style with cellophane noodles. It left a deep impression as it was cold outside and the slurp of the hot stew warmed us from within. It was a very good first impression. I have read some online remarks and comments that food in Bhutan is disastrous, monotonous and it was just chillies and cheese in everything they ate.

Many restaurants in Thimphu and Paro offer Indian, Chinese and Nepali food that is misunderstood as Bhutanese. There are very few authentic Bhutanese recipes  served in restaurants , and unfortunately, it has also been difficult to experience the cuisine when travelling in country. Tourism is a new industry in Bhutan. Just forty years ago, the country opened its borders to tourists. As a new industry, tourism is still tightly controlled by the state. All foreigners must be on escorted tours and some attractions are closed to outsiders completely. Even in country, whether as a tourist or an expat, it has been difficult to eat a lot of Bhutanese food beyond that cooked for you by acquaintances and friends. My husband who went with me on my  second trip in July 2015, declared Bhutanese food to be delicious and similar to foods served  in Singapore. LOL!

Silk Road and her influence

Perhaps, the most misunderstood food but Bhutanese food is not like that served in our homes here in Singapore.  To begin to understand Bhutanese cuisine it is necessary to know the basic history of the people and the importance of Bhutan in regional and in Silk Road trade. Although archaeological evidence suggests that Bhutan was inhabited at least as far back as the second millennia BCE, most modern Bhutanese trace their ancestry back to the Tibetan migrations into Bhutan in the 7th Century ACE. The Tibetans brought with them their food culture, but that culture soon began to incorporate new ingredients that they found in Bhutan’s fertile valleys and hills. This adaptation continued until Bhutanese food developed its own unique character. Of course cuisines are always evolving and Bhutan’s cuisine is changing rapidly today. On the Silk Road, Bhutan served as an important link and trade partner between Assam and Bengal in the South and Tibet in the North. The Bhutanese traded ponies, sheep, and dogs, chilies, textiles and other spices and in return received rice, betel, dried fish, and all-important rock salt from its trade partners. Other items brought into India by Arab merchants and into Tibet by the Chinese and Central Asians were also traded. So, far from being isolated, the Bhutanese were part of the Old World’s global economy brought about by the Silk Road. Thus cinnamon from Sri Lanka and cloves from Indonesia were incorporated into the litany of Bhutanese foods.

Aunt Sonam and her hospitality

From the onset, I knew I wanted to learn from the locals and understand the way they eat and cook. Our guide arranged us to visit Aunt Sonam in her farmhouse that was used partly as a guesthouse, an eco tourism initiative, that would allow tourists and guests to experience living in Bhutanese homes, enjoying the hospitality and the local Bhutanese foods. She was very kind and allowed me to help her in the kitchen, learning from her the traditional Bhutanese dishes cooked according to her family traditions. I learnt there are stir fries, curries and stews. There are salted, smoked, boiled and dried foods, and there are also dishes with flexible preparations and presentations, such as those that can either be a soup or noodles with sauce. 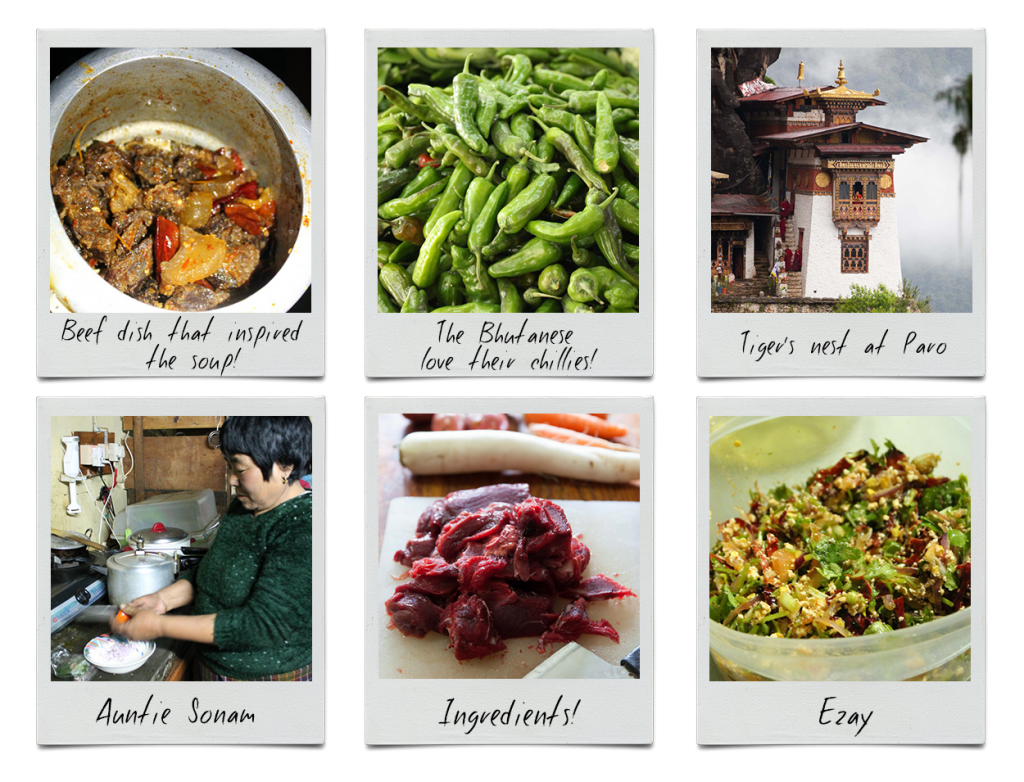 I recreated this dish with lots of garlic, ginger, leek, white radish, oyster mushrooms, tomatoes, and green chillies, cellophane noodles with thingey (Bhutanese black pepper with woodsy and lemony overtones imparting a tingly feel to the tongue). This was where I had my first taste of ezay too, essentially a chopped dried red chilli salad mixed with red onions, coriander, cheese and thingey. Serving them together brings the beef broth to whole new level for Bhutanese cuisine. 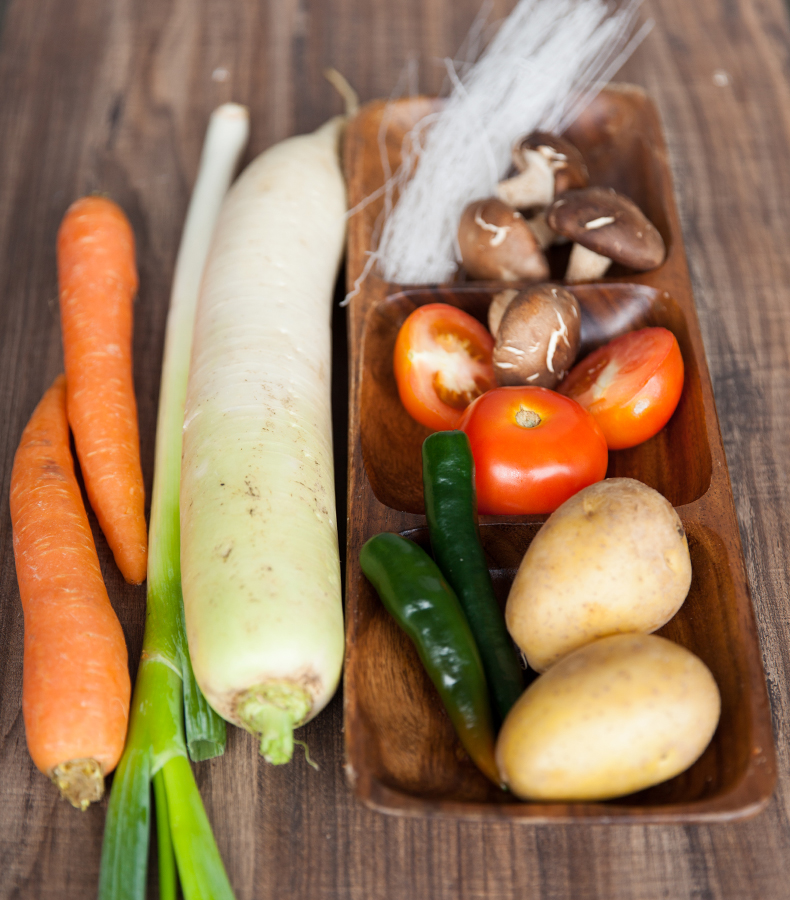 Ingredients used for Bhutanese beef with radish and mushroom curry 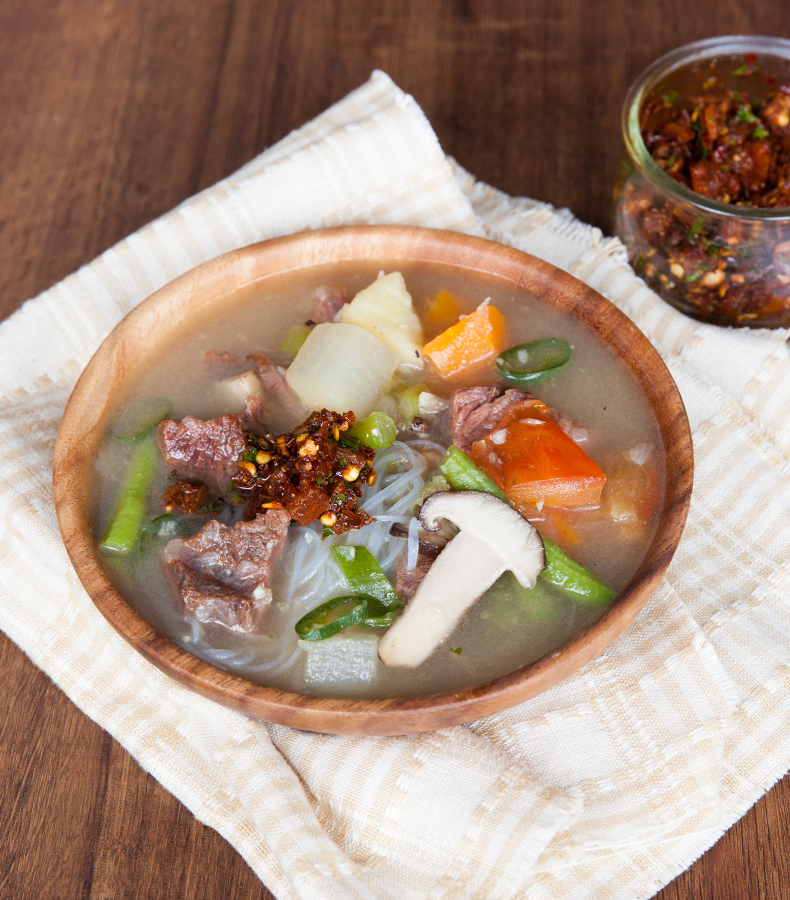