Cheese is a favourite ingredient and in fact ema datse – chillies and cheese “ema” means “chili” and “datse” means “cheese” in the Dzongkha language, is among the most famous dishes in Bhutanese cuisine and is Bhutan’s ubiquitous national dish of green or red chilies, fresh or dried, in melted cheese. On its own, datse is tangy, almost astringent tasting, but it melts nicely when heated.  This national dish has spun into numerous variations: Kewa Datse (potato and cheese) being one of them and is the inspiration behind our soup. These are typically not so spicy variations of the ema datse with the addition of vegetables.

Bumthang and her hospitality

Bhutanese hospitality is legendary and is famous all over the world and to the Bhutanese, it is the elixir of life! The Bhutanese people believe that they are highly honored when they share their meals with guests and would open up their homes. Furthermore, it is a matter of pride for a Bhutanese woman not to let guests go away unfed or unhappy from her home. The Sanskrit dictum “Atithi Devo Bhava,” meaning “the guest is truly your god,” is aptly applied in Bhutanese hospitality. It is the pleasure of the host and hostess to serve food to the guests; in fact in most festivities and celebrations, serving food is often the most important part of the occasion. Whatever the occasion may be, Bhutanese people always eat with great enthusiasm and are skilled at finding reasons to feast and have a merry time.

In Bumthang, we feel very blessed to have such opportunities to dip into Bhutanese food culture and eat in a traditional setting in the Rinchenling Lodge. We learnt to prepare and puta & khuley, the hearty buckwheat pancakes and noodles of the Bumthang region, a staple food especially at higher altitudes and particularly in the Bumthang region.  We had the opportunity to go into the buckwheat fields. In the middle of the field sat a genial farmer in his sixties, whacking hard at the buckwheat stalks with a long stick. Our guide, Ugyen spoke to the farmer on our behalf and we learned that the whacking was to ‘beat the seeds out’, after which the grain-like seeds go through a filter of sorts. The buckwheat harvests are then used as grain alternatives or milled as buckwheat flour to be made into pancakes, noodles and the likes. Now, as the buckwheat production dips into a further decline partly because of manpower shortage to beat out the seeds physically, even the husks which were typically discarded are now salvaged to be made into buckwheat husk pillows. As a rough estimate, the farmer’s buckwheat field can yield only about 20kg of seeds or about 8 kg of buckwheat flour per harvest. According to Ugyen, buckwheat used to be food for the poor, but with its decline, prices have since gone up three-fold, and now it is food mainly for the richer ones in the community, or those who still yearn for a taste of nostalgia. Our host at Rinchenling Lodge in Bumthang, Dasho Jamphed Ngedup (Dasho is a title given by His Majesty the King to people who have been recognized for their services to the country), recalled he used to eat buckwheat all day – buckwheat pancakes for breakfast, buckwheat bread for lunch and buckwheat soup for dinner. Now, given its relative rarity, buckwheat noodles are typically served only at big gatherings, for instance, formal work functions. Even though Bumthang is a buckwheat-growing valley, production is low and yields have been underwhelming.

Not far away from the buckwheat fields is the potato field. And what a buzzing field it was! We asked to help harvest the potatoes, and everyone welcomed us with bemusement. We bent down, picked up potatoes big and small, and threw them into baskets spread around the fields. Dasho shared that when he was a child, potatoes were mostly homegrown in a small kitchen patch for own consumption. In the 1970s, potato farming became large scale, and potatoes were regarded as a cash crop for sale to India. 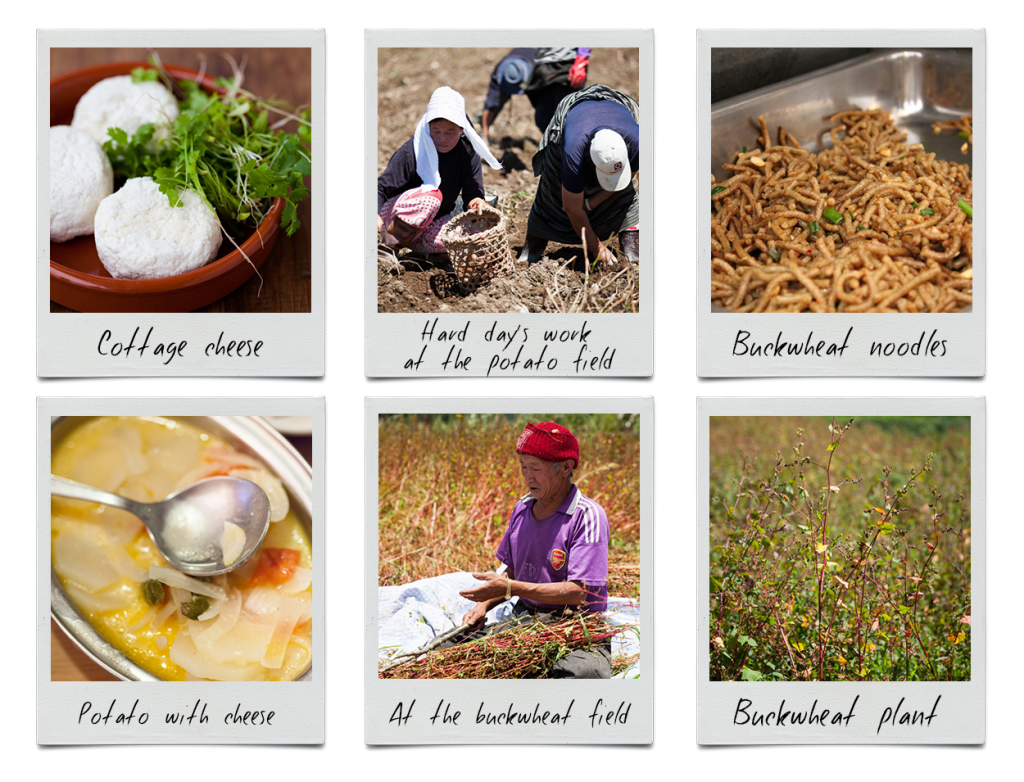 Marrying kewa datse using potatoes and cheese with buckwheat was no easy feat. I was inspired by the buckwheat noodles we had and the traditional way of making it. Hence, came the idea to make buckwheat “balls” or “cakes” like how the Koreans enjoy rice cakes in their soup and the Chinese have the “knife sliced noodles”. 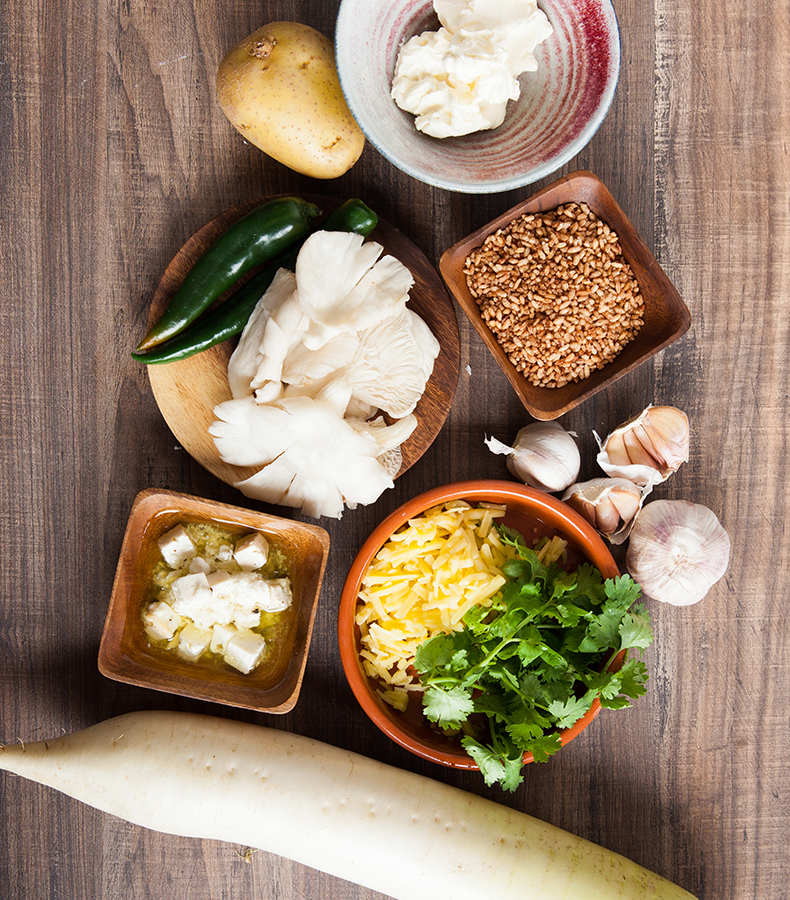 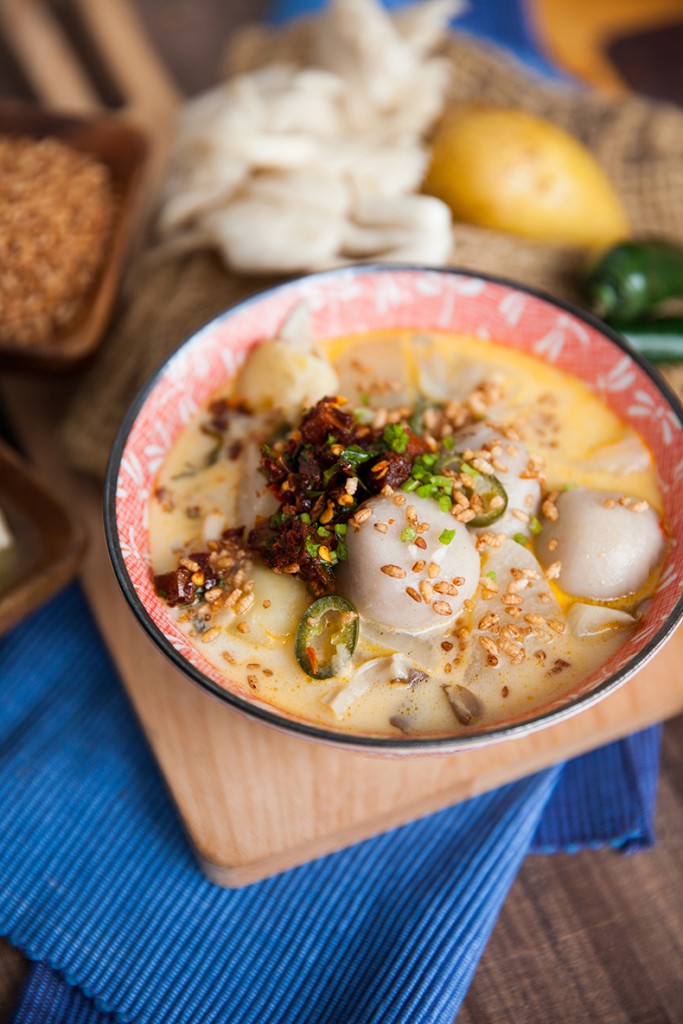