Gumbo and its origin

“The dish personifies the word ‘Creole’; like its human counterparts, gumbo was born in the New World and took cues from the old but adapted to the new.” Cynthia Lejeune Nobles.

Indeed, these quotes pretty much sums up gumbo. Of all the dishes in the realm of Louisiana cooking, gumbo is the most famous and, very likely, the most popular. Gumbo crosses all class barriers, appearing on the tables of the poor as well as the rich. Although ingredients might vary greatly from one cook to the next, and from one part of the state to another, a steaming bowl of fragrant gumbo is one of life’s cherished pleasures, as emblematic of Louisiana as chili is of Texas. According to my research, since the 19th century, gumbo has often been served at social gatherings or other special occasions in Louisiana. Local fais do-do (dance parties) usually provided gumbo beginning at midnight.  Many families “have a gumbo”, or host a casual social gathering where friends and family chat and enjoy alcoholic beverages and gumbo. It is a central feature of many local festivals. The self-described “Gumbo Capital of the World”, Bridge City, Louisiana, holds an annual Gumbo Festival featuring gumbo cooked in a cast-iron pot 3 ft  deep and 5 feet in diameter.

In rural Acadiana in southern Louisiana, gumbo is a central feature of Mardi Gras celebrations. On Mardi Gras, local men wander from house to house and beg for gumbo ingredients in an event known as courir de Mardi Gras. Members of the local community would then gather in a central location while the men cook the gumbo. When it is ready, the group eats and dances until midnight, when Lent begins.

According to some, the gumbo is a reinterpretation of traditional African cooking. West Africans used the vegetable okra (lady fingers) as a base for many dishes, including soups, often pairing okra with meat and shrimp, with salt and pepper as seasonings. In Louisiana, the dish was modified to include ingredients introduced by other cultural groups. Surviving records indicate that by 1764 African slaves in New Orleans mixed cooked okra with rice to make a meal.  It consists primarily of a strongly-flavored stock, meat or shellfish, a thickener, and the Cajun holy trinity of vegetables, namely celery, bell peppers, and onions. Gumbo is often categorized by the type of thickener used, the vegetable okra, the Choctaw spice filé powder (dried and ground sassafras leaves), or roux, the French base made of flour and fat. The dish likely derived its name from either a word from a Bantu language for okra (ki ngombo) or the Choctaw word for filé (kombo).

Our version and my inspiration

Chicken gumbo was one of the first few stews I experimented with during the initial phase of The Soup Spoon years ago. I followed this recipe that called for whole chicken chopped to pieces and marinated with spices, coated with flour, then deep-fried before cooking it in a peppery stew with peppers, onions and chillies. My husband always commented that it tasted like a popular fast food chain of chicken in a spicy stew, very yummy but a tad unhealthy. Fast forward ten years, while having lunch at Bubba Gump (after the movie Forrest Gump) in New York, I had the opportunity to try their gumbo and it rekindled fond memories. Hence I have decided to cook my healthier clean-eating version, sans the deep frying in the original recipe. Inspired by the New Orleans culture, this stick-to-the-rib goodness has marinated chicken, potatoes, carrots, okra and celery cooked in a spice-perfumed broth and thickened with gluten-free dark roux. 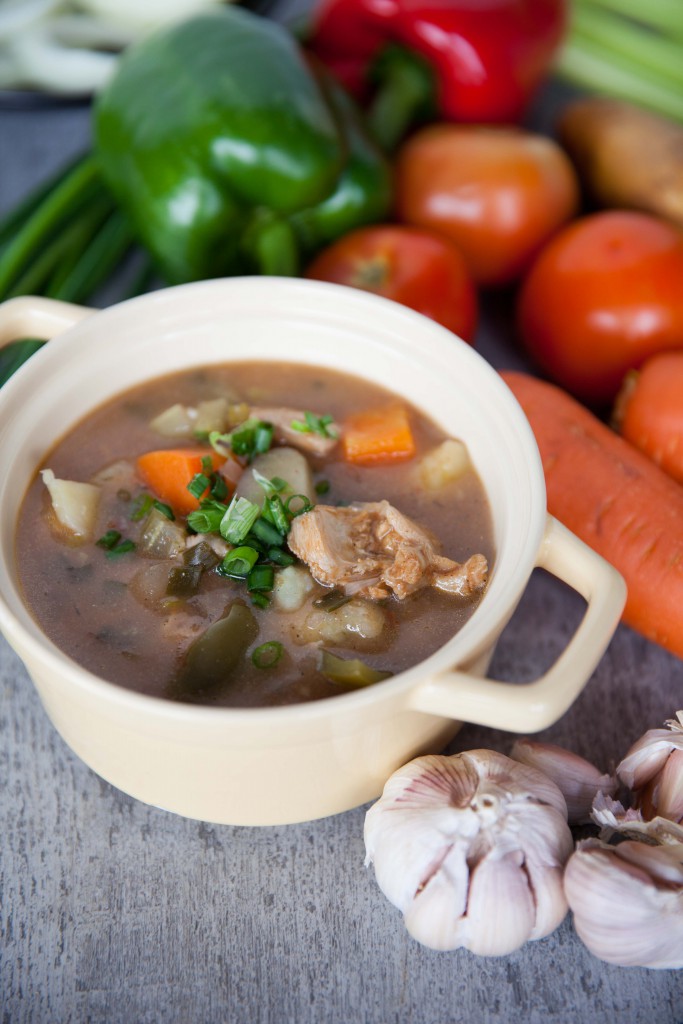 Chicken gumbo and ingredients used for its cooking