We were fortunate to have hosts arranged for us throughout our travel in Brazil, so communication was never an issue. But even if you are travelling on your own, food is really a common language that everyone speaks. Vendors are eager to share and introduce the produce and in most markets, particularly the ones in Recife, there are explanatory signages
in Portuguese and English. As tourists, this is a very welcoming gesture! With its renowned fame as the Venice of Brazil and the Amsterdam of South America, Recife stands out as a major tourist attraction in the north-east region of Brazil, mainly for its beaches and for its historic sites. It is in Recife that you can immerse in Brazil’s colourful past that has developed its unique identity today as one of the most racially mixed societies. A 10 min drive away, we arrived in Olinda, a city that spreads over a series of hills near the isthmus formed by the Beberibe River.

A quick search on Wikipedia, it is said that the name of the first capital of the state of Pernambuco came about when Duarte Coelho set foot in what is now Olinda and exclaimed: “Oh, what a beautiful place (O linda situação) to build a town.”  It was here that the the seat of the state captaincy was founded, which quickly flourished thanks to the growing of sugarcane. In 1630 the Dutch invaded Pernambuco and conquered Olinda. But, unlike the Portuguese, they did not like a city of steep, narrow streets as their capital. So they put it to the torch and Recife became the ideal capital city. Fortunately Olinda – like Rome and many other cities around the world, is built on seven hills – survived and was reborn even more beautiful than before. So much so that, since 1982, it has been a World Heritage Site. The multi-coloured houses going up and down the hills, the lush gardens overlooking the sea and over twenty Baroque churches, monasteries and chapels contribute to the timeless charm of the city which has inspired a multitude of artists and artisans. On the streets of the higher part of the city there are woodcarvers’, potters’ and painters’ studios behind every door. 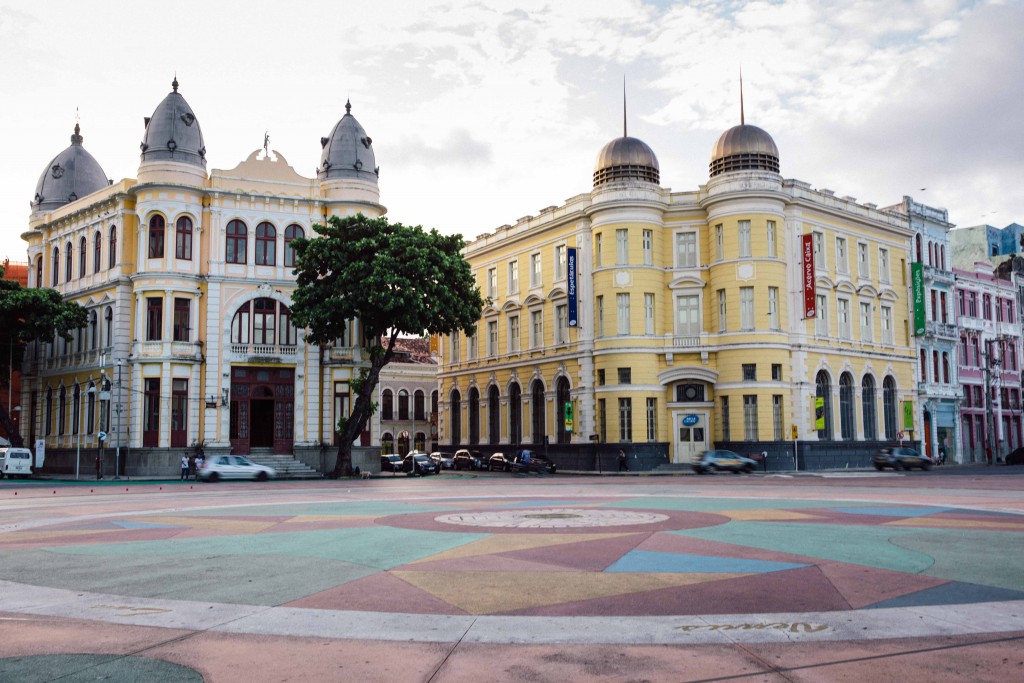 The colourful buildings in Recife, a testimonial of its colonial past

Recife/Olinda cuisine is the cuisine of its region, Pernambuco, and the culinary influences of the area can be traced to a dynamic assortment of cultures: The Dutch, Spanish, Moors, Africans and Indians. Many dishes come with a delicious coconut sauce, and feature corn, mandioc, fresh seafood, and native fruits. Grilled meats are also big here, especially goat and beef dishes. The typical regional main dishes include feijoada Pernambucana (made with brown beans instead of black), sarapatel, rabada (oxtail stew with manioc flour), cozido Pernambucano (beef stew), chambaril( pic below), galinha de cabidela (chicken in blood sauce),  feijão com arroz (rice and beans) and Carne-de-sol (Sun-dried beef), which consists of beef dried in the sun and usually served with green beans. For dessert, it has bolo de rolo (cake roll), cake Souza Leão, cartola (top hat cake) which consists of fried bananas with cheese topped with cinnamon and sugar. 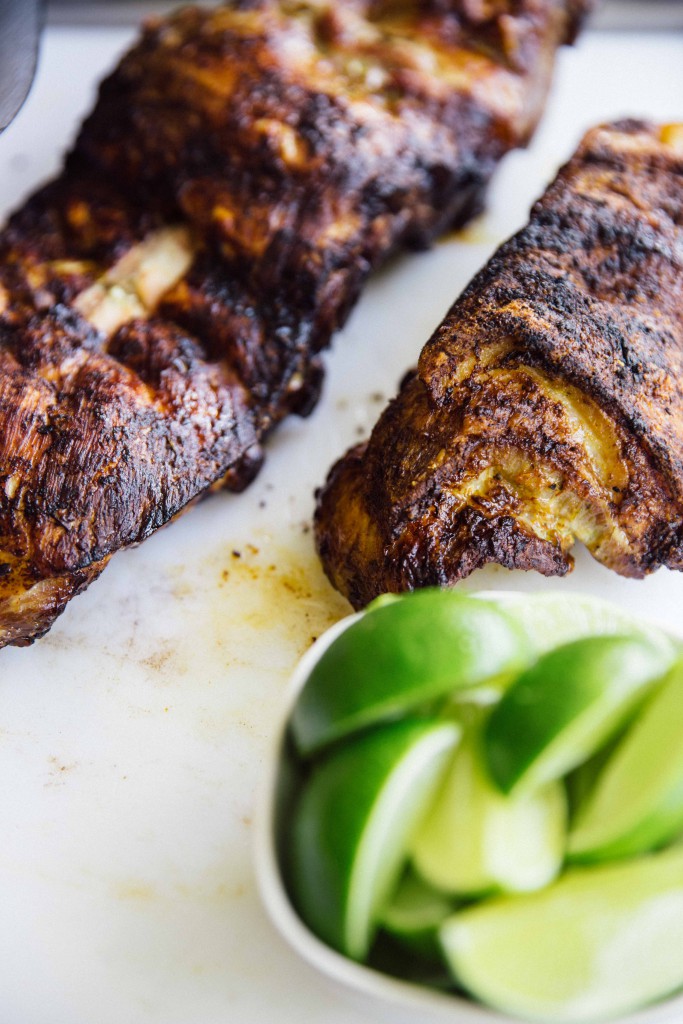 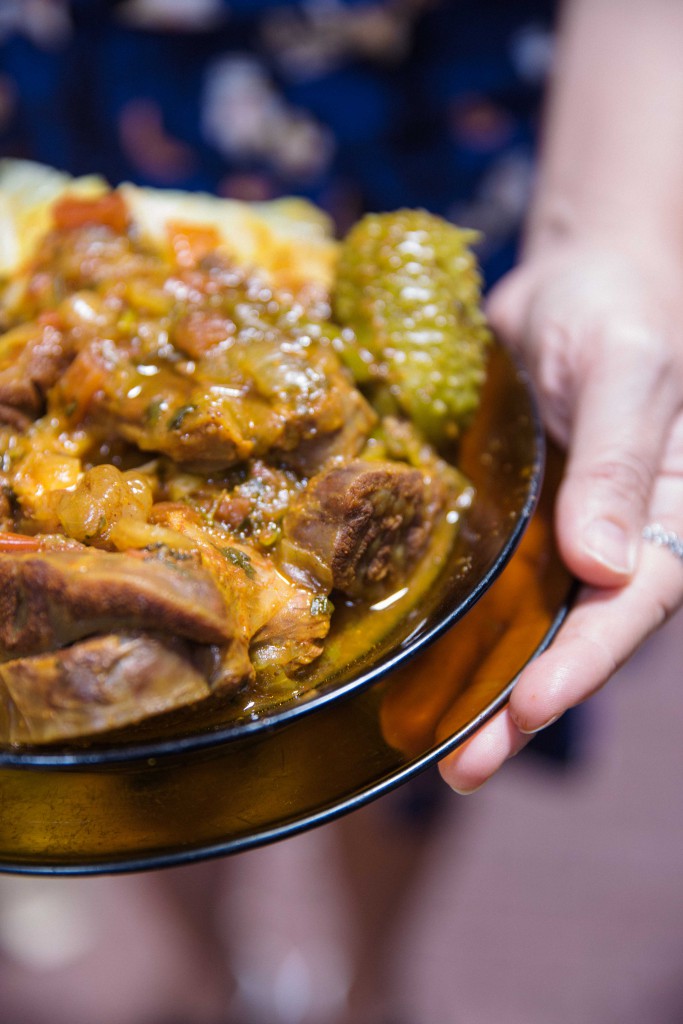 Chambaril, an oxtail stew with carrots, gherkins and cabbage 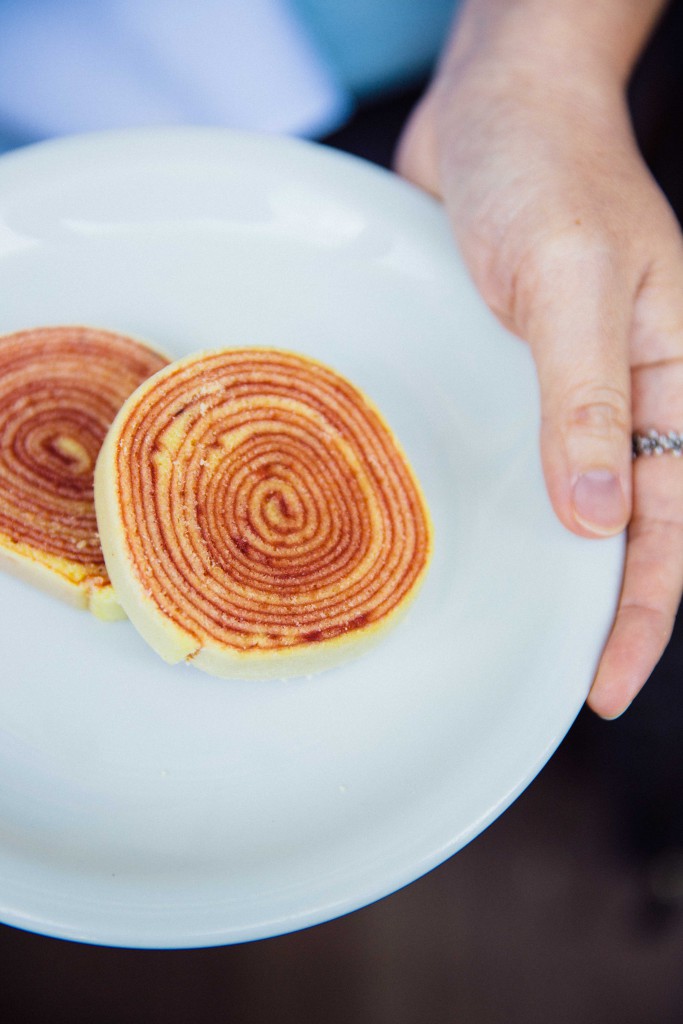 Guava roll cake (Bolo de Rolo) is a typical Brazilian delicacy from Pernambuco, a beautiful State in the Northeast Coast of Brazil.
It is an artisan cake made of very thin layers of a buttery batter rolled into thin layers of guava paste.
Tourists never leave Pernambuco without taking some Bolo de Rolo home as a souvenir and it is part of the fun the search for the place that sells the most authentic cake, the thinnest layered cake, the one with the highest number of layers, local’s favourite and so on.
The cake is served in fine slices, which balances well the sweetness of a single portion.

Along Olinda’s many quiet cobblestoned streets, lies Oficina do Sabor, a quaint restaurant with a small backyard garden space. It is the brainchild of chef and cookbook author César Santos. This cozy restaurant is decorated with local art and colourful table cloth hand painted by local artist, with a stunning view of both Recife and Olinda. Here, Pernambucan cuisine is the real star. The huge menu includes the addictive Northeast specialty of jerimum known as Jerimum recheado com lagostim ao creme de manga. This dish is a hollowed out, baked pumpkin shell stuffed with lobster in a creamy mango sauce, topped with cream cheese and served with a curry rice. I never expected pumpkin and mango to ever go so well together. The flavors of the dishes here were quite spot on, very well balanced, flavorful and not heavy. I loved how the fruity, savory and the tang all came together beautifully with the richness of the prawn stock. This dish was both decadent and traditional at the same time. 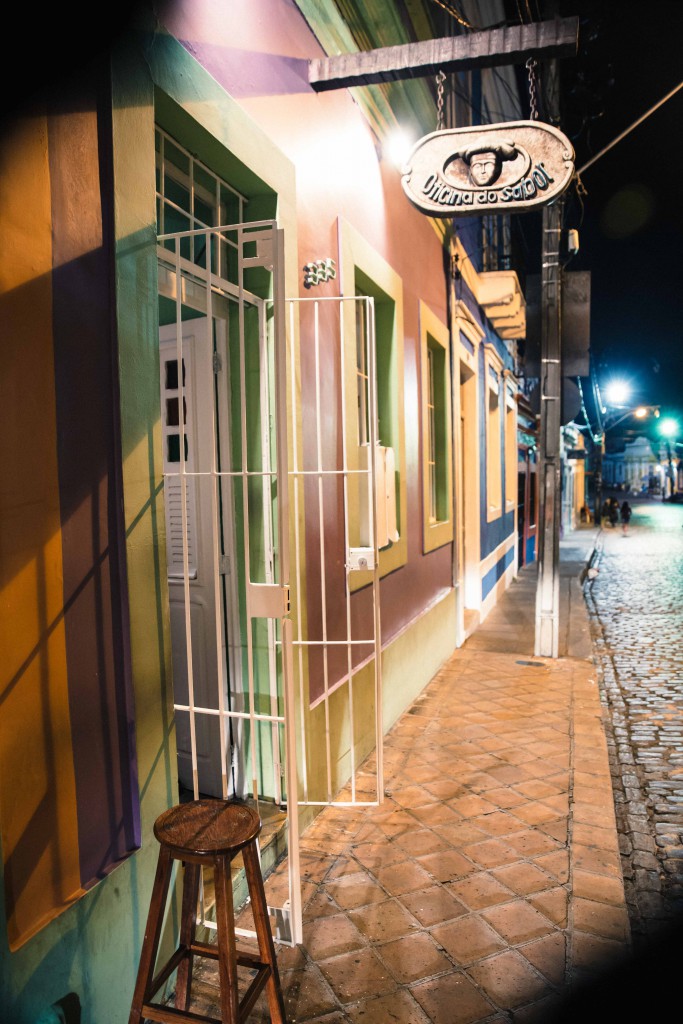 The restaurant Oficina do Sabor situated along the cobblestone road. The residential architecture, which brings together the Portuguese and Brazilian heritage of the city, includes 17th-century dwellings decorated with mashrabiyas, and 18th-century houses covered in tiles, as well as more recent homes. The brightly painted houses create colourful streetscapes. 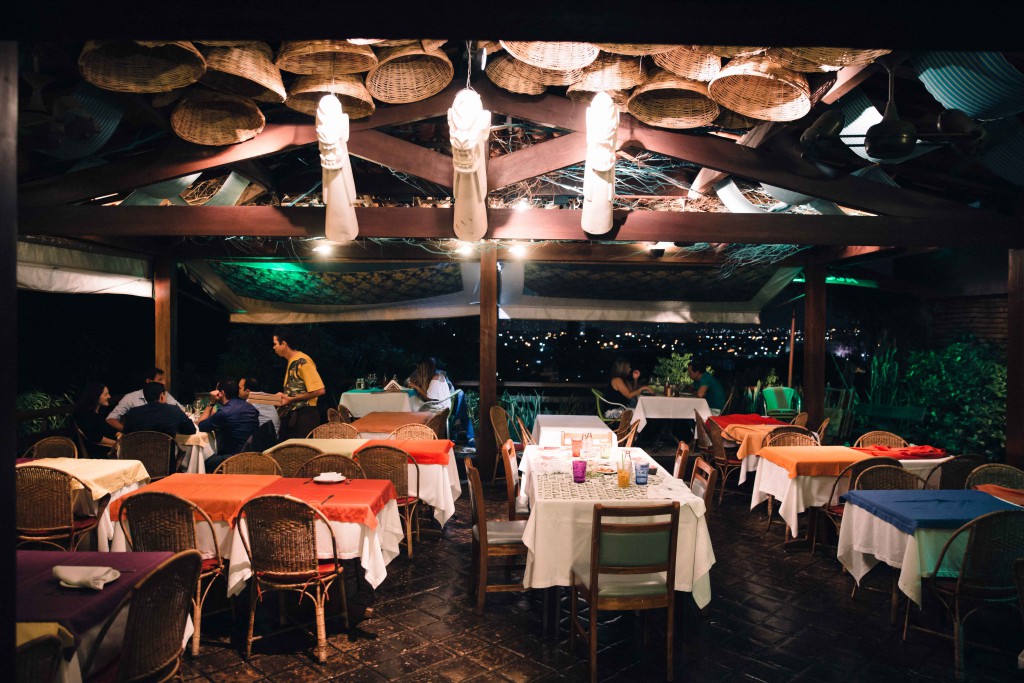 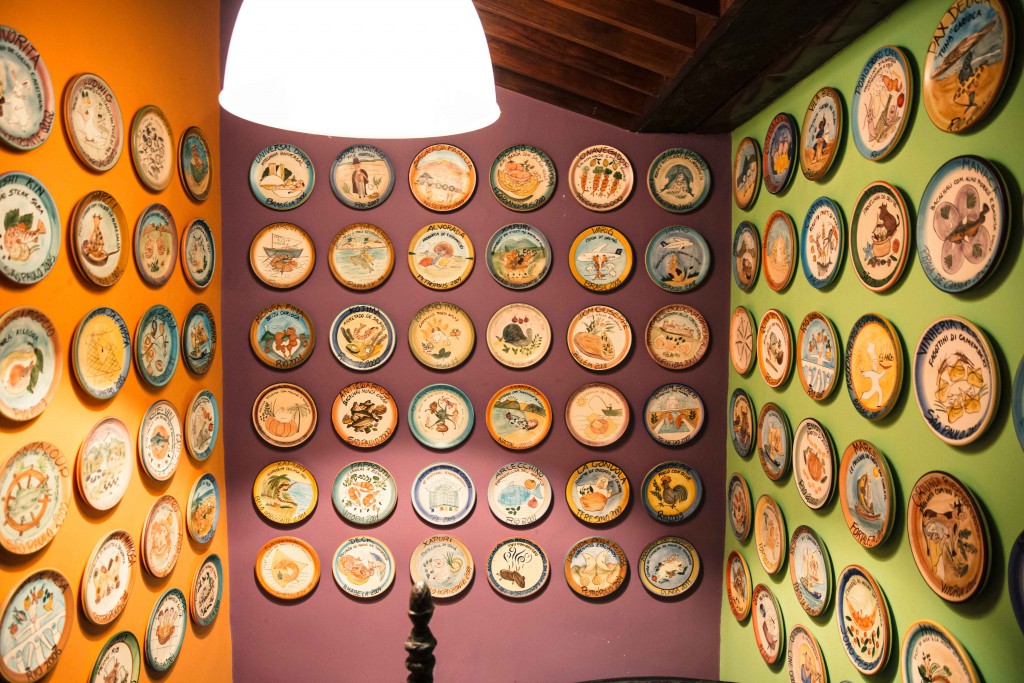 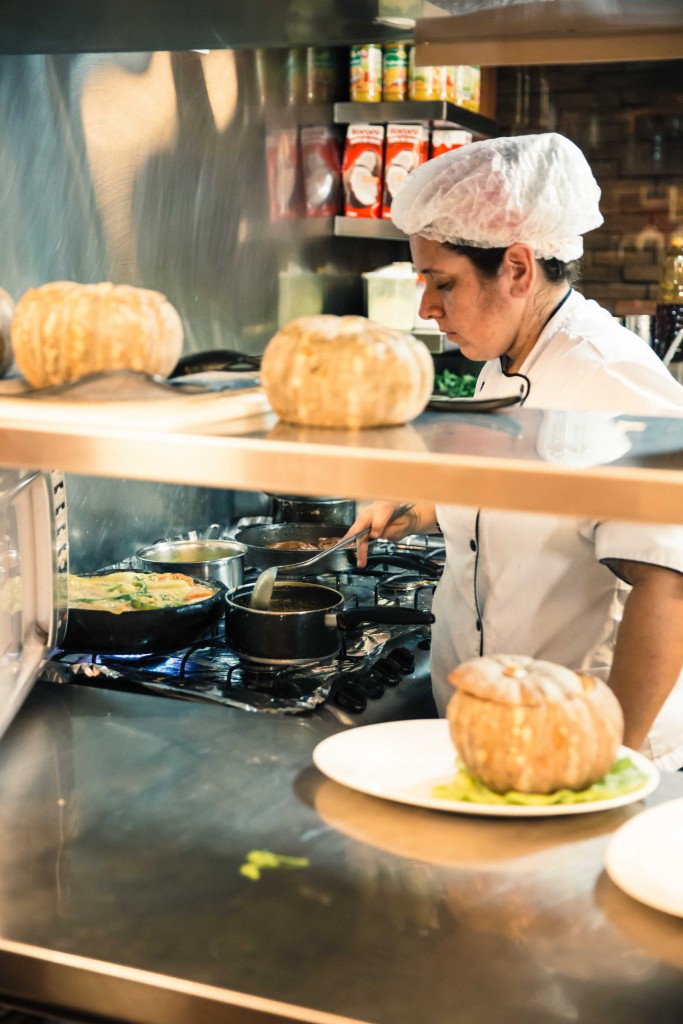 The most popular dish here, Jerimum, a hollowed out pumpkin baked with different fillings 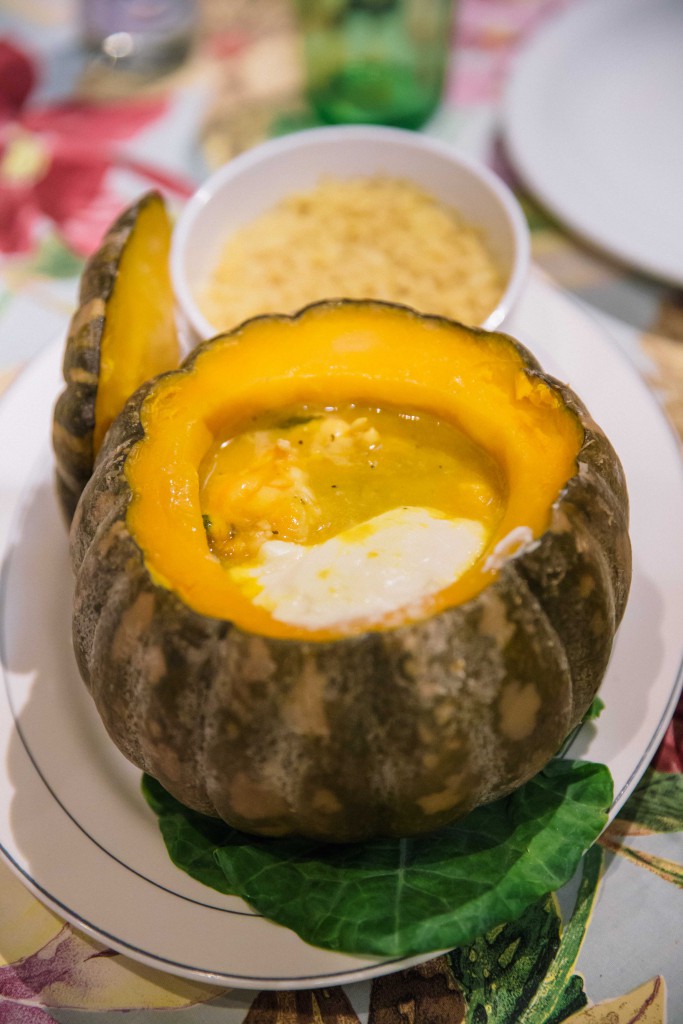 The original inspiration was to mix seafood with fruit. This might seem obvious in a coastal town in a country blessed with tropical produce, but it was not part of either the heavy seafood traditions brought over from abroad: Portugal with its “bacalhau” (codfish) dishes nor the West Africa with its “dendê” (palm oil) stews. Santos came up with his first original dish: shrimp in mango crème sauce served in a carved out pumpkin.

Although Brazil is generally hot, when it comes to comfort foods, they have inherited a love for soups and stews.  The moment I tried this, it was WOW, and why had I not thought about it first, marrying seafood with fruits! The individual flavors of the pumpkin, mango, and curry compliment each other to produce a memorable soup. I knew if there was one soup I wanted to showcase Pernambuco, it has to be inspired from this soup. Like bees and honey, pumpkins and coconuts are great friends. This Brazilian partnership is traditionally seen in sweets and pastries. Mango adds a tropical flavour that elevates the pumpkin. Taking pumpkin, mango and adding it to a traditional French style prawn bisque with fennel, cream cheese and a hint of curry, we hope to recreate this dish for you to enjoy. Added a generous amount of quinoa to make it one hearty bitsque.

Thank you Diego for bringing us here. We loved the food, the conversations we had on ancestry which does not seem very well defined and really it does not matter. There is a saying that whatever happens through the history of a country, much happens at the table regardless of the colonisation and cultural differences. This strong sense of assimilation that took place amongst the Portuguese, native Indians and Africans helped craft the formation of the Brazilian culture today. 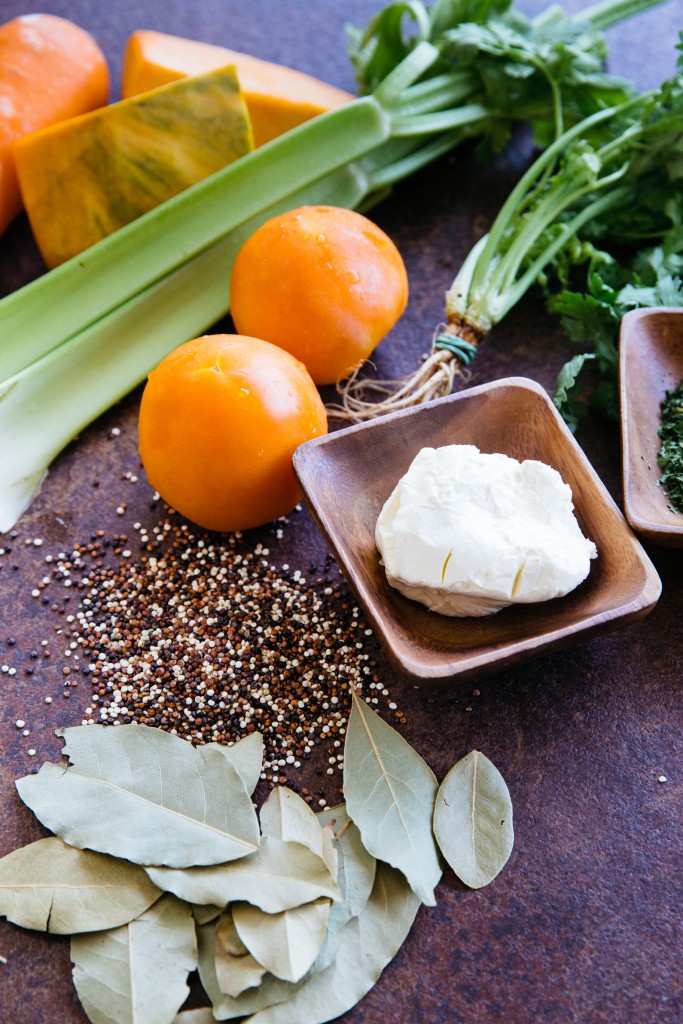 Ingredients used for curried pumpkin with mango and prawn bitsque 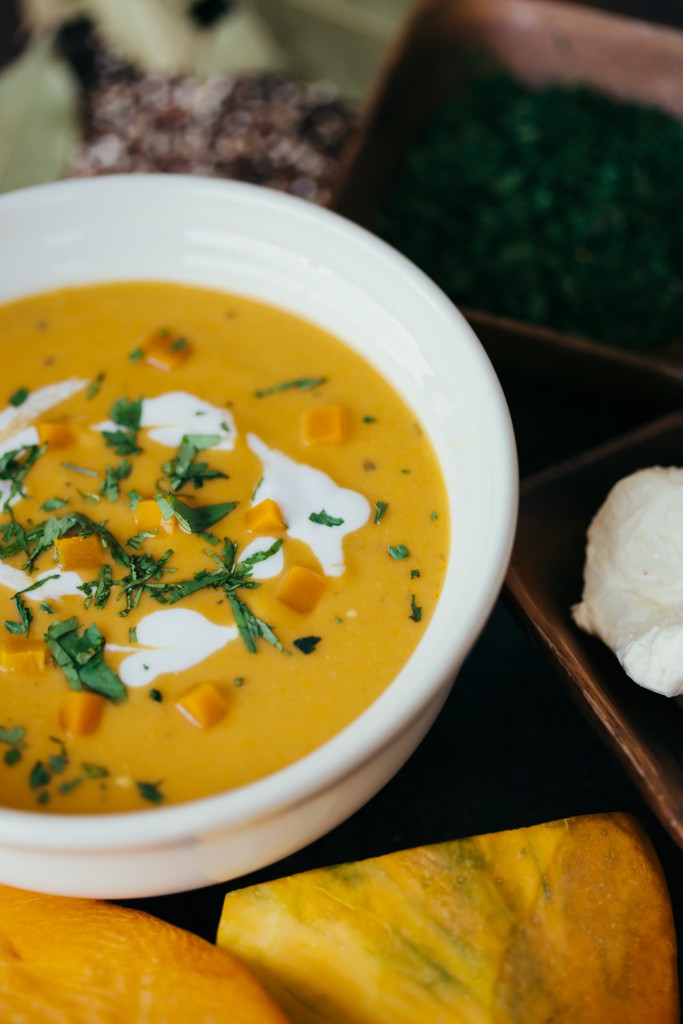 Condiments: a drizzle of coconut cream and chopped coriander.