Nobody doesn’t like Julia Child, and I’m no exception after watching the movie Julie & Julia. Her recipes taught a generation of Americans about French food, and her approach instilled the confidence to cook it. Julia Child is absolutely one of my idols . If you’ve seen the movie Julie & Julia, you know that I am not the only one that feels like Julia Child recipes are some of the best and that they are souper fun to make.

French onion soup (French: Soupe à l’oignon ) is a type of soup usually based on meat stock and onions, and often served gratinéed with croutons and cheese on top. Although ancient in origin, the dish underwent a resurgence of popularity in the 1960s in the United States due to a greater interest in French cuisine. French onion soup is usually served as a starter. Onion soups have been popular at least as far back as Roman times. Throughout history, they were seen as food for poor people, as onions were plentiful and easy to grow. The modern version of this soup originates in France in the 18th century,typically made from beef broth, and caramelized onions. It is often finished by being placed under a grill in a ramekin with croutons and comte melted on top.

Here, at The Soup Spoon, we have made ours vegetarian, and not using the typical beef stock as a base stock. Ours is inspired by Julia Child’s technique and hence it can be an arduous affair toiling over the onions and ensuring we have an intensely flavoured rich liquid base using a mirepoix of celery, carrots and herbs to create an intensely oniony sweet flavour with amazing depth despite being vegetarian.

Making french onion soup, requires a lot of onions and peeling each and every one of them, triggers me to sing “Cry me a river”. I have tried wearing goggles but the sulphuric compounds still reduced me to tears. I truly dread making this soup in our early days. Patience is also needed to simmer this soup to bring out the sweet & natural flavour of onions. The onion rings are first caramelized till brown and sweet. It is then cooked overnight in a home-made vegetable stock, red wine and fresh herbs to allow the onion flavor to permeate the broth and for the flavors to meld. The result, a rich vegetarian broth base intensely flavored by a plethora of seriously cooked onions so soft they melt in your mouths. Topped with sour dough croutons and finished with a mixture of mozzarella and cheddar and parmesan cheese. Previously we have used gruyere cheese but in order for this soup to be fully vegetarian, gruyere cannot be used as it contains animal rennet. It is still as good and irresistible, I promise. 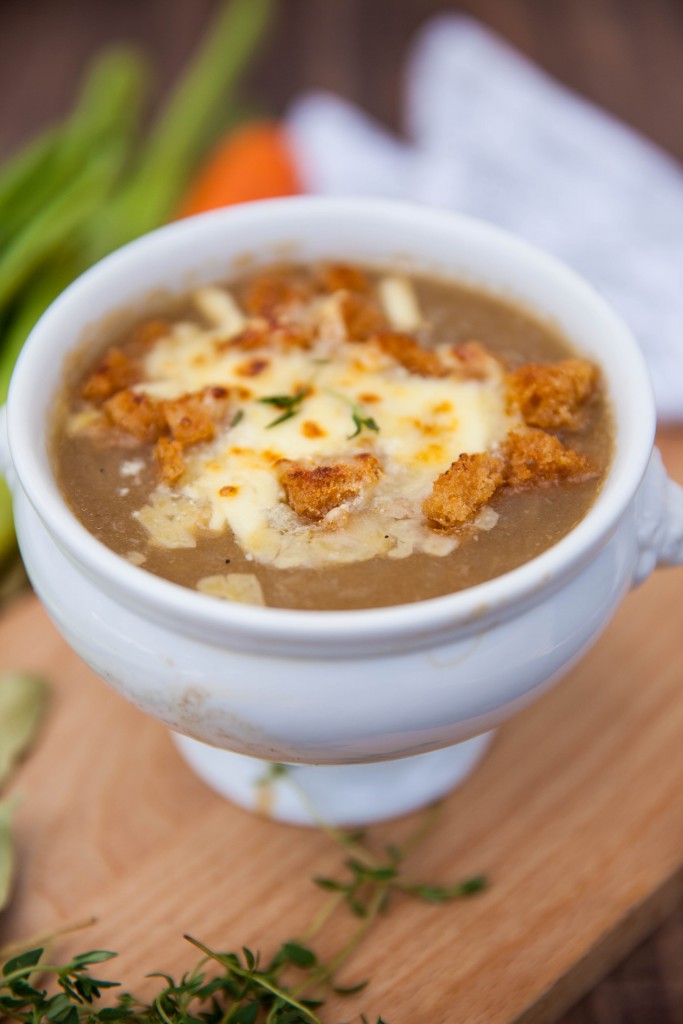 *Once condiments added, soup will contain gluten and dairy