French Ratatouille and its origin

A really good ratatouille is not one of the quicker dishes to make, as each element is cooked separately before it is arranged in the casserole to partake of a brief communal simmer,” Julia Child writes in her preface to her 1961 Mastering the Art of French Cooking recipe.

Ratatouille is a traditional French Provençal stewed vegetable dish, originating in Nice, in the South of France. Its name comes from two French verbs, tatouiller and ratouiller, both coming from the verb touiller which means to stir up. Because this is what one does when one makes ratatouille: stir the vegetables. Though referred to commonly as ratatouille niçoise, ratatouille is popular among the entire Mediterranean coast as an easy summer dish. It is typically prepared as a stew with each vegetable being sautéed separately before being layered into a baking dish and baked. It is usually served as a side dish, but may also be served as a meal on its own. It is also commonly used as a filling for savory crêpes or to fill an omelette.

Tomatoes are a key ingredient, with garlic, onions, zucchini, eggplant, bell peppers, marjoram, fennel and basil, or bay leaf and thyme, or a mix of green herbs like herbes de Provence. There is much debate on how to make a traditional ratatouille. The original ratatouille recipe had the vegetables fried before baking. Since at least 1976, some French chefs have prepared the ratatouille vegetables in thin slices instead of the traditional rough-cut. One method is simply to sauté all of the vegetables together. Some cooks, including Julia Child, insist on a layering approach, where the eggplant and the zucchini are sautéed separately, while the tomatoes, onion, garlic and bell peppers are made into a sauce. The ratatouille is then layered in a casserole – eggplant, zucchini, tomato/pepper mixture – then baked in an oven. A third method, favored by Joël Robuchon, is similar to the previous; however, the ingredients are not baked in an oven but rather recombined in a large pot and simmered.

Yes, the vegetable stew made famous by the movie “Ratatouille”. When I first made this stew two years before the movie was released, the name was hard to pronounce and we had to put its pronounciation next to the name for our staff and customers. But after the movie, it became unnecessary as everyone pronounced it perfectly! The power of a successful movie. My version is different from that of the movie. The one in the movie was derived from the confit byaldi. American chef Thomas Keller popularized a contemporary variation, confit byaldi, for the movie. He served as food consultant to the Pixar film Ratatouille, allowing its producer, Brad Lewis, to intern for two days in the kitchen of his restaurant, The French Laundry. Lewis asked Keller how he would cook ratatouille if the most famous food critic in the world were to visit his restaurant. Keller decided he would make the ratatouille in confit byaldi form, and fan the vegetable rounds accordion-style with a palette knife. He first wrote about a dish he called “byaldi” in his 1999 cookbook, The French Laundry Cookbook.  In his version, Keller added two sauces, a tomato and peppers sauce at the bottom (pipérade), and a vinaigrette at the top.

I very much preferred to have the ingredients all simmered in a large pot till it is all thick with a wide array of colourful vegetables and truly a feast for the eyes. Potatoes, carrots, french beans, eggplant, cauliflower, zucchini and fresh peas married with plump, juicy tomatoes stewed to tender perfection, and seasoned with fresh herbs. Lavish yet nutritious! 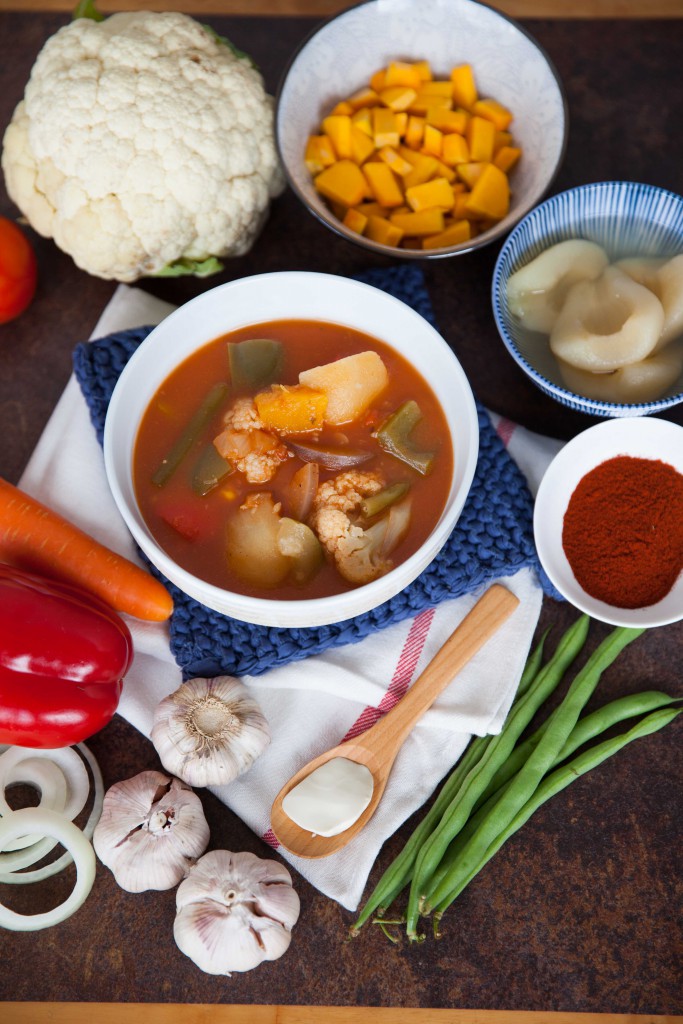