Reliving food memories from my childhood is like taking carousel rides in the amusement park – heartwarming, fuzzy, and never quite enough. Growing up, I’ve always been surrounded by good food. I used to think every adult is a great cook, because everyone around me shows such respect for ingredients and seems to always bring magic to the table! My grandfather is one legendary cook. As you can tell from the name of this Souper Inspirations soup, this one-pot stew is an heirloom recipe inspired by my beloved grandfather!

Grandpa came from a privileged background in Hainan Island. But the good years were short. The family’s big ships capsized one night and they had to come to South East Asia to seek a new livelihood. From riches to rags, it wasn’t the best of times for my family. Grandpa started afresh and found a job as a cook for a British family, which turned out to be a great blessing for the family! This was when he picked up techniques of Western cooking and infused it into his own style of Hainanese food. Years later, my family started a coffeeshop and restaurant, with my grandfather at the helm. Ironically and funnily, despite his celebrated ‘chef’ status in the hometown, he was better known as ‘Mahjong King’!

I learned to cook this stew from my mother, who inherited my grandfather’s gift in extracting the best flavours from the most basic of ingredients. The whole family used to clean the beef tripe together! Not my favourite of jobs, that’s for sure! In this melting pot of traditions, potatoes and carrots are married with white radish, bamboo shoots, wood ear fungus, shiitake mushrooms and leeks, then cooked slowly in beef broth perfumed with star anise, ginger and tangerine peel. We’ve left out the beef tripe in my version for health reasons.

Cooking this in my very own kitchen brings me on that nostalgic culinary ride. It’s the flavour of my childhood, the essence of my heritage. I’m proud to serve this memory on my table, and now yours. 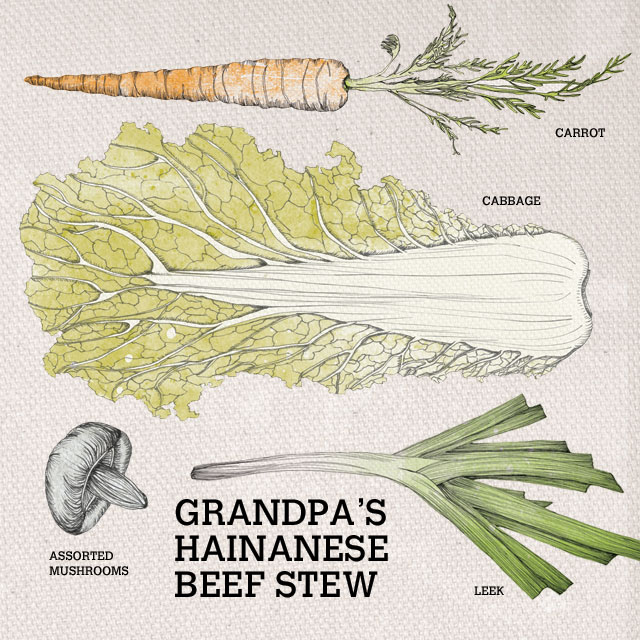 An illustration of ingredients used in Grandpa’s Hainanese Beef Stew