Where is the pot of gold? At the end of the rainbow and with the help of some shamrock! Saint Patrick’s Day, or the Feast of Saint Patrick  is a cultural and religious celebration held on 17 March, the traditional death date of Saint Patrick (c. AD 385–461), the foremost patron saint of Ireland. The day commemorates Saint Patrick and the arrival of Christianity in Ireland. It is intended for spiritual renewal and offering of prayers for missionaries worldwide. One reason St. Patrick’s Day might have become so popular is that it takes place just a few days before the first green of spring. Celebrations generally involve public parades and festivals, céilithe, and the wearing of green attire or shamrocks. Christians also attend church services and the Lenten restrictions on eating and drinking alcohol are lifted for the day, which has encouraged and propagated the holiday’s tradition of alcohol consumption.

An Irish stew is usually made with lamb. Stewing is an ancient method of slow cooking tough or cheap cut of meats. Traditional Irish stews  also known in Gaelic as ballymaloe were traditionally made with the cheapest and most readily-available ingredients using mutton (less tender sheep over two years of age) or lamb meat (neckbones or shanks) and root vegetables such as potatoes and onions with water. Irish stew makes more of a clear broth. The original staple for Irish stew was potatoes. Beef was available, but only affordable to British landowners. So most families would use lamb meat or mutton rather than sacrifice their only dairy cow. The addition of the neck bones or shanks also provided more flavoring to the stew. Each region of Ireland will also have their different version of stew. Southern Ireland will add barley which is an affordable and nutritious filler. Other regions may cap their stew with a crust of mashed potatoes making more of a shepherd’s pie. It is however not clear when stout beer was added to the stew as a meat tenderizer, fortifier, and flavor enhancer. Perhaps it was the ingenuity of an Irish pub owner?

To celebrate this vibrant Irish festival is a soup very close to the Irish hearts – the Irish beef stew with stout and more stout. I could not think of any better-known national dish than this to represent the Irish Pride. We make this every year in March, as a nod to St Patrick’s day and all things Irish. It is one of our most popular beef stews, maybe there is a touch of luck here, or we Singaporeans love our booze! In the old day,  poor Irish workers and farmers lived for their pint of stout beer and considered it part of their diet. A pint of stout was known as “liquid food”.  Almost every pub you visit in Ireland will offer Beef and Stout Stew on the menu. Stewing the beef in stout beer tenderizes the beef and adds a robust, malty flavor to the stew.  My husband, who is a lover of beer especially loved the flavors and heartiness of this stew. This hearty stew consists of vegetables, chunks of tender beef cubes marinated in stout, and mushrooms that are slowly braised in a bold sauce of stout and seasoned with herbs. The strong flavor of the stout beer pairs well with beef.  When stout beer cooks down, in particular, it adds a nice roasted caramel and chocolatey flavor to the stew. This delicious stew fills the air with a tempting aroma that is sure to whet your appetite! 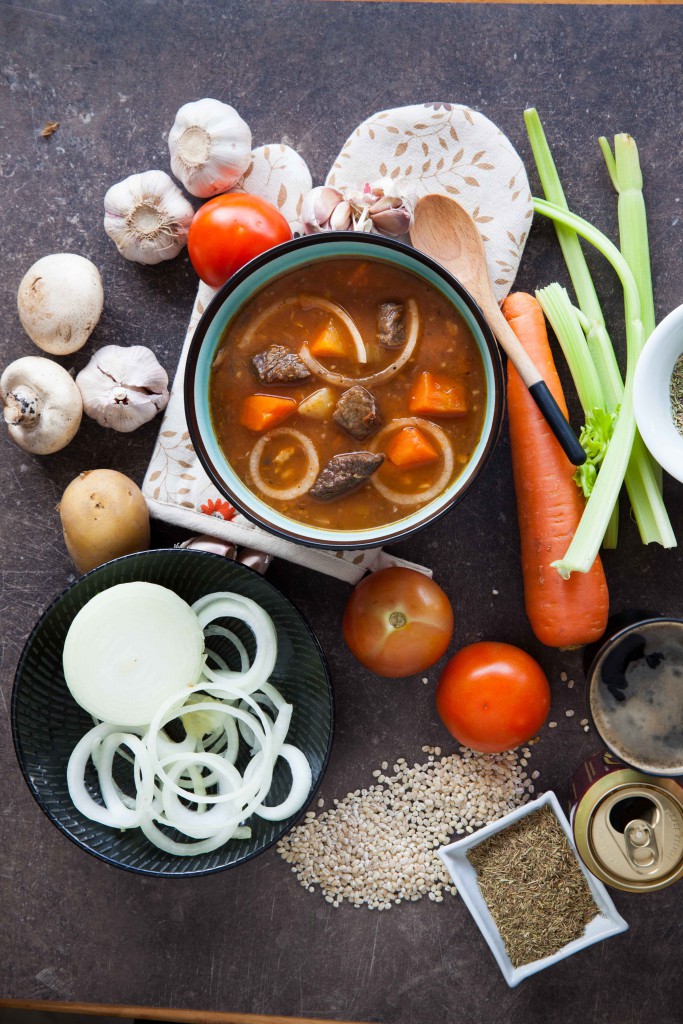 Irish beef stew with stout and its ingredients