Karaimo (“potatoes from China”; “Kara” refers to China, “Imo” is the Japanese word for potatoes) or satsumaimo is Japanese for sweet potato. Hah, the understated vegetable that has been tagged as poor man’s food in Asia. Well, no one would have guessed that this root vegetable with such humble beginnings, is rated as the most nutritious of all vegetables when it was evaluated in the States, scoring a whopping 582 points, with carrot coming in at far 434 for the USRDI(Recommended Daily Intake) measuring 6 nutrients (Vit A and C, folate, iron, copper and calcium) plus fibre. This means that sweet potatoes are excellent for your digestion. They are composed mainly of starch, which is very easy to break down and is soothing for the stomach and intestines too. This makes them an ideal healing choice for those suffering from the pain and inflammation associated with stomach ulcers and irritable bowel syndrome. The roughage of sweet potatoes even prevents constipation. And best of all, it is virtually fat free.

When we visited Kagoshima and Festivalo Karaimo World, I was greatly fascinated with sweet potato and made a mental note to self that this would have to be an ingredient that I would love to use. Listening to Hiroharu san from Festivalo explained the different types of sweet potatoes planted and their uses (from making desserts to imo shochu), I realised how versatile sweet potato is. There are over a hundred species in Japan, but the most popular edible ones (not the ones exclusively used for making shochu) have red skins and light yellow flesh. They have interesting names like Bennyhyeto, orange fleshed ones from South America, Bennyharuka, the sweetest of them all. Historically, Riemon Maeda, a sailor from Yamagawa in Ibusuki City, brought back sweet potatoes to Kagoshima from the Ryukyu Islands in 1705, after which sweet potatoes rapidly spread throughout Japan. Kagoshima also boasts a chain of active and dormant volcanoes, including the great Sakurajima, which towers out of the Kagoshima bay opposite Kagoshima city. Sakurajima means cherry blossom island but perhaps nothing so cheery when it is one of the most active volcanoes in Japan, with its last devastating was a century ago and of later in 2013, it ejected its highest recorded plume of ash. But this volcanic soil from Sakurajima is also very suitable for the cultivation of sweet potatoes and today it produces 80% of Japan’s sweet potatoes.

Comfort food is different for all of us. For some, it’s a big bowl of noodles, for others, it’s ice cream with chocolate sauce. During my travels, I have quizzed Junk0-san, the lead host and the director for our trip, on what is comfort food for her and what would she make at home when she is feeling under the weather. I was really surprised to hear curry! She would make curry with lots of garam masala as this would help clear the sinuses and warms the body. Apparently, Japanese curry is a dish that all Japanese would eat at least once a week and it is a staple of most Japanese homes enjoyed by people of all ages. There are usually made out of convenient boxed curry mixes that take the form of brick like chocolate bars loaded with saturated fats, MSG and preservatives. It was a simple cooked comforting meal that would see many students on a budget through their University years especially during cold winter days. It is really interesting to note how curry which is ground Indian spices took on a different form, taste and texture when it came to Japan via the British Navy.  The prevailing theory is that the British introduced it as a cheap way of feeding troops and that these soldiers brought their newly acquired taste for this un-Japanese blend of pungent spices home with them. It has evolved to be thicker and sweeter than most other curries of the world and has a depth of flavor that’s unique, thanks to an ample dose of caramelized onions. Typically it contains big chunks of tender meat either chicken or beef, carrots, and potatoes, it’s more like a hearty stew than a typical curry.  The Imperial Japanese Navy even adopted curry from the Royal Navy, and now the Japan Maritime Self-Defense Force’s Friday menu is curry. 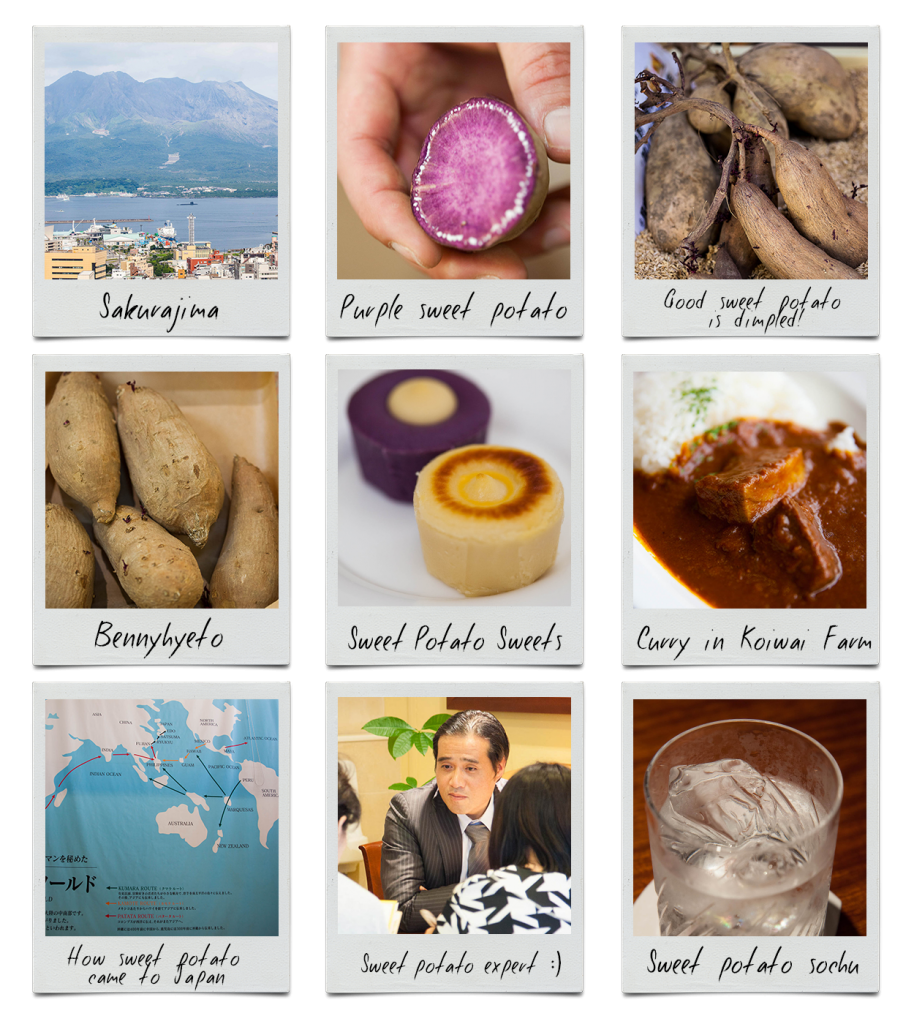 Ever since I got back from Japan, I have been working on perfecting this favourite comforting dish using paleo friendly sweet potato chunks combining it with made from scratch curry roux paste,  roasted red apples and adding barley to make it a simple, comforting yet delicious dish representing the best of Kagoshima in a vegan manner. It is thick and creamy, fruity, sweet and spicy at the same time. Adding a little coconut cream adds a touch of richness and tames the warming spice. 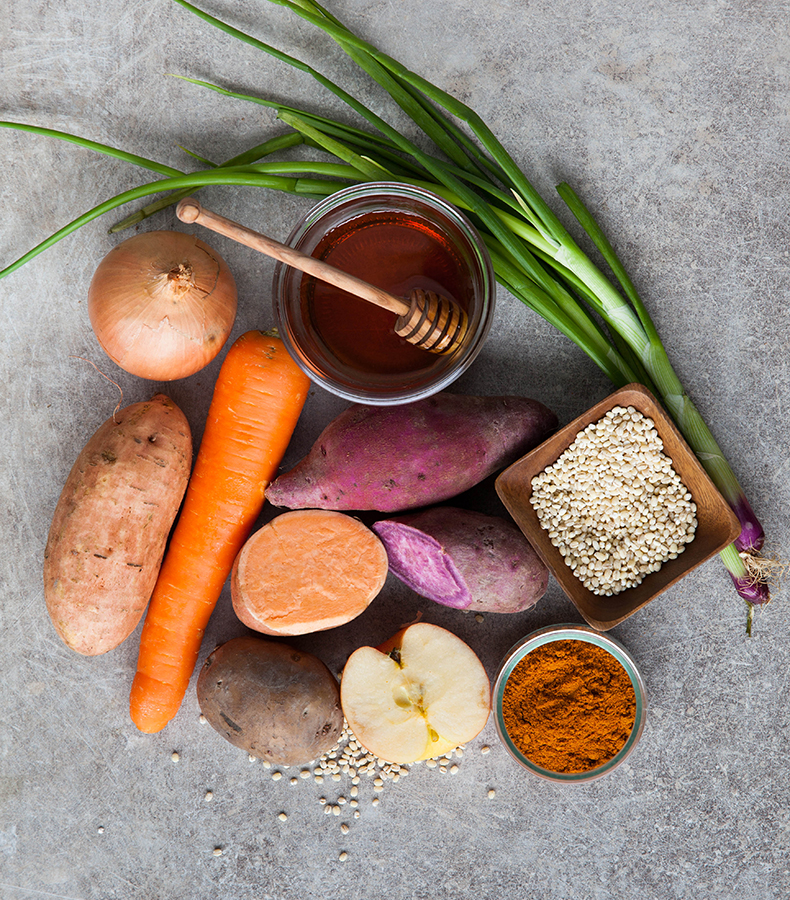 A vegan version of Japanese curry made with two different types of sweet potato, barley and roasted apples. 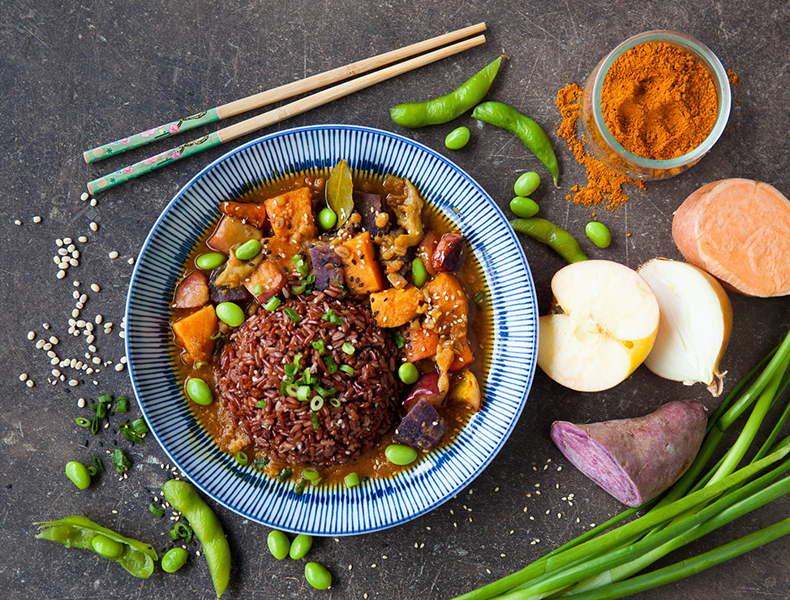 I hope I would do Kagoshima proud! My inspiration from SouperchefannatravelsxJapan combining the best of sweet potato with curry, a comfort food for all Japanese.