In 2005, Ruth Reichl (then editor of Gourmet) was quoted as saying that the Himalayan Kingdom of Bhutan had, “the world’s worst cuisine”. Reichl’s proclamation is born of ignorance of the full depth and breadth of Bhutan’s cuisine. As a kingdom sandwiched between the Asian giants of India and China, it is not surprising that its cuisine is heavily influenced by both its neighbours and created a mash up cuisine, a cuisine severely misunderstood and not easily experienced, but definitely not the worst! There are very few authentic Bhutanese recipes found online and unfortunately, it has also been difficult to experience the cuisine when travelling in the country with most restaurants serving watered down versions to suit tourists’ tastebuds.

This is definitely an influence from their neighbouring India. But the Bhutanese version is slightly different. While the Indian version is usually packed full of spices making it really flavourful and concentrated, the Bhutanese version is much milder with mainly only the lentils taste, and with a more watery texture. In fact, it probably could be eaten as porridge. The contrast between the Indian and Bhutanese version a reflection of their cultures? India, with its caste system, politics and large size makes for a more dynamic, maybe even vibrant culture, all noisy and bustling and in your face, look at me kind of India. But Bhutan on the other hand is sparsely populated, peaceful, sometimes understated, always serene. The version we had at the farmhouse was a thin slurry topped with freshly chopped dill from the garden.

We had the privilege of making thupka, one of my all time favorite breakfast dishes when we were in Punakha. It’s a warm, nutty tasting porridge, made of broken red rice cooked in water or broth until it is soft and runny, almost like a Chinese congee. At the guesthouse at Punakha, it was jazzed up with shredded ginger, matsutake mushrooms, fresh green peas and crushed thingey, a variety of the fizzy, numbing Sichuan peppercorn that grows wild in Bhutan.

Those days in Bumthang after this field trip, I lingered over each buckwheat pancake we had with much thanks. The humble buckwheat has seen grander times, but its farm-to-table story is one that stirred my heart most. Once a widely-grown and prevalent traditional crop, buckwheat has been gradually abandoned by farmers for other cash crops such as rice and potatoes that provide higher yields with less effort. In Bumthang, where most of the buckwheat still grows, we were souper blessed to be able to join a farmer in his harvest of buckwheat. That morning, the sun rose high and showered the russet buckwheat fields with a deeper glow. The buckwheat harvests are then used as grain alternatives or milled as buckwheat flour to be made into pancakes, noodles and the likes. As a rough estimate,a buckwheat field can yield only about 20kg of seeds or about 8 kg of buckwheat flour per harvest. According to Ugyen, our guide, buckwheat used to be food for the poor, but with its decline, prices have since gone up three-fold, and now it is food mainly for the richer ones in the community, or those who still yearn for a taste of nostalgia. Our host at Rinchenling Lodge in Bumthang, Dasho Jamphed Ngedup (Dasho is a title given by His Majesty the King to people who have been recognized for their services to the country), recalled he used to eat buckwheat all day – buckwheat pancakes for breakfast, buckwheat bread for lunch and buckwheat soup for dinner. Now, given its relative rarity, buckwheat noodles are typically served only at big gatherings, for instance, formal work functions. Even though Bumthang is a buckwheat-growing valley, production is low and yields have been underwhelming.

We are not done with chilli yet! At Ugyen’s brother’s home, I learned some authentic Bhutanese cuisine in their rustic and well-equipped home. This was where I learned how to make the Bhutanese multi-use fiery hot chilli condiment, ezay. Unlike Singapore’s sambal chilli and Spain’s salsa that are served with specific dishes, the ezay is a condiment that comes with almost everything. I’ve seen the Bhutanese eat it with vegetables, poultry, fried noodles, and even on top of ema datse. Chilli with chilli – the Bhutanese truly like things spicy! My first taste of ezay numbed my tongue with a hot so fiery I had to stop eating. But it was so good, so good I went on for more. Ezay is traditionally made with thingey, a locally-grown peppercorn known to the rest of the world as Szechuan peppercorn. The backing heat of the peppercorn and the red chillies makes this condiment a perfect one to have in winter, but also possibly a shock to palettes that aren’t used to the level of spice the Bhutanese love. 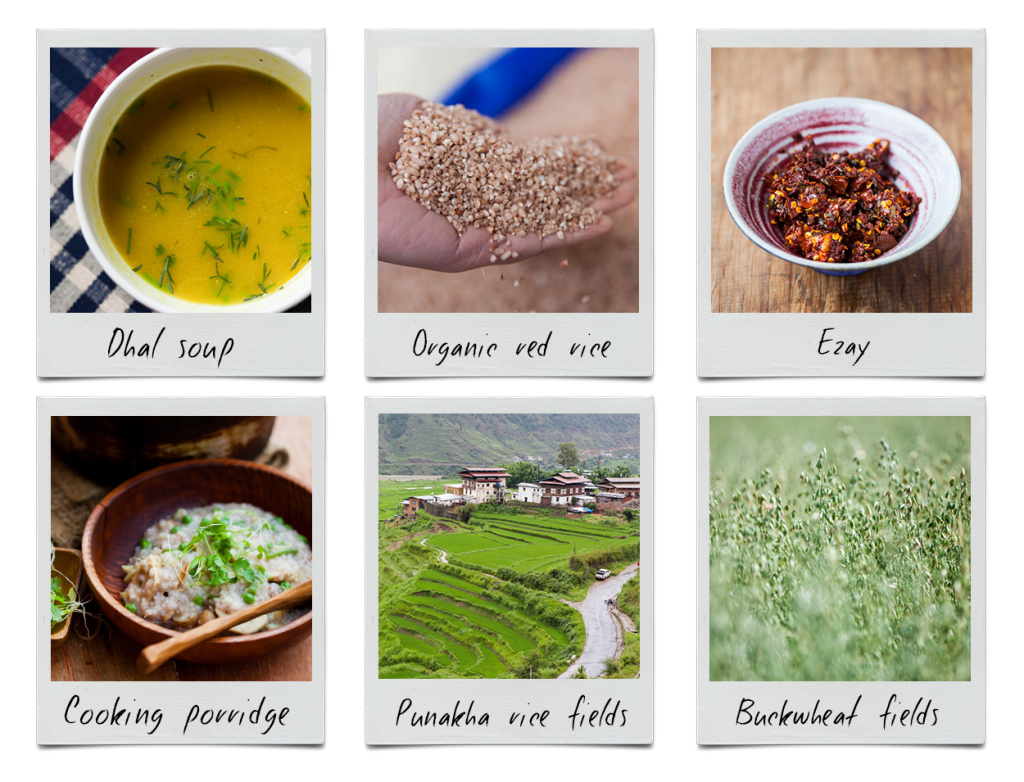 Souperinspiration mood board for mixed grain dhal with chicken

Inspired by the elements (as above) we had in Bhutan, we made a dhal-thukpa mash up  soup mixing yellow lentils, bhutanese red rice, buckwheat groats with chicken, dill, coriander and ginger to create something yummy reminiscent of the dhal and the porridge frequently eaten for comfort and warmth in Bhutanese homes. 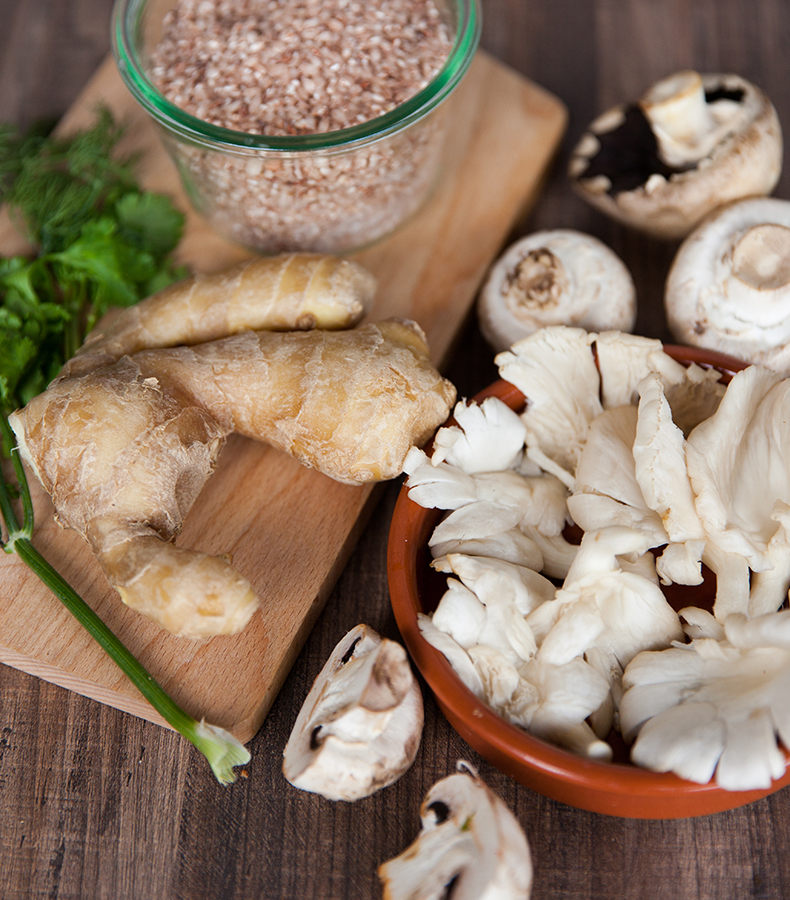 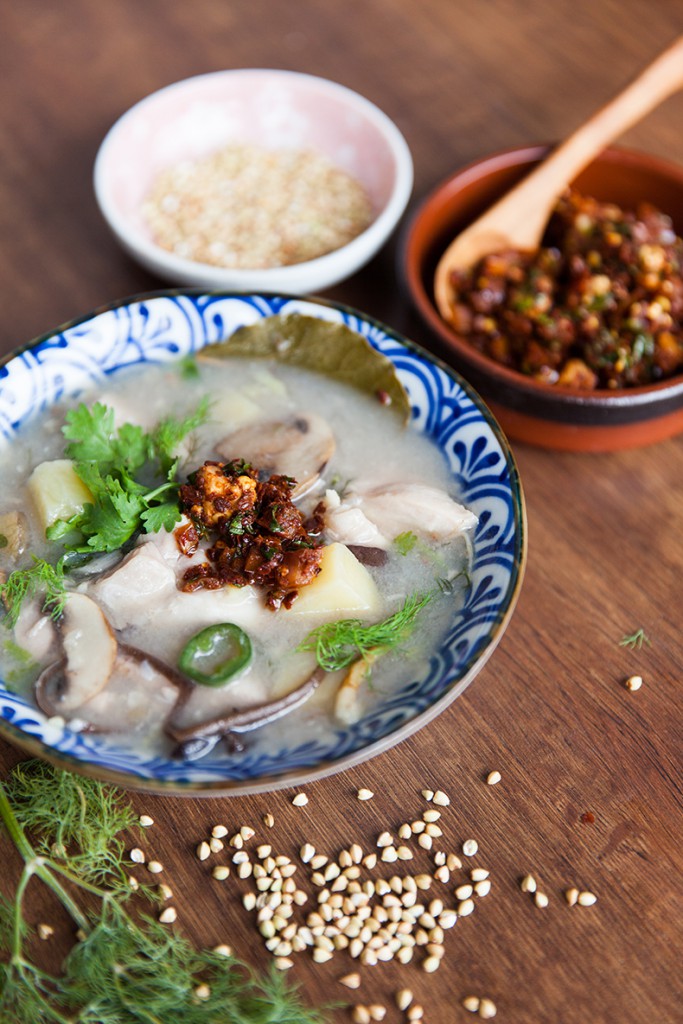