In Japan, once it starts getting chilly outside, it’s that time of year again when comfort food means a good old-fashioned nabe, or Japanese hot pot. Mizutaki is one of the classic nabemono, communal stews which have long been a hallmark of home cooking in Japan. The term nabe refers to the vessel itself, the donabe, a fired clay casserole dating back centuries to a time when the home was oriented around the hibachi, an open charcoal stove where family meals would take place. Today, the hibachi is no longer a common feature of Japanese homes, but the donabe is still placed in the center of the table, symbolizing the familial bond of an intimate social gathering. Once the soup is prepared, each person eats communally from the pot in the center of the table.

Mizutaki is said to have been created by combining Chinese and Western elements. It was said the man responsible  for the dish was Heisaburo Hayashida, the proprietor of a famous shop now located at 3 Hirao, Chuo Ward. A Nagasaki native, Hayashida traveled to Hong Kong at the age of 15 and lived with an English family. He studied Western cooking during his stay. After returning to Japan, he blended consommé with the Chinese method of simmering chicken in water to create a plain soup. To this, he added seasonal vegetables, udon, and mochi to create a type of zosui in the Japanese style. He brought the dish to Fukuoka in 1905 when he opened his shop, Suigetsu. From there it spread throughout the country, where it became known as Hakata-ni. It is a nationally known Fukuoka cuisine. Mizutaki was initially served in the Ryotei (a traditional, luxuriously appointed restaurant) as a simple hot pot. In response to Goryon-san (landladies from the merchant families) wishing to provide more nourishing and tasty meals for their families, tofu and vegetables were added to make it a heartier dish.

One very interesting thing I have learnt is mizutaki is actually eaten by the residents of Fukuoka throughout the year especially in summer as it is thought to give them more energy. In other parts of Japan, most nabes would be only consumed during the cold winter months. The reason why mizutaki is popular was that typically in Japanese homes, most stocks are made from boiling bonito, kelp and seaweed. However, mizutaki employs a technique that the Chinese used to boil bones to get a rich stock which would take minimally 4 hours.

Run by a poultry farming company, they only use meat from their own chickens, which are given a special feed containing seaweed and herb extracts. The meat has a rich umami flavor and is delivered directly from their processing facility in northern Kyushu for guaranteed freshness. Central to the dining experience is the broth, which is light in taste yet deeply flavourful. We had a piece of collagen added to our stock and it became a milky colour with very rich umami flavours. To enjoy mizutaki, we were told to taste the soup before eating the chicken, then adding vegetables to the soup. To enrich the flavour, we were provided with Mataichi salt (natural sea salt) from Kyushu. The flavour of the chicken can be more fully appreciated when complemented by Ponzu (vinegar dip), while Yuzu Kosho (green chilli pepper) gives it a spicy kick. We were told that to properly enjoy mizutaki, first put the chicken broth in a bowl, add Hakata green onions and kotonegi for flavor, and savor the taste. Then eat the chicken. Next, put Chinese cabbage or cabbage into the pot and add tofu, spring chrysanthemum, and mushrooms. The wait staff added tsukune, bite-sized meatballs flavored with ginger and scallions into the broth.  After eating all the ingredients in Mizutaki, we made Zosui, risotto like thing using the flavorful left over broth seasoned with soy sauce and sake with rice and local eggs from their farm.

In Kagoshima, we had a traditional dinner at the Shiroyama Hotel and one of the dishes we were served a soup with rice and chicken, shredded omelette and a very uniquely thinly sliced shiso leaf. I was told this is called keihan. Totally mesmerized and I could not put my spoon down. It was comforting and reminded me of Teochew style porridge. Keihan (“chicken-rice”) is a local dish of the Amami Islands, Kagoshima Prefecture in the south of Japan. It is still enjoyed by many who like the comforting taste of a chicken rice soup. It is also a great way to use up those leftover rice! It is generally cooked with chicken, and although the exact recipe can vary, it often includes ingredients such as thinly shredded egg omelette, ginger and shredded radish pickles, dried shiitake, orange peel, nori, soup stock and sake. It is a popular meal in Kagoshima Prefecture, and a standard school lunch menu.

The origin of Keihan rice is unclear. One theory is that it evolved from a local variant of takikomi gohan, in the town of Kasari in Amami Ōshima, but it is also possible that the dish was brought into Amami from the Japanese mainland. It is thought to date back at least as far as the Edo period (1600~1867); the lords of Kagoshima, the Shimazu clan, would often serve Keihan rice when entertaining government officials, and the recipe features in many contemporary cooking books.

When I set out to create a new souperinspiration, I was going back and forth between the 2 soups that struck me as Comfort soup for the Japanese soul. I just could not decide between Mizutaki and Keihan. It struck me, why not have the best of both worlds, cooking keihan using mizutaki techniques resulting in a really rich soup broth filled with collagen. We cooked the stock from scratch with no added preservatives, colours or flavourings  for 8 hours to achieve a rich gelatine like consistency and a milky white colour. This has been the trend of late as collagen has been said to boost firmness of skin, strengthens blood vessels and boosts blood supply and enhances metabolism to help break down fats. Definitely a beauty booster and perfect for maintaining youthful skin and slow down the aging process. This was in turn used to cook marinated chicken, white radish, and a whole array of vegetables with the addition of barley instead of rice for something different. The toppings are reminiscent of the real deal with shiso leaf, ginger pickles, shredded egg omelette, seaweed and spring onion. It worked wonderfully well and to me this is the BEST CHICKEN SOUP I ever had which embodies true comfort food, traditional, heartwarming and nutritious to a T! 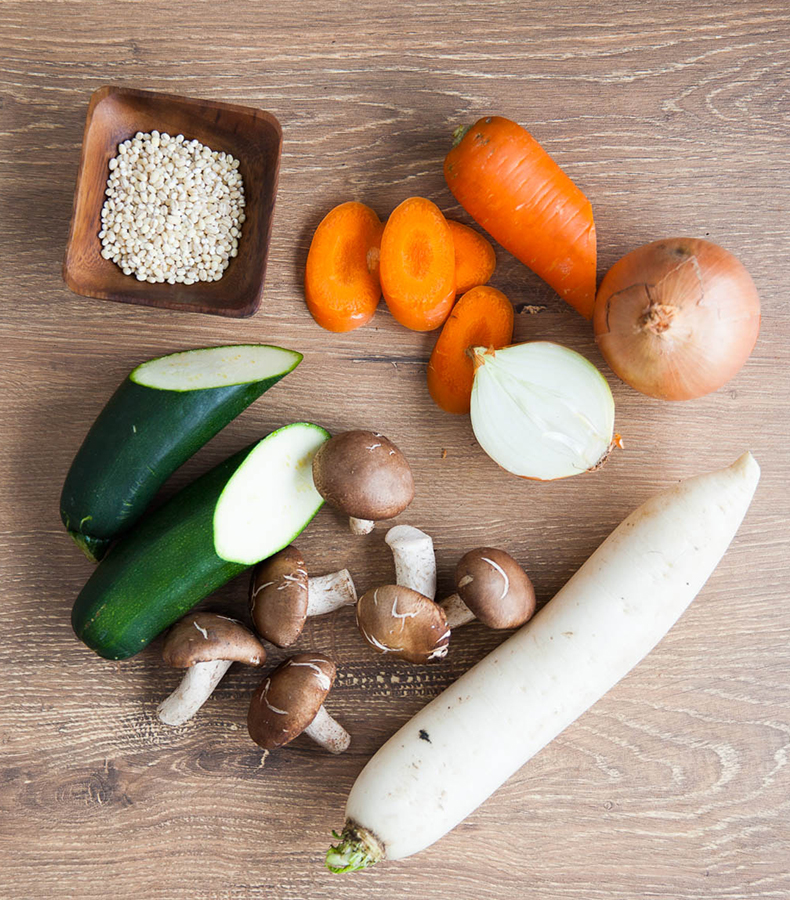