The global vogue for all things wasabi have seen products such as wasabi peas, wasabi popcorn, wasabi seaweed snacks, wasabi hummus and dips hit the shelves and becoming popular. My recent trip to Japan especially to Daio Wasabi farm made me jump on the wasabi bandwagon too. The idyllic scene of old-fashioned, wooden water wheels alongside the river at the Daio Wasabi farm in rural Azumino City in Nagano just made wasabi that little more special. The farm has multiple large fields with a meticulously maintained network of small streams that constantly provides each wasabi plant with clear, flowing water from the Northern Alps. Only under such pristine conditions is wasabi cultivation possible. I was like that is easy, wasabi is an easily readily available ingredient in Singapore, in tubes and also in powder format. I was very quickly heartbroken and felt cheated for all these years when I was told the hard truth by my very hip wasabi master and guide, Shigetoshi san. The green pasty stuff I mix in with my soy sauce is in fact horseradish or seiyo wasabi, a spicy relative of the Japanese horseradish or wasabi japonica. The likelihood of having ever tried the real thing outside of Japan is slim to none. Although wasabi is green and hotter, it does share a similar profile evoking a sense of a sharp shooting sensation up our noses. I loved how innovative the folks at Daio farm are, we sampled wasabi beer and wasabi ice cream and they was even wasabi juice and wasabi curry.

In Kagoshima, we had a traditional dinner at the Shiroyama Hotel and one of the dishes we were served was kurobuta tonkotsu, a black pork stew cooked with Sakurajima daikon and konnyaku jelly. The pairing of daikon and konnyaku in a meat stew was amazing. This was definitely a highlight for me, enjoying konnyaku for the first time. I actually really liked the taste especially in a stew after prolonged cooking. It has a delightful bouncy texture and a good contrast to any melt in your mouth meat stew. On doing further research, I realised that this was truly a special ingredient, commonly called miracle diet food. Off the south west coast of Japan is an island which Chinese legend once referred to as “the land of happy immortals”. Today, the “immortal” islanders living on Okinawa enjoy the longest life expectancy in the world. The Okinawa lifestyle – in particular the diet – is often cited as the main reason for the islanders’ longevity. And konnyaku has been cited as one of the specialist ingredients in their diet.

Konnyaku is made from the pounded roots of a yam-like plant called konjac. The jelly-like ingredient has almost no calories, no sugar and no fat. It contains 90 per cent water. And much of the remaining 10 per cent is made up of glucomannan – a soluble fibre. This polysaccharide makes konjac jelly highly viscous and may be responsible for many of its health benefits as used in traditional Chinese medicine, detoxification, tumour-suppression, blood stasis alleviation and phlegm liquefaction. Perhaps this is why, on the island of Okinawa, konnyaku is renowned for “cleaning the stomach”.

Nothing beats a comforting bowl of beef stew or beef tongue stew. In Sendai, Tohoku region, it is a speciality. There are at least 10 restaurants selling gyutan at the train station and there is actually a Gyutan street called Gyutan Dori in Sendai showing how popular this delicacy is. I have learnt from the chef at Dateno Gyutan that Gyutan has its origins in postwar Japan. Keishiro Sano, a yakiniku (grilled meat) restaurant owner, figured he could save money and make a new type of cuisine in the process by using the cow tongues and tails discarded by US occupation forces. The result, of course, was gyutan.  They use a special part of the tongue that is hidden inside the throat area and a special technique to draw the blood out so the tongue will not have the bloody taste. He opened up Aji Tasuke to sell his new creation in 1948. The citizens of Sendai also thought it was a strange food at first, but they tried it and quickly got hooked.

It is particularly this tenacity and innovativeness that the people from this region have, really made me admire them more. Typically, it is lightly salted and grilled on charcoal. However, over the years, the way of eating gyutan has evolved to curries, stews and even in sausages. When stewed, one could not really differentiate the both. What I have learnt, was a lot of thought is put into choosing the right beef tongue to use depending on seasonal variations. For example, in Australia and New Zealand, in winter months, the beef tends to be fattier so the beef tongue texture is different. Different feeds causes different fat content and I learnt that the Japanese people prefer marbly, soft cuts better. However, there is a growing trend of Japanese who prefers grass fed beef despite the fact the meat would be tougher. It is perceived to be healthier and less fatty. This cut would be great as a stew rather than grill to allow the beef a longer simmering time.

At Koiwai farm in Morioka, Iwate, we enjoyed the best soft serve ice cream made from the Farm’s fresh milk. Koiwai is a 3000-hectare ( 7400-acre ) private farm located scenically at the base of Mt. Iwate. Koiwai is most famous for its dairy products and as a popular tourist destination, with about 750,000 visitors every year. We tried non homegenized milk sold on the farm premises and it has to be the most creamy milk I ever had.

My Inspiration mood board for Nikujaga Beef stew with wasabi

According to Japanese friends, there is a category of cooking known as ofukuro no aji (mother’s flavour), something simple, homely and evokes strong feelings of nostalgia. Nikujaga or stewed potatoes with meat is one such mainstay. Traditionally, this meat and potato dish only contains a small amount of meat, which is basically there for flavour rather than substance. It is typically simmered in a soy, mirin, and sugar broth with vegetables. In eastern Japan pork is commonly used, while in western Japan beef is preferred. The finished dish–a hearty stew–is sweet, savory, and utterly comforting. Nikujaga was invented by chefs of the Imperial Japanese Navy in the late 19th century. The story was that Tōgō Heihachirō ordered naval cooks to create a version of the beef stews served in the British Royal Navy. Its origins go back to the Meiji era, when the Japanese Navy set up its base of operation for the naval fleet in Maizuru. Ultimately, the chef made something different from what was ordered, but still very delicious. Since then, it has become a specialty of the Japanese Navy and gotten its name, nikujaga. This recipe has been kept in the Japan Navy Cooking Management Book since then, and has continued to be a specialty of Maizuru even today.

Putting all these elements together, I knew I wanted to create a hearty Japanese beef stew with a twist, adding the wasabi element, a touch of cream for luxury and konnyaku for its zero calorie miracle diet goodness. I have used japanese horseradish as I really still wanted that element of nostril clearing fiery taste that is similar but may not be as sharp as the real deal. 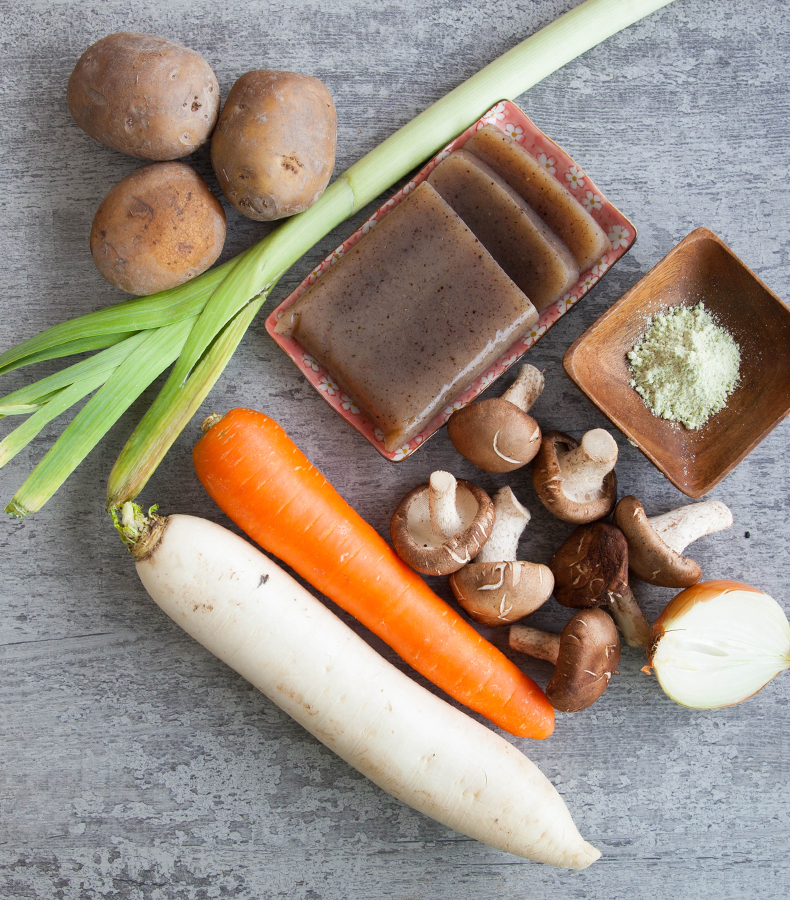 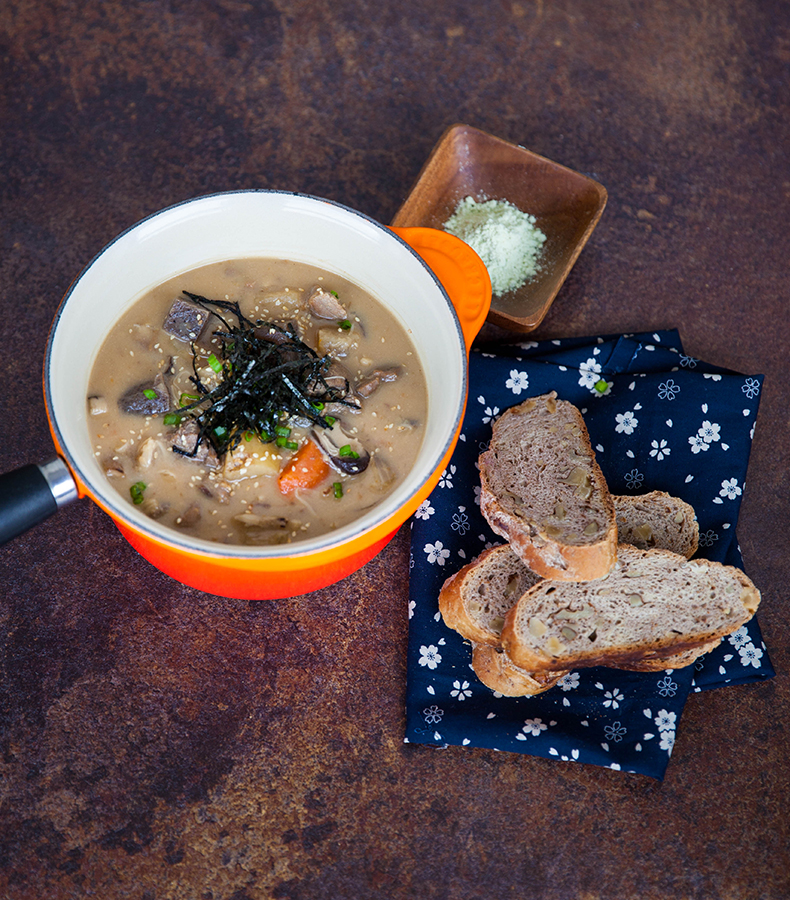