One of my favourite spice has to be black pepper. I add it to all my food, especially my soups and stews even without actually trying the soup. I have researched online and this holds true for most cooks and chefs. A pinch of black pepper is added to almost every type of recipe imaginable. Once used as currency and presented to the gods as a sacred offering, it is fortunate that this most popular of spices is available throughout the year. Black pepper comes from the pepper plant, a smooth woody vine that can grow up to 33 feet in hot and humid tropical climates. They begin to bear small white clustered flowers after 3 to 4 years and develop into berries known as peppercorns. Ground peppercorns produce the spice we call pepper.

Most of us do not know that black pepper, green pepper and white peppercorns are actually the same fruit (Piper nigrum); the difference in their color is a reflection of varying stages of development and processing methods. Black peppercorns are made by picking the pepper berries when they are half ripe and just about to turn red. They are then left to dry which causes them to shrivel and become dark in color. Alternatively, green peppercorns are picked while still unripe and green in color, while white peppercorns are picked when very ripe and subsequently soaked in brine to remove their dark outer shell leaving just the white pepper seed. Black pepper is the most pungent and flavorful of all types of peppers and it is available as whole or cracked peppercorns or ground into powder.

Native to India, pepper has played a very important role throughout history and has been a prized spice since ancient times. Since ancient Greece, pepper has held such high prestige that it was not only used as a seasoning but as a currency and a sacred offering. Pepper was used to both honor the gods and to pay taxes and ransoms. During the fall of ancient Rome, the invading barbarians were even honored by being given black pepper. Additionally, in the Middle Ages the wealth of a man was often times measured by his stockpile of pepper.

The reason that pepper was so cherished is that it served important culinary purposes. Not only could its pungency spice up otherwise bland foods, but it could disguise a food’s lack of freshness, the latter being an especially important quality in the times before efficient means of preservation. Pepper became an important spice that catalyzed much of the spice trade. This not only led to exploration of many undiscovered lands, but also to the development of major merchant cities in Europe and the Middle East.

Every Chinese New Year, a popular fast food chain’s repertoire would include this black pepper beef burger with the infamous twister fries. It is definitely something that many fans look forward to. Singaporeans love all things black pepper, from black pepper crabs to their burgers. So this is our healthy and hearty rendition! Succulent grass-fed New Zealand beef cubes seasoned with an abundance of black pepper to jazz up this comforting stew. The meat is simmered in a savoury sauce of red wine and other Asian flavours with onions and mushrooms to tantalize our tastebuds. Served with wanton crisps to wish all a crackling and prosperous new year ahead! 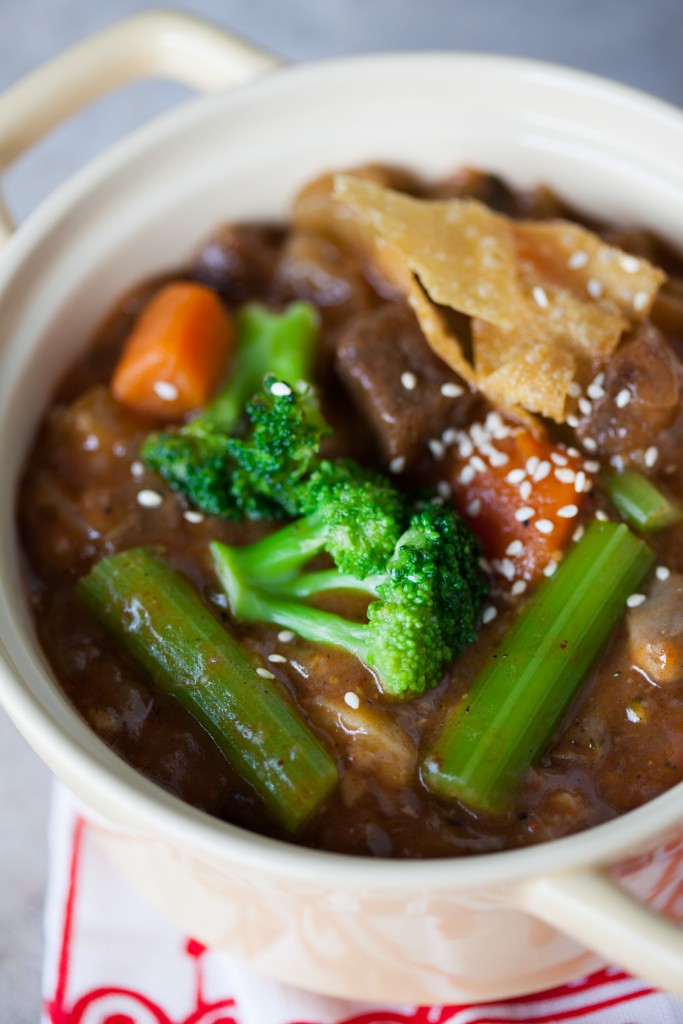