Japan is obsessed with food and at no time is this more obvious than when you take a trip to a new part of Japan. Every town seems to have its own delicacy or speciality to try. Mentaiko is the star product of the Hakata ward of Fukuoka city. Mentaiko is a delicious ingredient and so well loved it was nominated as Japan’s number one side dish in the Japanese weekly magazine, Shūkan Bunshun. It is a spicy form of Pollock roe (eggs).  There are now over three hundred producers of Mentaiko and over two hundred shops selling it as an omiyage (a souvenir) to take home with you. It can be eaten raw or cooked, and whilst it is sometimes eaten lightly seared by itself, it is often put with other foods to create new delicious alternatives of old favourites. We had the privilege of visiting a mentaiko factory, the Yamaguchi Aburaya Fukutaro plant.

Here are some interesting facts I learnt about Mentaiko: This marinated roe of the Alaskan pollock was actually introduced to Japan from Korea. The Busan-born Japanese Kawahara Toshio through trial and error refined the flavour from Korean cod roe, and subsequently introduced Mentaiko to the Japanese in 1949. Mentaiko is not exactly cheap due to the tedious process of production. They are made from pollock’s eggs in the Northern Ocean in Hokkaido near Russia, in which the eggs are sorted by hand, not by machines. Today, mentaiko is enjoyed commonly as Mentaiko pasta, Mentaiko pizza, Mentaiko Tamago Yaki (omelette style eggs) and Mentaiko onigiri (rice balls). At the plant, we have seen mentaiko made into a variety of products combined to make mentaiko flavoured crisps, snacks and even spreads and dips.

I was challenged by a friend how I could think out of the box and incorporate mentaiko into soups. At the Hanamidori Hakata restaurant, while we were having the Mizutaki, some possible ways that I could do was with mountain yam or nagaimo. I have learnt that they made a paste with minced chicken and nagaimo was used as the bonding agent giving the chicken tsukune a really nice texture. A Hakata specialty was the serving of mentaiko on grated nagaimo as an appetizer.

For the base of the soup, a visit to Yanagibashi Rengo Market also known as the Kitchen of Hakata inked the fact that it would be seafood based. The Yanagibashi Rengo Market started in 1918 dating back when Akira Abe, a fish peddler carrying seafood purchased at the Ohama fish market to sell on a two-wheeled wooden cart, founded his own store in this place. Gradually, other shops joined him and it became a market place. It later became a Rengo (cooperative) to ensure continuity. It has become a tradition of Hakata for families. Every morning, mothers  would bring their children to the market to buy the freshest vegetables, fish, seafood and sundries. People had a sense of loyalty and trust and after long, became friends. It clearly reminded me of my childhood when my granny used to bring us to the wet market. It was a daily highlight of her otherwise mundane life. The culture continued and when these children grew up and had their own families, they too brought their children. These family traditions hold strong. Customers continuously come back despite the convenience of supermarkets.

At the market, we met Hara san, who worked here since a child, helping his father at the wholesale stall since he was 12. He is a wholesaler at the auction market but comes and work part time filleting fish. We were treated to salmon filleting skills using the Ikejime method. Ikejime is a method of paralyzing fish to maintain its quality. It involves the insertion of a spike quickly and directly into the hind brain, usually located slightly behind and above the eye, thereby causing immediate brain death. When spiked correctly, the fish fins flare and the fish relaxes, immediately ceasing all motion. Destroying the brain and the spinal cord of the fish will prevent reflex action from happening; such muscle movements would otherwise consume Adenosine triphosphate (ATP) in the muscle, and as a result produce lactic acid, making the fish sour. Furthermore, the blood contained in the fish flesh retracts to the gut cavity, which produces a better coloured and flavoured fillet. This method is considered to be the fastest and most humane method of killing fish. All this was done in 5-7 minutes per fish.

Rei san, my translator for the trip shared with me what she cooks at home most of the time. Hotpot or nabe is her favorite as it cooks easily and most importantly not too many dishes to wash. Indeed a comforting one pot meal. Living in Tokyo with a hectic schedule, convenience is of essence and at the same time meals have to be economical and healthy. Hotpots are quintessential Japanese comfort food, easy one pot meals of wholesome ingredients poached in broth or stock. Usually cooked at the table, having hotpot with friends and family is social in nature and a tonne of fun. Cook, eat, cook, eat, enjoying the meal with flexibility filled with conversations as the pot bubbles away.

The final flourish to hotpots, Japanese accents (condiments) add even more aroma and dimension to the myriad of vibrant flavours. Sansho pepper was one of the condiments we explored on our trip. Hida Sansho has been around for the last 40 years and it was started by Kazuhiko san and his wife. Despite its name, sansho pepper is not actually a pepper. I guess you might call it a spice with some peculiar traits. It’s aromatic, earthy and tangy with a bit of lemon. I was intrigued when put directly on tongue, there was a sort of tingling sensation with a numbing effect. The Japanese love sansho in all its forms, and its subtle cuisine benefits from the pepper’s powerful, clean flavor. These ingredients are usually sprinkled and not cooked together as they lose their potency and citrusy zippy fragrance. At 300sgd/kg, you would not want to cook it too. Typically added to rich foods to add another dimension and removes the oily or fatty taste. 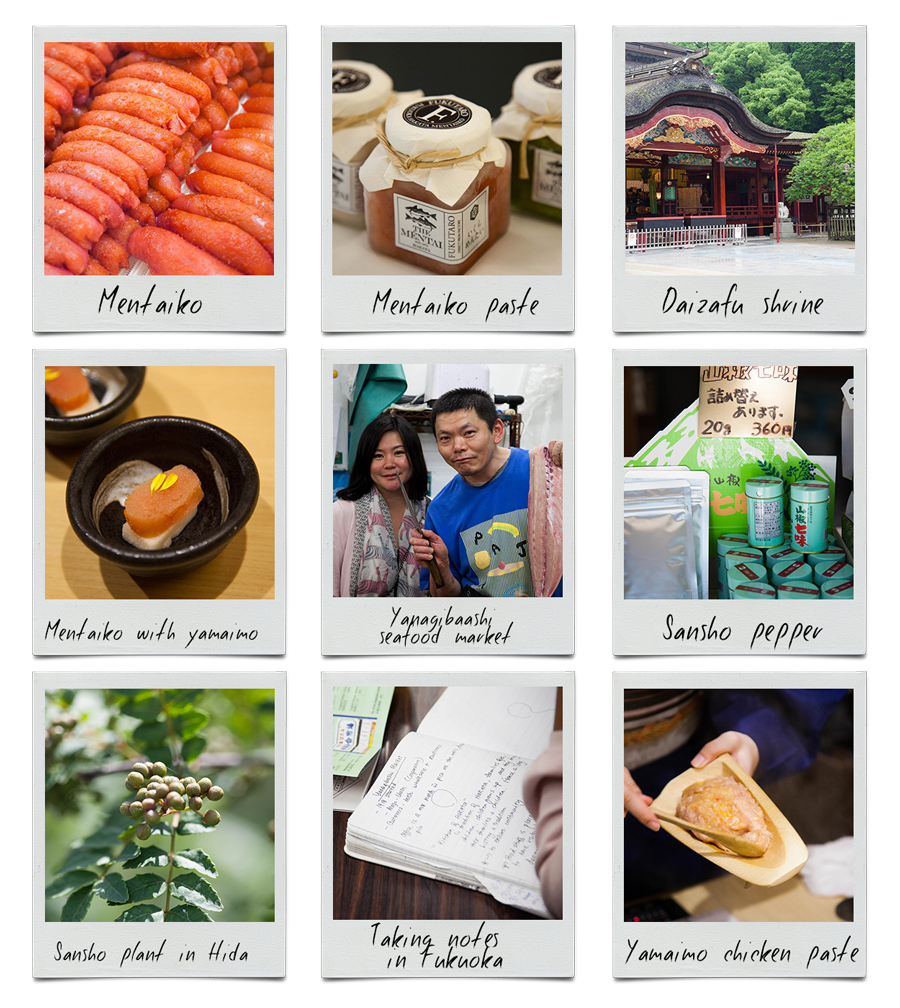 Keeping all these inspiration elements, we have created a salmon head tounyu nabe filled with ichigo tsukune and finished with sweet potato starch harusame, literally meaning “spring rain”. Ichigo tsukune is a mix of ebi (hence the colour of strawberries or ichigo), nagaimo, mentaiko and tofu inspired by the chicken tsukune we had at Hanamidori. My interpretation of Japanese soul food, a delicious, nutritious, sweet, rounded and delicate in flavour. This nabe is very healthy with high volumes of isoflavin, great for the prevention of many cancers, heart disease and osteoporosis. 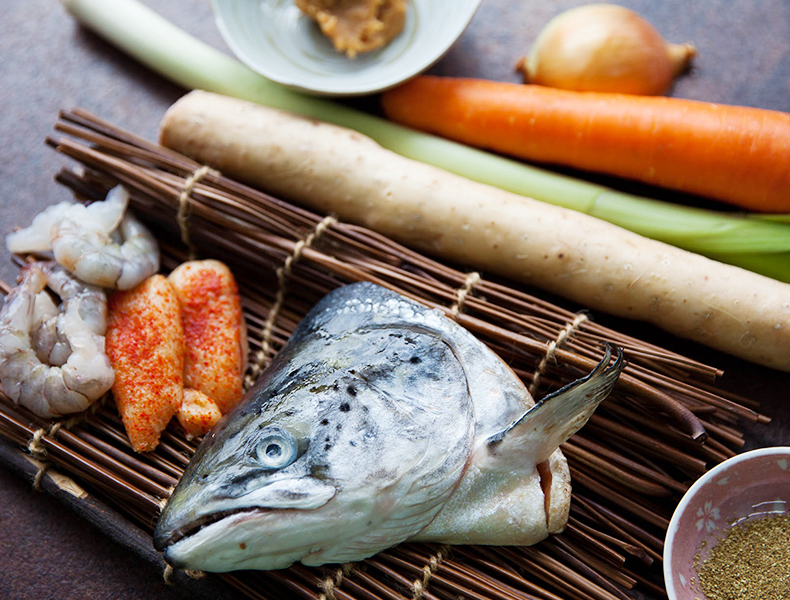 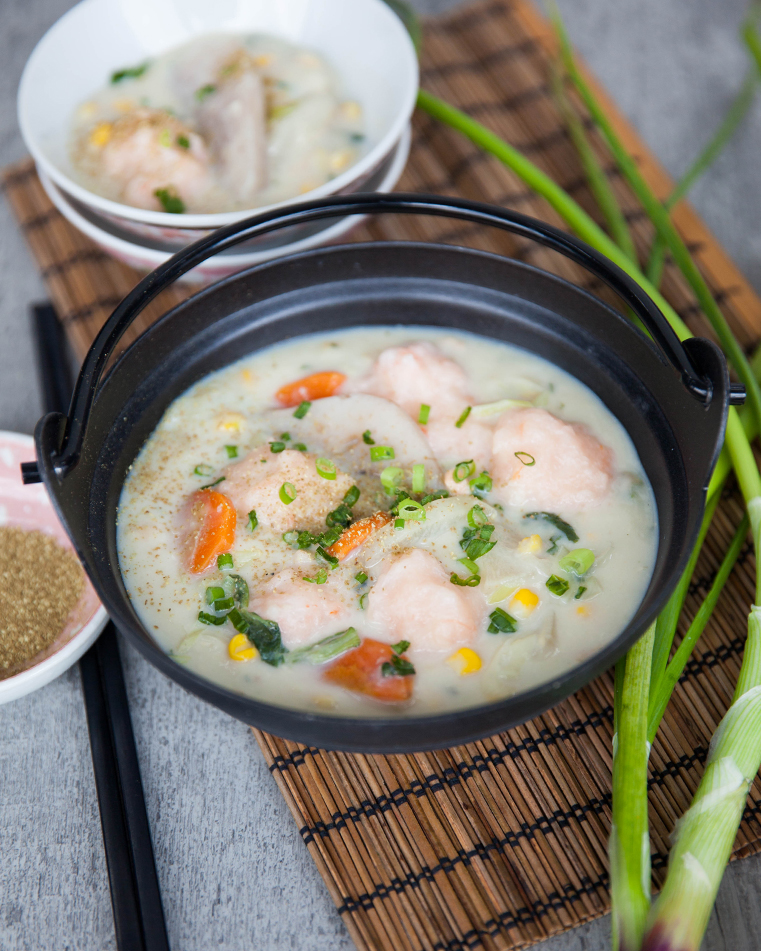 An inspired hotpot combining all the elements of what makes a good nabe.