The protein-rich fermented soybean paste called miso is one of the world’s great flavour foundations adding a savory quality called umami to all sorts of dishes, including soups, salad dressings, vegetables, stews and marinades. According to the The Oxford Companion to Food, miso was first developed in China and the first written reference of it in Japan dates from A.D. 701, and it has long played a starring role in the traditional diet there. The variety and ratio of raw ingredients and the length of fermentation time produce a final product with flavors that range from sweet and mild to salty and rich or pungent; colors that range from pale straw to fudge-brown to almost black; and textures that range from smooth to coarse, or inaka—that is, rustic. A miso may be named for its color, region, or the koji starter with which it’s made. Made from fermented soybeans, there are many well documented health benefits. To read more about miso, its production and its benefits, please refer to my journal entry on The art of Miso |  Why you should eat miso daily?

On this trip to Japan, in Matsumoto City, we met Hayashi san, the president and master shinshu miso maker at Marusho Jozo. Through our conversations, I found out he is 80 years old. But the man, does not look a day past 65 years old. The complexion of his skin, its tautness and most importantly his agility climbing up the ladder to the miso barrels was impressive. I asked him what was his secret. Miso soup of course! Every morning, his wife would make miso soup for him for breakfast. This was enough to convince me that miso may be the answer and we all should be eating miso daily!

Togarashi, the Japanese word for “chiles,” is a group of condiments always including chiles to add flavour, spiciness and aroma. Shichimi togarashi is also called seven spice (shichi is “seven” in Japanese), because seven ingredients are generally used, similar to Chinese Five Spice Powder. Originally sold by herbal medicine shops in the 17th century, but today it is a popular food souvenir at some of Japan’s famous shrine festivals and tourist sites. It works well with fatty foods such as unagi, tempuras, shabu shabu, noodle dishes, and yakitori . The ingredients and proportions used will vary depending on the region, manufacturer, and cook. The ingredients usually include items from the following list: Red pepper flakes (Bansho), White sesame seeds, Black sesame seeds, black hemp seeds or poppy seeds, Sansho (Japanese Pepper), Dark green dried seaweed flakes, Ginger, Rapeseed, Chimpi (dried mikan peel). The red pepper flakes are roasted to bring out its heat and flavour and sesame seeds is said to soften the heat of the pepper.  One such shop selling togarashi is Yawataya Isogoro, an institution founded  270 years ago. Their shichimi has a well-balanced spicy taste and great aroma and is meant to have the distinctive flavour reminiscent of the mountainous region of Shinsu. Visit link here to read more about our experience on togarashi as a condiment to spice up the palate.

Karaimo (“potatoes from China”; “Kara” refers to China, “Imo” is the Japanese word for potatoes) or satsumaimo is Japanese for sweet potato. This root vegetable is rated as the most nutritious of all vegetables when it was evaluated in the States, scoring a whopping 582 points, with carrot coming in at far 434 for the USRDI(Recommended Daily Intake) measuring 6 nutrients (Vit A and C, folate, iron, copper and calcium) plus fibre. This means that sweet potatoes are excellent for your digestion. They are composed mainly of starch, which is very easy to break down and is soothing for the stomach and intestines too. This makes them an ideal healing choice for those suffering from the pain and inflammation associated with stomach ulcers and irritable bowel syndrome. The roughage of sweet potatoes even prevents constipation. And best of all, it is virtually fat free. When we visited Kagoshima and Festivalo Karaimo World, I was greatly fascinated with sweet potato and made a mental note to self that this would have to be an ingredient that I would love to use. Listening to Hiroharu san from Festivalo explained the different types of sweet potatoes planted and their uses (from making desserts to imo shochu), I realised how versatile sweet potato is. 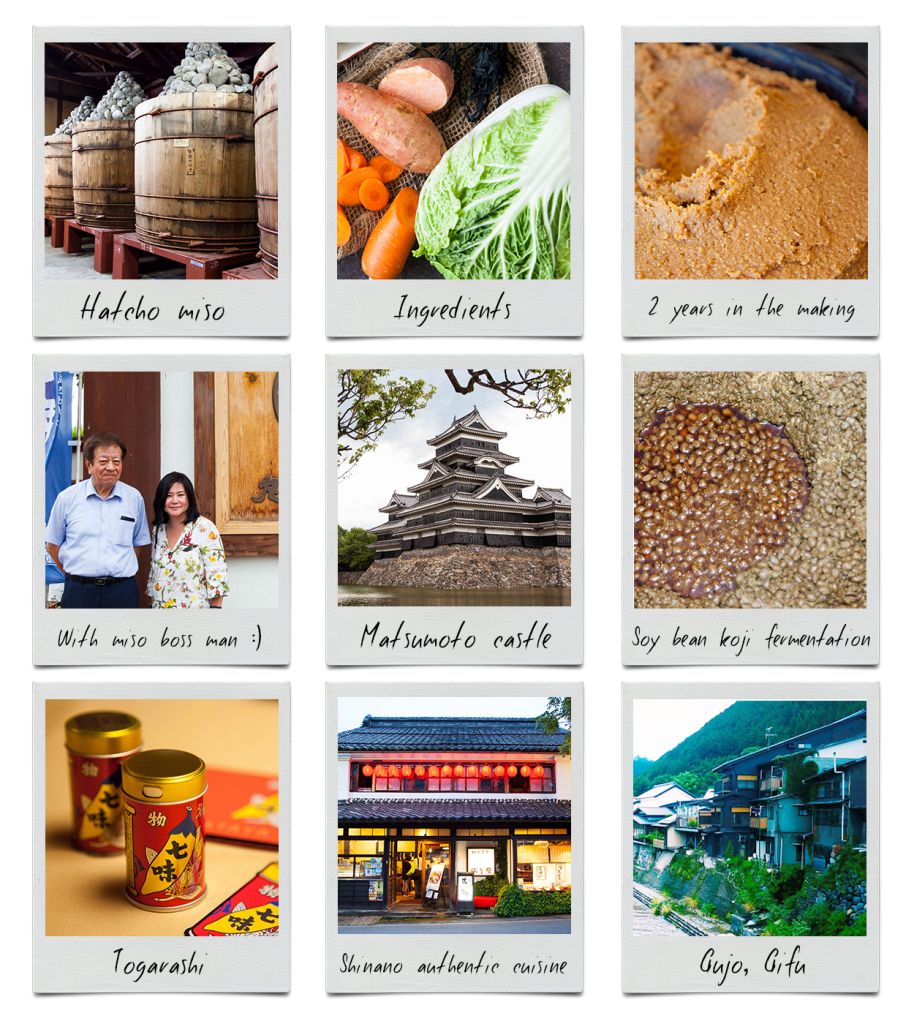 One very important observation and anecdotal account from our hosts, Rie and Junko was that vegetarianism is not common in Japan. Most restaurants do not cater to vegetarians. Lately, there has been a push by the Japanese government and the tourism body to list restaurants serving vegetarian food in a guide book in a bid to cater to the needs of the growing numbers of Indian tourists (many who either do not take beef or are complete vegetarians) or for that matter any tourists with special dietary needs. This is the basis for my souperinspiration, a vegan miso stew made with tofu, sweet potatoes, napa cabbage, wakame and healthy red rice. We have used togarashi as the special condiment for this stew. 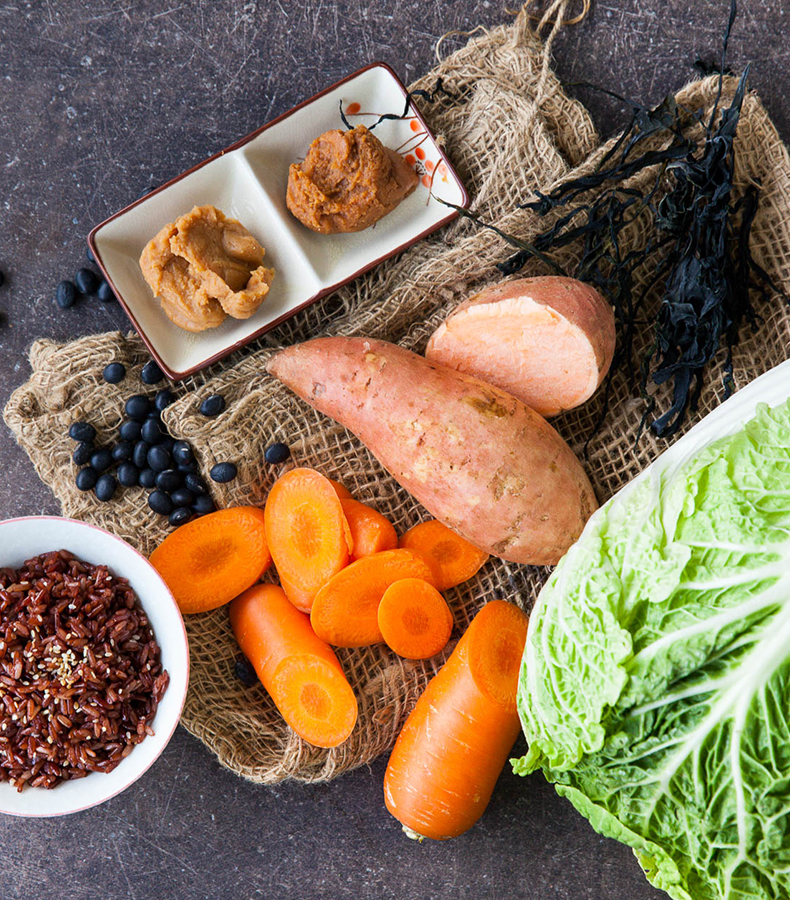 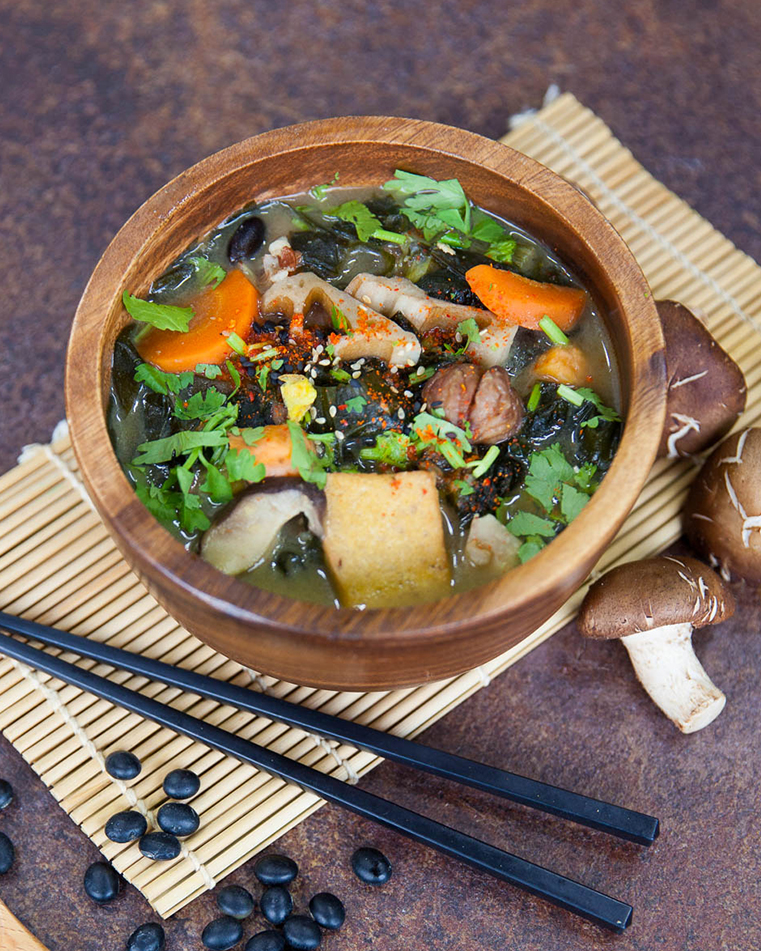