Andy Ricker, founder of Pok Pok in Portland said it well in a 2011 New York Times piece that khao soi is “exotic without being weird and, most important, completely delicious.” It’s the kind of dish everybody can love. We used to have a khao soi noodle dish in our repertoire at the now defunct Soup Broth Asia. It was love at first try. I love the combination of the thick spicy fragrant coconut curry broth with deep fried egg noodles, garnished with raw shallots, coriander, chilli in oil and lots of lime juice . The home made pickled mustard greens garnish helps cut through the richness of the sauce. The flavours were complex and vivid and no wonder it is a popular street dish eaten by the Thai people in Chiangmai. 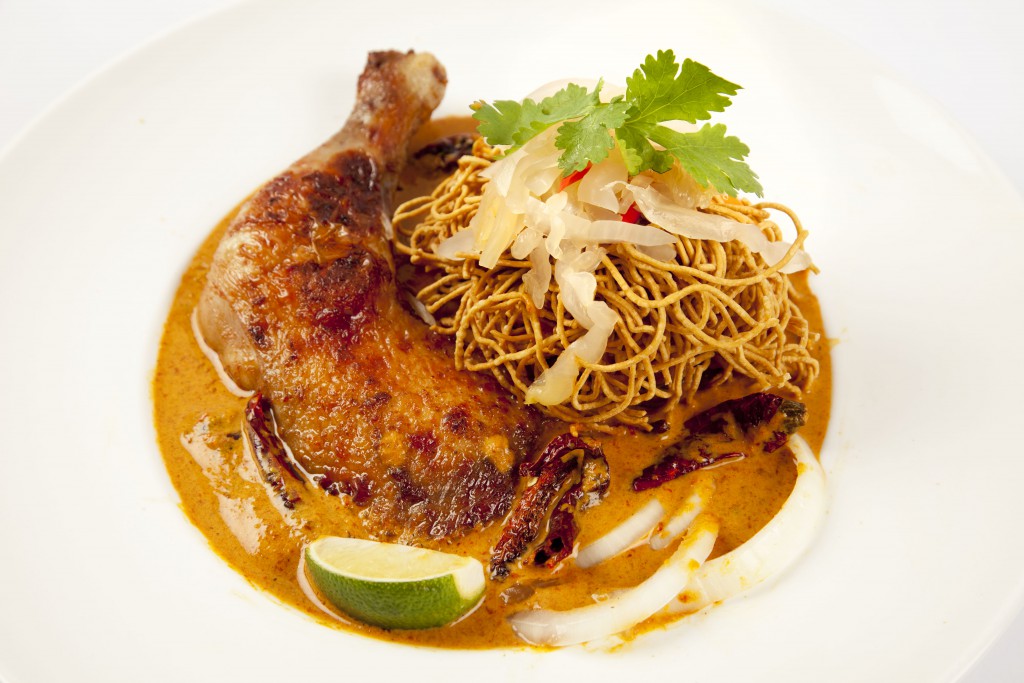 When the chance came for me to do a series of Thai souperinspirations, I jumped at the opportunity to innovate on this well loved noodle dish translating it into a stew. While researching, I have learnt that it is closer to the present day Burmese ohn no khao swe, being a soup-like dish made with a mix of deep-fried crispy egg noodles and boiled egg noodles, pickled mustard greens, shallots, limes, ground chillies fried in oil, and meat in a curry-like sauce containing coconut milk. The curry is somewhat similar to that of yellow or massaman curry but of a thinner consistency. There is some reason to believe that the Thai version of khao soi was influenced by Chinese Muslim cuisine and was therefore likely served with chicken or beef. Different variants of khao soi that are made without any coconut milk and with rice noodles instead of egg noodles are mainly eaten in the eastern half of northern Thailand. 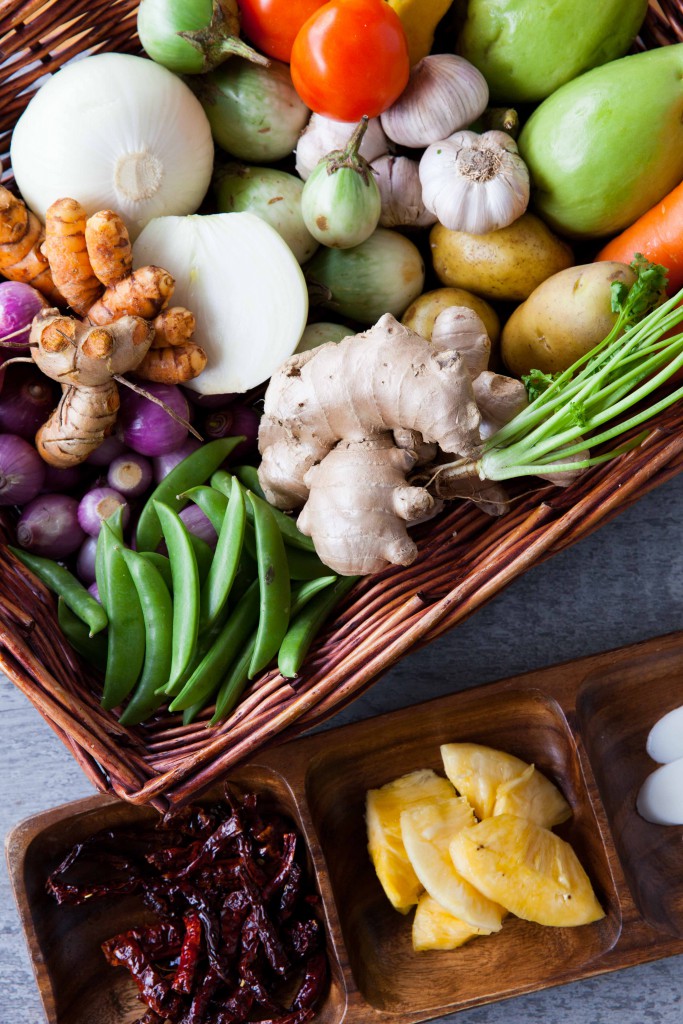 Curry pastes made from scratch

Here, the curry base is made the traditional way with a wet style curry paste using a combination of moist aromatics and dry spices. With the principles of making a South East Asian curry, I added the starchy vegetables, the thai eggplants and the interesting twist I did was the addition of Korean rice cakes instead of deep fried egg noodles. This was inspired by sayor lodeh, a traditional Malay vegetable yellow curry often eaten with lontong, a compressed Malay rice cake or dumpling. 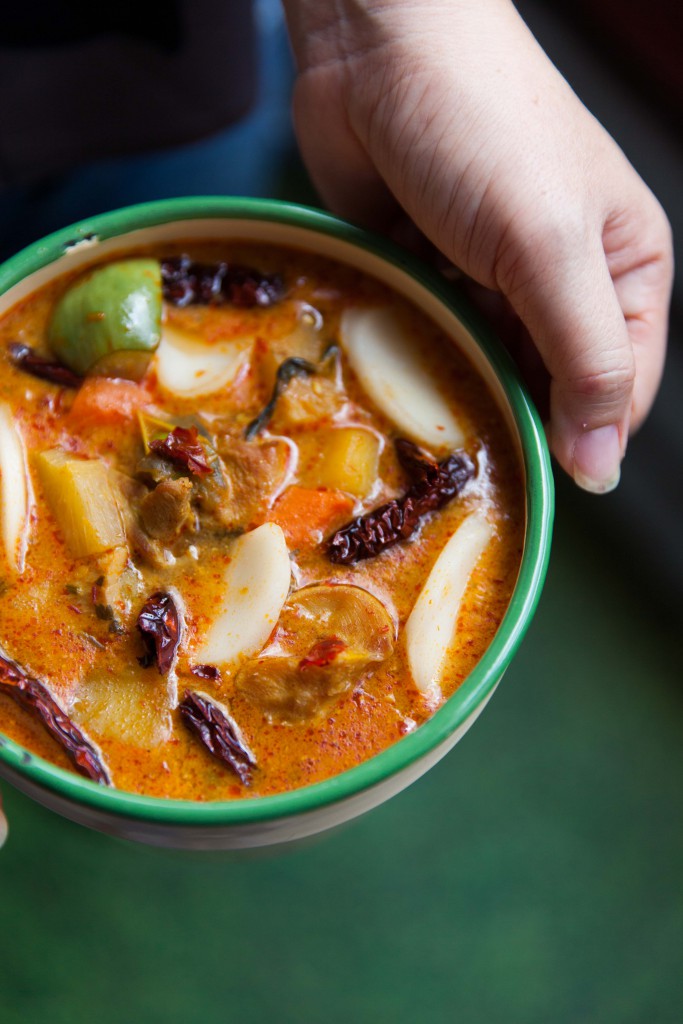 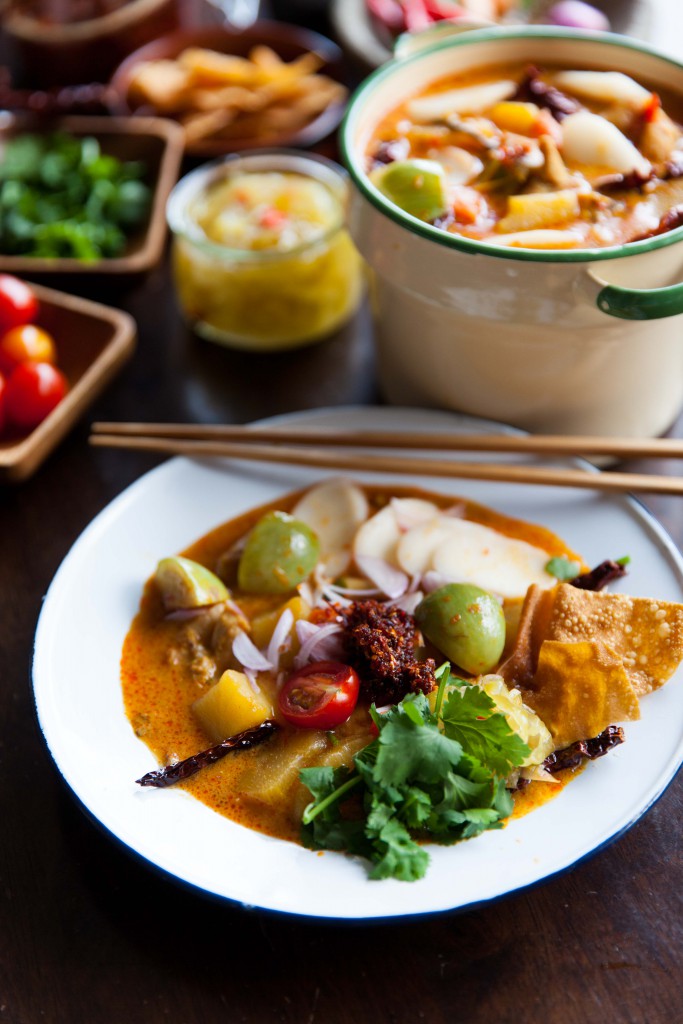