Takayama is a city in the mountainous Hida region of Gifu Prefecture. To differentiate it from other places named Takayama, the city is also commonly referred to as Hida-Takayama. It has the nickname “Little Kyoto of Hida” as it has managed to retain a traditional touch especially in its beautifully preserved old town.

As clear as the mirror on the wall, the stream of water runs through the Mie Prefecture in the island of Honshu in Japan. The Miyagawa River is the longest in Japan, best known for its breath-taking clarity and purity. Through old Takayama, the river is spanned by several small bridges including Kajibashi, Yanagibashi, Ikadabashi and the famous red Nakabashi. Numerous pools in the river are filled with giant gray and orange carp and ducks.

We were in awe when we first saw Takayama’s s Edo-period buildings with gorgeous dark wood timbers. Walking through the narrow streets made us feel like we have stepped back in time. Most of the buildings now house restaurants and souvenir shops, selling laquerware and other handicrafts, as well as Sarubobo dolls. 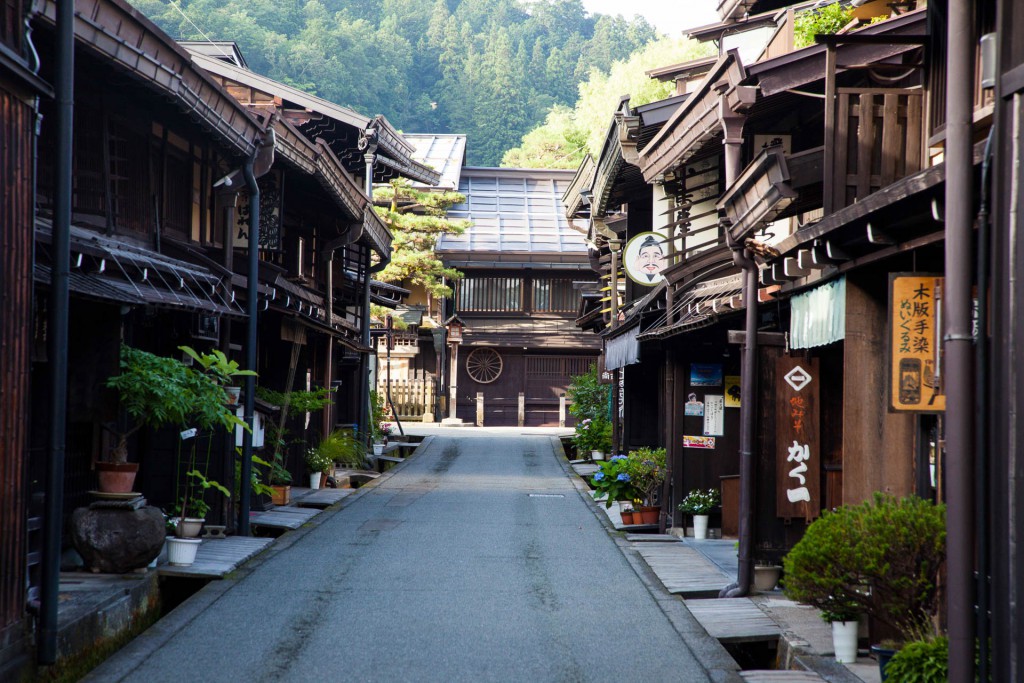 Takayama’s old town has been beautifully preserved with many buildings and whole streets of houses dating from the Edo Period (1600-1868), when the city thrived as a wealthy town of merchants. The southern half of the old town, especially the Sannomachi Street, survives in a particularly pretty state with many old homes, shops, coffee houses and sake breweries, 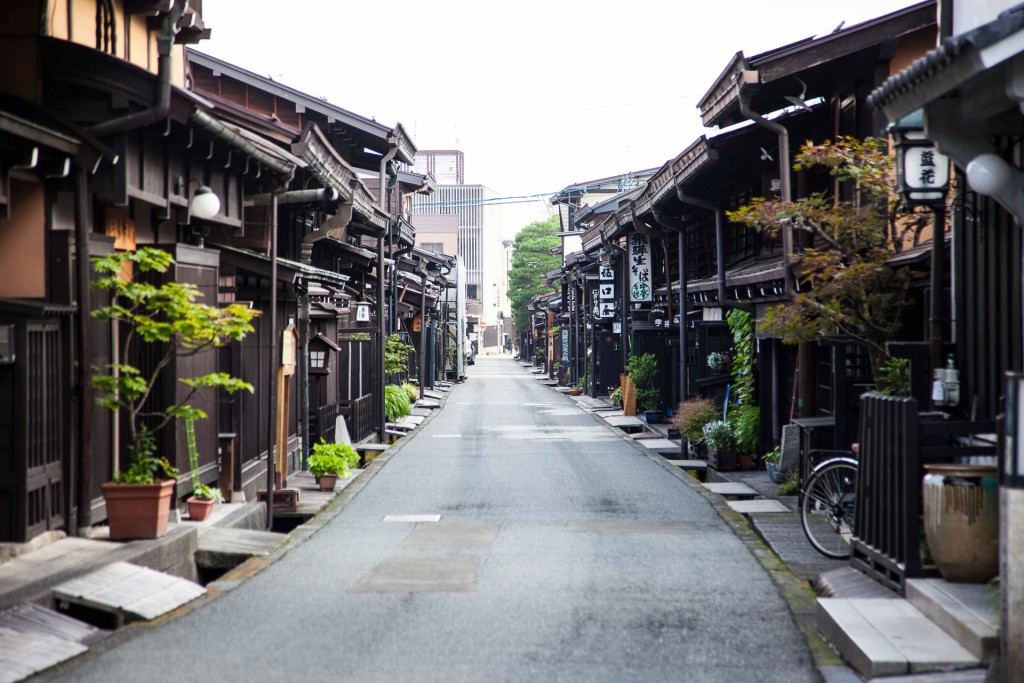 The pride of Takayama is the beautifully, preserved old town area, where merchant and private houses are said to be constructed dating back the Edo Period.

Sake is one of Takayama’s local specialties. Several old sake breweries can be found in Takayama’s old town, recognized by sugidama (balls made of cedar branches) hung over their entrances. Small samples of sake can be purchased at some breweries.

Running north to south along an esplanade lined with tree, there are thirteen temples and five shrines here. This area is known as Higashiyama Teramachi. Every temple or shrine has interesting buildings and many have fine statues and other treasured art objects. By visiting Higashiyama Teramachi you will fully understand why Takayama is called “little Kyoto”. 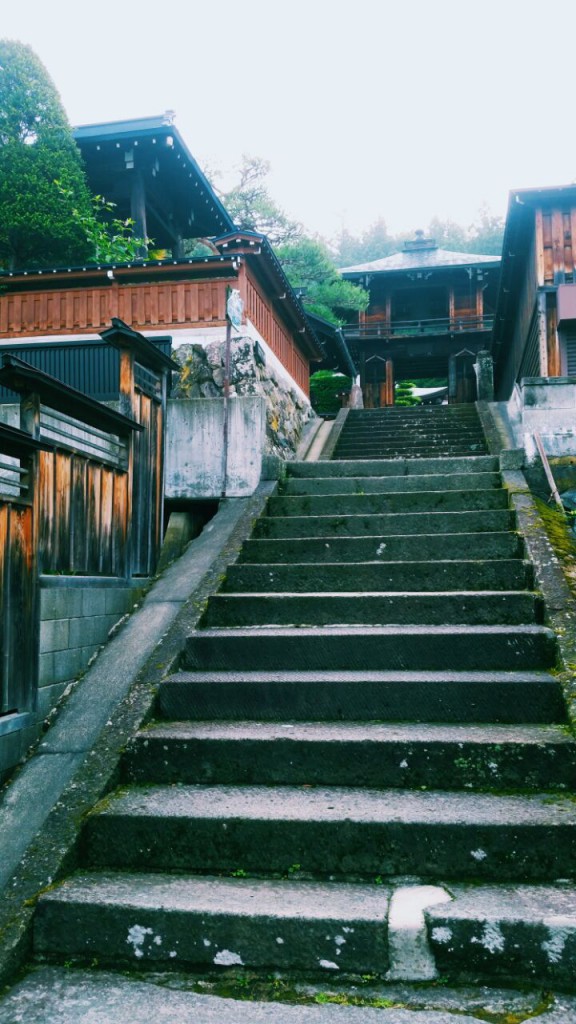 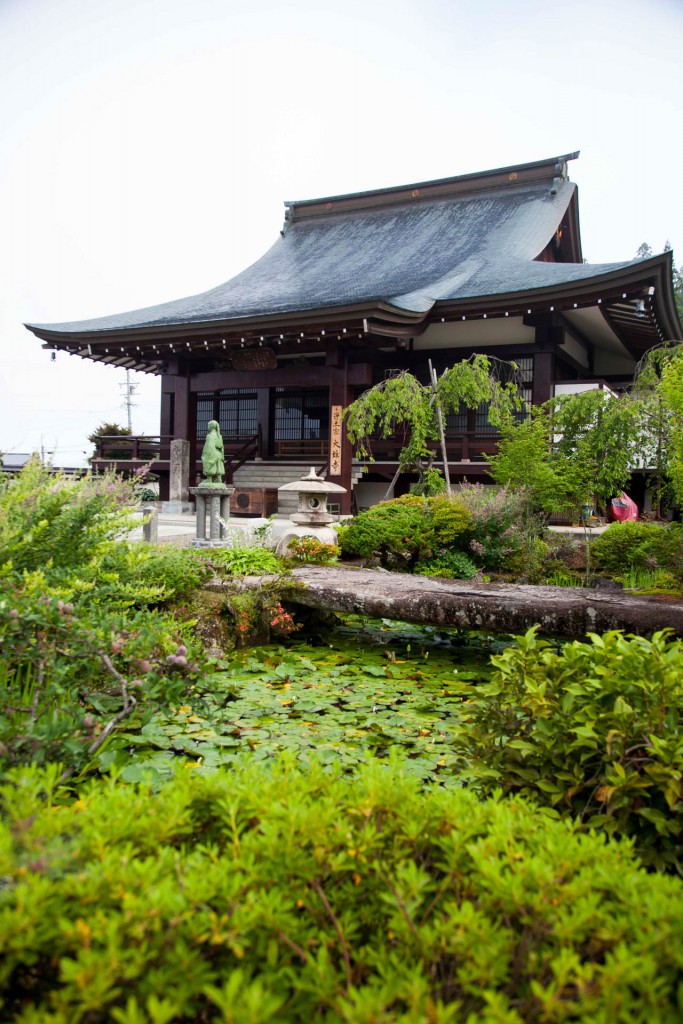 Higashiyama Teramachi. One of the temples found along the route. 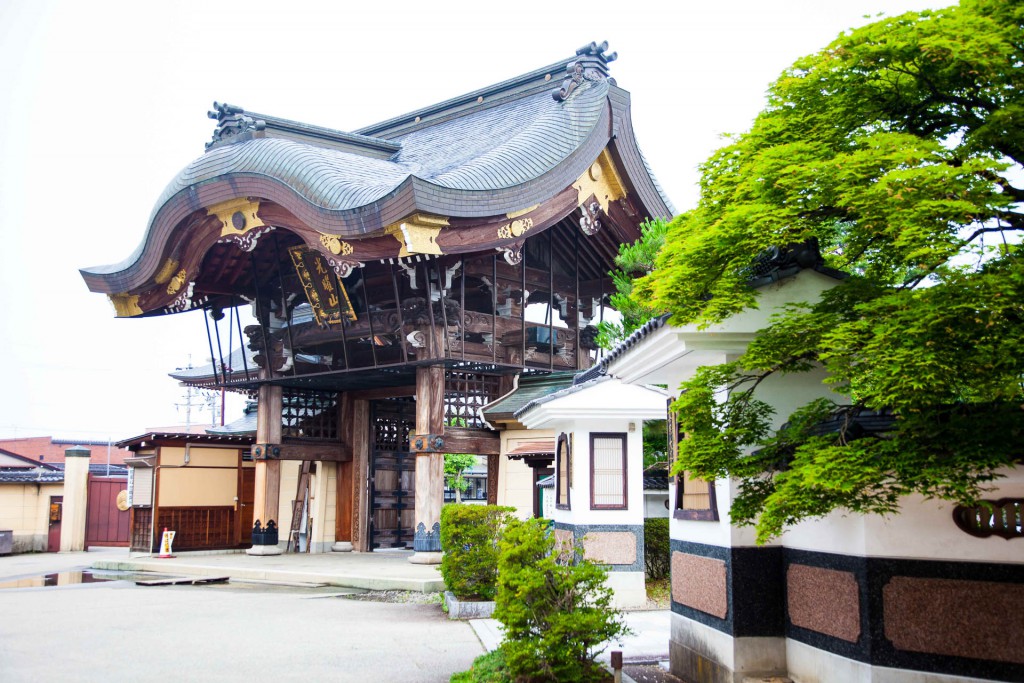 Fujii Art Gallery: This storehouse, built entirely with Japanese cypress in the Edo Manryu style, houses a collection of 2,500 historical art and craft items amassed by Dr. Fujii, who resided in Takayama. Of particular interest are a set of Hina dolls (for the March doll festival) made over 270 years ago (in the early 18th century) known as the Kyoho Hina, and scrolls painted by artists such as Taikan Yokoyama and the monk Ikkyu.

Jinya-mae Market in front of the Takayama Jinya

The Jinya-mae market started more than 300 years ago. The origin of the market started with silk raising farmers who sold leaves of mulberry trees and even today only farmers are allowed to open stalls. Most stalls sell fresh green vegetables, dried foods, and homemade pickles. Unusual ingredients including sansho peppers and wild vegetables.

Most stands sell local crafts, snacks and farm products such as vegetables, pickles and flowers. 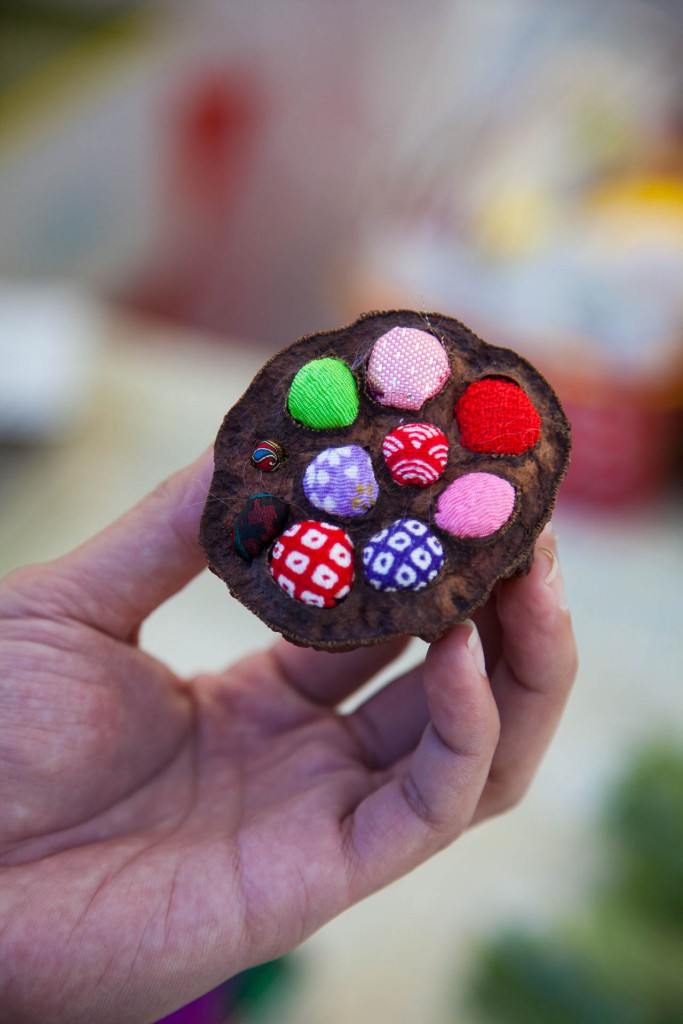 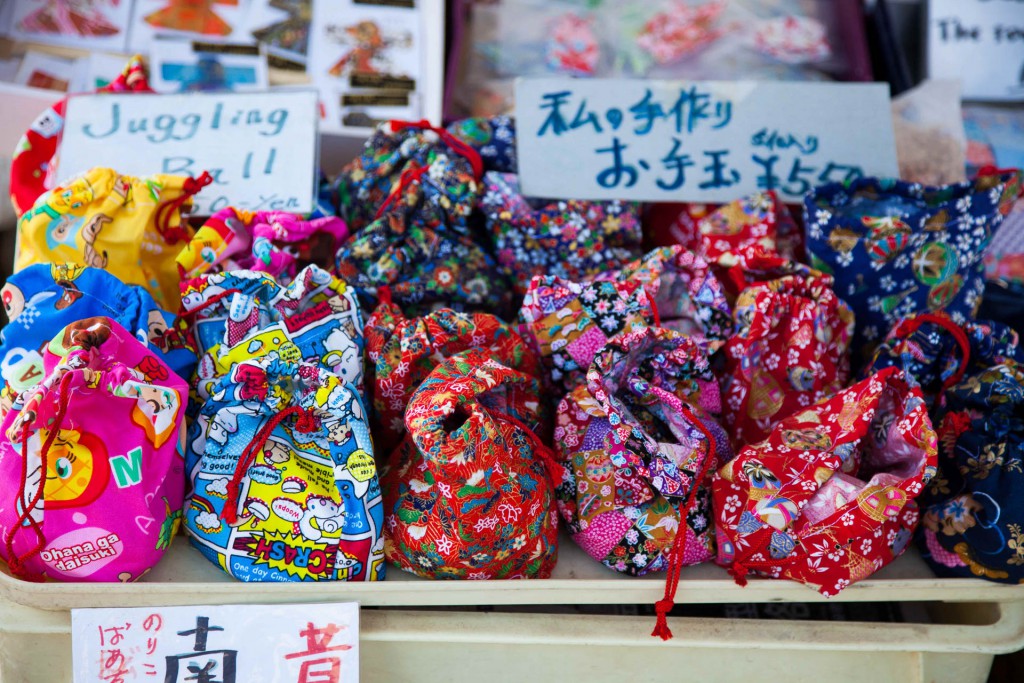 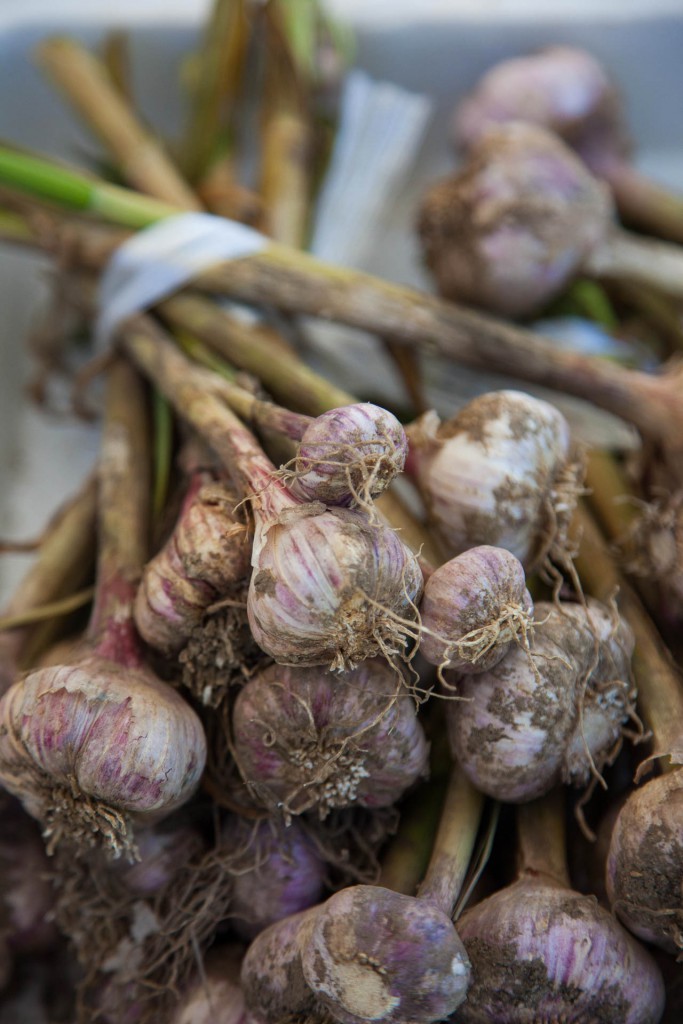 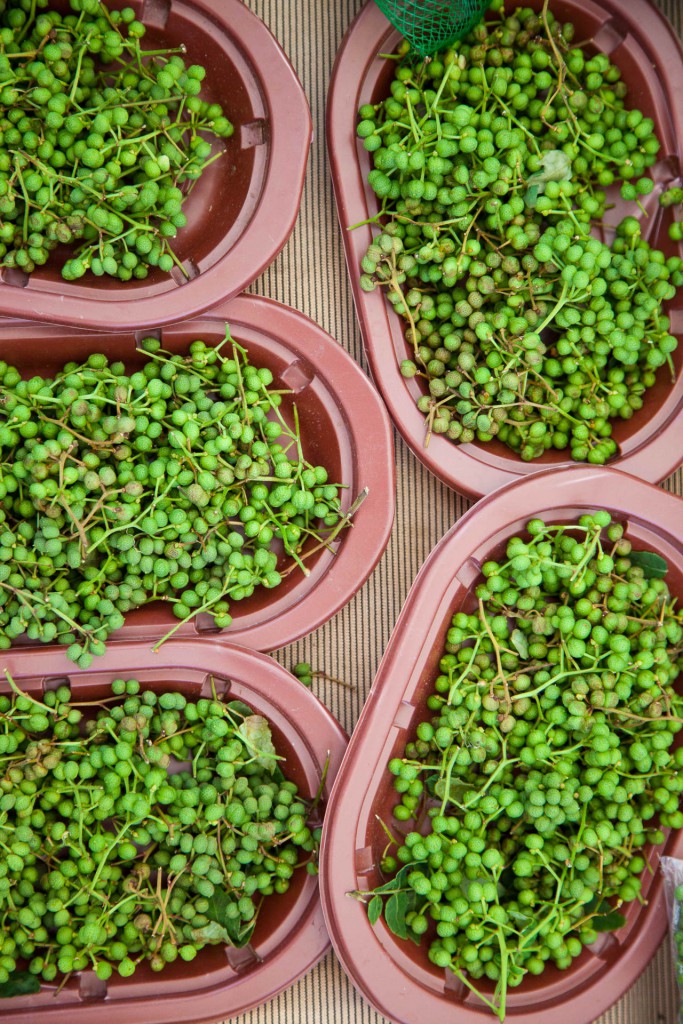 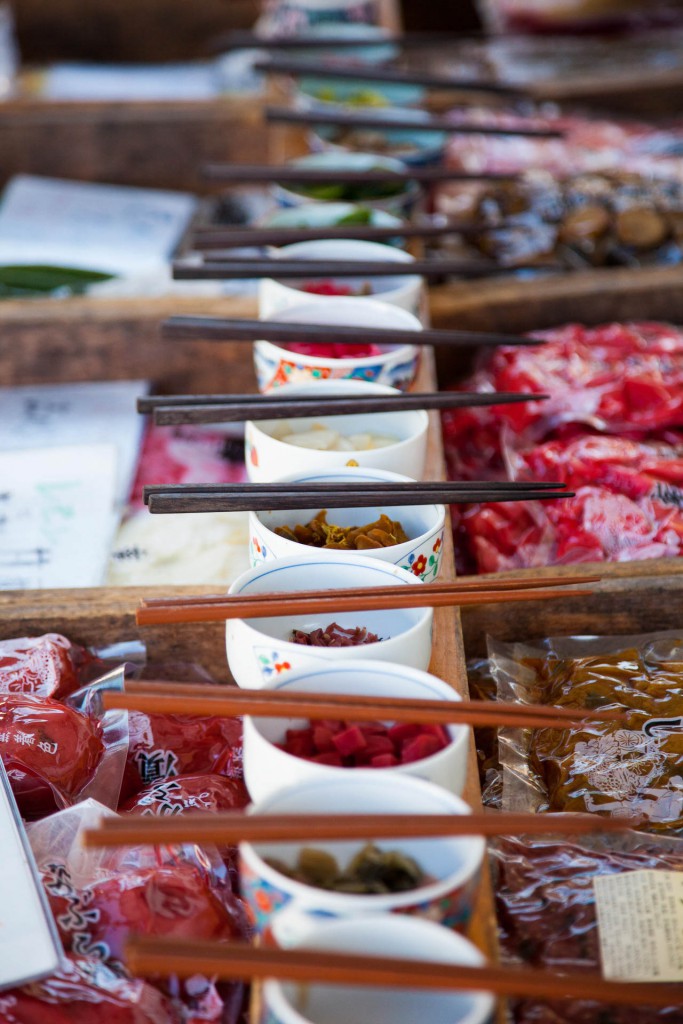 The merchants were very generous with samples, so it was a  good place to snack on pickled veggies and rice crackers.

Ryokan and our experience

It was our first time staying in a ryokan and we were treated to such warm hospitality and truly felt like royalty. A stay at Ryokan should definitely be on everyone’s list – even if only for one night. It gives you a chance to experience Japanese culture, hospitality, and cuisine at its best.

A ryokan  is a traditional Japanese inn that is quite similar to the Western B&B. This style of accommodation dates back to the Edo period that stretched from 1603 to 1868 when Japan was ruled by the shoguns of the Tokugawa family. Back then, ryokans served travellers along Japan’s highways. These days, you will find ryokans mostly in scenic areas outside of the big cities and away from their skyscrapers and neon lights. They are especially popular in areas that feature onsen or natural hot springs.

The ryokan was started by Eroki san’s father 42 years ago. It is 2015 Travelers’ Choice by Tripadvisor. Seeing the accolade it got, we had high expectations and definitely did not disappoint.  The experience we had was a surreal one. Eroki san was a souperb landlady and host. Gracious, elegant and very knowledgable. Her staff greeted us by our names and we were giving a loud “gong” welcome on arrival. 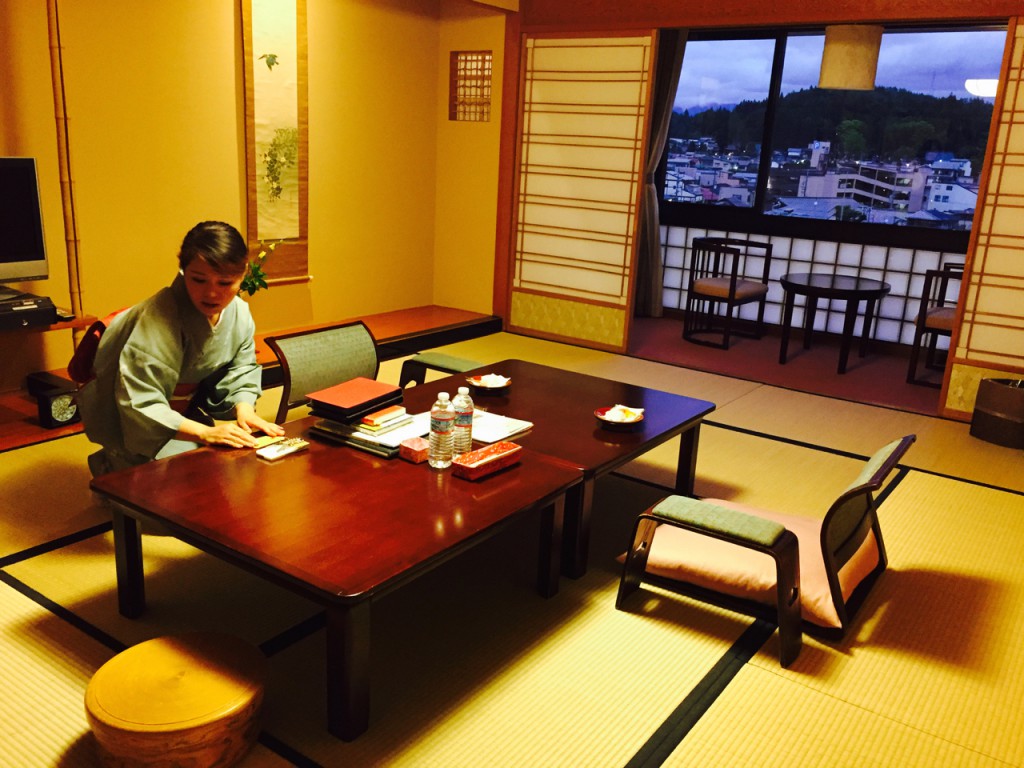 Rooms are constructed using traditional Japanese methods – this means an entrance room for changing out of our shoes and into slippers, sliding doors, which are called fusuma in Japanese, a tea table and set, and of course, tatami flooring with a futon bed. To ensure that we remain comfortable, we changed into a yukata, a traditional Japanese robe.

When we went out for our dinner in a private room, the staff came and lay out the futon bed for us. Indeed we felt like royalty.

Ethics of bathing in an onsen

This is my first time in an onsen too. I was lucky I had my hosts with me and they brought me to the onsen and shared with the dos and donts.Indeed it was a mind blowing experience when I was explained what each of the steps are.

In the Ryokan, bathing areas are communal (male and female separate) and consist of a handful of showers – to be taken while seated on the stool provided – and a hot bathing pool. You have to shower before you go in the bathtub, and even showering takes on a completely new definition. You are actually cleansing your body, making it as pure as possible, getting rid of all the daily bad energies. You sit on tiny stool, and start washing yourself, while looking at the mirror, making sure you don’t miss a spot, while a small wood bucket is filled with water. When you finish, you get the bucket and empty it above your head, repeating the process until you are ready, and soap free to get yourself in the bathtub filled with very hot water, and relax. 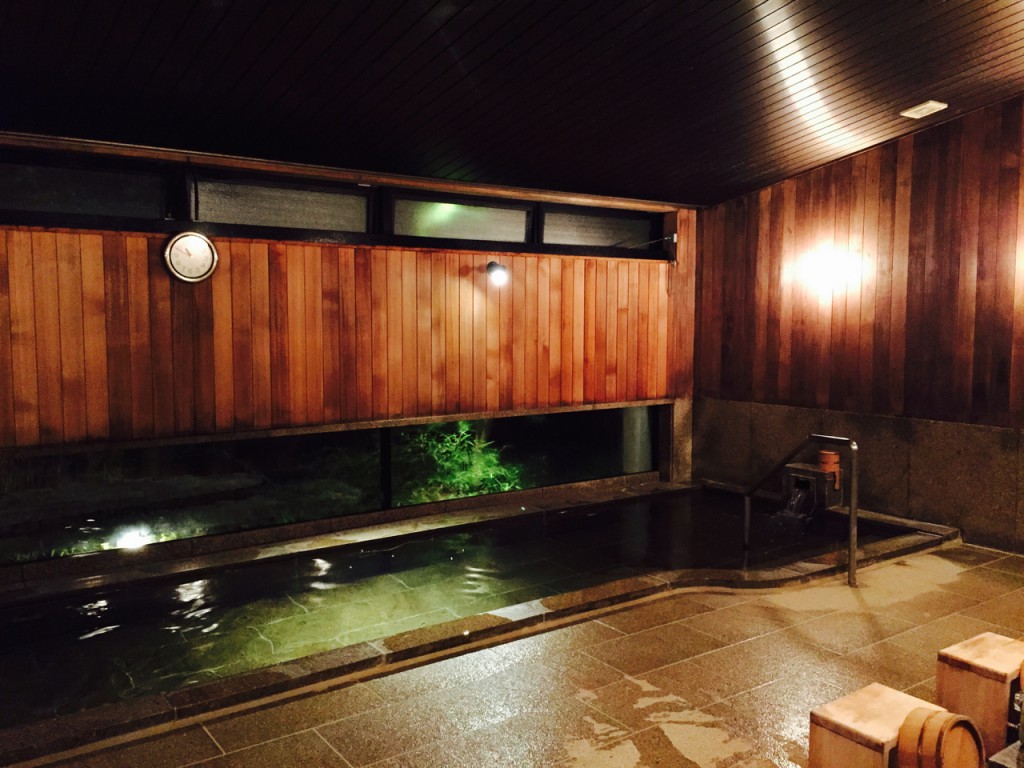 In most ryokans, these hot baths are fed by a local onsen. Most ryokan feature a variety of both indoor and outdoor baths, which are communal and separated by gender. No bathing suit allowed here. And you are not allowed to bring a towel into the hot bath. But you are allowed to wrap a towel over your head or place it over your face. As can be seen here, the tiny stool to sit on while taking a shower.

For dinner, we had an elaborate meal  known as kaiseki ryōri, and it features multiple courses prepared in a variety of cooking methods. Food meets art in this traditional Japanese meal, as our chef did his best to balance the appearance, taste, texture, and color of the various dishes. 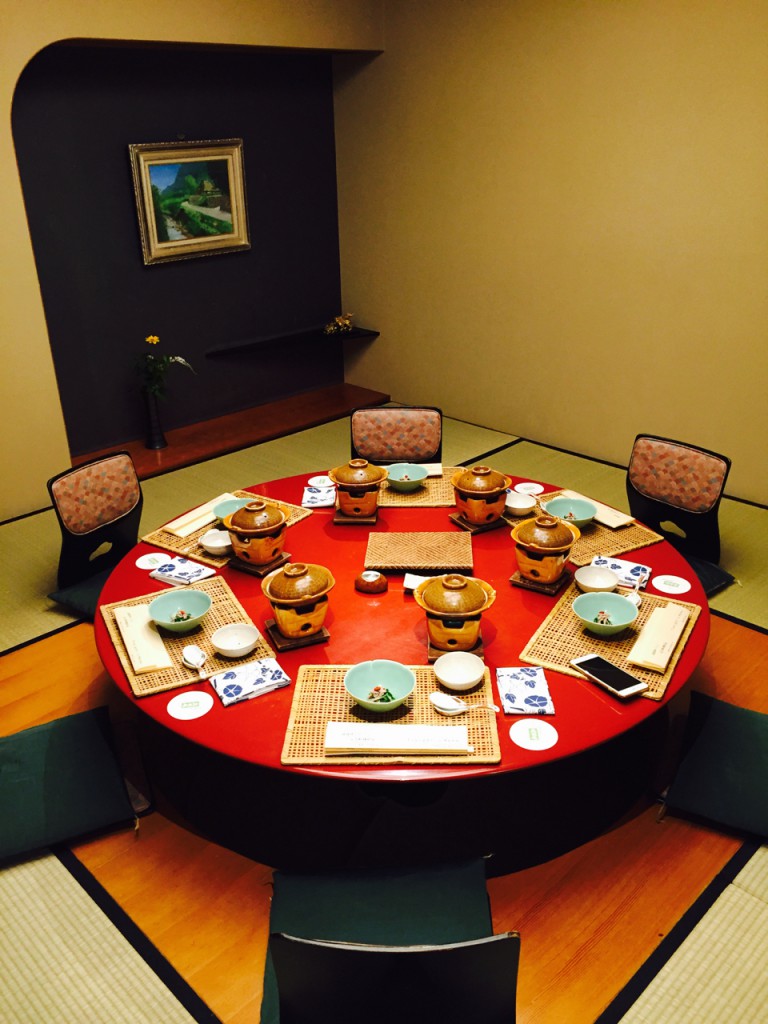 Our private dining room all set.

The theme for our dinner was Hida beef, multiple courses featuring it in different manner to showcase its versatility from appetizers, to salads, to hot pots and grills. Hida beef is Takayama’s Kobe beef. This is beef from Japanese Black cattle raised to over 14 months of age within Gifu Prefecture and graded by the Japan Meat Grading Association with the yield rate class of A/B meat quality with grades from 5-3.

They say breakfast is the most important meal of the day, and the folks who run ryokans take that very seriously, as they serve up a multi-course morning meal full of local and seasonal specialties. We were treated to a feast fit for an Emperor – salad, homemade tofu, eggs, seasonal veggies, an assortment of pickles, grilled river fish, and the obligatory bowls of rice or porridge and miso soup. All washed down with a good pot of tea. 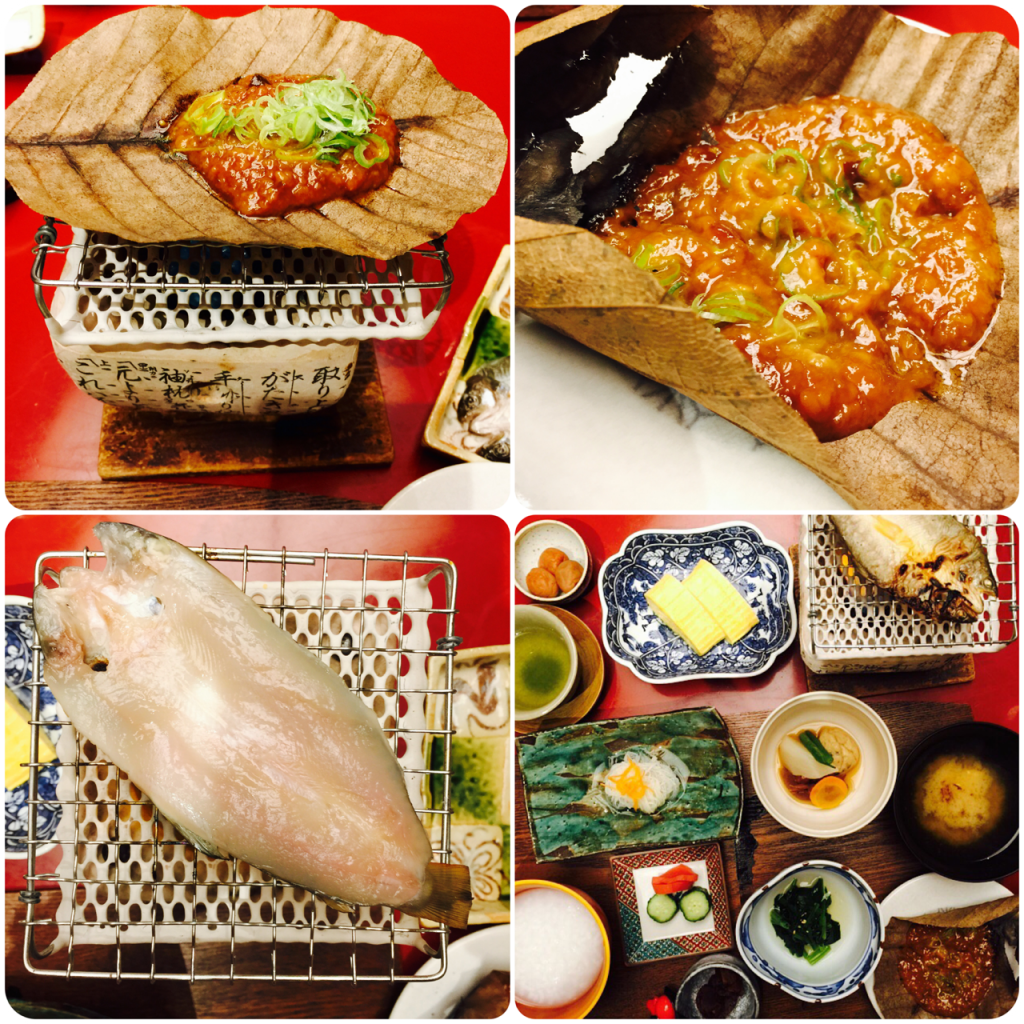 Hoba miso is a regional favorite – food seasoned with fermented soybean paste and grilled on magnolia leaves. Fallen leaves (dead leaves) from the magnolia tree are spread with miso and condiments such as green onions, leeks, edible wild plants and mushrooms such as shiitake and cooked over a clay stove (as seen below) know as shichirin. It is a local Hida regional dish that is eaten on top of rice. The reason why miso is eaten this way is because the water in Takayama area is hard, so it is unfit for miso soup. Instead of miso soup, the locals enjoy miso in another way, cooking miso without water and have it broiled. 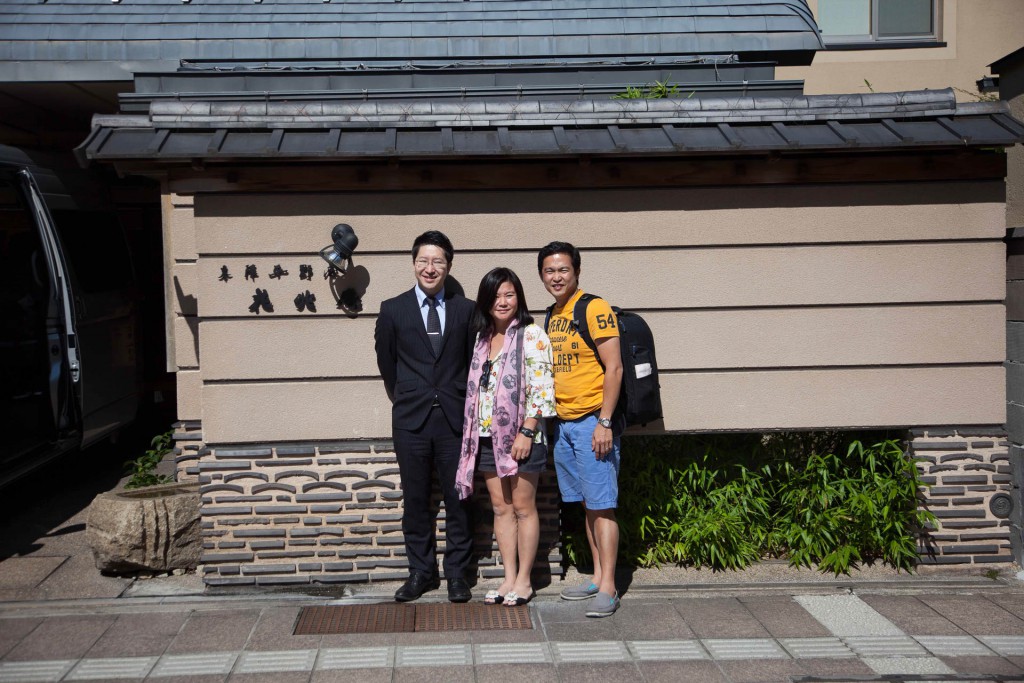 Eroki san’s son is a master of sake and today he runs the Funasaka Sake who makes one of the best sake in Takayama.

Till we meet again, Takayama!