Brazil boasts of an impressive, syncretic host of ingredients and cuisines. Flavours are heavily influenced by regions and seasons, and like much of the world, these flavours have evolved much over the past decade and her culinary variety can make even the most jaded of travellers perk up in anticipation.

As a food establishment, we are particularly fascinated by the ingredients each country has to offer and actively seek them out in our travels. Brazil certainly serves up an avalanche of nature’s blessings to support her gastronomy! Come follow us in our ingredients’ trail here. Trust us, Brazil is much more than her famed meat! 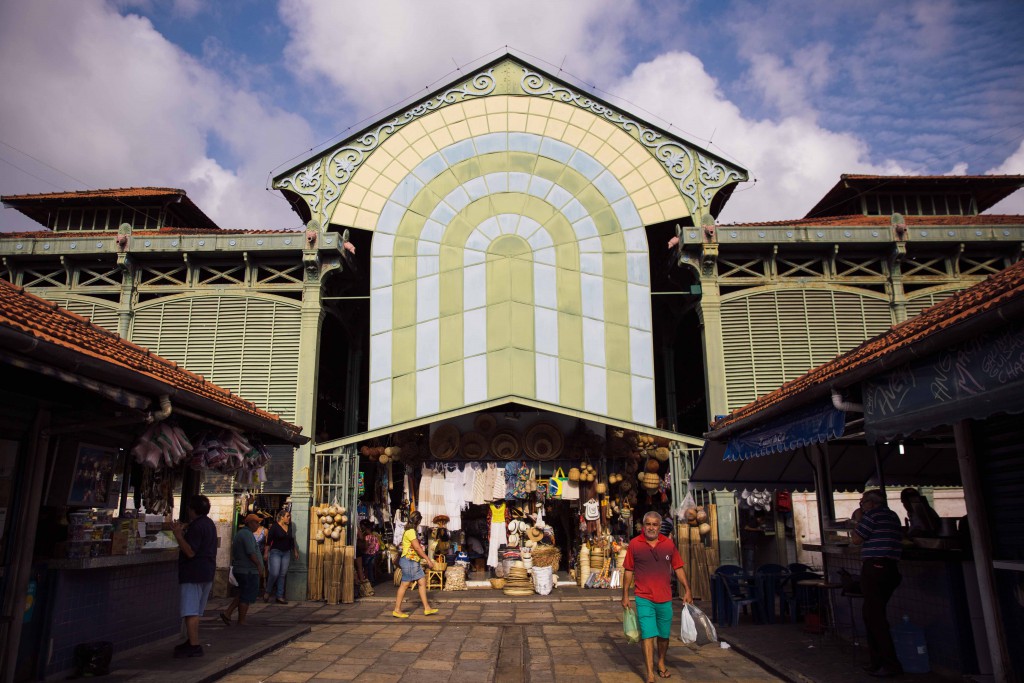 Mercado de São José, a public market in Recife, is the oldest Brazilian building constructed of pre- manufactured iron, presumably inspired by old French gates. A well-known historic heritage site, stepping into the facade of the market is quite an experience in itself. We were told that because of the fame this market enjoys from tourists and locals alike, petty crime is common here, and I was advised gently by a kindly vendor to remove the necklace I was wearing and guard it well in my bag. Beyond this initial mild trepidation, shopping in the market and the surrounding streets was thoroughly enjoyable, especially if you’d like to see the produce that the locals cook with at home.

Our hosts mused that markets are catching on the health fads and superfoods like quinoa and assorted nuts and seeds are increasingly common. Even as a heritage site, Mercado de São José has seen countless iterations to adapt to the changing needs of the consumers.

Caju or more commonly known to us as cashew apple!

Our best find on our ingredients trail? This beautiful caju or cashew apple! While non-Brazilians will be familiar with the cashew nut and its incarnations as nut butter and nut milk, it is primarily in Brazil where the cashew apple shines. The juice (suco de caju) is moderately sweet and smooth, with a little tannic aftertaste, possibly the best drink we have ever had in my life! Cashew apple juice is high in Vitamin C and other micro-nutrients, but as the skin of the cashew apple is paper-thin, the fruit is not suitable for export or even for transportation to non-cashew growing regions within Brazil. We are still dreaming about the juice, no kidding!

While Brazilian cuisine varies from region to region, grilled meats are a staple of Brazilian gastronomy, so meat-lovers are certainly going to be pleased at the selections in the markets. Sadia supplies much of the meat to stalls big and small, both fresh and processed, a testament to its significant contribution to the food culture in the whole of Brazil. Fresh and good quality meat like this makes all the difference to a grand meal. All you need then is a generous dredging of coarse salt and a roaring open fire to serve up a most satisfying meal. We weren’t too hot about the offals on sale in the markets, but these make easy fillers in soups or as complements to the mains in grills, and remain popular amongst the locals.

Vaccination point within the market.

Given the frequent use of the neighbourhood markets by the locals, the health authorities use these spots strategically to reach out to the citizens. Free flu vaccinations were offered over the weekend for elderly at a non-descript neighbourhood market we visited! We also love how the lemons were hung along chains over us, instead of in the usual piles in baskets or crates. You can almost pretend you were plucking them fresh off lemon trees, soaking in the lemon scent! 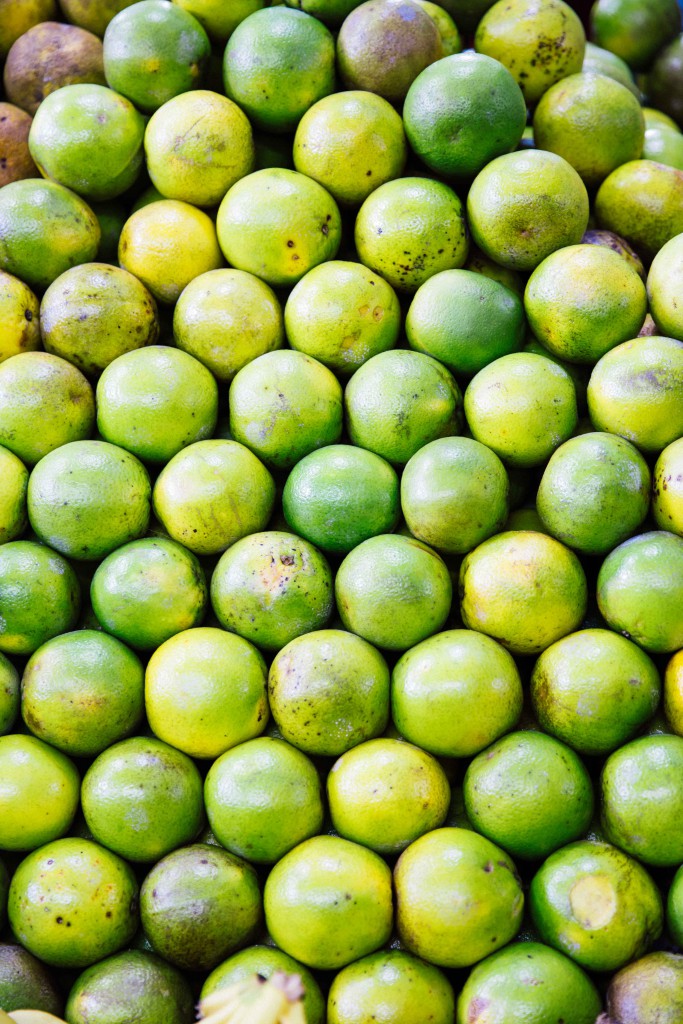 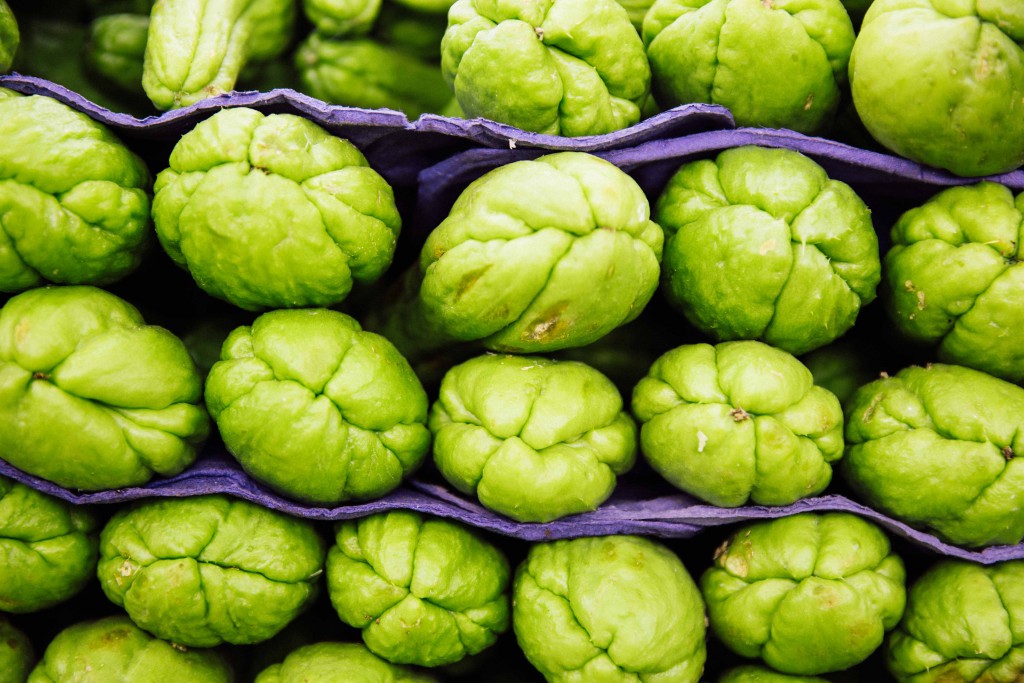 Other tropical fruits are aplenty and fresh juices are staples in all parts of Brazil. Mangos, oranges, watermelons, bananas, pineapples, passionfruits and papayas are wildly popular and readily available, while Amazonian fruits of the north like açaí are found mainly in the growing regions.

Many of these fruit stalls remind us of the wet markets back home in Singapore, even the friendly banter between the shoppers and the vendors. That home-away-from-home feeling found us every now and then, and we couldn’t help but be thankful – that food, even in its simplest, rawest, unadulterated form, connects. 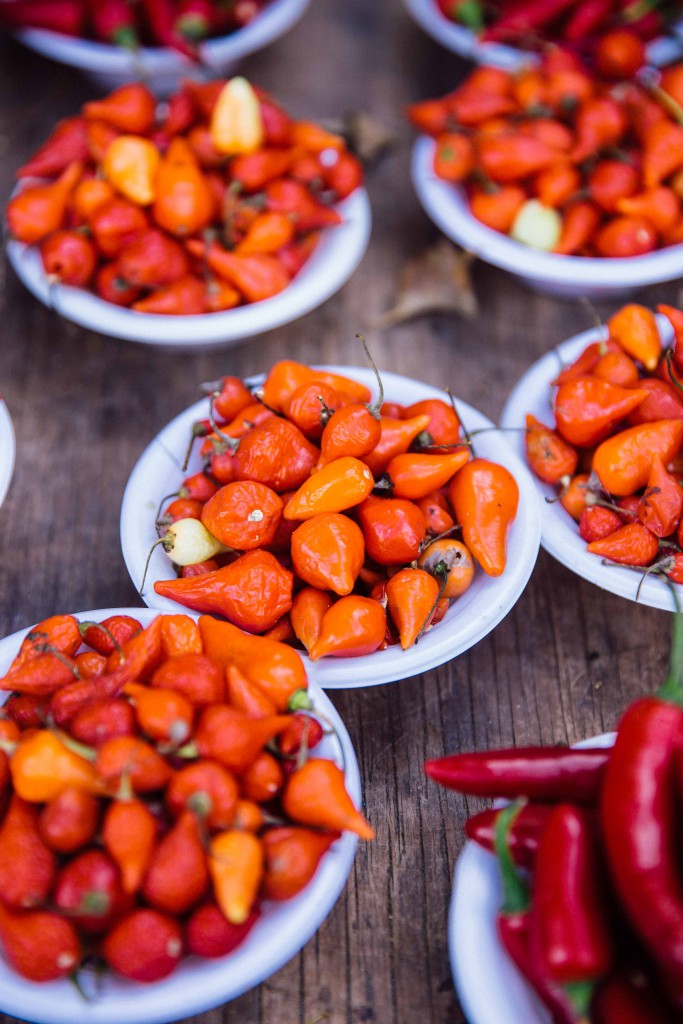 Condiments and spices form another stronghold in all markets, not at all surprising given the significance Brazilians place on their dining experiences. These biquinho (pronouced as bee- KEE-nyo) caught our eye! They are affectionately known as little beak peppers and these teardrop-shaped gems are milder than what their bright hues suggest. Like capsicum and other members of this species, beak peppers aren’t spicy and have a distinctive mildly smoky profile. Used in marinades and sauces, they can taste even sweetish and fruity. Their good looks also mean they make easy and pretty garnishes for salads and barbecues. Quite the versatile ingredient, won’t you agree?

Dried herbs and scents for baths and incenses.

The dried food segments of the markets are comparably smaller, and we learned that much of these dried items aren’t even used for food. Rather, they are important ingredients for making scents and incenses, while some spices and herbs are used for bathing. In the markets, particularly the bigger ones like Mercado de São José, we spotted many shops set up by immigrant Chinese, mainly for whole- sale distributorship. Shoes, toys, clothes, bags and various household items go for cheap here, and have become hot spots for merchants across the nation. Even if you aren’t going for bulk purchases, these are good stops to make for fuss-free shopping and replenishment of travel supplies.

One of the many friendly vendors we met in the markets!

We are fortunate to have hosts arranged for us throughout our travel in Brazil, so communication was never an issue. But even if you are travelling on your own, food is really a common language that everyone speaks. Vendors are eager to share and introduce the produce and in most markets, particularly the ones in Recife, there are explanatory signages in Portuguese and English. As tourists, this is a very welcoming gesture! With its renowned fame as the Venice of Brazil and the Amsterdam of South America, Recife stands out as a major tourist attraction in the north-east region of Brazil, mainly for its beaches and for its historic sites. It is in Recife that you can immerse in Brazil’s colourful past that has developed its unique identity today as one of the most racially mixed societies. Do visit Olinda, a city in Pernambuco that is listed as a World Heritage Site by UNESCO.

Signages in Portuguese and English in Olinda.

Once you are done with the markets, head on to the eateries that trim the surrounding streets and taste for yourself the magic the locals make with these food ingredients. At Bragantino Bar E Restaurante at Crossroads Market, we made a quick pitstop to rest and refuel, and more surprises awaited.

Bragantino has been serving traditional local food with Portu- guese roots for the past 50 years. We thoroughly enjoyed the caldinho, a typical soup made from black beans in Pernambuco, the north-east region of Brazil. Unlike its more well-known black bean counterpart, the feijoada, caldinho is made with puréed black beans for a thicker and more consistent texture. This is typically eaten at the beach, and on colder wintry days, beach-goers flank vendors for this hot soup.

Like many of the other Brazilian snack food and cuisines, condiments are what make the flavours pop. You can add poached eggs, olives, jerked beef, chives, coriander and many others, though caldinho is equally delicious with just a splash of fresh lime juice.

Modest ingredients can make grand meals. With a little creativity and flexibility, you can take care of even the pickiest of eaters. Let not the glossy, fancy restaurants or culinary trends take your eye away from the basics. Because often, it’s the basics that deliver and serve up comfort.

Having spent a good amount of time understanding how the chickens are reared and cared for at the BRF plant and chicken farm, we were particularly attentive to each chicken dish we had the honour of eating!

The grilled chicken we had at Tio Pepe was spectacular, easily one of the best meals we’ve had! Done Portuguese style with vegetable rice on the side, this was grilled upon order, over a hot grill fire to produce that crispy skin with rustically perfect grill marks and tender inside. 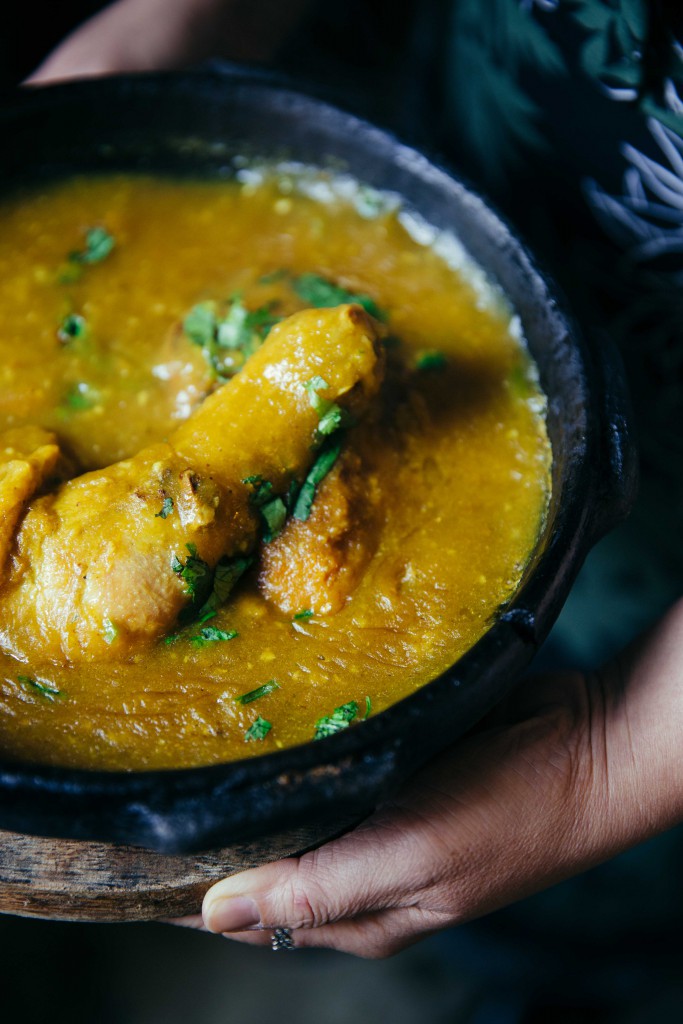 This galinha caipira (meaning rustic country-style chicken) also hit home – it reminded us so much of a thick Indonesian soto ayam! Turmeric is used to enhance the flavour of the dish, thickened with manioc (cassava/tapioca). Unlike the Indian way of cooking we are used to where turmeric is combined with other spices, turmeric is regarded as saffron from the earth and is used as a standalone spice here. The dish is so popular that apparently every family has their unique version, hence the name ‘rustic country chicken’.

And we are reminded once again – the best poultry produces the best results, and the best chef can only be when passion and love for the food and people is part of the recipe.

* This Souper Inspirations trip to Brazil is sponsored by our kind partners, Sadia Singapore, BRF and SATS-BRF (distributor of Sadia in Singapore). All opinions and photos are as always, ours.