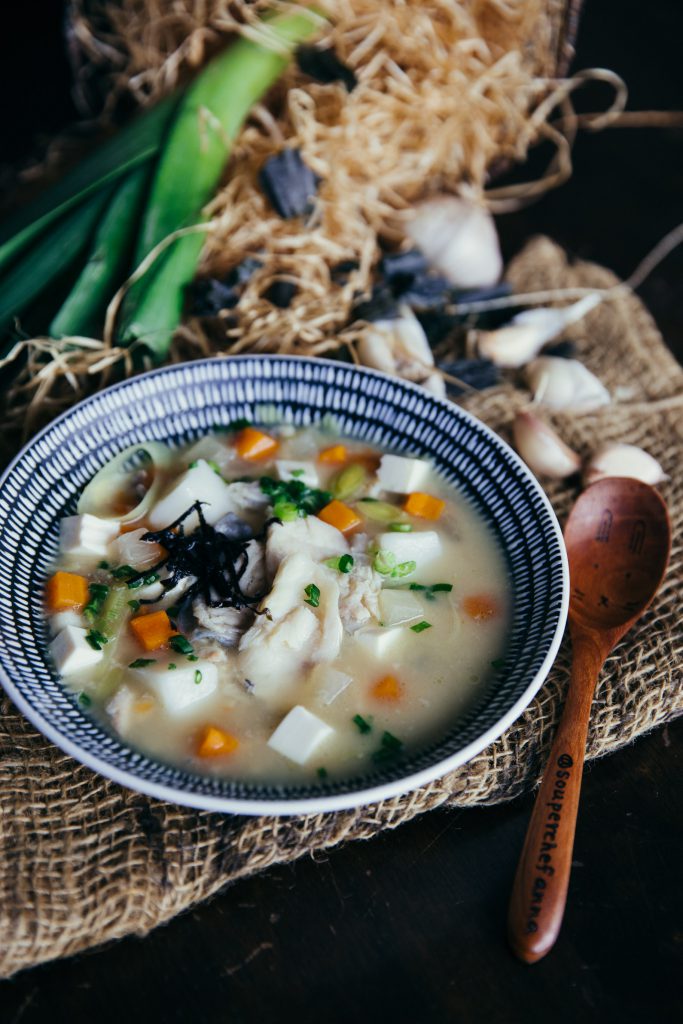 I must admit I struggled with the introduction to this. How do you put into words that absolute delight when you taste something ‘umami’? Possibly the person who discovered it says it best – it’s simply yet profoundly a “delicious taste”. Discovered in 1908 by Japanese chemist, Kikunae Ikeda, it was not until 100 years later that it was recognised globally as a flavour, a distinct flavour that some have described as “savoury yet subtle”. The essence of umami relates to the naturally occurring amino acid glutamate that lends a remarkably distinct flavour to foods, and is commonly found in meats, fish, tomatoes, as well as in fermented products like miso, soy sauce and fish sauce. The former two are undoubtedly the crowning jewels in Japanese cuisine, the flavours of Japan. There have been references that miso and rice for Japanese are like ‘meat and potatoes for Americans’. Despite how the Japanese cuisine has evolved over the recent years, rice with a dish of pickles and a bowl of miso soup remains the archetypal Japanese meal. 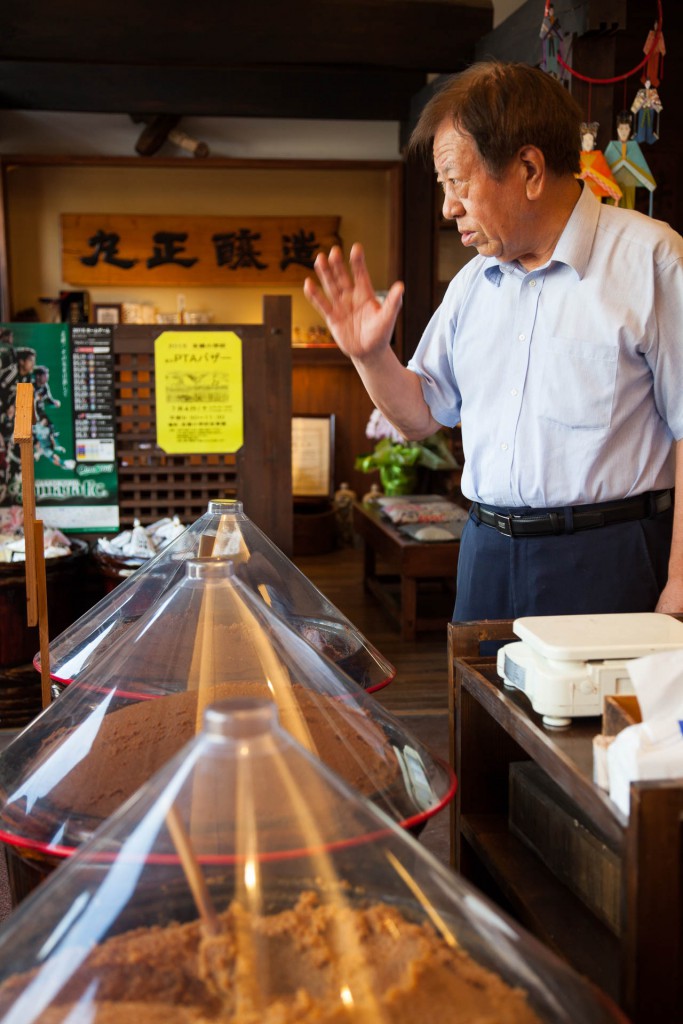 Meet Hayashi san, 2nd generation shinshu miso brewer of Marusho explaining to us about the different types of shinshu miso he sells in store, ranging from 6-8 months fermentation to one as long as 2 years old.

In Matsumoto City, we met , the president and master shinshu miso maker at Marusho Jozo. Through our conversations, I found out he is 80 years old. But the man does not look a day past 65 years old! His complexion, the tautness and most importantly, his agility climbing up the ladder to the miso barrels, was impressive to say the least. I asked him for his secret to his youth and strength – miso soup of course! Every morning, his wife would make miso soup for him for breakfast. This was enough to convince me that miso may well be the answer to longevity and souperb health!

Making miso is an art. Hundreds of varieties of this classic Japanese staple can be found across the country. Miso is created from soybeans, grain (usually rice or barley) and salt. To activate fermentation, a koji (starter) is added, usually one that includes a mould called Aspergillus oryzae.

Each miso’s fermentation and aging process involves a multitude of factors from the type of koji used, to the cooking technique and even the length of time, all resulting in variances of taste, colour and texture. Naturally-made miso can go through a cycle of fermentation and aging that lasts as long as three years. In our two trips to Japan, we visited several artisanal miso factories that produce different types of miso, namely hatcho miso, shinshu miso, gujo miso, and akita miso. 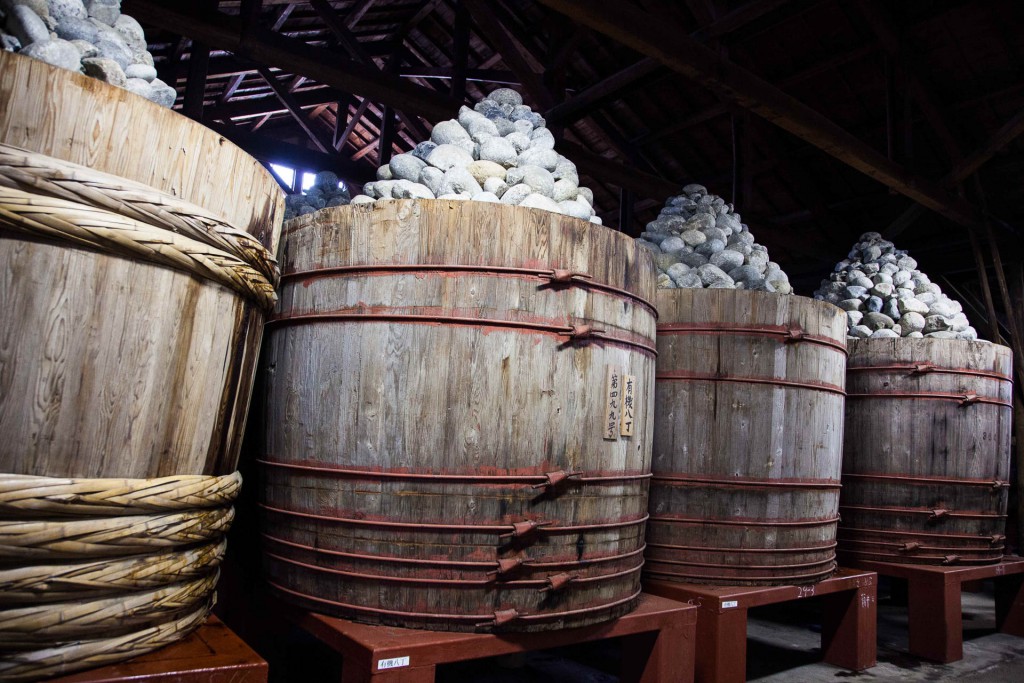 Aged buildings, with timber sides and supports, house the original Edo-period cedar wood barrels used to store the soybeans during the fermentation period; they looked like car-size replicas of grape-crushing vats, held together by bamboo strapping on the left and iron on the right. The beans ferment in these vats for almost three years in the un-airconditioned environment. Nothing is added in the way of preservatives or chemicals, they just use the identical time-honoured process.

Known for its particularly bitter, acidic and astringent flavour, hatcho miso is made by the Hatcho Miso Company in Hatcho (Eighth Street), to the west of Okazaki castle. Produced using a long-established artisan technique, hatcho miso is the rarest type of miso, comprising just 0.2% of the total volume of miso produced in Japan. With a long fermentation process, it has the most reduced water content compared to other types of miso. It is also easy to digest and is a natural food since neither food additives nor pasteurisation are used.

Produced specifically in Gujo Hachiman, gujo miso is a type of mame miso that is also known as jimiso, which means local miso, alluding to how every household that makes it has a slightly different rendition of it. However, to be classified as mame miso, it should not detract too much from using only soybeans and mame soybean malt, and the length of fermentation should be at least one year. 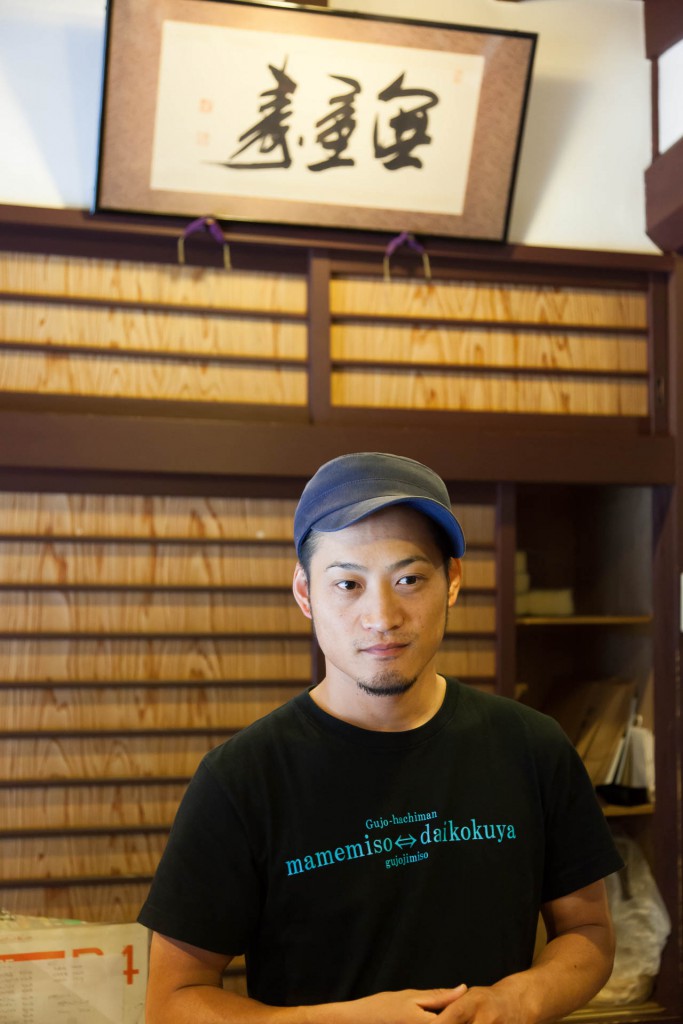 Meet 37 year old Hiroyuki san, a very unlikely looking gujo miso master, he took over the family business of making gujo miso at 25 years old. He learnt the craft of making traditional gujo miso from his grandfather who started the business 70 years ago.

Daikokuya is a family-run business that started 70 years ago in the charismatic old town of Gujo Hachiman, and is well known for its homemade miso made from local grown soybeans and fresh water. Gujo jimiso has more salt added and hence requires a longer time to reach maturity compared to shiro miso. Daikokuya ferments miso for at least 1.5 years. The colour of gujo jimiso is dark red in colour due to its prolonged fermentation process. The gujo jimiso is not blended and the whole soybeans can be seen in the miso. It actually reminded me very much of the salty “taucheo” by the Chinese known as the salty preserved soybeans!

Besides making miso, Daikokuya also brews tamari and mirin. Previously, when I was doing research on gluten-free foods, I chanced upon tamari and had assumed it is a gluten-free soy sauce with a fancy branding. On the trip, I learned tamari is actually a by-product of miso production, the liquid piled up on top of miso during fermentation. Equally umami, tamari is great to use for dipping of sashimi with characteristics of aged balsamic vinegar and complex sourish notes. 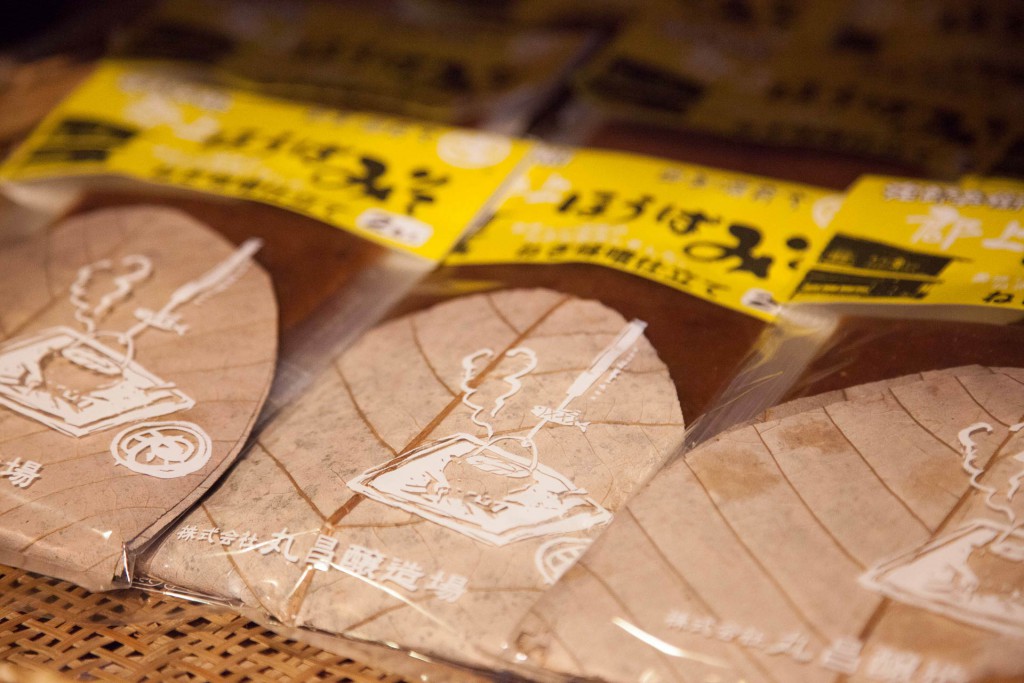 One of the most curious looking varieties, hoba miso is miso wrapped in hoba leaves, the leaves of the Japanese magnolia. The large leaves of the ho tree (a type of magnolia) have antibacterial properties, and in this area, they are used to wrap portions of sushi or mochi rice cakes. A specialty of the Takayama area, the custom originated as a way to thaw out pickles that were frozen solid in the depth of winter. Apparently, water in Takayama area is hard, so it is unfit for miso soup. Hence the locals thought of a way to enjoy miso without the soup. Chopped negi (green onion), mushrooms and wild plants are mixed and seasoned with miso on a hoba and then broiled. Miso soup here is now served in any ryokans and restaurants with the help of a water filter, but hoba miso remains a local favourite dish. 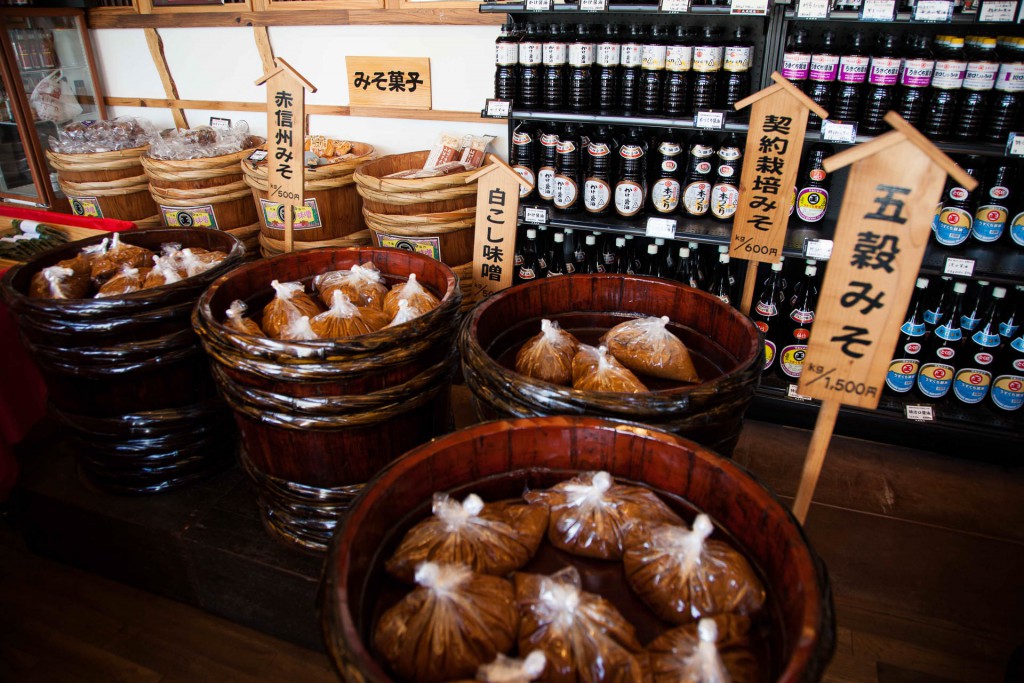 Glossy and golden yellow, this nutritious seasoning made of soybeans, malted rice and salt has been valued by locals as a source of energy since ancient times. It is a very popular variety of miso with residents from Tokyo according to our interpreter, Rie-san, compared to gujo miso and hatcho miso. Shinshu miso is a form of kome miso using rice malt rather than soybean malt. It can be however be full-bodied in taste like that of hatcho miso with a two-year fermentation process, achieving a dark red colour.

At Marusho Brewing Co., Ltd in Nagano Prefecture, Hayashi-san’s grandfather started the business 120 years ago in 1895, and since its inception, the brewery is proud to continue making shinshu miso the traditional way using carefully selected raw materials. He explained that what makes Nagano perfect for miso production was its purity of the water and air quality. Here, rice malt is mainly used for the fermentation. However, Hayashi-san innovatively used buckwheat malt mixed in with the rice malt to create new types of miso. Around his shop, you can see that his creative products of miso-filled doriyaki, miso pan (breads), miso donuts and a variety of miso-coated rice snacks and nuts. In summer, he even makes miso ice cream! 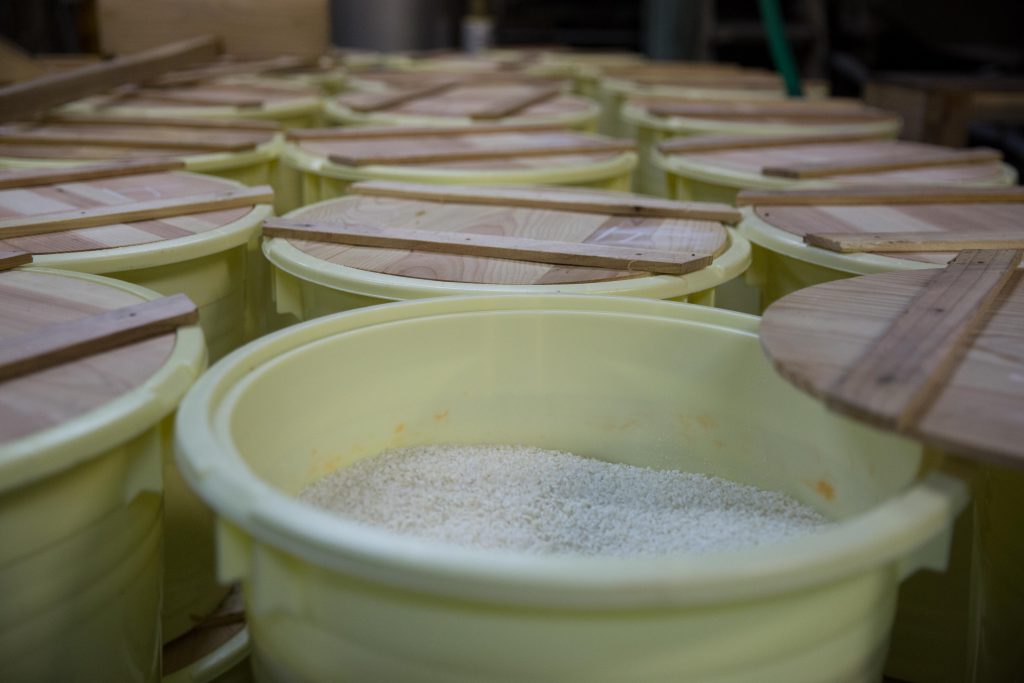 One of our biggest surprises in our learning journey on miso has to be meeting the youngest owner we have seen so far, Yusuka Ando. A Tokyo University graduate, the 31-year-old young man worked in Tokyo for five years before taking over the family business as the 8th generation owner two years ago. He shared that it was his family’s wishes for the children to hone their skills elsewhere first before they manage the miso business. 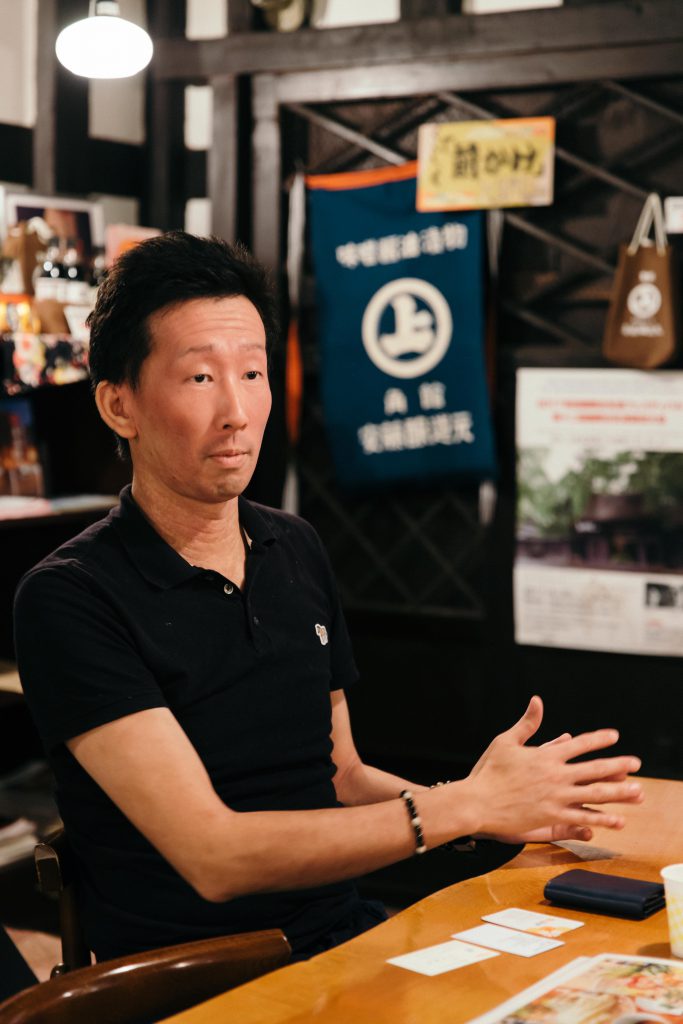 Akita miso is a kind of kome miso, made using rice malt. The end product after a fermentation process of 1-3 years in traditional wooden barrels is a red-coloured miso, one of the most popular varieties in Japan. Yusuka-san does not innovate on the production technique but is keen to    explore new ways of consuming miso and soy sauce as well as new packaging ways to cater for reduced usage in smaller families. He has produced recipe cards detailing innovative ways of enjoying soy sauce. We love his soy sauce ice cream that tasted wondrously like caramel ice cream but with a slightly salty soy sauce finish.

Yusuka-san is himself a father of two sons, 4-year-old Osuke and 1-year-old Shosuke. Following Japanese traditions, the akita miso business is likely to fall into the hands of Osuke as the first-born in his generation. Shosuke is thus often encouraged to carve his own career – “a dentist or lawyer maybe”. 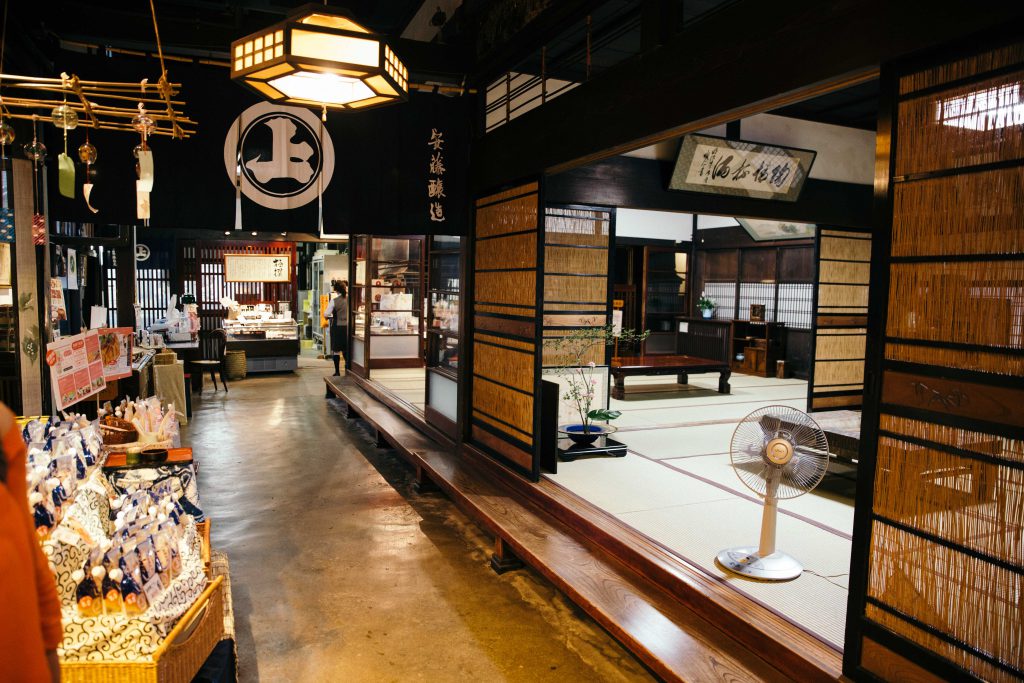 How privileged are we to learn so much from the master brewers themselves. Beyond the art of making miso, we are deeply inspired by the commitment to continuously innovate on new products to keep up with the trends. Quality miso doesn’t come cheap. And you can now see why. It’s a lifetime of work, consistency, research and innovation. The next time we take miso, let’s also take some time to savour the umami slowly and gratefully.