When I got to know that we were suppose to cover Tohuku region specifically Miyagi and Sendai, I admit I was very apprehensive. Not that long ago in 2011, the great Tsunami destroyed a great part of Tohoku and caused a nuclear meltdown of the nuclear reactors in Fukushima. The government of Japan has declared the region safe and every day, the food source is monitored and tested for radioactivity.

I am glad we went. It was a humbling experience when we saw first hand after 4 years, how the people picked themselves up, to rebuild their lives, their homes, their communities. Some of the places that were completely engulfed and demolished are still in a state of restoration. I heard first hand accounts from business owners who had their factories destroyed, swept out to sea, many lives lost. They have so much tenacity and pride how they emerged from the disaster stronger. I can’t help but admire the strength of the human spirit. There was not an ounce of complaint or bitterness in time. The places near the coast were the most hit, especially the city of Ishinomaki where a lot of people, many who are in the fishing industry, lost their lives and still many are declared missing and unaccounted for.

Here is a collection of some of the places we went in Tohoku: 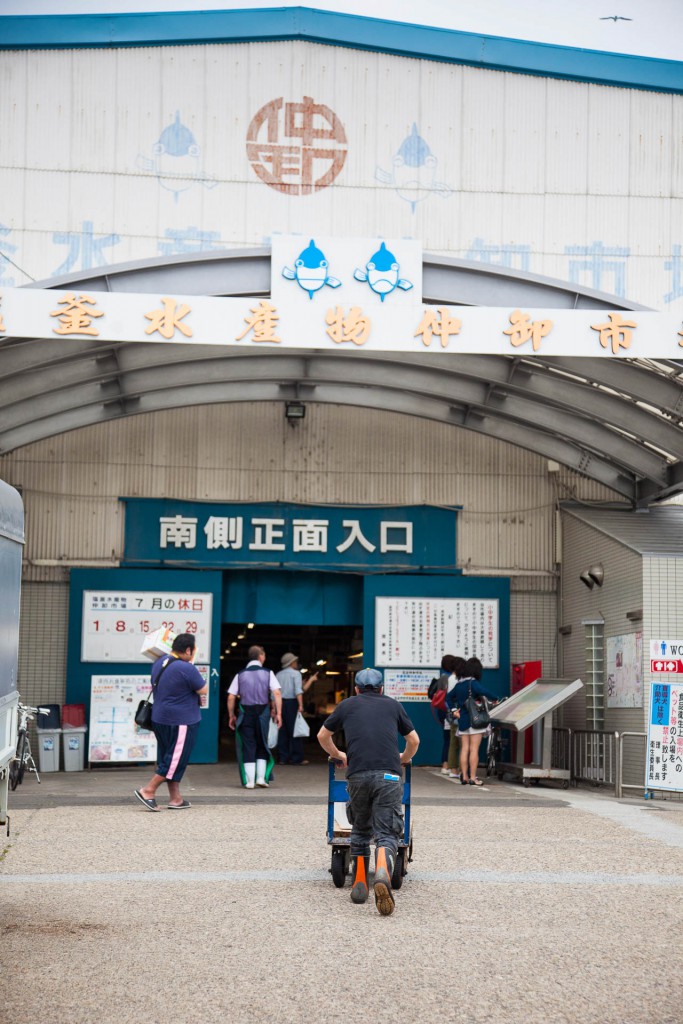 Shiogama Seafood Market: Every year, during the strawberry season, Thai tours flock here to enjoy the fresh seafood and strawberries in March to April. Everything here feels very reasonably priced. Shiogama also has the highest density of sushi restaurants in Japan, specialising in raw tuna (Maguro). 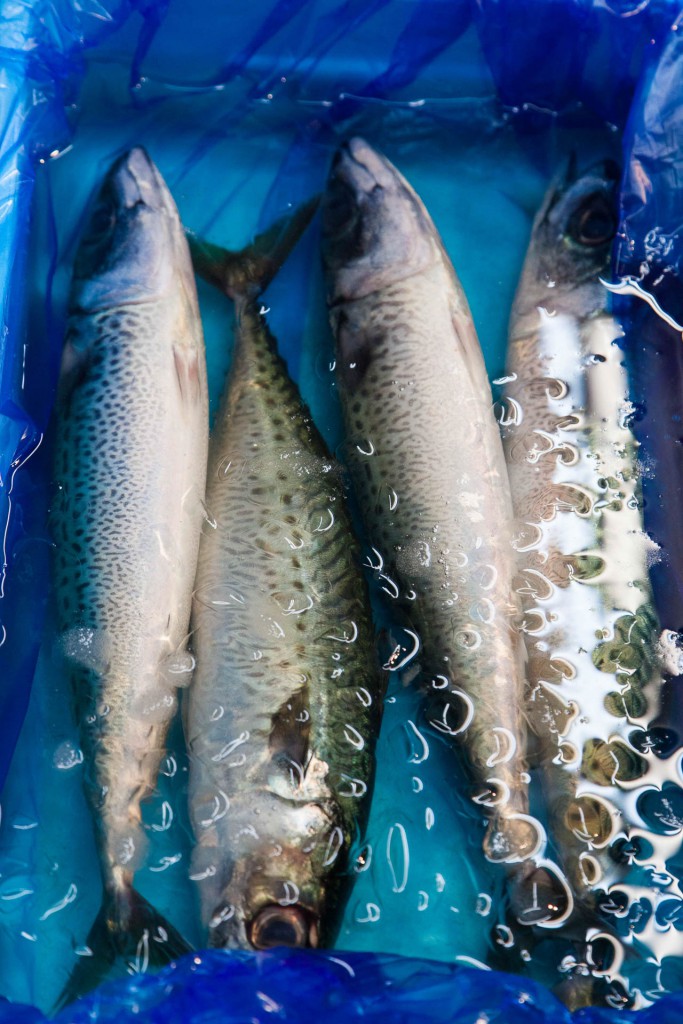 At the Shiogama Seafood Market, fresh tuna comes in boats everyday instead of frozen. 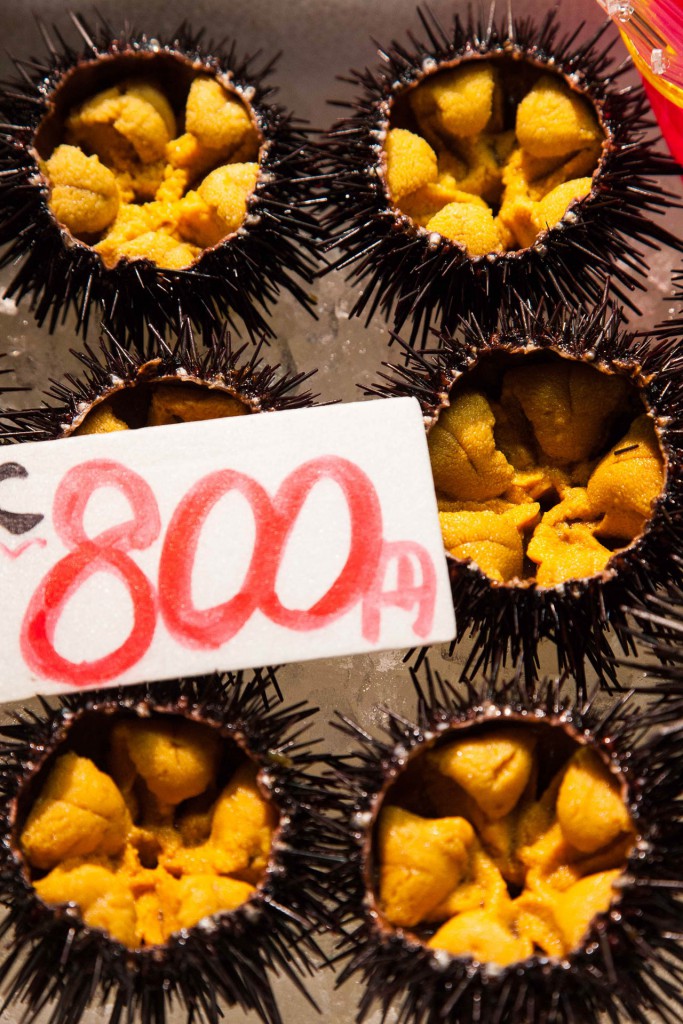 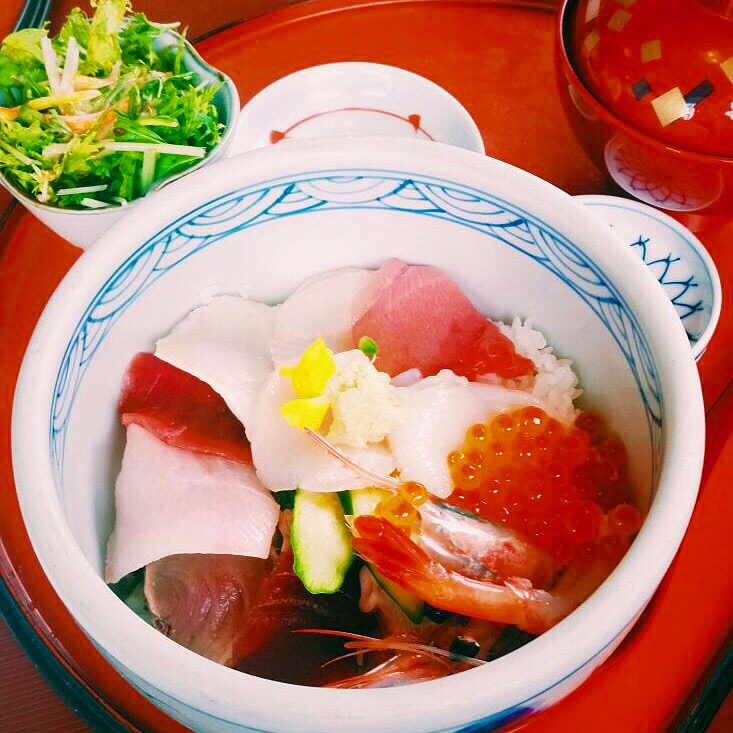 A beautiful dish of the freshest raw fish served over rice

Takeshi san, the Executive Director shared his story of what happened on that faithful day in March 2011. His factory is actually located in Miyagi along the coast of Shiogama, one of the worst hit areas. They were able to clean up the factory quickly with the help of the residents. Everyone chipped in to get the business back in operations. He shared how he is so grateful and is paying it forward. They came up with new products to use octopus and source only locally from the fishermen around the factory. He wanted to help the fishermen and work with them so they can rebuild their lives. I was very touched with with how the Japanese people has such a strong sense of community. 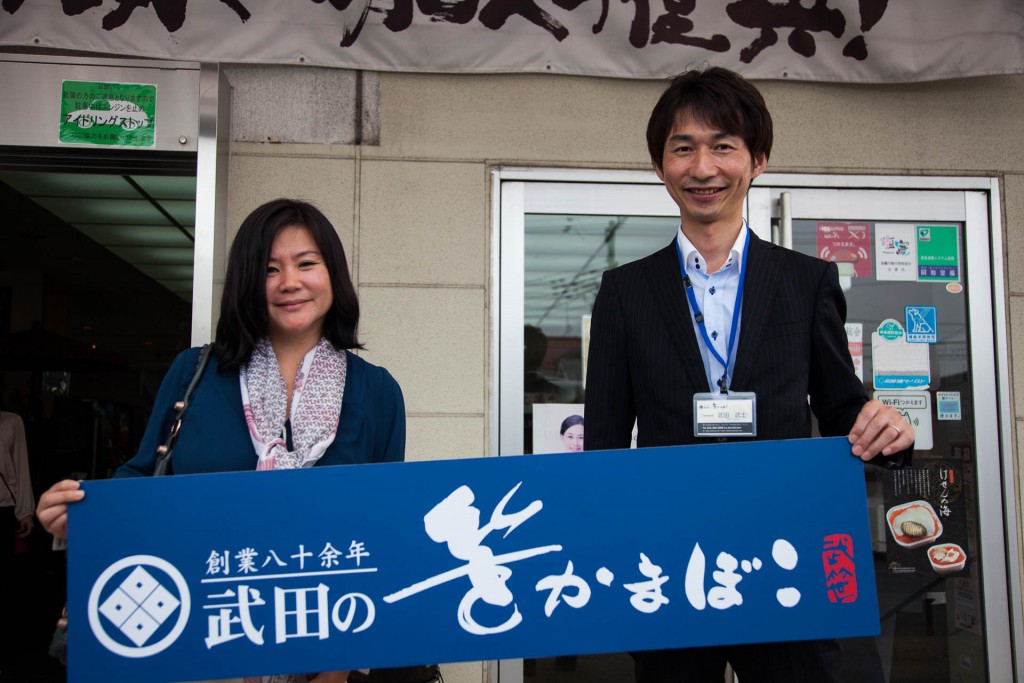 Takeshi san is the Executive Director at Takeda Sasa-kamakobo, a business making this popular snack gift selling something that we would call as fish cake, premium fish cake 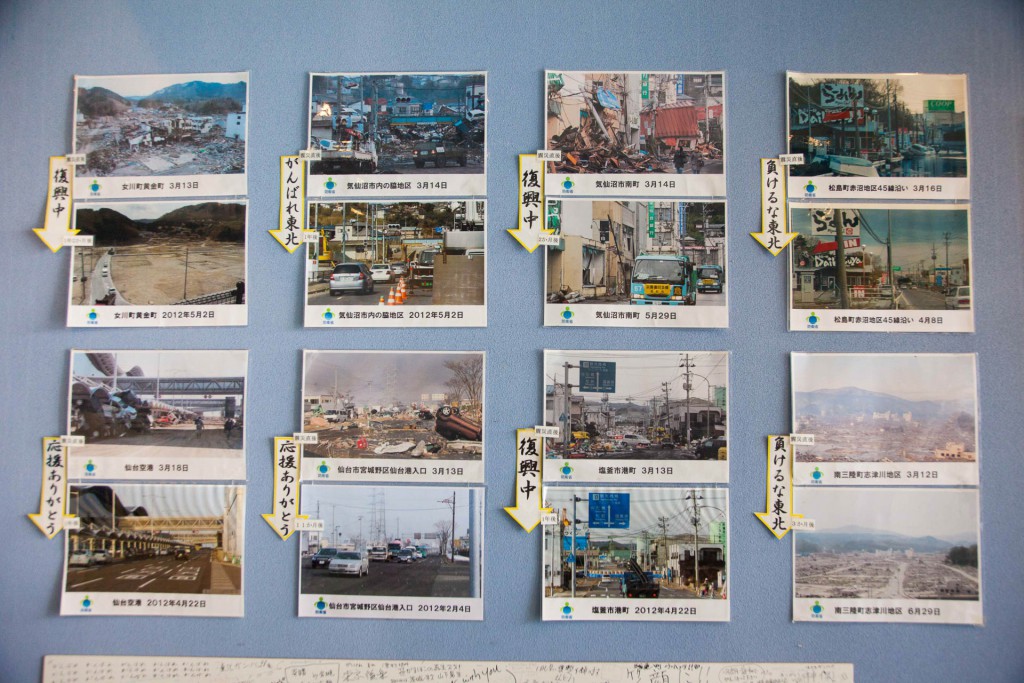 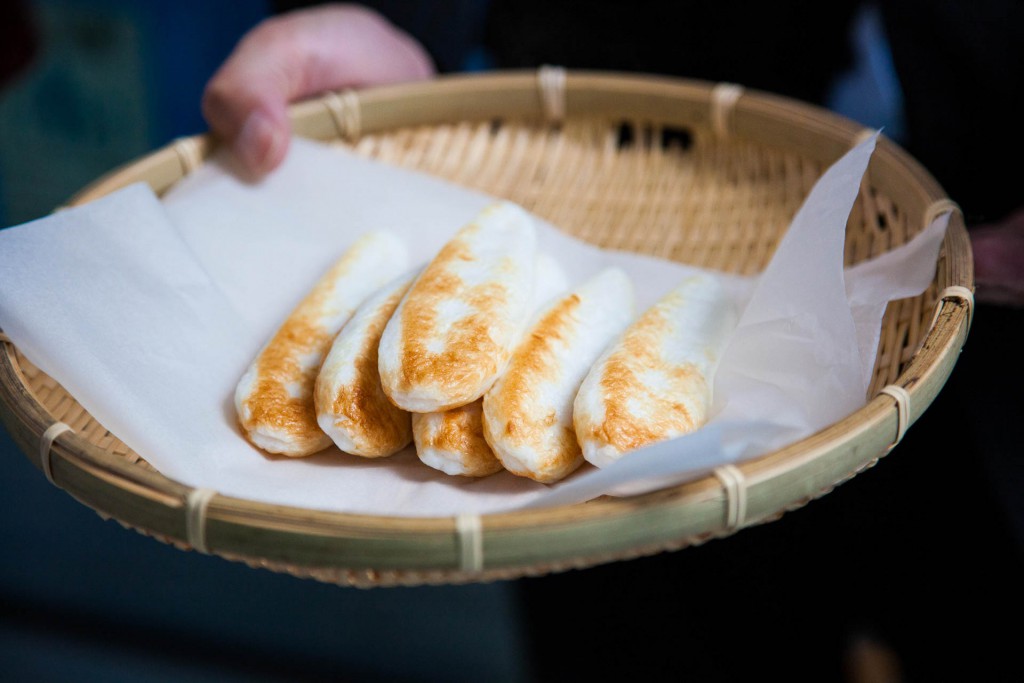 Premium Sasakamaboko. These fish cakes are shaped like bamboo leaves. A piece sold here is 154 yen. In the supermarket, one can buy 8 pieces for 198 yen. Takeshi san takes pride in what he does, and uses good quality fish. He is very innovative and have flavours such as mentaiko, yuzu and even gyutan (beef tongue) .

Ryuichiro san, is the CEO of Yamatoku that processes saba caught and brought into the port of Ishinomaki. Ishinomaki is one of the worst hit area. I could see why. They are really just next to the big open sea, unsheltered. Whole buildings were destroyed and today if you visit, all the buildings are spanking new. All his equipment for processing fish were all destroyed. Thankfully, the government had played a part in helping businesses like Ryuichiro’s through special assistance funds to buy machineries and rebuild the factory. 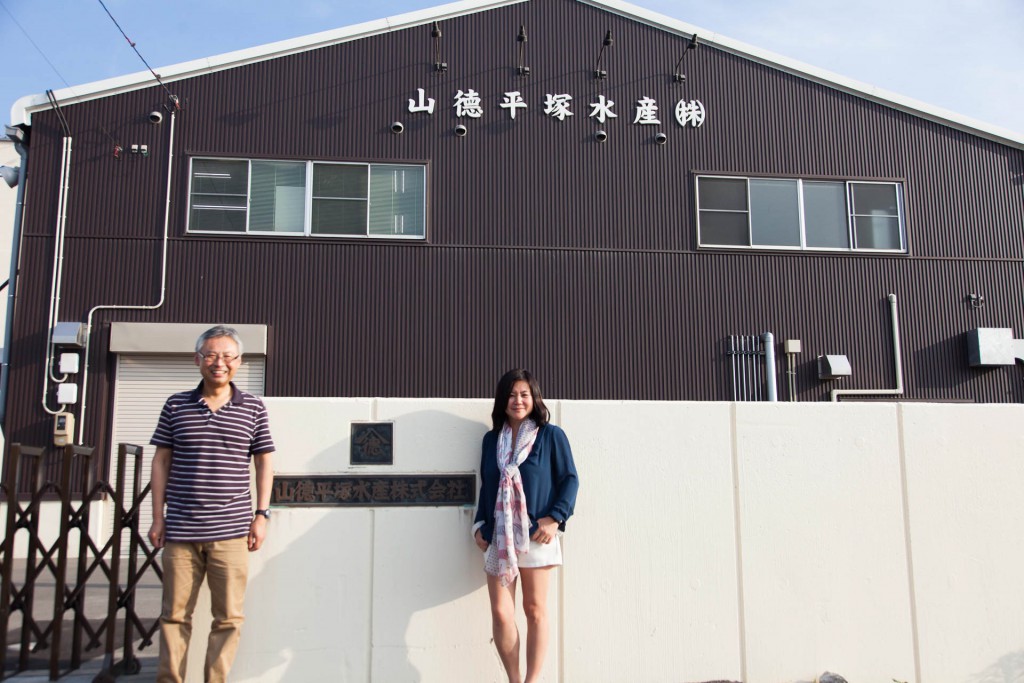 Standing proud outside his newly built factory, Ryuichiro san shared how the water engulfed the 2nd storey of his original factory, 14 m high. At that time, there was 35 people working in his factory and it was blessing that all survived. 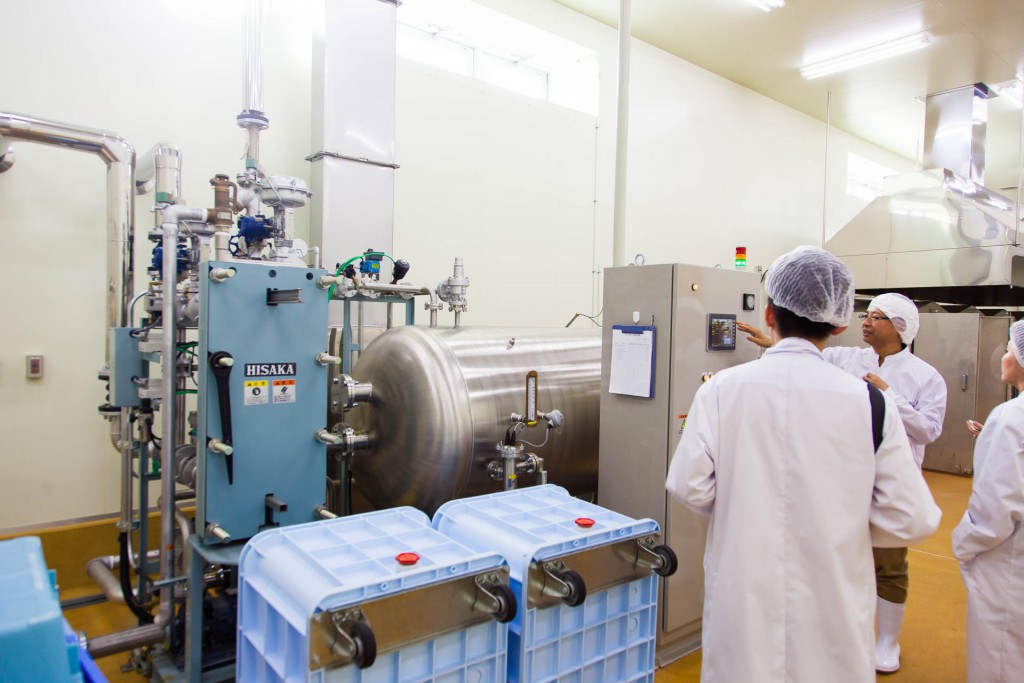 Factory premises of Yamatoku with new state of the art equipment 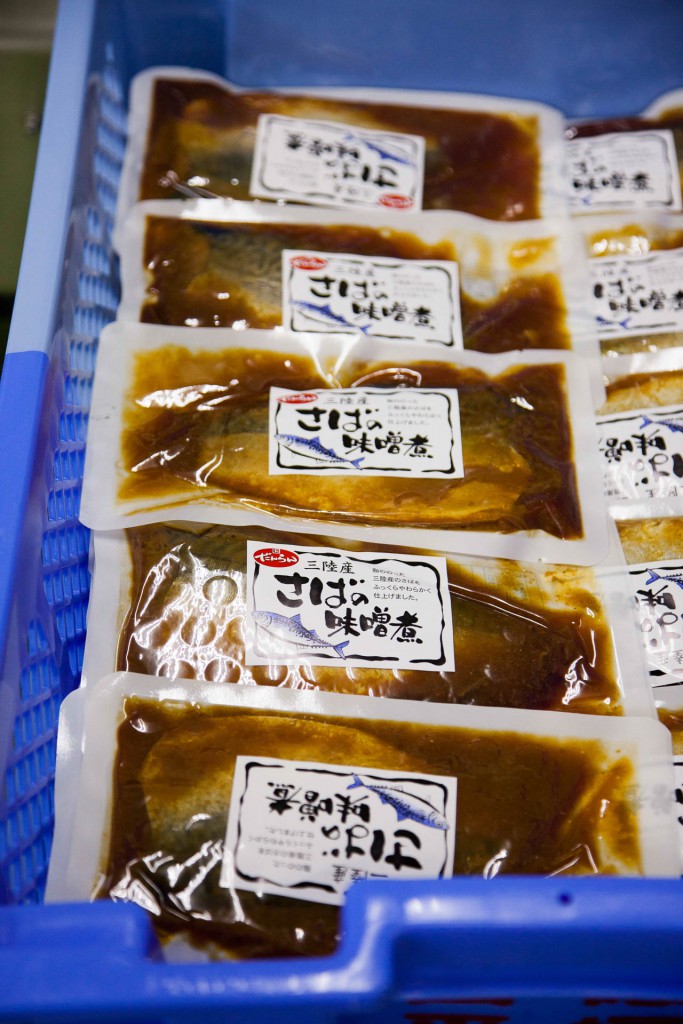 We also had some wonderful food experiences in Sendai. Some highlights below :

I have learnt from the chef at Dateno Gyutan that Gyutan has its origins in postwar Japan. Keishiro Sano, a yakiniku (grilled meat) restaurant owner, figured he could save money and make a new type of cuisine in the process by using the cow tongues and tails discarded by US occupation forces. The result, of course, was gyutan. He opened up Aji Tasuke to sell his new creation in 1948. The citizens of Sendai also thought it was a strange food at first, but they tried it and quickly got hooked. 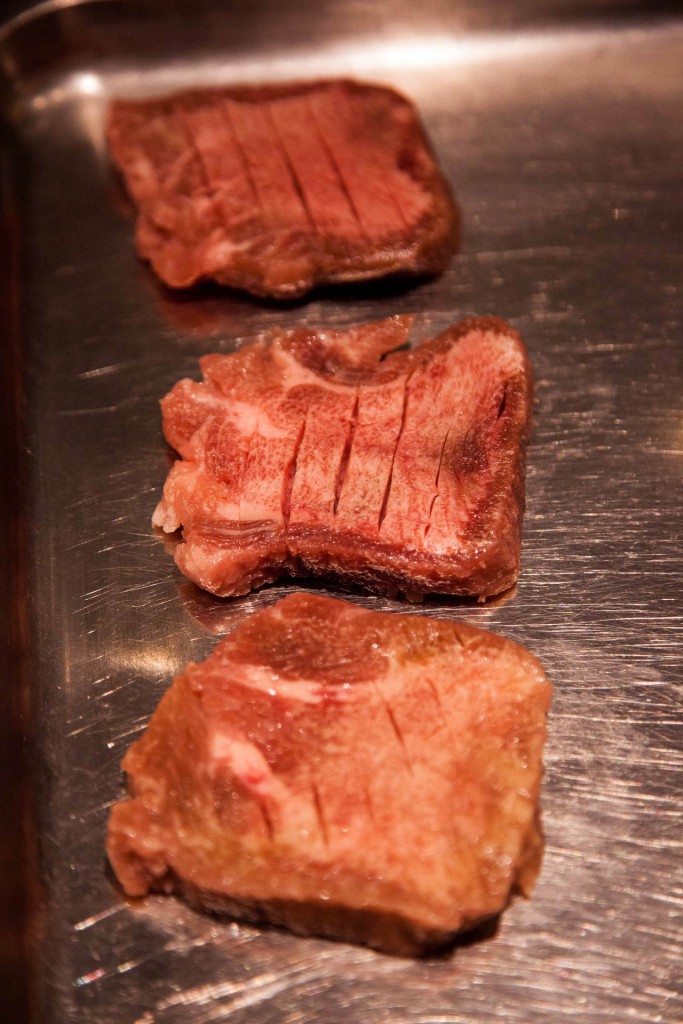 In Sendai, Tohoku region, it is a speciality. There are at least 10 restaurants selling gyutan at the train station and there is actually a Gyutan street called Gyutan Dori in Sendai showing how popular this delicacy is.

They use a special part of the tongue that is hidden inside the throat area and a special technique to draw the blood out so the tongue will not have the bloody taste. 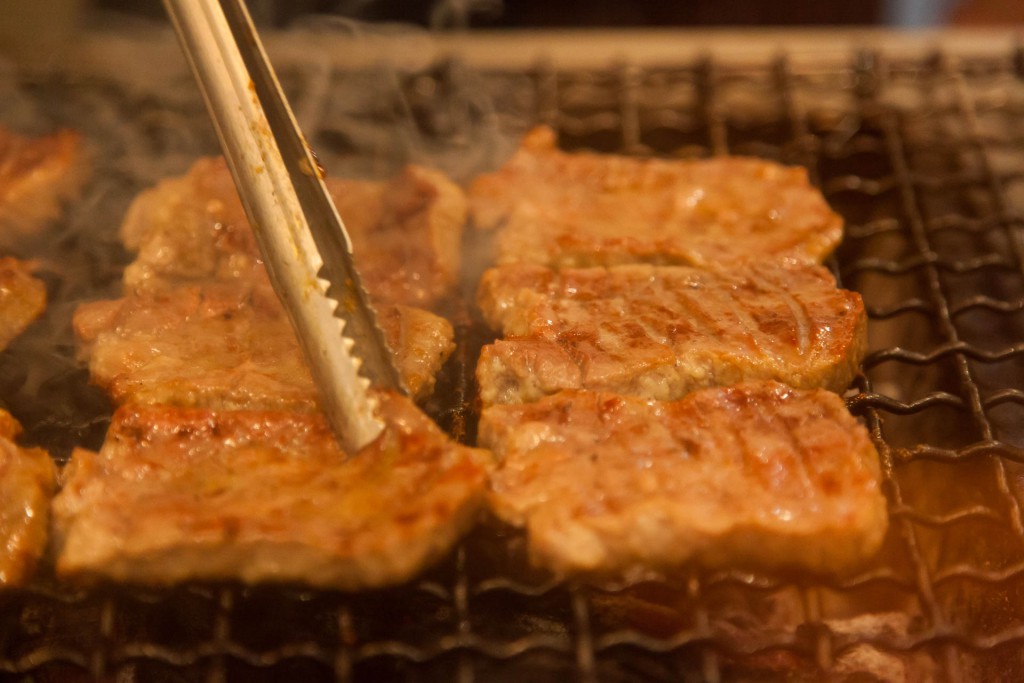 Typically, it is lightly salted and grilled on charcoal. 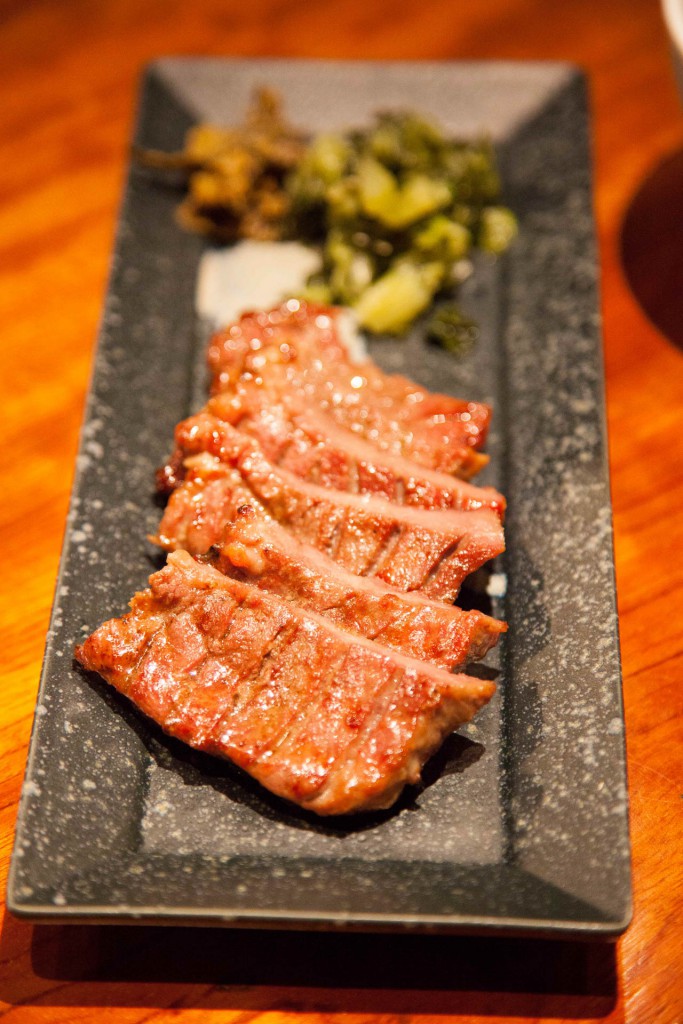 Different feeds causes different fat content and I learnt that the Japanese people prefer marbly, soft cuts better. However, there is a growing trend of Japanese who prefers grass fed beef despite the fact the meat would be tougher. It is perceived to be healthier and less fatty.

Izakaya Shuhei is a popular local tavern in Sendai. On our last night in Japan, we went out for drinks with our hosts. Life goes on. It was a cheery atmosphere and who would have thought in 2011, something devastating happened and everything was in chaos not that long ago. 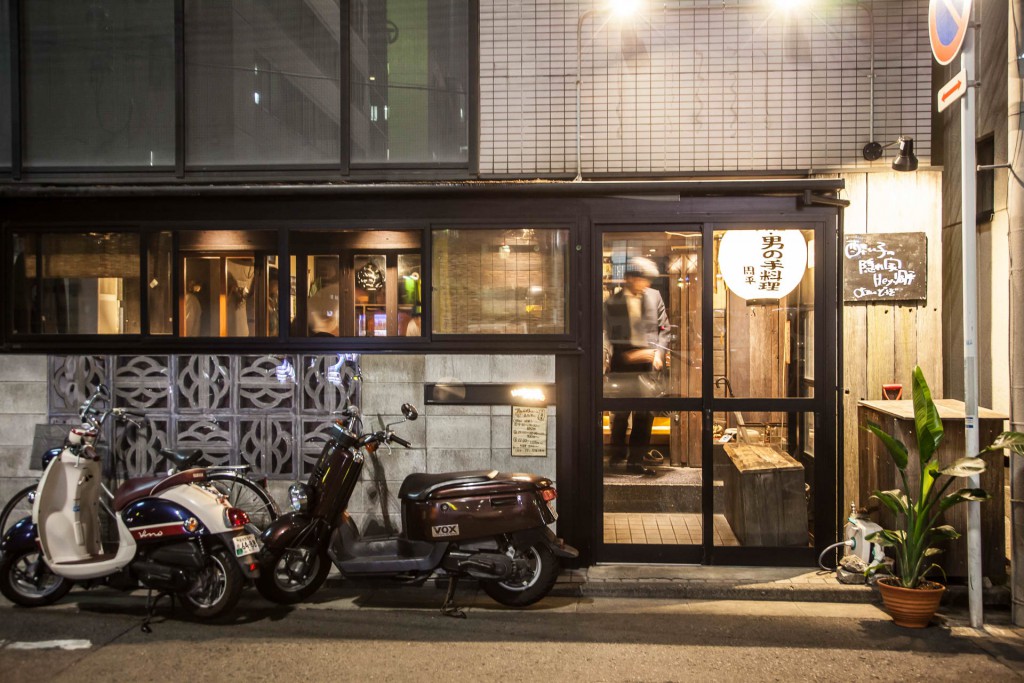 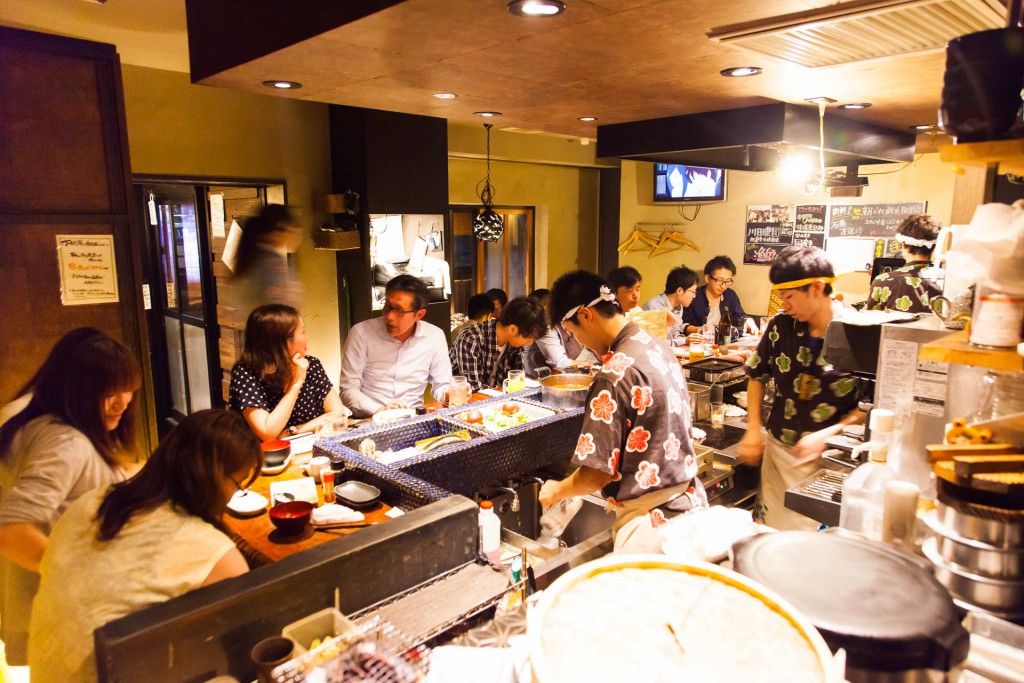 I am deeply blessed and humbled that our paths crossed in this trip to Tohoku. Tohoku needs our soupport. It has very beautiful countryside, mountains, lakes, hot springs, UNESCO registered Chusonji Temple, Kowai Farm in Iwate, the freshest seafood but most important of all, the biggest HEART! 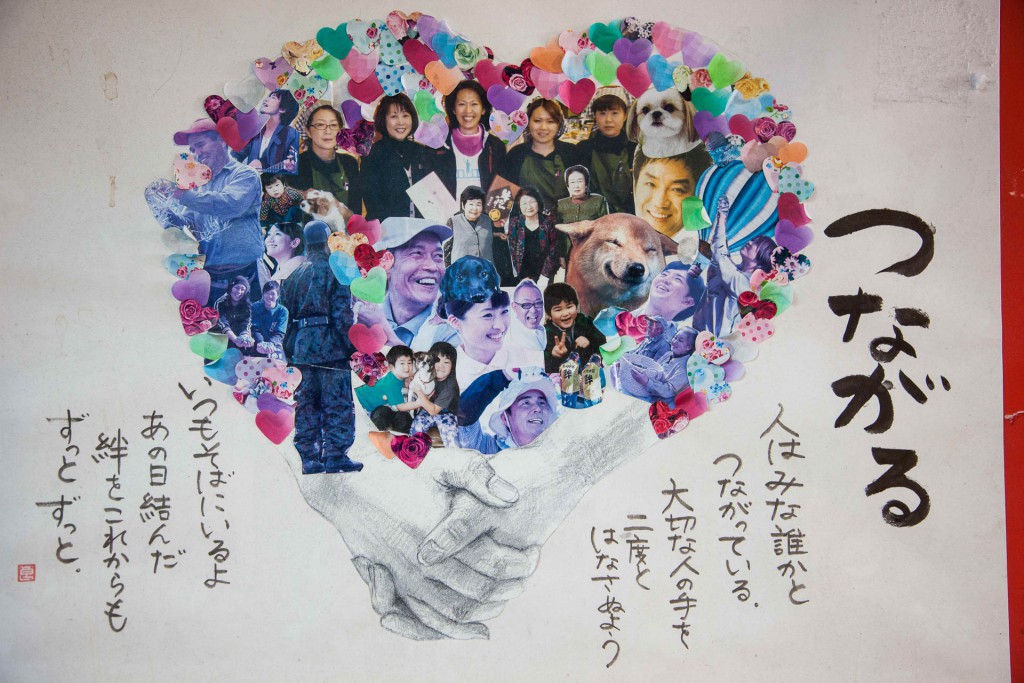 Together united, there is no problem too big!