Perth Perfect: Walking to a Different Beat at Perth

When we knew we were going to Perth for the March school holidays, we decided to put together a campaign and the souper inspirations to be from Perth. We were looking for interesting partners to work with. We chanced upon Two Feet and a Heatbeat and spoke to Ryan, the entreprenuer, the brains and the legs literally behind the brand. He suggested we do a small bar walking tour.

I know what you guys are thinking, “Perth, really? Is there even a night scene?” I had the exact same sentiments! But we decided to give it a try!

On the 6th day of our Perth trip, we were hosted by Ryan from Two Feet and a Heartbeat for our small bar walking tour. This tour was more like a history tour through the Perth district, learning Perth’s transformation from a port with warehouses to what it is today, with a new nightlife and cultural scene catering to a much more well heeled and sophisticated crowd. I have learnt more about Perth than I ever did over the 5 years I stayed as student in the 90s. The three-hour walking tour saw us visiting small bars and restaurants in the least conspicuous, somewhat secretive locales that not many know.

Ryan was a great host, introducing us to the bar operators, some entrepreneurs themselves, sharing their stories, what they do. Particularly, Canton Bar, the first bar we visited, we met Mike and Steve, the owners. Great guys! Mike worked the front of house as the resident bar tender and Steve took care of the food coming out of the kitchen. He was the resident bouncer too. The food served was pretty good, small bites, Asian tapas, I would call them! The lotus root chips were doused in five spice powder. We heard of how the place was the first Chinese restaurant in Perth, its hey days as a gambling den for high ranking officials, lawyers and judges who work in the Courts just further down the road. Now, these are stories one would never get to know if you just go in for a drink. 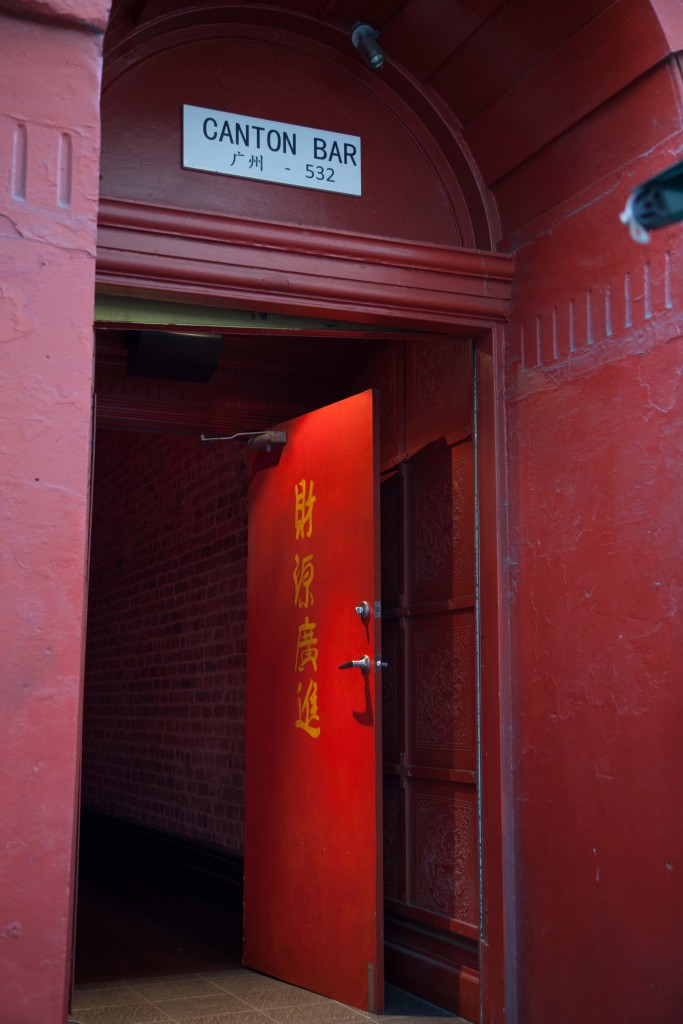 Enter the Canton Bar, previously the first Chinese restaurant in Perth! A striking red door in a striking red building 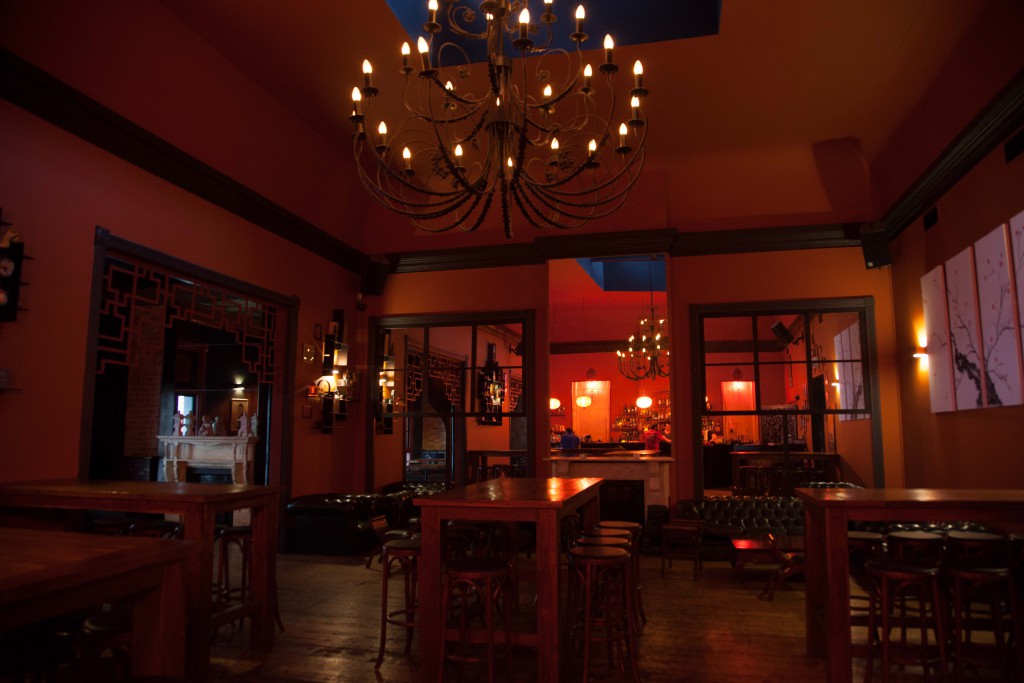 The opulent interiors that makes Canton Bar a great place for drinks and light dinner. You would not have imagined the stories that we hear about this place. The who’s who used to be diners here.

What I did not expect was the copious pieces of talent seen during our walk. We strolled through back alleys painted with street art. Little did we know, these were all commissioned by a group called FORM as part of their Public Exhibition. It was a great way to bring art to the people and make the back alleys of Perth the talk of town. 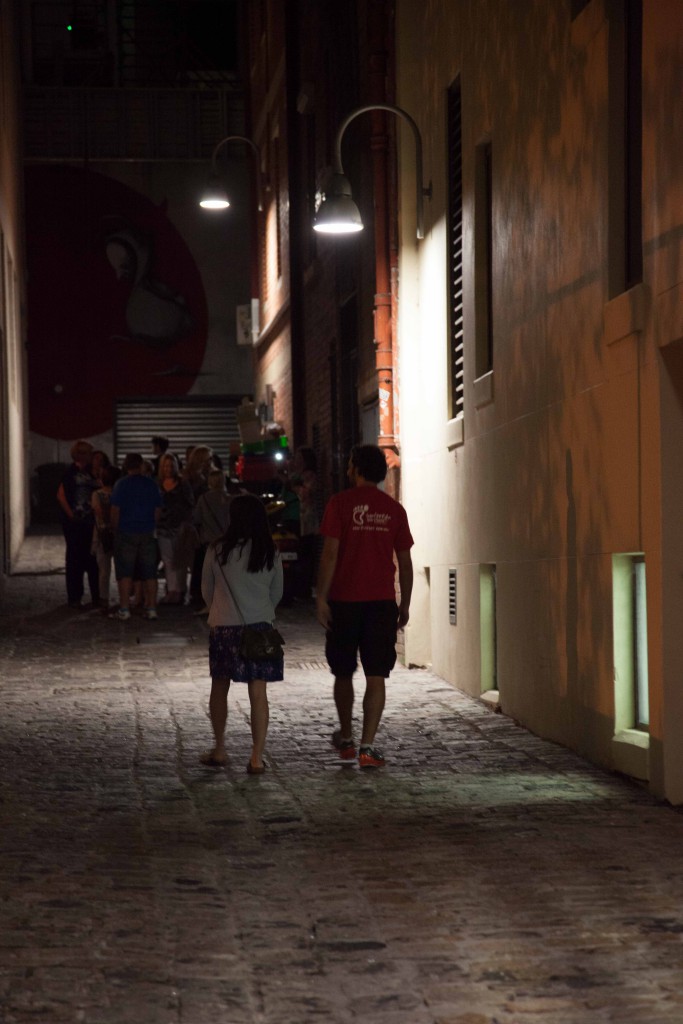 Four feet and two heartbeats, we soldier on! 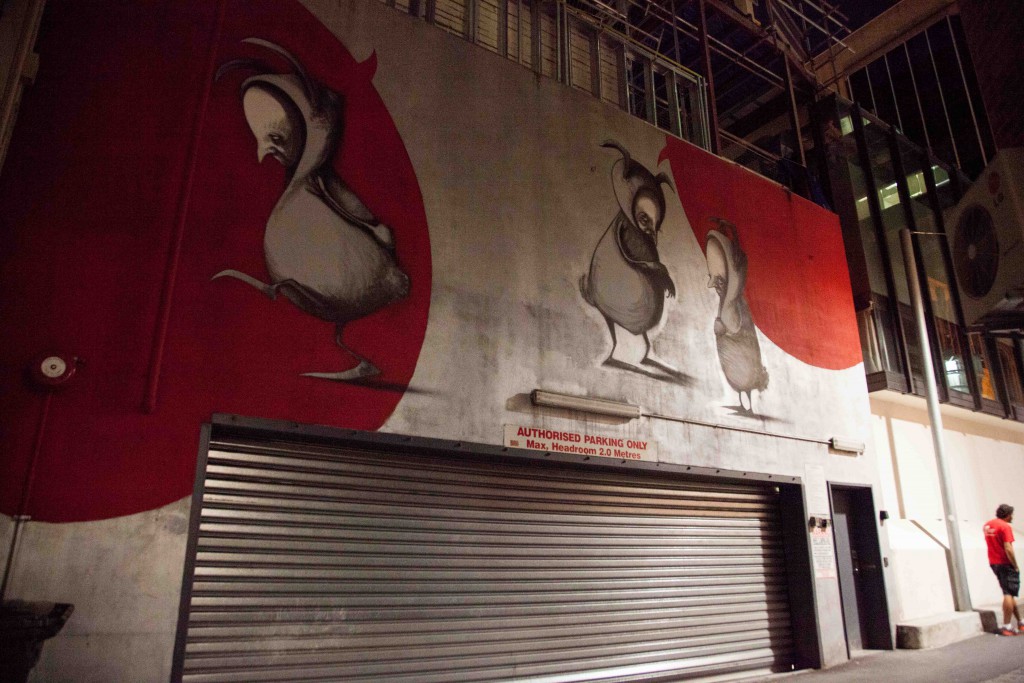 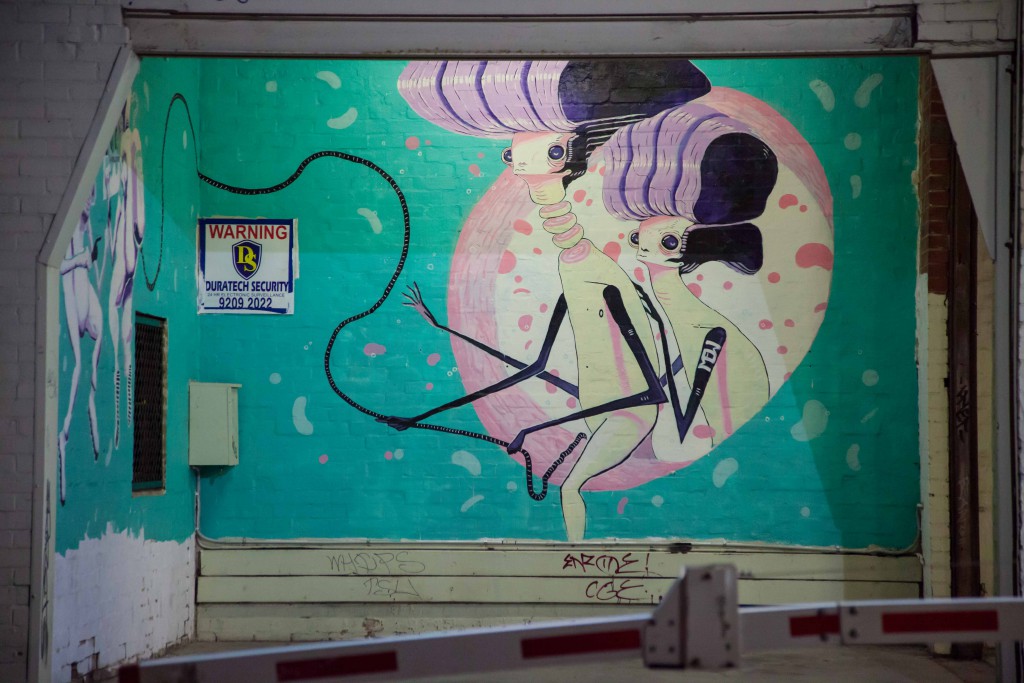 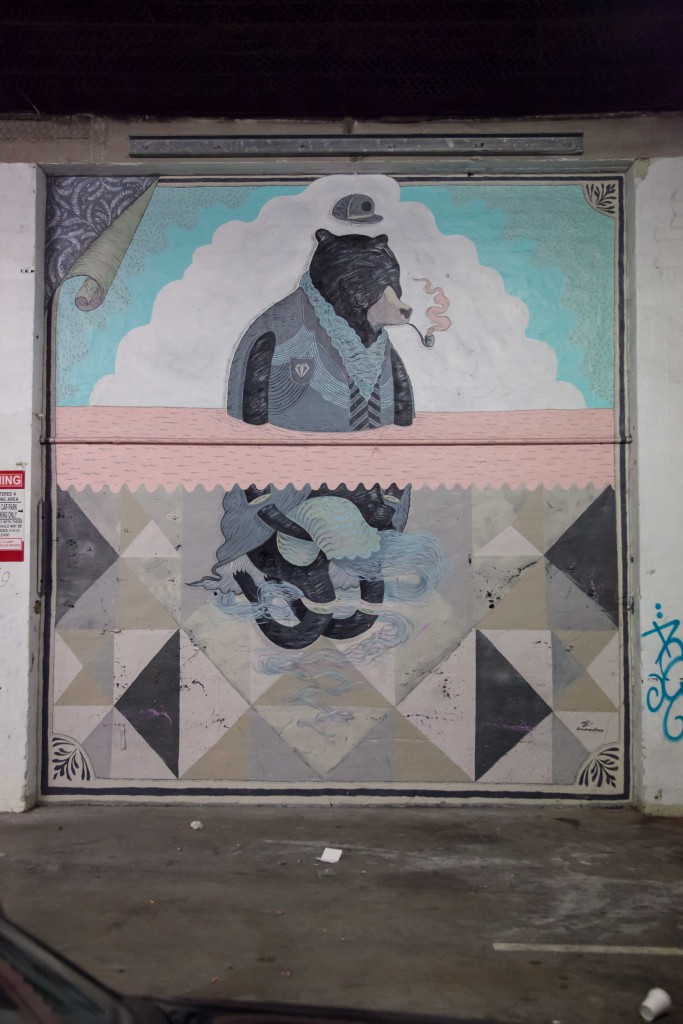 This was all found in what looked like a car park. Street art commisioned by FORM 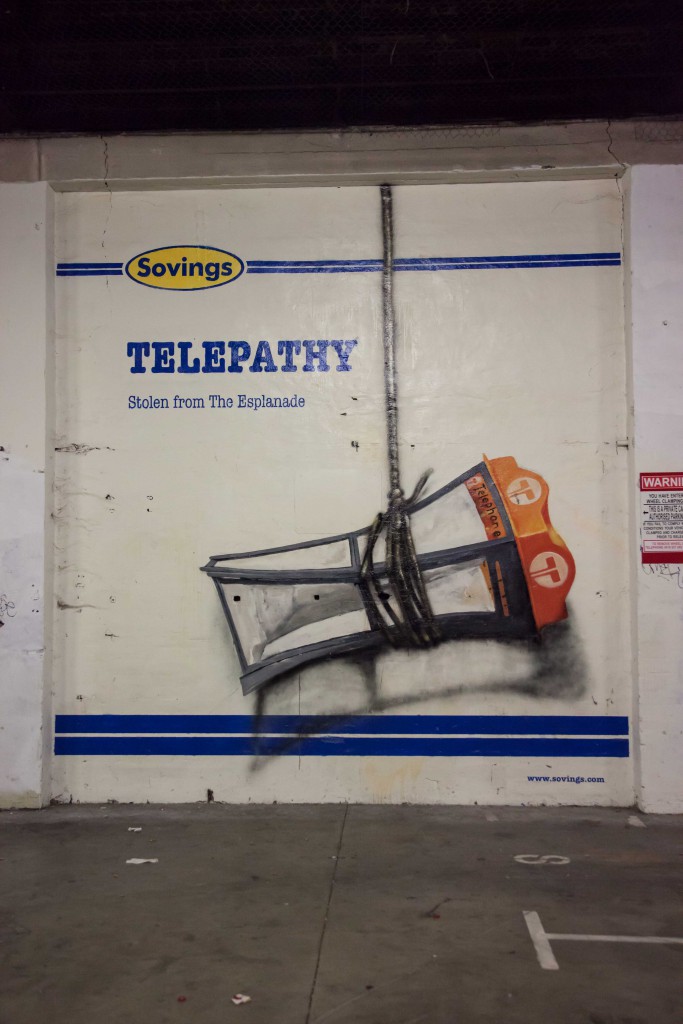 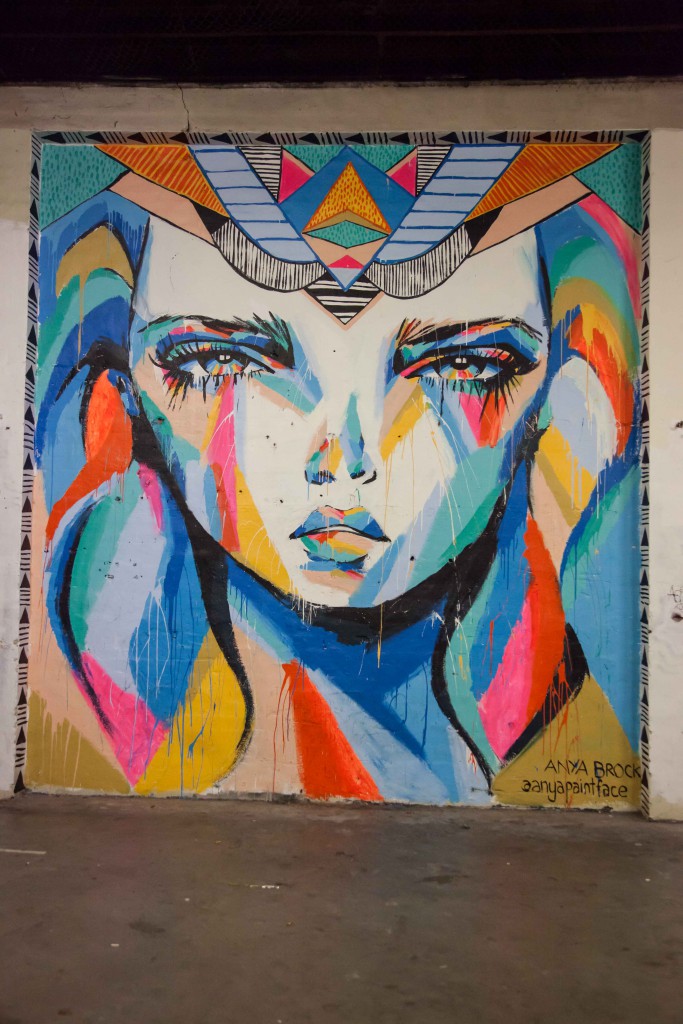 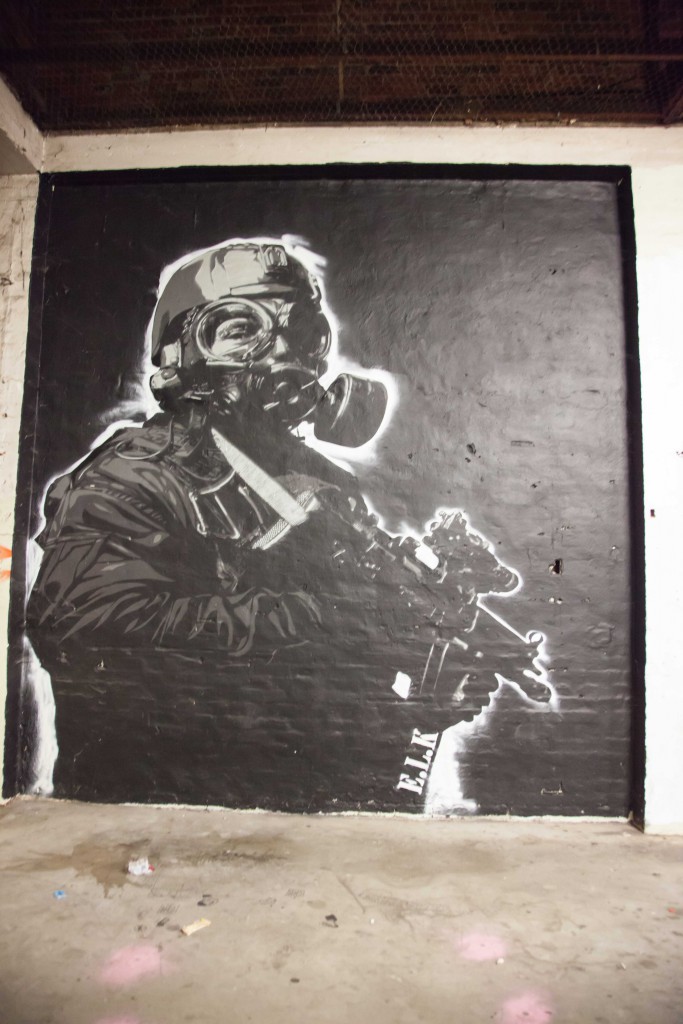 The next few street arts are found in Wolf Lane. According to Ryan, these was part of an effort to activate less used spaces and creating opportunities for food and beverage spaces, making the Perth nightlife scene more exciting. These back alleys were used to collect sewage from the buildings. With modern toilets, these back alley spaces become redundant. Hence the initiative to beautify them and create a 2nd life for them. 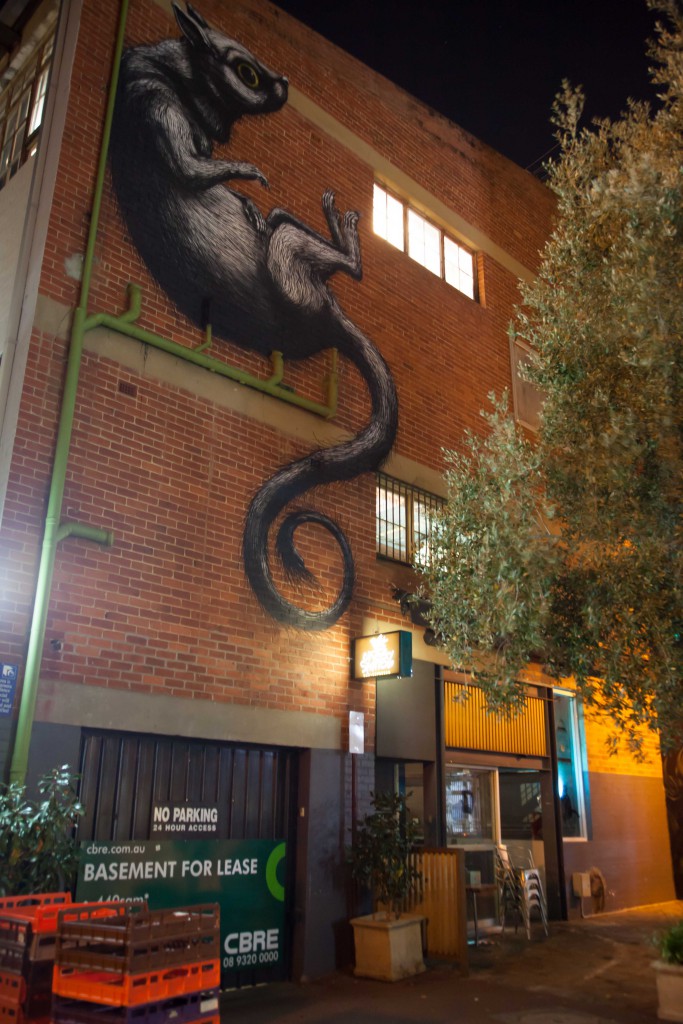 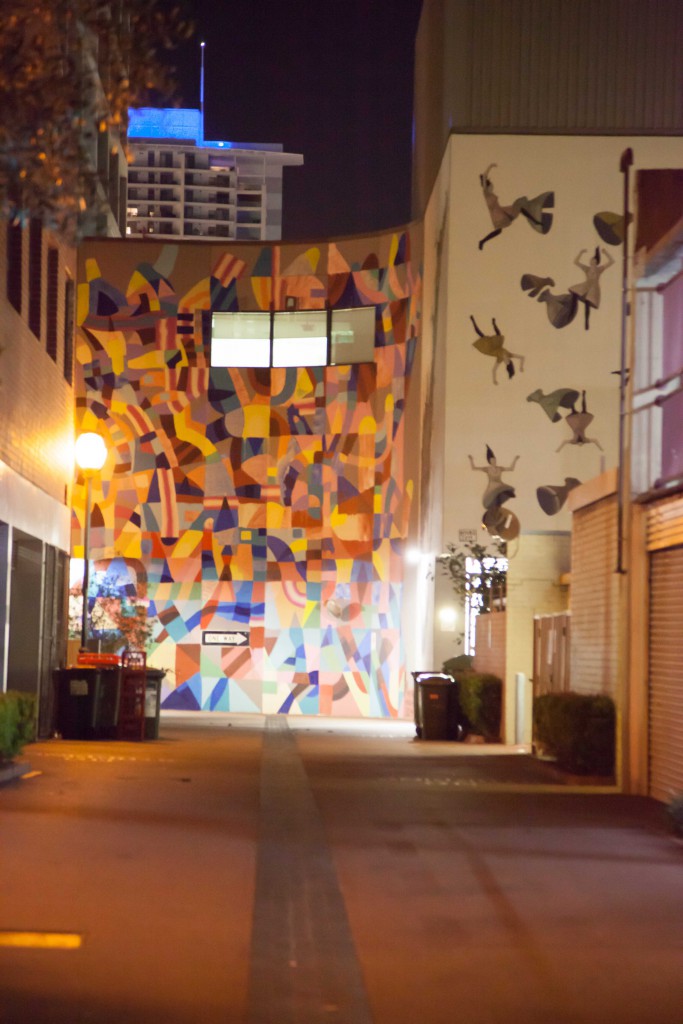 We visited whisky bars, tapas bars and I must say they were all doing pretty brisk business. A particular whisky bar, Helvetica, we visited has this huge wall on its side that can be opened up. According to Ryan, these old buildings used to be warehouses and they have this huge hoist that could lift bags of wool or wheat up to the second floor for storage before they were transported for export. Helvetica was one of the original stalwarts of the growing small bar scene in Perth. A fine selection of whiskies are available. You can buy a bottle and have it kept under lock and key for your next visit. This is probably quite common in Asia but certainly not usual in the city of Perth. 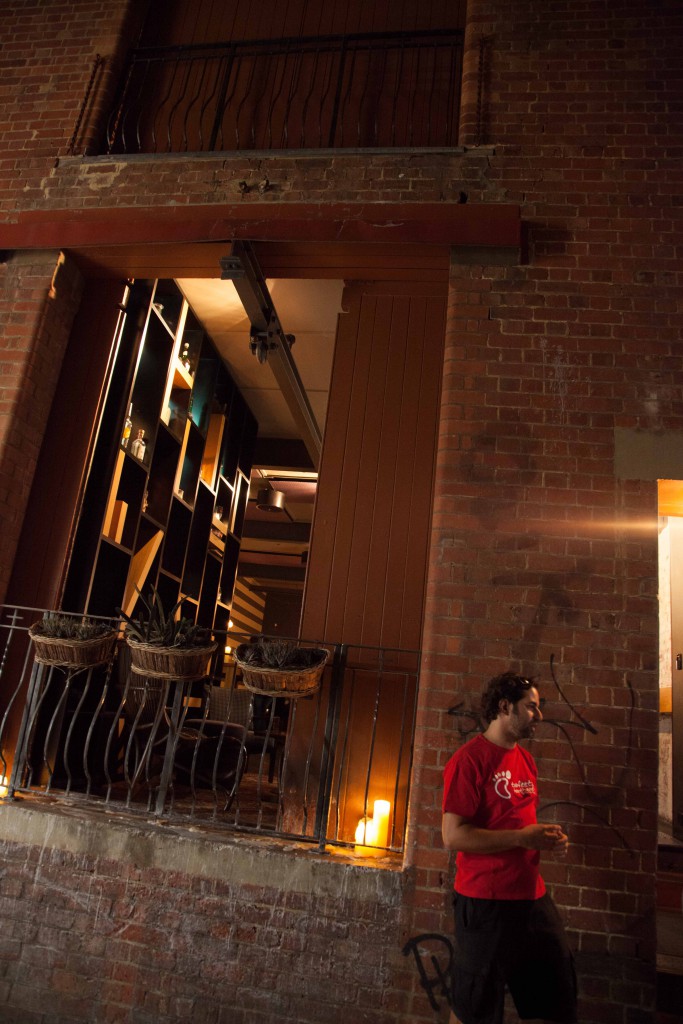 Outside Helvetica, Ryan giving me a little history lesson 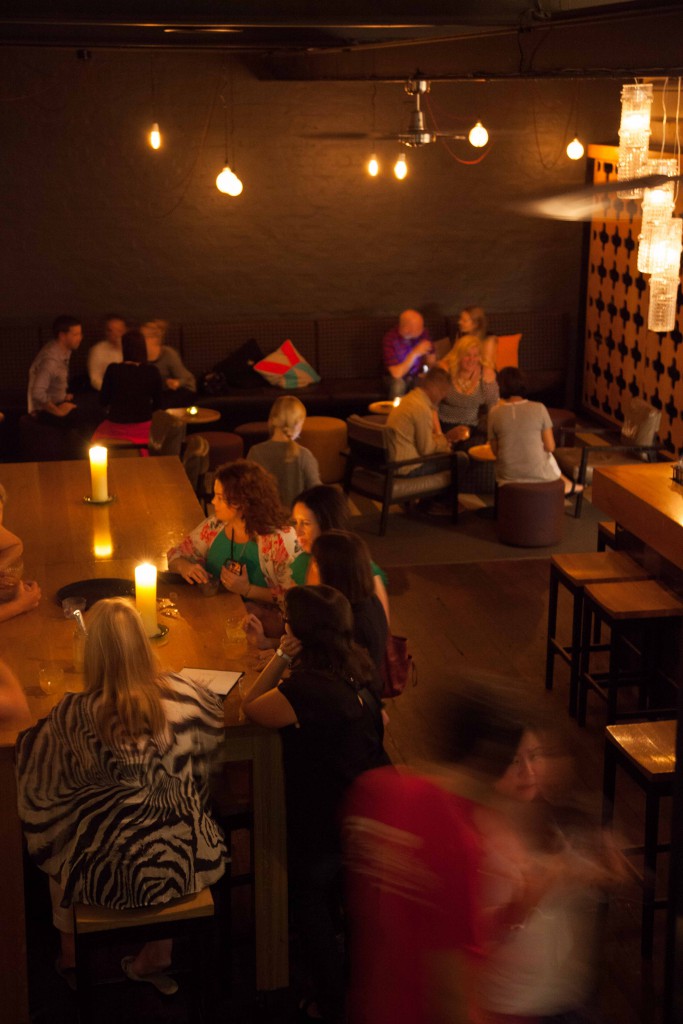 Brisk business even on a weekday evening at Helvetica

The Flour Factory was another place we visited where you could still the original beams original doors and original walls. This is an inner city public house across 3 floors of a historic 100 year old flour mill, hence the moniker The Flour Factory. It fuses together a New York Style deli with a spanish bodega style cocktail bar. There is a rooftop bar, seems really popular these days, call The Sherry, part lounge, part outdoor terrace, great chillax place. It boasts itself as an open air retreat with a lush green garden. There was an event when we were there, so we did not manage to go up to take a look. 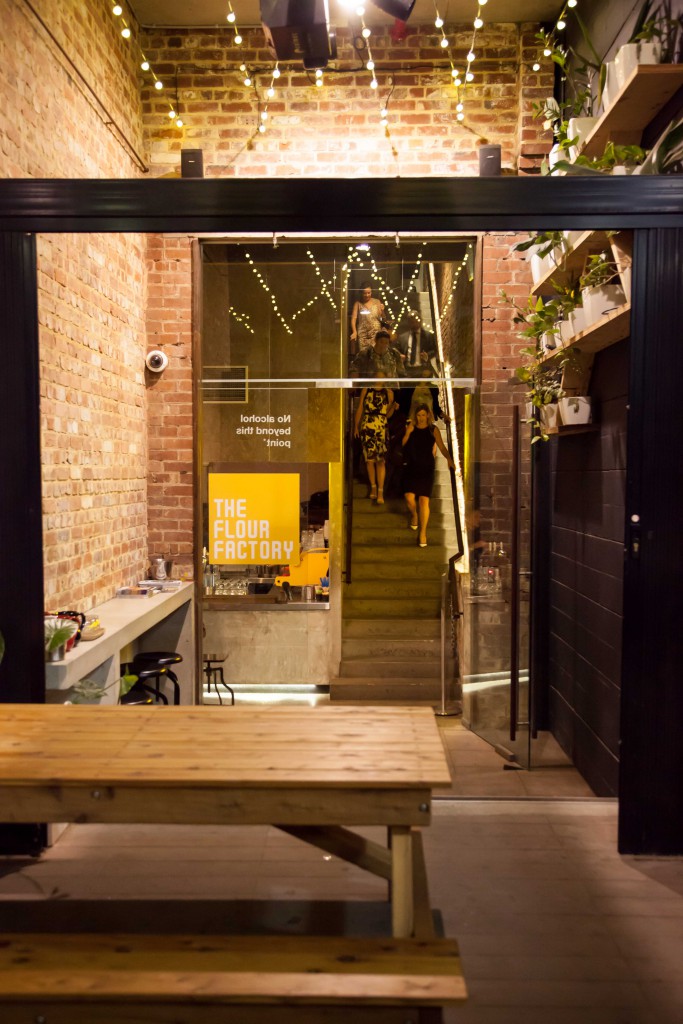 Entrance to The Flour Factory 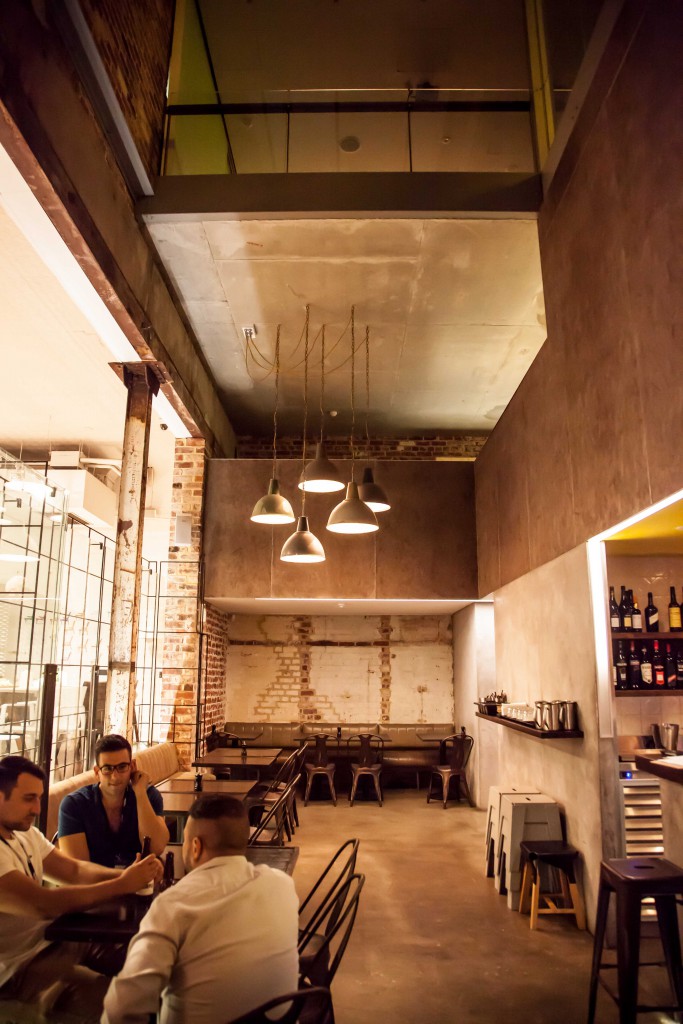 Original beams, walls can be seen 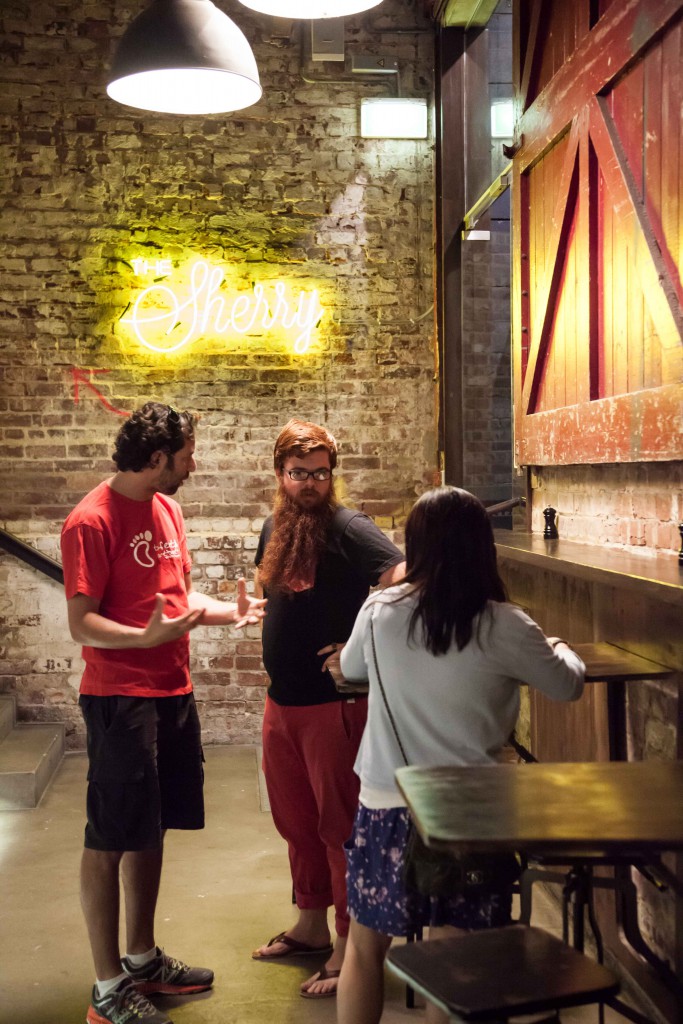 The original red door is still intact with the original walls. So casual isn’ it. One of the guys who worked there, wore slippers, red pants and a matching red beard. Loved that everything is so casual here.

The restaurant scene has gotten a lot more interesting these days with tapas bars, Spanish restaurants, a Greenhouse that recycles everything it uses, places that reminds me of Brooklyn in New York. We went in to this place call the Old Faithful, essentially a ribs, smoke and bbq place with that cool vibe. 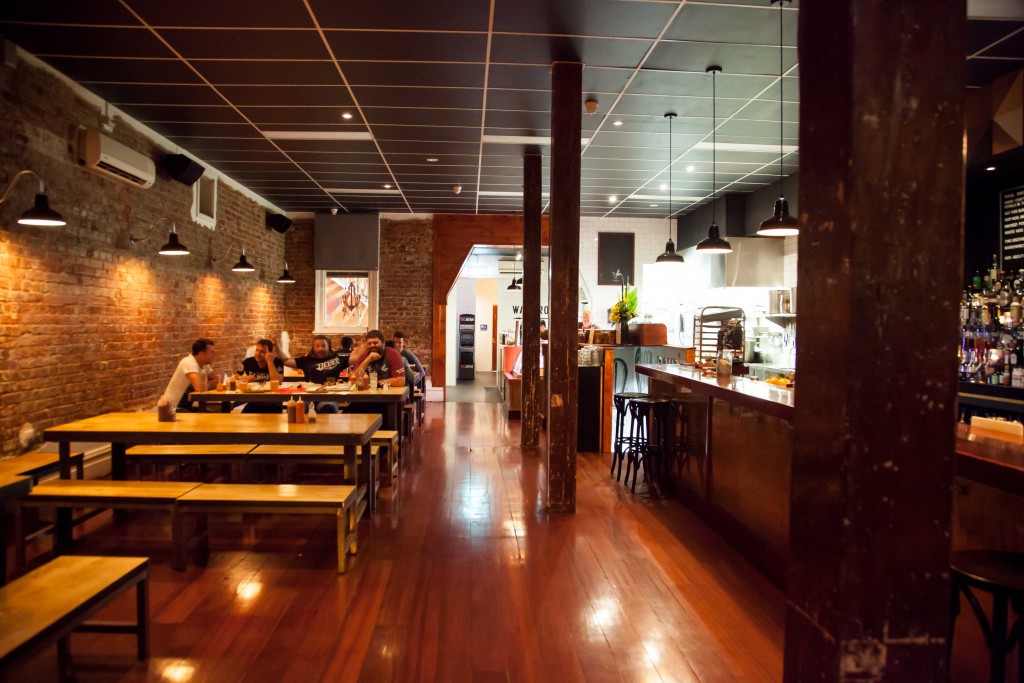 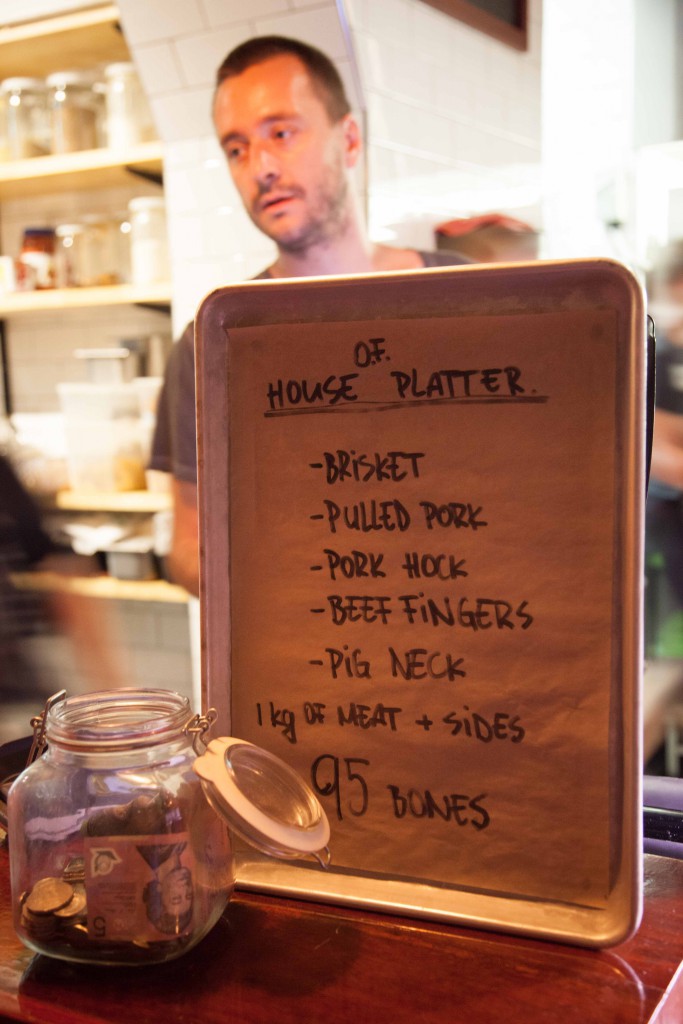 On the menu today, a house of platter with a total of 1kg meat and sides !

A new development known as Brookfield Place, located in the heart of the Perth CBD is a mixed development with offices, cool bars and restaurants in restored historical buildings.  We visited this small bar called Choo Choo’s where there is no menu. The knowledgeable and friendly bar tenders would be happy to make a drink for you based on what you like and how you are feeling for the evening. Pretty cool isn’t it? The crowd consisted of white collar executives having a drink to unwind before heading home. 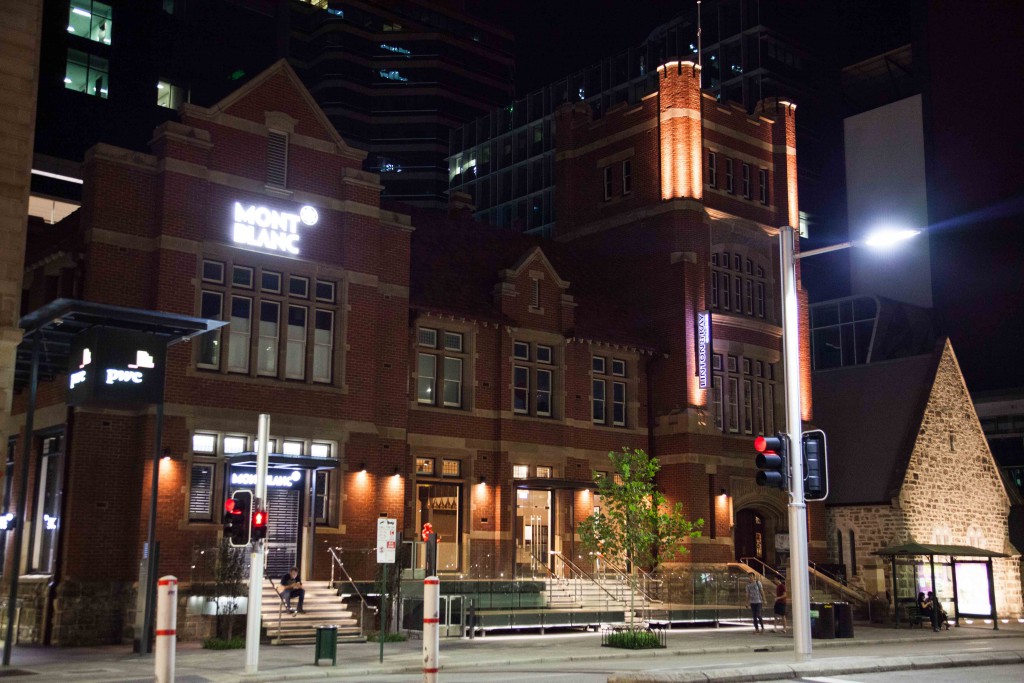 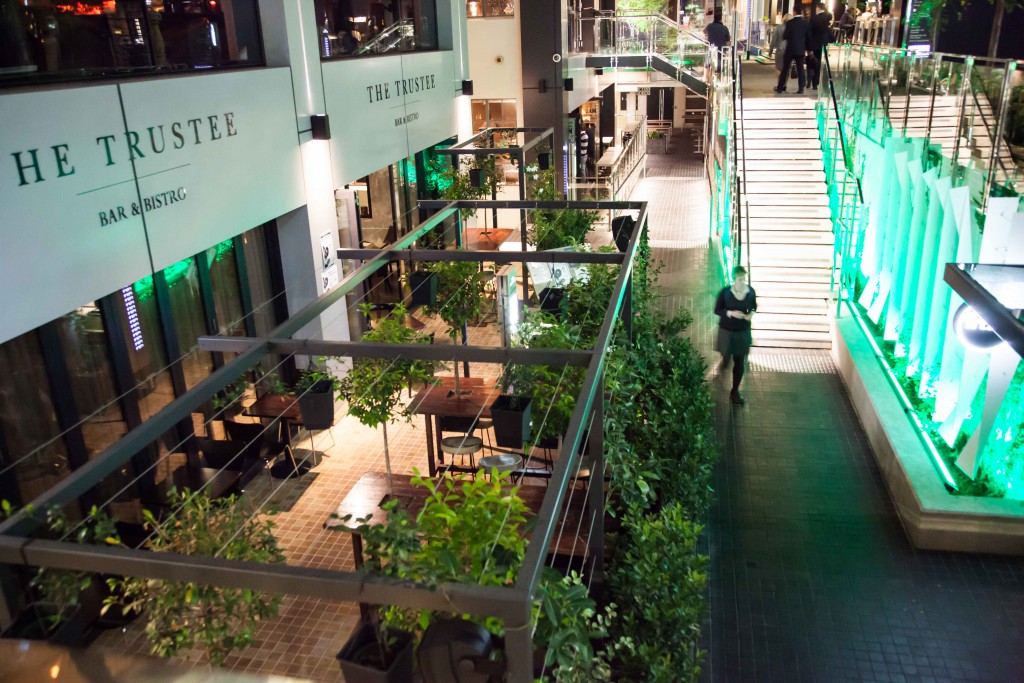 Print Hall, Perth’s first multi level dining and bar, opened in 2012. The venue pays homage to its heritage lined history. It used to be the old Newspaper House. 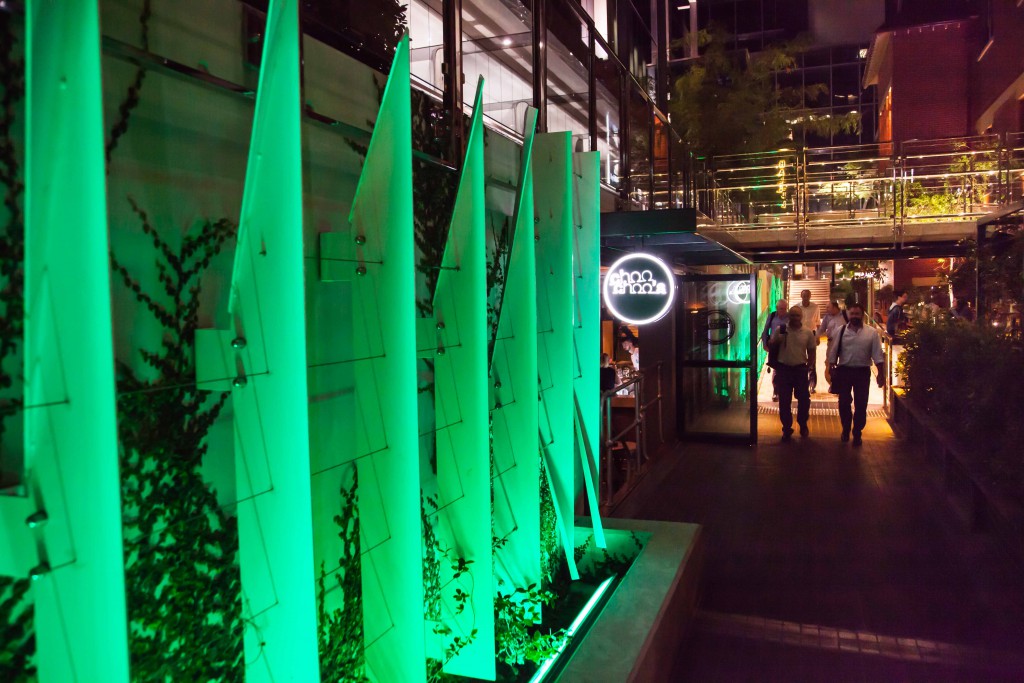 Our last stop for the evening, Choo Choo’s 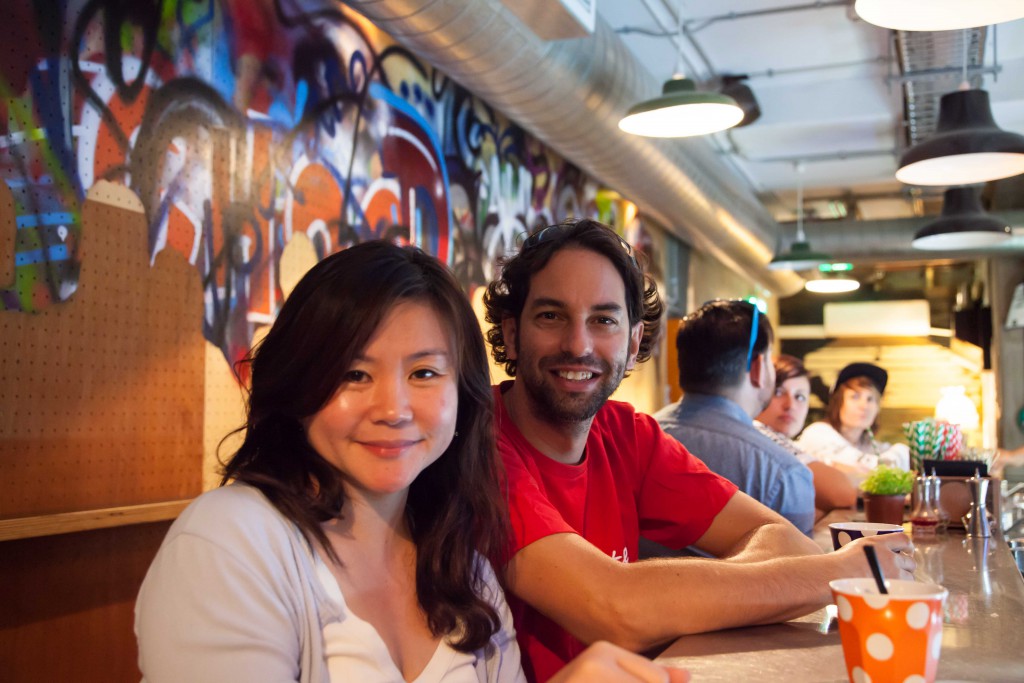 A final pic with Ryan before we call it a night!

It was time to say goodbye and to go home to the kids. The tour took approximately 3 hours. It was indeed a memorable experience to be able to explore Perth via the various nooks and crannies and shed a different light on a city I thought I knew pretty well.

Who are the good folks at Two Feet and a Heartbeat?

Established in 2008, the Two Feet and a Heartbeat tour services offer a “walk a little, eat a little and drink a little” theme. I love this tagline of theirs. The three-hour walking tour costs $50 AUD which is a pretty good deal as it comes with some food or drinks.

During the time between venues, you will be guided through sections of the city to discover other venues, thriving street art and intriguing spaces while developing an understanding of what has transformed a city centre. Do check them out!

**We were hosted for free by Ryan during the small bar tour in Perth. Ryan has also kindly sponsored 3 sets of complimentary small bar tours to the winners of our #TSSTAkeMeToPerth campaign. All opinions expressed here are my own and I am in no way influenced by any 3rd party.