by Souperchef Anna on October 8, 2015 in Bhutan, Travels

Bhutan is a land of surprises. You will probably have heard about how this Himalayan kingdom is the first country where Gross National Happiness (GNH) is measured and deemed more important than Gross National Product. Ugyen shared his experience of filling up a long survey of questions that the Centre For Bhutan Studies has designed. Pages after pages, the survey seeks to understand more about the individual’s perception of happiness in his or her religion, work and other aspects of life, and from the results, the GNH index is derived. “So, are you happy, Ugyen?” I asked casually as the car we were in jolted over rocks and mud. He responded with a smile without hesitation, “Yes, happy. Happy because of simple life. Happy from the heart,” and he thumped his chest gently. “Villagers are more happy, less exposed. But when there is modernization, they seem to want more, so they will be unhappy. Simple is good. Happy.” And Panda nodded in agreement, his t-shirt underneath his gho reads, “Gross National Happiness”.

The gate to Thimphu City, the capital of Bhutan. This capital has its fair share of firsts and surprises!

At Thimphu District, where traffic is supposed to be the heaviest across the kingdom as it is the capital where most corporations, schools and government organizations reside, we saw how orderly and efficient the traffic was. A landlocked country of about 38,394 square kilometres and 700,000 people, Bhutan boasts of being one of the two national capitals in the world with no traffic lights. The capital takes pride in its traffic police from the Royal Bhutan Police that directs and controls traffic in structures akin to toll booths. We stood on the street for a while, part amused, part impressed by the traffic cops who wave their arms with assertion at the city’s busy intersections. Ugyen shared that in 1995, traffic lights were installed as a pilot test to perceive the needs on the ground, but most failed to follow, so it was back to the trusty cops. No traffic lights, no problem. 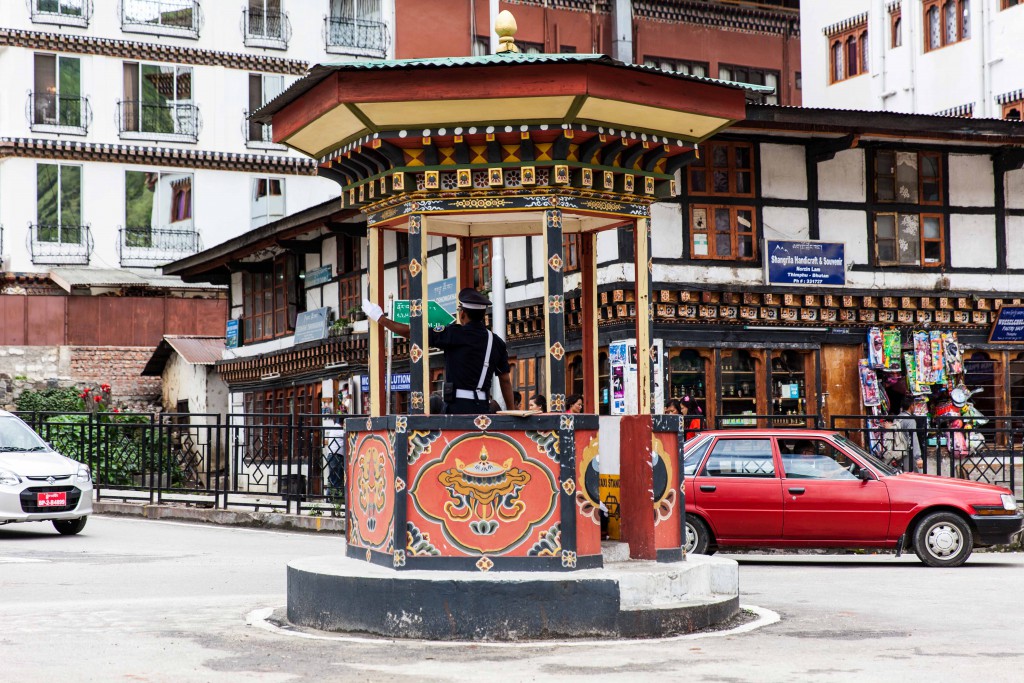 The signature traffic cop at his stand to direct traffic.

The view of another traffic policeman from the restaurant where we were dining at.

Bhutan is also currently going through a kingdom-wide road widening process in her mountains. Every day, different roads are scheduled to close for a couple of hours to allow the road widening works to be done. Understandably, the under-construction roads are not the best ones for long-distance travel now and schedules have to be worked around the road-closures as well as making allowances for longer travel time.

The roads in the mountains undergoing road-widening. Landslides are common, but accidents are few. Bhutanese are advised not to travel at night and during monsoon seasons.

I’ll be honest here that the time on the road really was’t my favourite part of the trip. I do get motion sickness from time to time, so Druk Asia has thoughtfully prepped me ahead and I brought along my trusty neck pillow and my travel companions had stashes of sweets and motion sickness pills. Most of the trip, I had my eyes closed, letting my circadian rhythm sync to the jolting and bumping of the car on the hard road. Panda, our ever alert driver, honked gently round the bends as a signal to oncoming traffic. He slowed down to the side each time he spotted a bigger truck. In fact, the drivers we met in Bhutan were all gracious and patient, none of the frantic frenzy I’m rather accustomed to back home.

It’s quite common to see the wild cattle chilling on the mountainous roads like this. Clearly they don’t have the trepidation of falling off the roads that I had!

Here’s one little tip – don’t look down on the sides of the roads! The sides go way way way down to the bottom of the mountains, or to peaks of trees. I think my heart dived a little when our car first wound round the treacherous roads. So, take my word, don’t. Drivers there are well-primed for the hard roads and well-planned road travels by trusty agencies like Druk Asia are generally very safe, albeit long. Traffic accidents aren’t common in Bhutan, despite the mountainous road conditions. Our greatest misadventure was getting stuck in the mud, and even then, workers widening the road and the nearby drivers got together in a heartbeat and before we could even fret, our car was lifted up and out, and all was good in no time. Seriously, nothing seems to get the Bhutanese in a frenzy.

Their calmness extends to the skies as well. Do you know that the international airport of Bhutan in Paro has the unenviable reputation of being the most dangerous airport in the world with her surrounding dense terrains and cloudy conditions? Only a grand total of eight pilots are certified to fly into this airport. Pilots of domestic flights are also specially trained to navigate and fly within Bhutan only, and we heard from Ugyen that these pilots command a lot of respect within the aviation industry as the thick heavy clouds in seemingly impenetrable skies and the notoriously short runways of the domestic airports make control of the aircraft truly challenging.

Spotting our plane flying in to Bathpalathang Airport at Bumthang! Almost all the passengers were out to welcome the flight. It was quite a sight!

Waiting for the plane to make a turn back for us. To be honest, I didn’t mind the wait. The airport was simple but so scenic.

Hello, beautiful skies of Bhutan. In the brevity of the short domestic flight from Bumthang to Paro, we even had snacks and drinks.

Domestic flights are also known to be delayed or even cancelled, mainly due to the demanding weather conditions in the high altitudes. Our flight from Bumthang to Paro was delayed for an hour, and we were all praying hard that we would be able to ascend to the breezy skies for a 35min flight rather than eight hours of jolting on the roads. All around us however, the Bhutanese were a picture of calm, totally unfrazzled. They took to the open carpark outside, hands tucked into the pockets of their gho or kira as the wind chill brought the temperature down to a summer low. Children were huddled close to their parents, drivers gathered around for a catchup. Patience, happiness in the moment – that’s what I saw, and I loved it.

We also realised how we have not seen anyone smoke throughout our trip. It was then we realised that Bhutan is the first nation in the world to have successfully banned the sale of tobacco countrywide. While Bhutanese are still allowed to smoke, they are not to do so in public. Bhutan is also one of the last nations in the world to introduce television. We heard about how a Singaporean man went from lodge to lodge, hoping to find one that has a tv in the room, only to return to the original lodge in disappointment. “No TV in any lodge in the whole of Bumthang?” were his exact words, so recalled our hosts. Ugyen was quick to add, “TV ok. Singaporeans just need two things – hot water and internet! ” We are getting to be quite predictable travellers!

The unspoiled gem in the Himalayas that is Bhutan.

One of the world’s most fabled destinations, there is so much I have learned from this country that sticks by her principles to do what’s good for her people, for mother nature. So much gentleness in the way the day to day challenges are handled, so much pride they have taken to keep the kingdom an unspoiled gem in the world of commercialization. Thank you for showing me that a problem is only a problem when you let it be.